November 28 2017
100
It seemed that this girl was born for a bright, happy life, full of creative success, fame, fans. However, her life was really bright - it was even brighter than originally thought. And creative successes in her were. Unfortunately, life was too short - just 20 years. And the glory turned out to be posthumous. 24 November marked the 75 anniversary of the death of Marionella Vladimirovna Koroleva, better known as Gulya Koroleva. 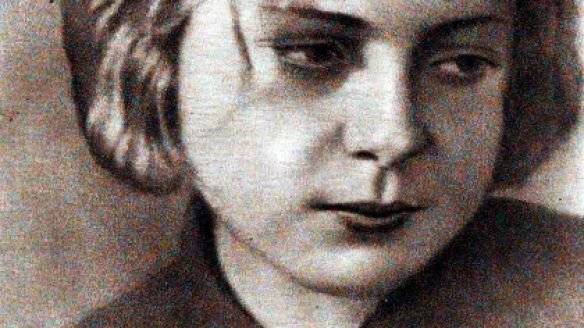 A girl was born in Moscow 22 September 1922. Her father was director Vladimir Danilovich Korolev. Already in 4, she starred in the film "Kashtanka". Parents saw her actress. Friends who have been in the family, touched by the girl’s lively, restless character and her pretty appearance, said: “This is not Koroleva, this is the queen of the ball!” And sometimes, when the child was too naughty, she was not called Marionella, but Satanella .

However, the strange, exotic name Marionella did not stick in the family. She was given a home nickname - Gulya. No one knew then that under this name she would step into Immortality ... Her happy childhood was marred by the divorce of her parents in 1932. She and her mother moved to Kiev. She missed her father, constantly corresponded with him.

In addition to "Kashtanka" (1926), Gulya starred in five more films. One of them is the “Ryazan women” (1927). But it was especially difficult for her to play the role of the peasant daughter Vasilinka in the film “Partisan’s Daughter” (1935), dedicated to the struggle of the peasants with their fists. For this role, the young actress had to train a lot, including riding. But on the other hand, the girl was generously rewarded for her work - she was given a ticket to Artek.

In 1936, Gul is shot in two more films - "Sun Masquerade" and "I love." But she, despite the desire of parents and success, did not want to be a professional actress. In 1940, she entered the Kiev Irrigation Institute.

Soon the girl married. There is disagreement over who her spouse was. In the book “The Fourth Height” by Elena Ilina it is stated that his name was Sergey. However, most researchers are inclined to think that Gulya was married to Alexei Pyatakov - the nephew of the disgraced people's commissar Georgy Pyatakov, who was shot in 1937 year. If this fact is true - then this is another stroke to the fate and character of the heroine. At first, she was not afraid to marry a relative of the “enemy of the people”, and then, when at the beginning of the war he was sent into exile, she did not harbor personal insults at home (like many), but went to defend her.

Anyway, the question of who her husband was is not the most important ... The main thing is what she had to do in the future.

It is difficult to say how the fate of a talented girl would have been. Perhaps she would still want to serve art and become one of those great Soviet actresses she loves so much - so far! - our people. But 1941 came the year that brought the war.

Gulya along with her mother and stepfather evacuated to Ufa. Her son Sasha was born there. He was given a cute family nickname - "Hedgehog." But she didn’t have a chance to raise a child - Gulya rushed to the front. And for the sake of the country, and for the sake of her little son, the separation with which was incredibly difficult ... She was dissuaded by her relatives and friends, then she did not want to be sent to the front line - but she sought precisely to be in the heat of the moment, where the most difficult and dangerous .

Koroleva achieved that she was appointed to the medical battalion of the 780 rifle regiment of the 214 th rifle division of the 24 th army. In the spring of 1942, she headed for Stalingrad.

She wrote to her father about how she was at the front — somewhat mundanely, as about normal work: “We fought for the same height. They fought a day, occupied it several times and retreated several times. Hard there German sat down. I went to pull out the wounded - close to the Germans lying. The Germans noticed, they decided to take it alive. I crawl and they crawl, and they gave me a machine-gun fire veil behind me so that they would not come to my aid. Back to crawl late. Ahead of the wounded and the Germans take the ring. I took a grenade in my hands, decided that I would let me in and throw grenades, even if I’d interrupt them more ... Then I killed two Fritzes. ”

In another letter, she told in pain how she bandaged a wounded six-month-old child who had killed her mother: “I bandage him, and he looks at me with such large, suffering eyes and does not cry, but only sighs heavily. I bandage it, and tears pour down at my very eyes. ” Surely in those moments she was thinking about her son, whom she had to leave because of the war.

It was the day of her feat - November 23 1942 of the year. It was a fierce battle for the height of 56,8 near the farm Panshino. In this battle, Gulya saved fifty wounded, carrying them from the battlefield. And when the commander died, he rose to his full height and led to the attack. Although by that time she was already injured.

Wounded, the medical instructor of the 214 Rifle Division, Gulya Koroleva, fought heroically. Bursting into a fascist trench, destroyed the Nazis with grenades 15. Together with a handful of fighters held until reinforcements arrived. Unfortunately, the next day, November 24, she passed away from her wounds.

Her feat is immortalized not only in books (the most famous of which is the aforementioned “Fourth Height”), but also in films. Unfortunately, now it’s difficult to watch films because of copyright issues, and the book on which a whole generation of Soviet children was raised was not published for many years due to the same problem.

The streets in Volgograd (Stalingrad), Mezhdurechensk, and Dnepropetrovsk are named after Guli. There was a street named after her in Kiev, but, unfortunately, it was not preserved. Moreover, it happened long before the restructuring and the Maidan - just the street was small and disappeared during the construction of one of the big stores ...

In addition, the name of the heroine is immortalized in the name of the village in the Soviet district of Volgograd, as well as the children's camp in the Volgograd region. On the territory of “Artek” there is a monument called “They were Artekites”, where her last name was carved ... January 9 January 1943, Gulya Korolev was posthumously awarded the Order of the Red Banner.

No matter how hard they tried to distort the heroic deeds of Stalingrad, even putting pressure on pity for the enemies, this will not be possible. And young people need not be told about any Hans or Fritz, but about heroes who defended their homeland from invaders.

Ctrl Enter
Noticed a mistake Highlight text and press. Ctrl + Enter
We are
King of the Ring. Nikolai Fedorovich KorolevQueen of the episode. Faina Georgievna Ranevskaya
100 comments
Information
Dear reader, to leave comments on the publication, you must to register.