November 29 2017
7
T20 (Medium Tank T20) - a series of experienced medium tanks, which were developed in the United States during the Second World War. The program for the development of a new medium tank, which would be superior to the German counterparts encountered by the American army in battle, was launched in 1942. At the same time, a new tank was supposed to replace the M4 Sherman medium tanks launched into serial production. The development program for the new medium tank under the designation T20 continued until the end of 1944, but was eventually closed in favor of more promising projects.


The first two prototypes of the new medium tank T20 were ready in May-June 1943, at the same time two prototypes of the improved version were created under the designation T22. Their tests went to the end of the 1944 year, while the US military found the tanks inappropriate to the requirements of the armed forces. Also in 1943, in the USA, another version of the medium tank was developed under the designation Т23. This combat vehicle was equipped with an electromechanical transmission. After successful testing, this medium tank was put into mass production, but after further testing and the start of operation it was also rejected by the American army, and the release was limited to an experimental batch consisting of 10 tanks.

Despite the fact that the medium tanks of the T20 series remained experimental machines, American engineers were able to test a number of technical innovations for them, some of which later migrated to production tanks. In particular, the T22E1 tank became the first military vehicle in the world to receive an automatic loader. Further work on the development of the T20 series in 1943-44 led to the creation of the T25 and T26 tanks, which in turn became the M26 Pershing tank launched into mass production in November 1944. On a limited scale, M26 tanks managed to take part in battles with German troops in Western Europe in the spring of 1945. 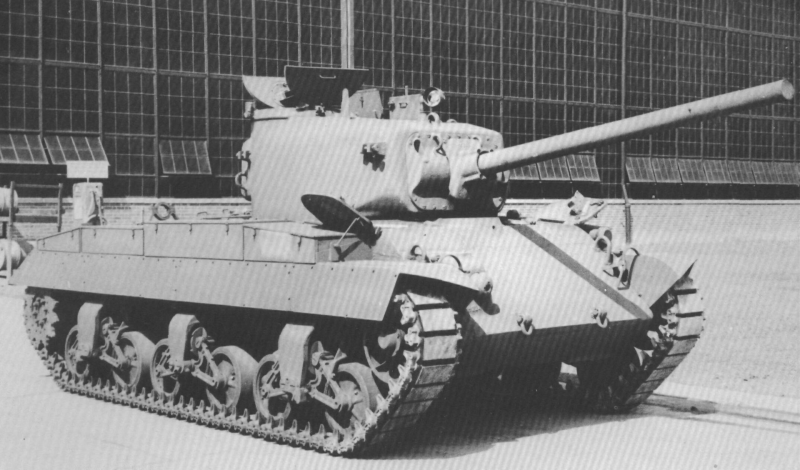 Barely mass production of medium tanks M4 "Sherman" reached the planned volumes, as the American designers began to create a more powerful combat vehicle. The new tank had to stand on equal footing with new models of armored vehicles in Germany. In this case, the serial "Shermans" had a lot of flaws, the main ones were: large dimensions, which seriously hampered the camouflage of the tank on the battlefield, as well as the lack of combat power, primarily weak artillery weapons.

Already 25 May 1942, the Department of Supply and Artillery Technical Service approved the project to create an improved version of the tank "Sherman", originally a new combat vehicle designated as M4X. The technical requirements for the new tank indicated that its mass should not exceed 32 US (short) tons (about 29 000 kg), and the thickness of the frontal armor should be 101,6 mm. The tank was supposed to get a power plant that would provide it with a maximum speed of 25 miles per hour (40 km / h). The main innovation planned was to install an 75-mm cannon on the tank, working with an automatic loader.

The early version of the medium tank T20 still quite resembled the exterior of the M4X, but in the course of work, its hull had to be redesigned, significantly reducing its height. Also, the designers reconsidered the issue of the “classic” suspension of the M4 tank, which assumed the presence of three carriages with shock absorption on the horizontal springs. In the course of all the works, by the end of 1942, the appearance of the new medium tank was formed, which was completely different, although in a number of elements of its design the influence of the Sherman tank was still felt. Since then there was still no clarity in the choice of weapons, only the combat mass of the new combat vehicle was strictly stipulated, which should not exceed 30 tons. Initially, the M20А1 long-barreled three-inch gun with the characteristic T1 wedge-shaped mask was going to be mounted on the medium tank T80, however, in May 1942, when the model was presented, the designers were inclined to install the T79 mask. 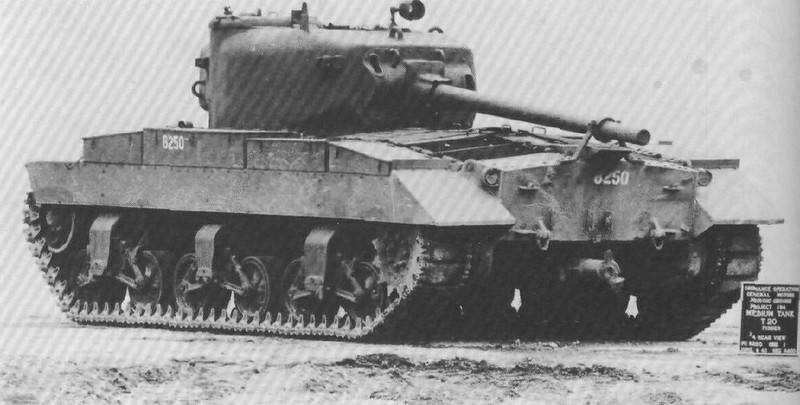 T20
The hull of the new tank was welded and assembled from sheets of rolled armored steel, the thickness of the sheets was differentiated. Since the strengthening of the frontal armor of the hull to 101,6 mm obviously led to a serious weighting of the combat vehicles, a decision was made to reduce the thickness of the armor to 64 mm. At the same time, the upper front hull sheet was installed at an angle of 47 degrees, the lower one - 53 degrees. The hull sides were made of armor plates 51 mm thick, they were installed vertically, that is, they did not have rational tilt angles. The stern bronelist was set at an angle of 10 degrees and had a thickness of 38 mm.

The layout of the hull of the T20 was classic. In front of the case was a control compartment. On the left side, the driver’s seat was equipped, on the right side, his assistant, each of them had his own hatch with armored hulls reclining to the sides. In the middle part of the tank hull the combat compartment was located, here was the cut-out for turret chase. In the stern of the hull was installed engine compartment. All three prototypes of the T20 tank were fitted with a Ford GAN 8-cylinder carburetor liquid-cooled engine, which developed the maximum power of the 500 hp. A hydromechanical transmission Model 30-3OB with a three-stage planetary gearbox (forward speed 3 + 1 back) was installed on all tanks. The tank crew consisted of a 5 man: a driver and his assistant, a tank commander, a gunner and a loader.

On all three models of the T20 tank, the armament was located in towers with a unified shoulder strap, while the thickness of the tower’s forehead reached 89 mm, the stern and sides - 64 mm, the roof of the tower - 19 mm. The M76A1 1-mm gun was located in the frontal part of the turret, the tank's auxiliary armament consisted of three Browning M7,62A1919 4-machine guns (masked, course and anti-aircraft guns). Inside the tank, one 11,43-mm submachine gun Thompsom M1928A1 was also located inside the tank. On the T20-3 model, a large-caliber 12,7-mm machine gun M2HB was used as an anti-aircraft gun. 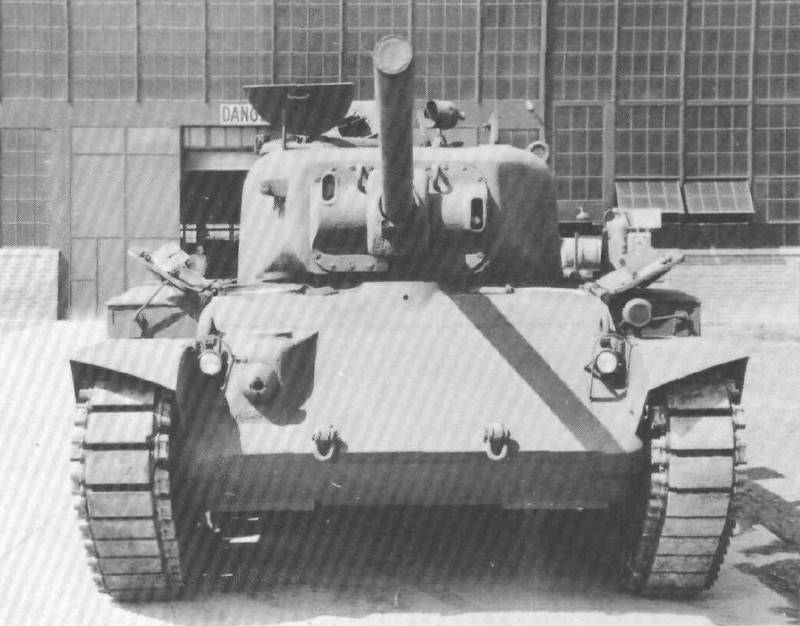 T20
The individual differences between the prototypes of the T20 medium tank consisted in the armament and type of running gear. The first version of the T20 was to receive an 76-mm gun, the M1-1, with a barrel length 40 of calibers, the gun was equipped with a single-plane stabilizer. The corners of the vertical guidance of the instrument ranged from -10 to + 25 degrees. The aiming equipment consisted of the M4 periscope sight and the Т92 telescopic sight. The chassis, as applied to each side, consisted of three dvuhkatkovyh carts (6 rubberized rollers) with shock absorption on horizontal springs, three supporting rollers, the front guide and rear drive wheel. The rubber caterpillar of the medium tank T20 was recruited from tracks like Т48 or Т51, having a width of 421 mm.

The project of a medium tank under the designation T20Е1 provided for the use of a similar suspension - like HVSS (Horisontal Volute Spring Suspension). At the same time, this version was distinguished by the presence of 75-mm guns with automatic loader. The most progressive was the design of the T20EX2 tank, in the undercarriage of which six rubberized road wheels were used, which had an individual torsion suspension, as well as five supporting rollers (applied to one side). The transition to this type of suspension was outlined by representatives of American armored forces in February 1943. At the same time, the armament of the version of the medium tank T20EX2 corresponded to the first model Т20.

The construction of the prototype experimental medium tank T20, which received the 30103302 serial number, was completed by Fisher in June 1943. After construction, the tank was sent to the General Motors Proving Ground test site, where the novelty was tested. Here, because of the problems that have appeared in the work of the transmission, the tests of the new combat vehicle dragged on, because of this, the tank reached the Aberdeen range only in February of the 1944 year. Much to the disappointment of the developers and the manufacturer, not all defects of this model were eliminated in a timely manner, therefore, work on the T20 model was stopped. However, developments in it in the future were used by American designers when designing the T22EX1 tank. At the same time, the design of the medium tank T20EX2 also underwent a number of changes, as a result, the tank reached the customer already under the designation T20EXNNUMX. The prototype in this version was ready for 3 July 1 of the year. There were even more problems with the average tank for the American army than with the T1943, so almost immediately the T20EX20 tank was returned to the factory for further improvements. In the end, it was used part of the details from the first prototype. During the comparative tests of the new tank with torsion bar suspension showed better driving performance compared with the serial medium tank M3. It was noted that on the T4-20 model, work should be done to strengthen the mounting of shock absorbers. 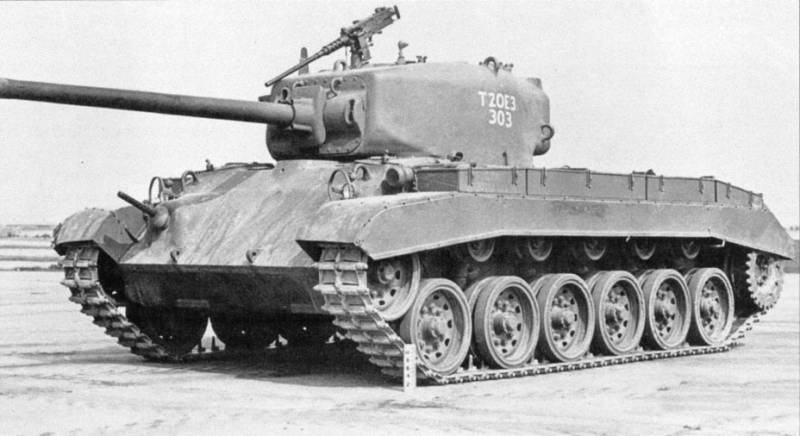 Т20Е3 with torsion bar suspension
After passing the preliminary tests of the tank at the site of General Motors Corporation and eliminating the identified shortcomings and flaws, the tank was submitted to state tests, which were conducted at the Aberdeen range. At the same time, tests of models of the medium tank T20 were held against the background of the already developed new requirements for the appearance of the promising medium tank. By that time, the T20 did not satisfy the US Army either in terms of security (maximum thickness of armor in the forehead of the 63,5 hull mm) or in firepower (76-mm M1-1 tank gun with 40 bore caliber length). The test result for all T20 tanks was known from the very beginning. In addition to this, the T20EX3 still operated the transmission unreliably. Despite all of the above, tests of combat vehicles were carried out in full, and they continued until December 1944, when all the work on the T20 series was finally completed. Tests were carried out to the end, as their results were necessary for work on other more priority projects, including a new promising tank, which will be included in history under the official designation М26 Pershing.

Performance characteristics of the T20 1943 model of the year:

Ctrl Enter
Noticed oshЫbku Highlight text and press. Ctrl + Enter
We are
On the prospects for the procurement of tanksT-60 returned to service
Military Reviewin Yandex News
Military Reviewin Google News
7 comments
Information
Dear reader, to leave comments on the publication, you must to register.