November 28 2017
2
Turkey does not lose hope of finding a compromise in discussing the post-war structure of Syria with all the participants that have political weight in this matter. On the eve of Ankara once again called on Washington, relations with which it has recently deteriorated markedly, to begin a constructive dialogue on a Syrian settlement. 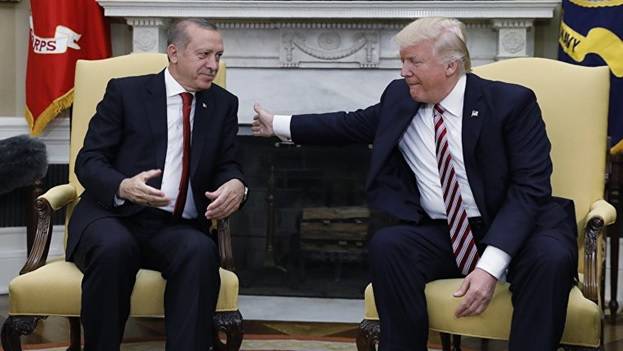 Last weekend, Turkish Prime Minister Binali Yıldırım expressed hope that in the near future the United States would stop military support for Kurdish forces ’Popular Self-Defense Forces (SNS) and resume cooperation with“ true partners ”in the Middle East. The politician once again emphasized Ankara’s negative attitude towards the idea of ​​a partnership between the Pentagon and the SNA. As the Turkish Prime Minister said: “The United States has told us that this is a forced choice. After stripping [Syria] of extremists, this need is no longer there. ”

Washington's cooperation with the armed forces of Syrian Kurdistan is becoming one of the main foreign policy issues that are being discussed by the Turkish leadership. Earlier, Foreign Minister Mevlüt авavushoglu said that during a telephone conversation, American President Donald Trump had assured Turkish counterpart Rejep Tayyip Erdogan of his intention to stop further supply of weapons to the Syrian Kurdish self-defense forces. It is noteworthy that the next day, the Associated Press reported that the Pentagon and the State Department did not have information about amending the American leader in the program of assistance to US partners in Syria.

Understanding the situation, Ankara’s intentions to reach an agreement with the NATO ally on the NATO bloc over the Syrian settlement, subject to the latter’s refusal to support the Syrian Kurds, are quite understandable. At the final stage of the fight against terrorists in Syria, the key goal of the Turkish leadership is to weaken the positions of Syrian Kurdistan from both a military (Turkey’s desire to conduct a military operation in the Afrin region) and a diplomatic (recognition of Kurdish troops by terrorist organizations).

This issue continues to be defended by Turkish politicians both in negotiations with Russia and Iran, and in discussions of the Syrian problem with the leadership of the United States and other participants in the pro-American coalition. At the same time, the current president of Turkey, Rejep Erdogan, has a political basis for dialogue with the Russian and Iranian leadership, and in turn, Ankara’s prospects for reaching an agreement with Washington have not been traced.

As is known, the main thing in negotiations with Moscow and Iran, with which Ankara disagrees, is a variant of the partial independence of Syrian Kurdistan, which is allowed by two other partners. At the same time, US policy aimed at the illegal deployment of military bases in northern Syria and support for Kurdish armaments is completely at odds with the interests of Turkey, creating a threat to the national security of the state. Thus, it remains only to state that Erdogan’s attempts to lobby his interests among overseas elites will continue, but there is no reason to speak about the success of this initiative.

It should be noted that the United States has supplied arms and, in particular, military equipment to partners in Syria on a regular basis. A good example of this is the decision of Washington to give the Kurdish detachments 220 units of armored vehicles (120 machines were shipped last week, and 100 units were delivered the day before).

However, the understanding that it will not be possible to resolve the Kurdish issue with the United States comes to Turkey, if the situation is assessed not by the statements of the Turkish authorities, but by real political steps. Thus, amid unsuccessful attempts to establish a dialogue with the United States, Ankara signed an agreement with Tehran to strengthen trade ties. Obviously, the establishment of economic relations with the state from the American “black list” is just another confirmation of Turkey’s farewell with the illusion of a revision of policy in the Middle East by the “guarantor of world security”.

Ctrl Enter
Noticed oshЫbku Highlight text and press. Ctrl + Enter
We are
What you didn't want to know about EnglandInterview by President Bashar Al-Assad to the Sunday Times
Military Reviewin Yandex News
Military Reviewin Google News
2 comments
Information
Dear reader, to leave comments on the publication, you must to register.