This is how the newest Israeli victory war machine looks and acts.

December 1 2017
72
Tank "Merkava-IV" ("Barak") is fully controlled by computers, equipped with augmented reality and should play a crucial role on the battlefield 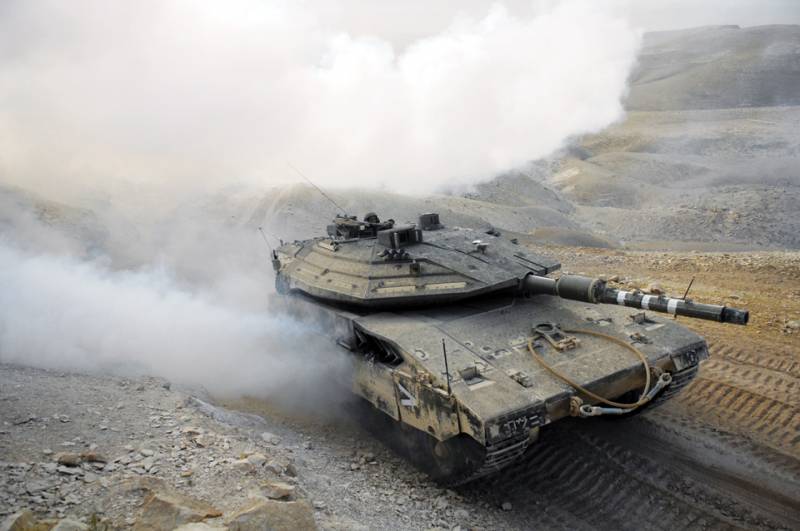 Tank "Merkava-IV" "Barak". Photo of the press service of the IDF

In recent years, the IDF’s armored forces have been struggling for survival. More and more voices are heard stating that in a new war tank There is no place. Recent combat checks - in the second Lebanon war and two operations in Gaza - showed that the tanks were too vulnerable. It is not surprising that the command is trying not to resort to ground operations, solving problems from the air or with the help of special forces.

The developers had, perhaps, the last chance to create a modern machine to support ground forces and independent operations. Brigadier General Baruch Matsliah, head of the developers, said: "I dream that on the day when there is a need for tanks, the vehicles of the new generation will decide the outcome of the war."

"Barak" - the result of continuous effort. Today we can tell only about a small part of its characteristics. This is a tank, but ... not just a tank. This 70-ton monster, armed with artificial intelligence. His crew is five: four soldiers and a robot that will detect the target, warn, advise, analyze and direct the target in a pleasant female voice (the developers found out that the robot speaking by a male voice is perceived as a full-fledged member of the crew, but this prevents the fighters).

Baruch Matsliah - head of the armored department of the Ministry of Defense, laureate of the Israel Prize. "We experienced the idea of ​​creating an" unmanned "tank-robot. In experiments, everything went smoothly, but a tank is not a drone-drone, departing at a certain moment and landing a few hours later, after which it has been resting for weeks. The tank needs a crew."

Computer around the head

The new tank was developed on the basis of the Merkava-IVM ("M" means that the tank is equipped with the Windbreaker, Meil-Ruach) active protection system). Barak is equipped with 46 computers and dozens of sensors, turning it into a deadly digital system capable of hitting 90% of targets with a first projectile. 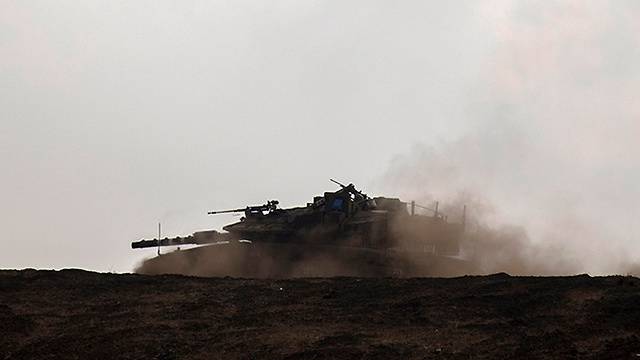 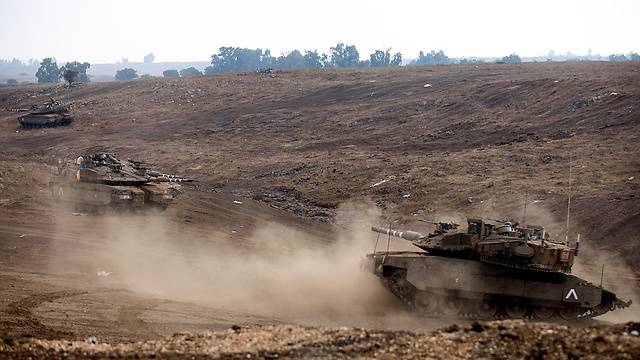 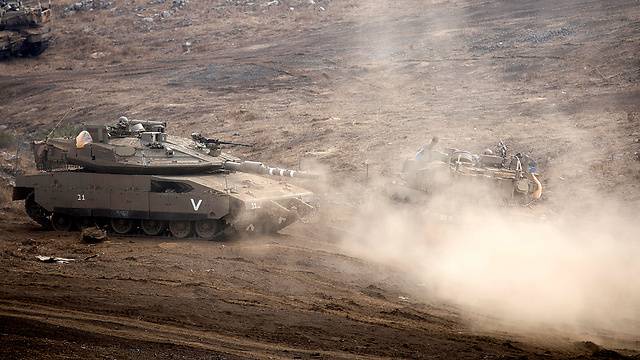 In current tanks, crew members are searching for targets. In "Barak" there is an additional computer, called in the armored control "target-targeting computer". In essence, this is an artificially controlled device that collects data from the rest of the tank’s computers and provides the crew commander with the necessary information, including video. The process of finding the target and shooting occurs in seconds, the commander not only receives reliable data, but also offers him a plan of action. Part of the operations the computer performs independently. So, after identifying the threat with a computer, he himself sets the sight, not waiting for the commander to do it. An enlarged image of the object from which the threat emanates is displayed on the screen.

The number of goals determined by the computer is much larger, the coordinates are much more accurate. Other computers and sensors, including panoramic day and night cameras, in the rain and fog, will detect any movement in the vicinity of the tank, mark the object and find out if it is hostile. The host computer will tell you which weapon apply on purpose. He will also call the commander heights dominating the battlefield, from where you can conduct attacking actions.

"Barak" is designed so that the reaction to the shooting was automatic, without involving a person. In the armored troops decided to leave for the time the decision to shoot the tank commander, fearing "friendly fire."

Some of these technologies were used during the "Unbreakable Rock". By the way, the tank’s projectile flies faster than an anti-tank missile, i.e., the crew that launched the missile will be withdrawn before the Vetrovka intercepts the missile.

Armored troops still digest technological innovations that pilots and sailors have long enjoyed. Last month, the helmet of the tank commander, which is produced by Elbit, was tested and resembles the helmets of modern aircraft pilots like the F-35. When the commander turns his head, he sees what is happening around on the screen in front of his eyes and receives information to make a decision. Tankers are very pleased with the new product. Who would have believed that a flight helmet would be useful in a tank! 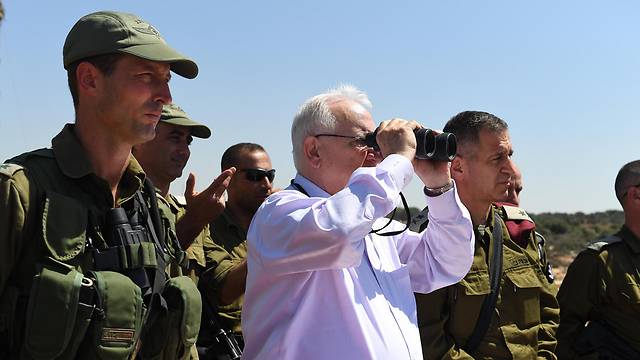 The main mental change that the Barak will bring to the armored forces is a change in the location of the crew. There is no more war in the tower, the servicemen are hidden and maximum protected. The lid of the tower hatch does not rise, tankers, like submariners, view the battlefield through the periscope. The latest infantry fighting vehicles will also be armed with computers and sensors of this class.

How did Israeli tanks change

The armored command was created in 1970 year. His first work was the tank "Merkava-I", descended from the conveyor in 1979 year. Since then, Israel has produced more than one thousand tanks, but it cannot be said that the production was massive. Until now, the pace of assembly of combat vehicles on the conveyor, in fact, is minimal. More attention is paid to keeping the production line in working condition in the event that it is unexpected — and it is always unexpected — that an urgent need to accelerate the pace of work and increase production to provide the army with combat vehicles.

Tank "Merkava" was born as a reaction to the trauma of the Doomsday War. Then the combat vehicles in service did not show the necessary degree of protection. 2000 tanks took part in that war, most of them were modernized American and British vehicles of the Second World War. As a result, 800 were damaged to varying degrees, 500 was disabled. The death toll reached 1,7 person per damaged tank.

In the Second Lebanon War, Merkava tanks with reactive defense took part. 400 tanks were introduced into Lebanon, 5% of them were damaged, five were completely destroyed. On average, one person died in a damaged tank, most died in fully destroyed vehicles. In Operation Unbreakable Rock, part of the tanks was supplied with active protection, and none of the upgraded tanks were damaged.

“2006 was a turning point for the year,” says Matsliach. “When I saw a damaged tank, I felt as if my arm had been taken from me. With active defense, our Vetrovka, we are ahead of the whole world. The US is buying from us for the Abrams tank 100 of such installations. Never, unfortunately, we will have enough systems to protect all types of armored vehicles, but any part invading Lebanon will be best protected. We are preparing tanks for future battlefields. Even today they are armed with projectiles that you’ve never heard of in 2005, they’d and developed by the Israeli military concern TAAS for a battlefield with an “endangered enemy.” In 2011, the calanite (anemone) was put into service, the official name is 120 mm APAM-MP-T, M329, the combat use began in 2014. multipurpose shells penetrating into bunkers and destroying manpower, but capable of penetrating tank armor at a distance of 5 km, destroying infantry with shrapnel, undermining buildings, vehicles, even helicopters. But the tank is not only a weapon. If the tank crews do not reach the 90% defeat by the first projectile at the drills, we analyze and eliminate the shortcomings. "

Ctrl Enter
Noticed oshЫbku Highlight text and press. Ctrl + Enter
We are
A great interview with Sergey Lavrov: about Ukraine, Obama and IranWhat you didn't want to know about England
Military Reviewin Yandex News
Military Reviewin Google News
72 comments
Information
Dear reader, to leave comments on the publication, you must to register.