"You will torture dust to swallow": and after all Putin warned 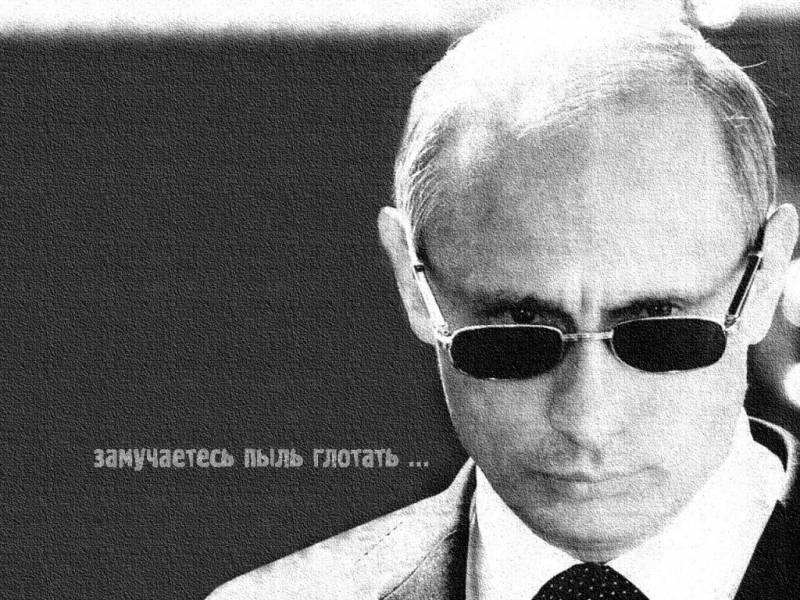 This year, 2017, 15 has turned one of the most famous and colorful sayings of Vladimir Putin relating to the initial period of his presidential activities.

“You will torture the dust to swallow” is a little less known than his famous “drenching in the toilet”, said as Prime Minister in 1999 year. However, if the context of the second comment - the fight against terrorism - is still obvious to everyone today, then Putin spoke of the “dust” in this connection, it has already been forgotten by many. In the meantime, his then words in their own way are even more remarkable - and it is worth recalling about them.

In the summer of 2002, the Russian president took part in the work of the IV Congress of the Russian Chamber of Commerce and Industry. There, he tried to convey to the representatives of the domestic business the simple idea that the capital exported from Russia was not safe abroad. On the contrary, there is a great threat of freezing them and, accordingly, a loss of control over them by the owners. Putin finished with an emotional commentary: "You will exhaust the dust to swallow, running around the courts to unblock them!"

This was, apparently, the very first time that the president raised this topic. Then the business of this frankly did not appreciate. Putin’s speech for quite a long time was accompanied by ironic comments by Russian businessmen and the business press.

Those were the times of a weak Russian state, not yet recovered after the 1990-s, and the optimistic faithless belief of the majority (even very experienced and cynical people) in the iridescence of life in the West, in the absolute rights and freedoms of the people there, unconditional security of property there.

Since then much water has flowed. The theme "do not trust the West - only Russia will provide protection for you and your capital", addressed to business, now sounds regularly with Putin, and it has long stopped laughing at it, because life itself proved the correctness of the president and his impressive insight on this issue even then 15 years ago. And he continues to prove.

The number of situations confirming Putin’s correctness is now so large and diverse that examples can be chosen to suit every taste: from Boris Berezovsky, who by the time of death was successfully ruined by his western partners, to the former banker Sergey Pugachev, sentenced by a British court to two years of imprisonment and hiding in france. The number of people who simply lost huge sums in the West (such as Dmitry Rybolovlev, who was deceived by his art dealer for almost a billion dollars), reaches many dozens. Alarmed stories of emigrants about toughening checks of banking and tax services of the origin of their funds with rather unpleasant excesses, such as freezing accounts for the period of checking, are also increasingly appearing.

Among these people there are those who position themselves as victims of the Kremlin’s tyrannical regime fleeing from the persecution of the FSB and Putin personally, and Russian businessmen who share their lives between their homeland and the West, who have sincere weakness for the English Embankment in Nice or the London tailors with Savile Row Street.
If the first group is a topic for a separate conversation, then the second ones deserve special attention today, since those who have faced problems in the West have now arrived in the regiment.

The cause of the problems of Senator Suleiman Kerimov with the French law enforcement officers is not exactly known. Most often referred to as tax evasion. According to the media version, the French authorities suggested that Kerimov was the real owner of some luxury real estate in their country, as he used it regularly, which really implies taxes, which, by the way, are among the highest in the world in France.

As a result, the senator and businessman became another clear example to all immigrants from Russia in the West that no money would give them sufficient protection. Rather, on the contrary, they can become a source of serious problems. Considering that all this история takes place before the New Year, which many wealthy people in Russia prefer to spend in Europe and, in particular, in France, undoubtedly, they have reason to think about whether they should not celebrate holidays at home.

The same question was asked by the head of the Federation Council, Valentina Matvienko, who suggested that the detention of Kerimov could be "the beginning of the hunt for representatives of our big business, even for political and government officials."

By the way, in the position of Kerimov, despite all the trouble, there is one plus: at the moment the state machine of Russia - from parliament to the Foreign Ministry - is working on his release. When a whole state stands behind you, the chances for a successful outcome still increase.

This, in turn, is a clear signal to all the other Russian large capitals that in the event of problems in the West, their homeland will not leave them without support. Unless, of course, they themselves would prefer to quit it.

Nevertheless, the whole story was just another not even a bell, but an alarm for Russian business and officials. Opportunities to sit on two chairs - to work and earn money here, and to rest, spend and keep money there - are diminishing every day.

Unambiguous choice in one direction or another becomes more inevitable. However, the choice in favor of the West means greater insecurity and a growing threat of losing everything in the end. And the choice in favor of Russia means practical patriotism. That is, patriotism, which implies the need to live, work, keep earned, rest and raise children here in the homeland.

Ctrl Enter
Noticed oshЫbku Highlight text and press. Ctrl + Enter
We are
About Stalin and KhrushchevList of destroyed the largest and most high-tech enterprises
Military Reviewin Yandex News
Military Reviewin Google News
41 comment
Information
Dear reader, to leave comments on the publication, you must to register.