Nobel created his award not to be called a "death merchant" 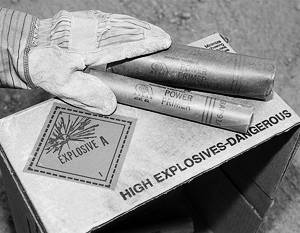 At the end of November, there are two anniversaries associated with the name of the Swedish-Russian chemist Alfred Nobel. 150 years ago, they patented dynamite, and 120 years ago, his will for the Nobel Prize was announced. These events are connected with each other: with the help of the award the chemist wanted to apologize for his invention - one of the most important for that time.


Dynamite is a blasting explosive mixture based on nitroglycerin with scavengers and other additives. Nobel's invention is in these very additives. They were called upon to stabilize the very unstable nitroglycerin to such a state that the explosion could be controlled and the explosive itself to be produced on an industrial scale without the threat of being blown up along with the entire plant from any careless movement. Subsequently, Nobel constantly improved this system, inventing even more stable gelatin-dynamite.

Around Nobel and dynamite are a lot of amusing, but generally meaningless numerology, which gives occasion to reason to remember history of this invention. Dynamite was patented on November 25 on 1867. And Nobel received his first patent for the first gas meter in the world ten years before - in 1857. In 1847, the teacher of Nobel Ascanio Sobrero discovered nitroglycerin, so if you wish, you can celebrate the common Day of the invention of nitroglycerin, a gas meter and dynamite.

In addition, in 1887, Nobel patented ballistics - the basis for smokeless powder, from which all modern explosives eventually grew. And on November 27, 1897 of the year, his will was pronounced, affecting all relatives except one - Emmanuel's nephew, who turned out to be an extremely honest and conscientious person. As a result of this event, as you know, the Nobel Prize was established.

Nobel himself wrote his testament two years earlier - but also on November 27. These dates can be juggled for a long time.

Nobel would be a man of fine mental organization, a Swede with a Russian soul, he even wrote plays. And at the same time - a staunch pacifist (hence the Peace Prize). His passion for the chemistry of explosives was aimed at good goals, primarily the construction of tunnels in the Alps and the development of gold mines in South Africa. However, this did not prevent the company of the Nobel brothers to grow rich on military orders during the Crimean War.

For military purposes, the artillery shells with a dynamite base were first used by the Americans during the war with Spain in the 1898 year, that is, after Nobel's death. The so-called “dynamite cruiser” of the US Navy “Vesuvius” bombarded the Chilean capital of Santiago with pneumatic guns at night - the dynamite mixtures were still not sufficiently stable, and therefore such an exotic type of weapon was required. But military technology was already ahead of Nobel by leaps and bounds, and he could only get rich and sad.

Alfred Nobel, like the inventor of the first modern industrial machine gun, Richard Gatling, really hated weapon. And they additionally invented for their justification the “theory of military deterrence”. According to them (and at that time many people were fond of such ideas), if all the “civilization nations” become armed with which they can destroy each other, they will stop fighting with each other. As if not so. 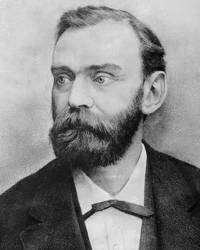 All this Dostoevskaya longing in the soul of an ethnic Swede was fueled by newspaper headlines in the style of "death merchant" and "millionaire on blood." A few years before his death, he wrote about himself: “Alfred Nobel - his existence should have been suppressed at birth by a merciful doctor. The main virtues: keep your nails clean and no one is a burden. The main disadvantages: no family, endowed with bad temper and poor digestion. The greatest sin: not worshiping Mammon. The most important events in his life: no.

Finally, Nobel got killed by a Nobel's everlasting suffering (including from unrequited love for actress Sarah Bernard). In 1888, the European newspapers were bypassed by an obituary under the characteristic heading "Death Merchant is Dead." In fact, Alfred Nobel's brother Ludwig passed away, but the soul of the “death merchant” did not digest this. Then he thought about how he will be remembered after death and, admittedly, he found a brilliant solution. Thus was born the Nobel Prize.

Numerous Nobel's relatives then tried to challenge his will for a long time, but his nephew Emmanuel (also a Swede with a Russian soul) gave a killer argument for Scandinavia: “Russians call the executor a testament“ soul mate ”, he told lawyers of the lawyers. “So proceed accordingly.” Later, Emmanuel added: “I don’t want the most worthy scientists in the future to blame our family for appropriating the means that rightfully belong to them.”

But back to the dynamite. Initially, much more popular than in the army, he enjoyed the terrorists. In those days, the process of assembling an explosive was a delicate and dangerous affair, so that the fate of a bomber was often unenviable. The first recorded attempt to use dynamite for terrorist purposes was the story of the explosion of the Mosel packboat at sea in 1875. True, the former saboteur of the southerner army, William King Thomassen, did not want to prove anything political by this — he wanted to get insurance. But something did not calculate, and a barrel of frozen dynamite exploded even when loaded onto a vessel, killing an 80 man.

The Irish were much more fortunate. In 1883 – 1885, London was swept by a wave of dynamite explosions organized by the IRA. They were from 13 to 15, according to various estimates, including the explosion in the Scotland Yard building and the unsuccessful attempt to undermine the London Bridge.

For the same years, the peak of activity of the Russian “Narodnaya Volya”, as well as of some European anarchists, falls.

But mainly the use of dynamite was concentrated in mining and construction of tunnels and canals. By 1910, its production in the world has reached hundreds of thousands of tons per year. At the construction of the Panama Canal alone, more than a million tons were spent. Stamps of dynamite breed hundreds, and the Nobel firm can no longer control its production, despite the patent.

However, already in the 20-ies of the twentieth century, dynamite begins to gradually disappear from the scene. He is replaced by nitrate-based explosives and more complex but more stable chemical compounds. It completely disappears from military affairs and begins to be squeezed out of the mining industry, including under the pressure of trade unions, since all nitroglycerine-based compounds, no matter how Nobel followers tried to make them more stable, remain extremely dangerous to use. Frequent accidental explosions in factories and mines, which claimed hundreds of lives, eventually forced the industry to abandon the dangerous material.

South Africa remained the last major consumer of dynamite in the world, where it was massively used in gold mines, and especially in large quantities - from the 1940's. South Africa, up to 1985, remained the largest dynamite manufacturer in the world. Only by the beginning of the 1990-s most of the local factories were redeveloped.

In the USSR, dynamite ceased to produce by the beginning of the 1960-ies. In the United States, a small number of so-called safety dynamites are still produced, which do not have the greatest risks when working with them. In general, in the world turnover of explosives, various brands of dynamite do not hold up to 2% now.

So the era of dynamite turned out to be short and, like himself, short-lived. And Alfred Nobel remained in the memory of humanity as the founder of the award (no matter how you feel about its current content, its discredit is the result of the actions of our contemporaries, but not the founder), and not as a "death merchant". That is, "I did everything right."

Ctrl Enter
Noticed oshЫbku Highlight text and press. Ctrl + Enter
We are
Nobel Prize - the tool of masons, Russophobes and parasitesList of destroyed the largest and most high-tech enterprises
Military Reviewin Yandex News
Military Reviewin Google News
9 comments
Information
Dear reader, to leave comments on the publication, you must to register.