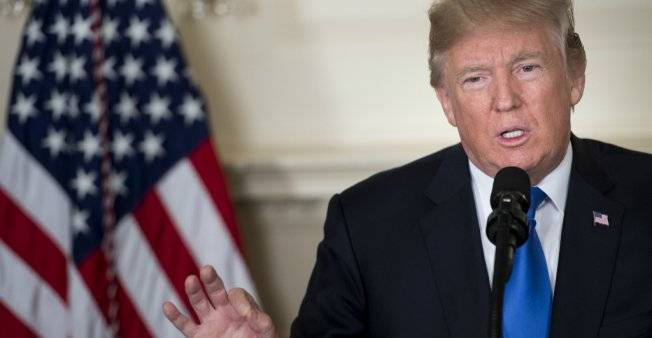 First, US President Donald Trump tore up or revisited a number of trade deals. He then withdrew from the Paris Climate Agreement and UNESCO. He then refused to ratify Iran’s nuclear deal, ostensibly in the interests of the United States. Is it so?

Since Trump took office, the world has seen many innovations in US foreign policy, which not only stunned many members of the international community, but also indicate that the new US president prefers to deal with everything on his own. In particular, if it concerns already established international agreements, alliances and organizations.

The France 24 publication spoke to Pierre Vimont, the former French ambassador to the United States and a senior staff member of the Carnegie Endowment Europe foreign policy analytic center, that Trump applies its America First policy for both domestic and foreign affairs

France 24: Does Trump really decide everything from a foreign policy point of view?
Pierre Wimont: This is certainly one of the trends that characterize his style of government. Trump does not try to be good with everyone and does not maintain relations with organizations or unions that try to please everyone. This was clearly seen at the NATO summit in May, where he first spoke sharply about the obligations of the members of the alliance under the fifth article, and then withdrew from the Paris Climate Agreement.
Trump is definitely fighting “primarily for America,” but he doesn’t feel that America’s most important interests lie in the area of ​​cooperation with organizations and unions. However, we must not forget that his predecessor [Barak] Obama also believed that the multipolar world makes life difficult for America. Nevertheless, he always tried to find a compromise.
Trump is completely different, he is moving in a different direction, on his own.

France 24: Where will this position of "America above all" lead the USA in terms of its relations with the allies?
Pierre Vimont: In addition to geopolitics, there is also the economy. Trump has already abandoned the Trans-Pacific Partnership deal on 12 countries, he is reviewing the NAFTA [North American Free Trade Agreement between the USA, Canada and Mexico] and is quite ready to completely abandon it if it cannot reach an agreement with these two partners. Trump never says anything about the common good. This is the position of American leadership. America Trump is moving forward on her own, becoming increasingly isolated.
In my opinion, sooner or later, the allies of Washington will begin to try to find other ways to move forward without America. For example, what it might look like in the case of Iran’s nuclear deal: if America leaves the game, the European Union will instead work with China and Russia on this issue. The same thing will happen with climate and trade. Thus, the question arises: how does America plan to become the sovereign of the world if it is increasingly “by itself”?

France 24: Because of Trump's foreign policy, are the United States at risk of losing the status of a world power?
Pierre Wimont: Trump still has a lot of power. If you look at the current crises in the world, for example, Syria, it becomes clear that America still has a lot of military influence, but politically it was Russia that took the initiative to find a solution. You can say the same about Ukraine, Libya or Yemen: the Trump administration seems ready to stay in the backseat and give up the right to drive.

France 24: Is this a stable position?
Pierre Vimont: To some extent, it seems to me that the Trump administration will have to change its attitude, because it will not benefit the business community on many economic issues. The American isolation option at the international level can reach its limits, and Trump may need to turn to its allies again.
Voters who voted for Trump are calling for the American administration, which protects all those who lost in the current economic world order. Under Trump, these sentiments began to spread to foreign policy. And it's not just Trump's personality. This is a deeper trend.

France 24: What to expect in the future? Will the United States leave any other international alliances?
Pierre Vimont: Trump strongly criticized the decisions taken by the UN, and called on the United Nations to reduce its spending on peacekeeping operations. Few believe that Trump will decide to leave the UN, but he will continue to exert pressure.
Many are now observing whether America will be able to give up its position in the UN Human Rights Council. Recently, the United States representative to the UN Nikki Haley very much asked the Council to carry out reforms, otherwise America may withdraw from its composition.

France 24: What is Trump's protectionist foreign policy global goal?
Pierre Vimont: I think that his slogan “we will make America great again” answers your question. But the “America First” policy also means that the States will become more independent. The worldview “let's make America great again” is very closely connected with the past, from which there is not a trace left. Today, the world consists of many powers whose presence, actions and influence must be considered. We are talking not only about Russia, but also about strong China, influential India, Japan and many other partners, including from Europe. Their reaction to President Trump’s decision on the Iranian nuclear deal is a vivid illustration of today's US leadership boundaries.

Ctrl Enter
Noticed oshЫbku Highlight text and press. Ctrl + Enter
We are
A great interview with Sergey Lavrov: about Ukraine, Obama and IranWhat you didn't want to know about England
Military Reviewin Yandex News
Military Reviewin Google News
5 comments
Information
Dear reader, to leave comments on the publication, you must sign in.