November 27 2017
14
The new MBDA Meteor missiles, produced by the European concern MBDA Missile Systems, are being adapted for the F-35 fighters of the Japanese Air Force. According to the portal asia.nikkei.com, Japan and the United Kingdom have agreed on a joint program to develop a new air-to-air missile. 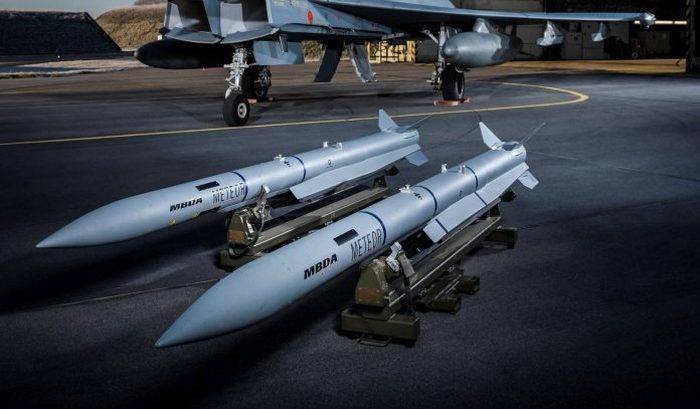 As part of a joint project, it is planned to create a new generation of missiles capable of destroying various types of air targets. It is assumed that the base platform will be the new MBDA Meteor rocket, which will be equipped with a radar system developed by Mitsubishi Electric. For Japan, this is the first international defense project that the country is not implementing with the United States.
The assembly of the prototype missiles is scheduled for 2018 year, the first tests are planned for 2023 year. After that, the partners will determine whether their offspring will go into mass production. The new missiles will be used on the latest American F-35 fighter jets, which Japan buys for its air force. In addition, the partners are counting on export orders, which will reduce the cost of mass production of new missiles.

The MBDA Meteor is a long-range air-to-air guided missile equipped with an active radar homing head. The rocket has a marching ramjet engine, which allows you to maintain a high speed of flight throughout the trajectory. The Meteor rocket is being developed by MBDA from 1997 of the year for the French, British, Swedish, German, Spanish and Italian Air Forces. The range of the rocket is 100 km. The first MBDA Meteor adopted the Swedish Air Force in 2016, transmits "Warspot"

Ctrl Enter
Noticed a mistake Highlight text and press. Ctrl + Enter
We are
14 comments
Information
Dear reader, to leave comments on the publication, you must to register.