April 3 2012
20
At present, Indian troops have almost 3500 tanks and several thousand infantry fighting vehicles of various brands. Most of the country's armored vehicles were produced at local factories, which have been producing it for several decades. Most of the tank fleet falls on Soviet and Russian-made vehicles. Only the Arjun Mk.I tank and its advanced version of the Arjun Mk.II can be considered fully Indian development. The armored forces of India consist of 58 tank regiments.


Indian tank building was established at the beginning of the 1960s, when an agreement was reached between the Indian government and the British company Vickers to build a tank factory in the city of Avadi. This plant was commissioned in 1966 year and provided for the Indian army the construction of tanks Vijayanta (Ind. Winner). This tank was the Indian version of the English tank Vickers Mk 1. Initially, Avadi carried out only the assembly of tanks from components and parts that were supplied from England, but later, as Indian engineers acquired the necessary experience, the production of tanks was established in India. By the end of the 1980-s, the Indian industry produced about 2200 such machines. This tank was in service with the Indian army until 2008 year.

Currently, the basis of the country's tank fleet consists of Soviet and Russian vehicles. Most of the BMP is also represented by Soviet BMP-2 machines and their local modifications. India’s land forces are armed with X-NUMX T-600 tanks, X-NUMX T-55X1925 and 72 T-1C tanks. Also, to date, the Indian army has approximately 640 Arjun Mk.I own developed, in total, the military should get 90 such tanks. Another order for 169 tanks involves the purchase of the next modification of the Arjun Mk.II car. After it is completed, the total number of Arjun tanks in the Indian Army will be 248 units. 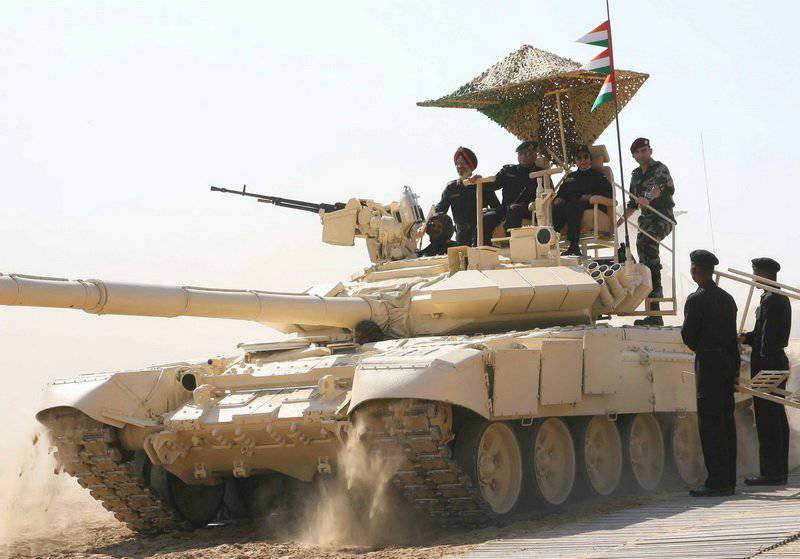 T-90C Indian Army
In 2001, India and Russia entered into a licensing agreement for the production of X-NUMX T-1000 tanks in India, but the production of these tanks at the Avadi plant was only possible in 90. By 2009, India’s ground forces should be equipped with X-NUMX T-2020 tanks. Also, by this time, a complete write-off of the T-1657 and T-90 tanks and their replacement with the Arjun Mk.II and FMBT (Future Main Battle Tank) vehicles should occur. Work on the FMBT program Indian tank builders plan to begin in 55 year. At the beginning of 72, a report was published by experts of the auditing company KPMG together with the Union of Industrialists of India, according to which about half of India’s military is obsolete. At the same time 2012% of tanks do not have night vision devices.

The first tank Vijayanta, the production of which was established in India, had a classic layout: in front - a control unit, in the center - a fighting compartment, in the stern of the tank - a power transmission compartment (MTO). The hull and turret of the tank were welded, and were made of rolled homogeneous armored steel. In front of the hull was a driver's seat, it was offset from the longitudinal axis of the tank to the right (traditionally for countries with left-hand traffic). The rest of the crew was in the tank tower: the gunner and the commander - to the right of the gun, charging to the left.

The basic one weapons The tank was an English 105-mm rifled gun, L7A1, using unitary ammunition with armor-piercing sabotage and high-explosive fragmentation projectiles. The initial speed of the armor-piercing projectile was equal to 1470 m / s. This tool was used on almost all types of Western armored vehicles until 120-mm rifled and smooth-bore guns appeared in Germany and Great Britain. Together with the gun was paired 7,62-mm machine gun, and to determine the distance to the target used 12,7-mm machine gun mounted on the roof of the tower.

In the middle of the 60 of the last century, Vijayanta, like its English prototype, was one of the few tanks that had weapon stabilization in the 2's planes, which was provided with an electric stabilizer. During its operation, the tank was repeatedly upgraded. In particular, the Center for the provision of tank electronics in Madras produced for him a new MSA Mk 1A, which had an improved connection of the sight with the gun, which minimized the backlash between the scope and the gun. Also in the new fire control system was provided a control system of the bend of the gun, which eliminated the misalignment of the axes of the bore and the sight, which could be caused by thermal deformation of the gun. A more advanced MSA Mk 1B was also created, which had a ballistic computer that increases the likelihood of hitting the target with the first shot and a laser sight-rangefinder of English production. 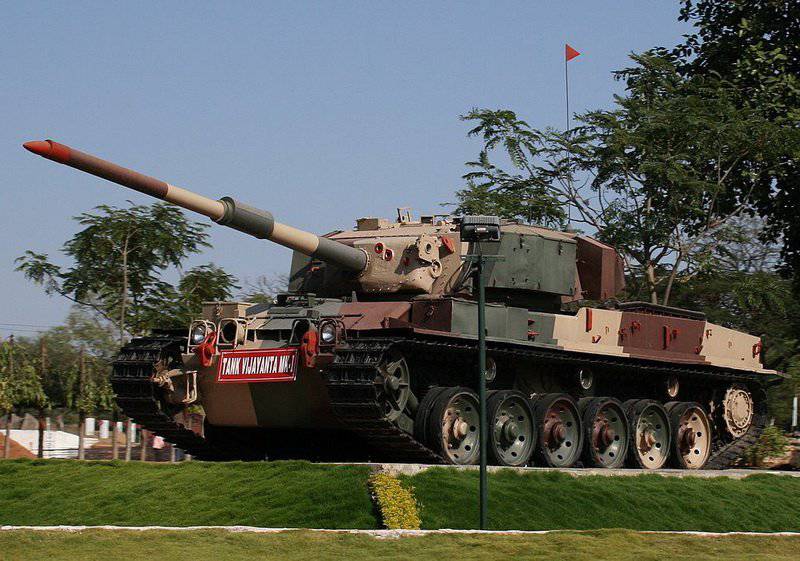 The first Indian-made tank Vijayanta
At the same time, the installation option for tanks of the Yugoslav OMS SUV-T55A, which was intended for the T-54, T-55, T-62 vehicles, was considered. Its production was established in India. Also, the modernization concerned the improvement of the security of the tank, which as a result received modern Kanchan combined armor, created specifically for the Arjun tank. Although Vijayanta is a licensed copy of the tank Vickers Mk. 1, its characteristics were slightly different from the original. The tank's ammunition consisted of 44 shots, 3000 ammunition for an 7,62-mm machine gun coupled with a gun, and 600 ammunition for a large-caliber machine gun.

Around the same year, when the Indian tank industry mastered the production of Vijayanta tanks, the Indian army received for service from the USSR T-54 and T-55 tanks, which proved themselves very well during the fighting with Pakistan in 1971 year. To ensure the long service life of these tanks, a special tank repair plant was built in the city of Kirche. Currently, the T-55 tanks are still in service with the Indian army.

In parallel with this, the Indian designers carried out work to create their own tank, but this process was slow, not everything could be implemented immediately. In order to keep its tank fleet up to date, the government of India decided to purchase in the USSR a consignment of T-72М1 tanks. Originally it was planned to order a small batch of tanks (about 200 units), but waiting for the start of production in Indian factories own tank Arjun was delayed. As a result, due to the lack of reliability, high cost and the duration of work on its own tank, it was decided to start the production of a licensed copy of the T-72M1 tank in Avadi. The installation batch of tanks left the factory gates already in 1987 year.

The first 175 machines were assembled from kits obtained from the USSR, which provided substantial assistance in the development of Indian heavy industry. The final goal of the Indian designers was to make India produce this tank, using its own resources to the maximum, bringing the share of Indian parts and components in the tank to 97%. Currently, it is the T-72М1 tank, called the “Ajeya”, that forms the basis of the Indian tank park. 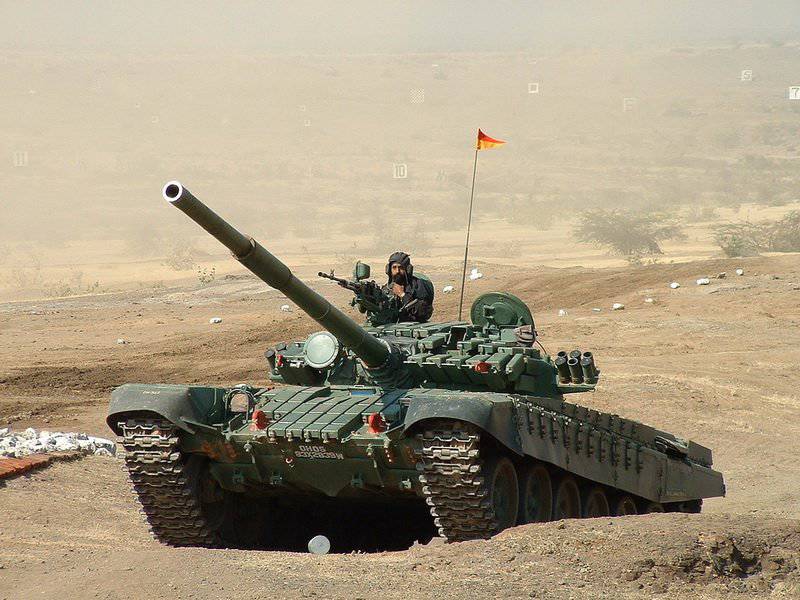 Indian Army T-72 Tank
At the beginning of 1997, Russia proposed to install an Arena-E active defense system on Indian T-72М1 tanks, which could be a response to the acquisition of Ukrainian-made T-80UD tanks. The T-80UD tanks were in some respects superior to the T-72, which form the basis of Indian armored vehicles. However, in India it was decided to purchase modern T-90С tanks in Russia and further develop their production under license. Today, India has the largest fleet of T-90 tanks in the world, ahead of even Russia in their numbers. By 2020, the number of T-90C tanks in service with the Indian army will exceed the 1600 units, which will be consolidated into the 21 tank regiment.

After gaining sufficient experience in the production of licensed tanks, Indian engineers began designing their own tank. The epic of creating the first fully Indian Arjun tank is comparable in duration with the time that the epic Russian hero Ilya of Murom lay on the stove. The development of this tank began in India in 1972 year. Initially, it was created to replace the Vijayanta tanks in the army, but now it will have to change the T-72 tanks. India has attracted well-known foreign companies German Krauss-Maffei, Renk and Diehl (MTU engine, automatic transmission and tracks), as well as the Dutch Oldelft.

The first copy of the machine was ready for 1984 year, at that stage of the project implementation, the cost of it exceeded 6 million dollars. In the future, work on fine-tuning the machine and its tests passed with varying success all 90-s. In this case, the operation of the tank in the Indian army began only in 2011 year. Total defense order provides for the purchase of Arjun Mk.I 248 tanks. The first 124 tanks supplied to the troops were armed with a 2 tank regiment, in which they replaced the Soviet T-55 vehicles.

Indian tank Arjun has a classic layout. The tank driver is in front and to the right, the tank tower is in the center of the hull. The gunner and machine commander are located in the turret to the right of the gun, the loader is on the left. In the stern of the tank installed power plant. Initially, German MTU MB838 Ka-501 diesel engines with 1 400 hp power were installed on the tank, working in conjunction with the Renk automatic transmission. This engine allows the 59-ton car to reach speeds in 70 km / h on the highway and to 40 km / h on rough terrain. 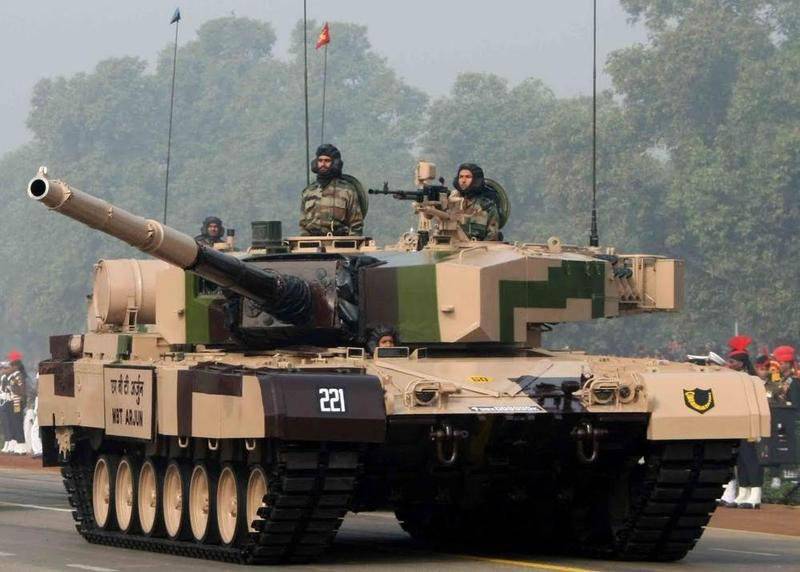 Tank Arjun Mk.I
Serial machines are equipped with a new type of Indian-made Kanchan combined armor, which was created by the Metallurgy Laboratory of the Ministry of Defense of India. Also, tanks are equipped with a system of protection against weapons of mass destruction and an integrated automatic fire extinguishing system, which consists of infrared detectors for fire detection and fire extinguishing systems. This system works during 200 milliseconds in the crew compartment and for 15 seconds in the engine compartment of the tank, increasing its survivability.

Unlike many of their foreign counterparts, the Indian tank is armed with an 120-mm rifled and not a smooth-bore gun. Especially for this gun, the Indian Research Institute of Explosives in the city of Pune created unitary shots with a partially burning cartridge case with an armor-piercing-type, armor-piercing with plastic explosives, cumulative and smoke projectiles. The tool is made of special steel using electroslag remelting technology and is equipped with an ejector and a heat-insulating casing. Together with the gun, the 7,62-mm machine gun is paired, and the 12,7-mm anti-aircraft machine gun is used to combat low-flying targets.

The Arjun tank control system includes a ballistic computer, a laser rangefinder, a thermal sight, a commander’s stabilized panoramic sight, and an additional telescopic sight. According to experts of the 3 generation LMS, together with a twin gun and an electronically controlled sight, the vehicle's gunner can detect, identify, accompany and destroy targets both from the spot and on the move.

The new version of the Arjun Mk.II tank, which should be commissioned by the Indian army in 2014, largely repeats the Arjun Mk.I. The main difference is the large localization of the vehicle. So she should get the engine and automatic transmission of Indian production, and the total share of Indian components should exceed 90%. The main differences of the new version will be: the ability to launch guided anti-tank missiles through the barrel of a tank; new active-reactive armor; new guidance and surveillance systems, as well as thermal imagers and communication systems.