What is the Middle East for Russia: success or is it a trap?

November 28 2017
43
Returning to the Middle East, the Kremlin seeks prestige, influence, markets weapons. This is the classic behavior of a great power, A. Cohen believes. Russia in the Middle East found itself in a military, political, moral quagmire; In addition, she became a hostage of the Iranian mullahs and the “bloodthirsty Syrian president,” B. Galian believes. 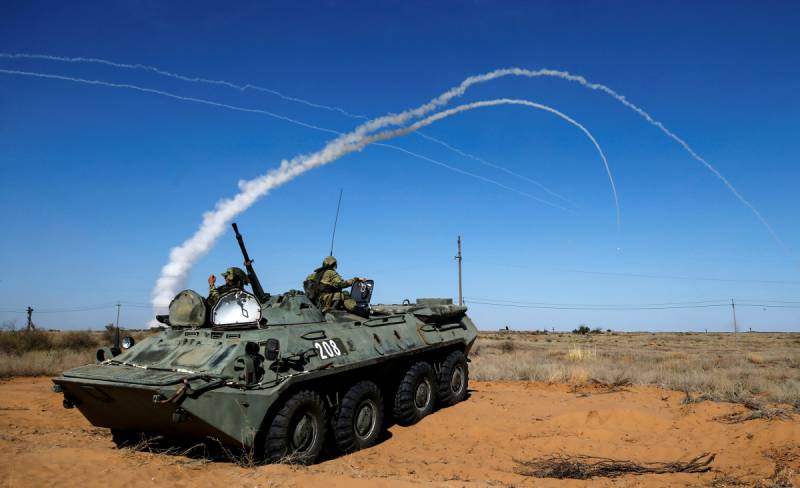 By returning to the Middle East, the Kremlin creates a “geopolitical challenge” to the interests of the United States and its allies, the journal writes "The National Interest" PhD Ariel Cohen.

Moscow’s behavior is due both to the “desire for prestige and influence,” and the desire to find markets for “its weapons and other goods”. And this is the “classical manner of conduct of the great-power regime,” the author believes.

In the center of the new “quest” is the relatively low price of oil. In addition, Saudi Arabia has faced the most serious political crisis since the 1920s. In such circumstances, Moscow’s cooperation with Tehran and Riyadh put Russia "at the center of attention in the region." But is it only in business? Not at all: the rebirth of Kremlin influence in the Middle East goes beyond business, it is noticeable in geopolitics.

As in Soviet times, Moscow seeks to "control governments, restore military bases, open sea routes and expand exports." These are “great ambitions” aimed at increasing influence, and they suggest a “wider shift in the regional balance”, indicating a return to strategic rivalry of the nineteenth century. At the same time, the question of “the future of American influence” is becoming sharper in the region.

Since ancient times, Russia has been characterized as an “ever-expanding empire”. For his eight hundred year old history this state only lost territory three times, the analyst points out: this was the case in the early seventeenth century during the Time of Troubles, which led to the Polish occupation of Moscow; so it was after the Bolshevik coup 1917 of the year; Finally, this was the case with the collapse of the USSR in 1991. And after the collapse of the USSR, the Russians abandoned most of their past military achievements in the Middle East, although they traded with those who wanted to acquire their weapons. Being an empire turned out to be “too expensive.” And Syria, with its “supply and repair” naval base in Tartus and the Hmeimim airbase, remains, in fact, the only country with which Moscow has retained its former relations.

With the rise in oil prices after the Russian-Georgian war of 2008, and especially “after Moscow’s invasion of 2014 in Ukraine and the Crimea” (and despite the subsequent drop in oil prices), Russia “proceeded to methodically rebalancing the situation in the Middle East” . The goal is to challenge the United States and its partners.

The weakening of the US regional presence in the Middle East and Russia's readiness to "fill the void" imply a number of aspirations, combined with aspects of Moscow’s national security and global strategy:

1) create a foothold against jihadism;

2) define a strategic competition theater with the United States;

3) to fight for oil prices: in the interests of Russia to increase its impact on oil prices, since this energy resource is “vital for the Russian economy”;

4) to expand the arms market: the conflict in Syria demonstrated the capabilities of the Russian military-industrial complex (from Caliber missiles to Su-35 fighters and C-400 missile defense systems);

4) demonstrate the support of their allies.

As for the USA, the American reaction to this challenge in the Middle East speaks of a regional power vacuum that has developed after the weakening of influence under Obama. The Europeans will not fill this vacuum, and China needs another ten years to get to these parts. Therefore, the Kremlin and made in Syria. This is the “Faustian bargain of Moscow,” Cohen said: Assad, who was condemned by Obama and Trump, is still in his chair; the Astana peace process is guided by Moscow and Tehran, not Washington; Finally, Russian military forces carried out their first successful operation abroad after the “defeat in Afghanistan”, which Soviet forces suffered several decades ago. Moscow has even restored its relations with Ankara: Turks, full of “anti-Americanism,” are already buying Russian C-400 anti-aircraft missile systems.

This led to the fact that the American President Donald Trump condemned the "national ideological crusades" and now, apparently, is looking for a "partnership with Putin." True, the Washington establishment does not agree with these ideas.

History teaches: The United States is a global power, and if so, then they will be involved in future competition for energy resources, and their rivals will be Russia, China and Iran. Washington's slurred position and lack of coherence between the allies may complicate Washington’s support by US allies in the Persian Gulf and Israel and further undermine relations with Egypt’s key Arab ally, the expert believes. Ultimately, America’s global position will suffer, and Russia, with its relatively weak one, accounting for only one-fourteenth of the US economy, will gain an advantage over the US superpower in a global geostrategy.

Another expert, on the contrary, believes that Russia will sink in a strategic "swamp" in the Middle East, since in fact Moscow is in military and political isolation. And in general, the time for the Kremlin to ... ask for forgiveness!

Moscow must admit mistakes and apologize to the Syrians, writes political analyst Burkhan Galyun in the Al Araby Al Jadeed publication (Great Britain; the source of translation from Arabic is "InoSMI").

At a time when Russia was starting a military operation in Syria, its intervention had awakened hope among broad sections of the Syrian population, including those who supported the “Syrian revolution.” Many Syrians believed that Russia is a state in the literal sense of the word, which means that it adheres to minimal international principles, respects international laws and obligations, shows restraint and avoids “revanchist actions,” the author lists. In addition, such principles force this state to “stay away from criminal activities without the risk of becoming like irrational tribal and sectarian gangs that perform politically and morally unacceptable actions like killing civilians, sacrifice an entire people for the sake of strategic, political and economic interests” .

Russia “leads to peace through cemeteries,” Mr. Galyun says. "Moscow participates in the Assad crusade against the Syrian people, is ready to stand for its retention in power until the death of the last Syrian and relieves him from responsibility for the continuing crimes," they argue. And such actions undermine both the authority of the Russian state and its position in the struggle to regain the status of a world power. The author describes the actions of Russia in Syria as a strategy aimed at "breaking the will of the Syrian people and depriving them of the right to seek freedom in the fight against the regime."

“I am sure that Russia will come out of this Syrian“ fire ”weaker than it was before intervening in the conflict, and will be in even greater political and moral isolation,” concludes Galyun.

"Moscow is demonstrating power against the defenseless Syrian people, testing its new weapons and its firepower on the bodies of innocent Syrian children and positioning itself as a superpower, and depriving the support of weak and poor peoples who need a force from the West dominant in international relations. Thus, it behaves inhumanly and immorally, contributing to even greater isolation of Syria, forcing the people to doubt Russia and to experience fear of it. ”

As a result, watching such activities of Russia, the Syrians can "re-apply for help to Western countries, choosing the lesser of two evils."

Russia probably did not lose, and it won’t lose the war in Syria militarily, but it has already been “defeated politically and morally,” the political analyst is sure. Moscow "lost the battle for the solemn return" to the international community as a state-peacemaker. This happened because, Galyun brings the line that Moscow “was thirsty for revenge”, believing that the West, which had humiliated the country for decades, still seeks to blockade Russia. And this humiliation allegedly justifies everything that Russia is doing in the Middle East.

As a result, Russia was “in the military, political and moral quagmire” and became hostage to the “diabolical calculations of Iranian mullahs and their revived medieval projects, as well as the bloodthirsty Syrian president and his barbaric security services,” the analyst summarizes. The result of such behavior for Russia and Syria is sad: Syria "fell victim to the madness and bloodshed of a fool in power," and Russia itself was "trapped." The Syrian curse "will persecute all those who participated, supported, held back crimes and decided to avoid responsibility."

While one scientist (philosopher) writes about the return of Russia to the Middle East, about the growth of its geopolitical influence and filling the “vacuum” in the region, another scientist (political scientist) assures the world community that the Russians have fallen into a trap in Syria and are stuck in political and even moral quagmire.

In connection with the allegations of the latter, the following is curious: the political analyst never once mentions the fight against terrorists that the Russian military forces are conducting in Syria at the request of the legally operating government. One gets the impression that Moscow is acting in the region solely for the sake of the destruction of Assad’s opponents, supporters of the “revolution”. This impression is confirmed by the unfavorable characteristics given by B. Galjun to Assad himself: they say that this “stupid in power” leads a crusade “against the Syrian people”. Such a lack of restraint in assessments does not do credit to a political scientist, who should operate with objective assessments of what is happening.