November 27 2017
32
Vladimir Putin will force Russian plants to produce weapon and ammunition. Obviously, strikes are planned in Ukraine, Poland and the Baltic countries. With democracy, Russia will finally say good-bye in 2024. Six years later, the Tsar will rule the Russians. True, Putin to the idea of ​​a monarchy is cool. 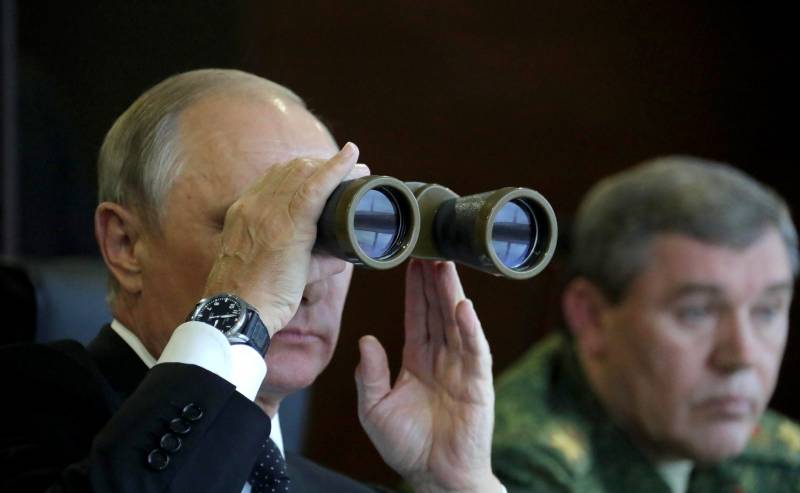 German tabloid "Bild" beside himself with indignation: it turns out, Comrade Putin demanded that the economy be transferred to his military rails in his country!

The President of Russia made a statement at a meeting on the military-industrial complex, so his words are not accidental. Putin intends to prepare the state's economy for war. And therefore, Russian enterprises, both public and private, should be ready to move to the aforementioned "war rails".

Where did such rhetoric come from the master of the Kremlin? Maybe because Putin talked to his colleague, the “dictator Assad” the other day?

And one more question interests the publication: against whom are the Russians arming, to whom did they decide to move their forces? The journalists have the answer: Putin wants his message “to be heard by the neighboring Baltic countries, Ukraine and Poland.”

As for Russian factories, then, according to the German tabloid, this means one thing: if the president of the Russian Federation plans a war, enterprises will have to “cooperate” with the president.

Among the military "operations" that were "carried out" by Russia earlier, the German edition points to the last two: in 2014, Putin "annexed Crimea", and then "organized the supply" of weapons to "pro-Russian separatists" in the Ukrainian East. Putin engaged Russian enterprises in both “military operations”.

And not without reason, the border countries express fears: the Ukrainian scenario may be repeated in their territories.

In addition to Ukraine, in recent years, Putin has waged war in Syria, indicates the publication. The Kremlin supports the "dictator Assad", who "without Russian help would have lost the war."

The Kremlin is fighting on another front, the information one. Fortunately, here the West has something to say: money. Jennifer Rankin tells about it in the influential British newspaper «The Guardian».

The special anti-propaganda unit of the EU, called the East Stratcom taskforce (Operational Task Force on Strategic Communications), will receive 1 million euros annually to counter “Russian fake news", Said the publication. The Stratcom group will be financed from the EU budget, since the threat of “cyber attacks and fake news” has been revealed.

For the first time after the establishment of East Stratcom in 2015, the European Union decided to intensify the campaign against misinformation and Russian infofiles, allocating considerable funds for this. East Stratcom Group will receive money directly from the EU budget. According to a source familiar with the work of this team, the anti-propaganda unit will receive about 1,1 million euros each year.

New funding was opened after the announcement of Donald Tusk at the summit of EU leaders. According to the President of the European Council, one of the real problems of Europe is "cyber attacks, fake news, hybrid war." Ban Tusk believes that Europeans should "exercise" caution and vigilance, because there is a threat within the EU. Tusk referred to Teresa May's speech, which recently accused Russia of interfering in elections and publishing fakes in the media in an attempt to unleash an information war and sow discord in the West.

The decision on the financing of a million counter-propaganda units is even linked to the situation in Catalonia, where a referendum on independence recently took place. (Read more about the "world conspiracy" Russian read on "IN" here.)

How do Russians react to these statements and these countermeasures? Laughing!

Teresa May, for example, got into the spotlight of the state Russian TV. The host of the program "News of the Week" D. Kiselev sneering at the appearance of T. May and hinted that she would soon become a topless activist "Femen".

Is the East Stratcom taskforce able to defeat Russian propaganda? Jennifer Rankin reminds us that the entire 14 team is working in this team in Brussels. Politicians and activists in Eastern Europe argue that the unit simply does not have the resources.

Will this group save a million euros? So far it is difficult to judge anything. It is only known that the group is now "developing plans" about the "expansion of monitoring" of the EU "in relation to the Russian media."

While in the European Union they begin to struggle with Russian propaganda, the Russians end up with democracy. Completely do away with it to the 2024 year: by this time the country will be ruled by an autocrat. But they say that V. V. Putin treats such an idea with coolness.

Simon Cruz in the newspaper "Berlingske" (translation source from Danish - "InoSMI") told about the coming revival of the monarchy in Russia. This can happen because the monarchists use the thesis: "Democracy is the worst form of government."

The correspondent of "Berlingske" visited the same school, where the Russians are trying to grow a new monarchist elite.

Konstantin Malofeev was bred as the central figure of the report. Pupils in school uniform "watch him look." He walks, “and from the walls look Russian monarchs, such as Peter the Great and Ivan the Terrible, dressed in golden frames.” Then Mr. Malofeev stops under the portrait of Nicholas II.

“The founder of the school, overseeing the work of his hands. Twice a month, a religious oligarch invites senior students to an hour-long spiritual consultation. Today we are talking about modesty, although all of them, like Malofeyev himself, are very rich, ”the Danish edition narrates with irony.

Malofeyev, the newspaper reminds, stands “behind the largest Orthodox Christian Christian media conglomerate in Russia.” This man "fell under the sanctions of Western countries on charges of financing the leaders of the pro-Russian rebels in eastern Ukraine, torn by war." And he “cultivated the idea of ​​the largest monarchical school in Russia, which is now housed in neoclassical buildings in the western suburbs of Moscow.” The concept of "monarchical" must be interpreted in the literal sense: Mr. Malofeev wants to return to an unlimited monarchy with the king at the head, which was in Russia before the 1917 revolution. “The oligarch loyal to the Kremlin is one of the most active supporters of the need to drop the masks and recognize the monarchical coloration of the current government,” writes Simon Cruz.

Such is the clear message of “his Orthodox channel” and the new monarchist association, which was formed last week. And the same line is being promoted in this private school, where 350 students aged from 7 to 16 are studying today.

The monarchy is more effective, says Zurab Chavchavadze, the leader of the teacher board. “The president has to think about how to maintain his power. It takes a lot of time and energy. The monarch can devote all his strength to serving the people, ”the newspaper quotes him. At the same time, the monarchy assumes a God-fearing population. And this school should educate a new elite that will serve the future monarchy of Russia, Chavchavadze says. By the way, part of the curriculum is taken from the school system of the time of Nicholas II. 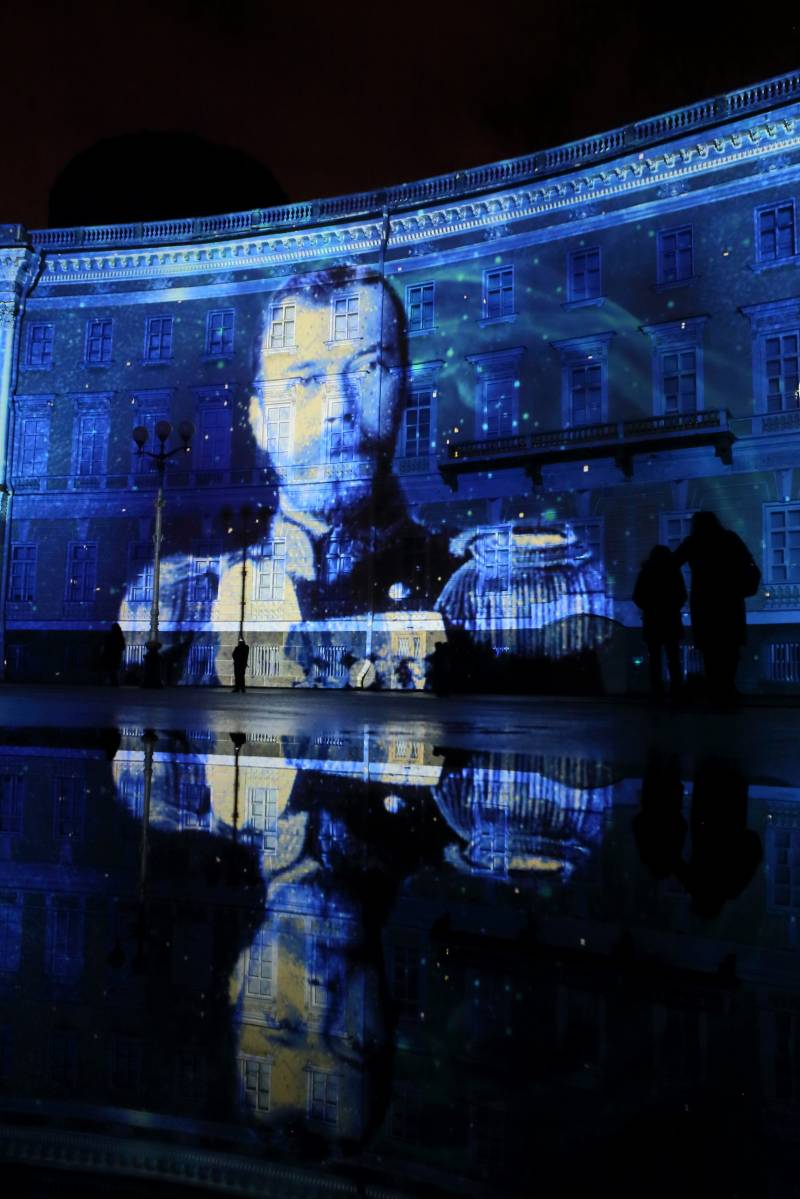 St. Petersburg. Festival dedicated to the 100 anniversary of the Russian revolution and National Unity Day

Representative democracy is a false illusion used by thieves and oligarchs, as it was in Russia of the 1990s. “Such a democracy does not live long,” says Zurab Chavchavadze. “Our democracy is nearing its end.”

By the way, teaching a child in this school costs 560 thousand rubles a year. But the number of her students is growing: 350 pairs of wealthy parents, including politicians and TV stars, decided that their children should be brought up with prayer and a monarchical program.

In the ruling party of Russia, too, it is now fashionable to respond well to royal rule. For example, the head of the Crimea Sergey Aksyonov expressed full support for the proposal to introduce a monarchy in Russia. The monarchy would create "unity" in times of increasing external threat. However, a spokesman for Vladimir Putin said that Putin reacted to the proposal "extremely cold."

On the other hand, in Russia today monuments to monarchs are being erected. Recently, the Minister of Culture presented the statue of Tsar Ivan III in Kaluga. Last year, the president himself unveiled a monument to Prince Vladimir. Mention edition and other monuments. 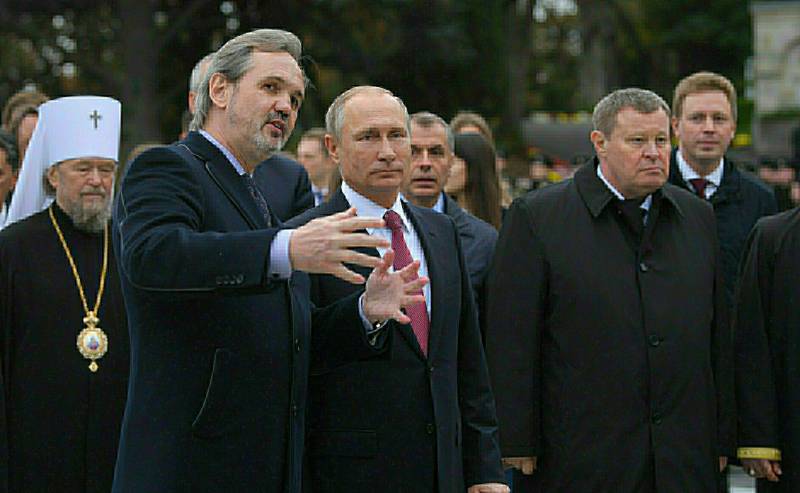 V. Putin at the opening of the monument to Tsar Alexander III

Democracy is the “worst form of government,” says Konstantin Malofeev in an interview with Berlingske. “If you take the countries with the highest GDP per capita, you will see that there are monarchies among the richest countries,” he says.

Is it necessary to make a monarch Putin? Malofeev does not want to answer such a question. But he hopes that the presidential election in 2018 will be the last in Russia. “But we very much hope that the elections in the 2024 year will not happen and that Russia will again become a monarchy,” says Malofeev.

However, monarchical ideas in Russia, if, of course, according to polls, are not very popular. At least not popular.

Most people do not support the return of the monarchy - this is noted among others and the above-mentioned newspaper "Berlingske". Surveys conducted this year show that 68% of Russians are opposed to monarchical rule.

At the same time, we must not forget that the number of supporters of the monarchy is slowly growing. Another survey showed that 28% of the population "to some extent" supports the idea of ​​introducing monarchy. Ten years ago, 22% had such supporters — six percentage points less.

Without a doubt, the activities of the respective schools to one degree or another popularize monarchical ideas in the country. It is also noteworthy that other school teachers are already hinting at the close end of democracy in Russia. This can happen in a little over six years, in the 2024 year. In this case, the election 2018 year will be the last.

Ctrl Enter
Noticed oshЫbku Highlight text and press. Ctrl + Enter
We are
Results of the week. "And in general, the first infantry Vanya will sign the first there"Project "ZZ". Grandma said in two?
Military Reviewin Yandex News
Military Reviewin Google News
32 comments
Information
Dear reader, to leave comments on the publication, you must to register.