November 29 2017
75
Once in Dresden armory ward, of course, the first thing I turned my attention to the knights in the richest and most magnificent armor. Truly, you can look at them from different angles for a very long time. The skill of their creators was very high, so sometimes you just wonder how it was created at all. However, aliens with lasers have nothing to do with it, as well as fake villains from the world historical the mafia. These armors have been described many times in the past. Granted, sold and resold, so each of them has its own, and a long "credit history". And today we, firstly, will tell you about some technological methods of designing knightly armor from 1410, and secondly ... we will show many wonderful armor "close-up" and in detail. 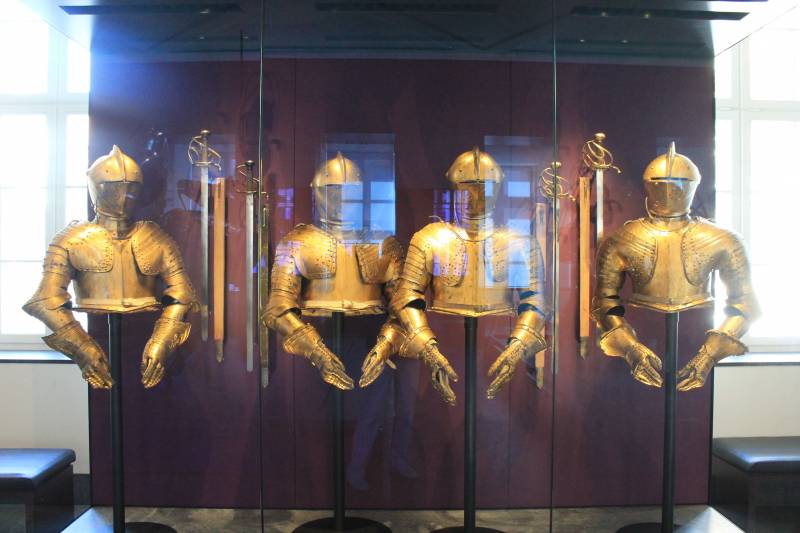 The easiest way to protect the iron armor from corrosion was to gild them. And beautiful, and rust does not take. Well, from the inside it was possible to clean them! Reitarskie armor times Thirty Years War. (Dresden Armory)

As is known, the first all-metal knightly armor appeared around 1410 of the year. Prior to that, they had a chain mail barmitsa, so they cannot be considered fully solid-forged. There were no decorations on them, or rather, it must be said so - the polishing of the metal was their only decoration. However, even then there were originals, such as, for example, a certain knight, John de Fearles, who in 1410 gave the pound sterling to the Burgundian 1727 gunsmiths XNUMX, that is, ordered completely time thing. That's really Burgundians, probably surprised. But very soon the look of simple polished iron ceased to respond to the aesthetic tastes of Western European knighthood. The situation of the time of the “epoch of chain mail” was repeated, when all the figures acquired a dark metallic color and it became completely impossible to distinguish them. 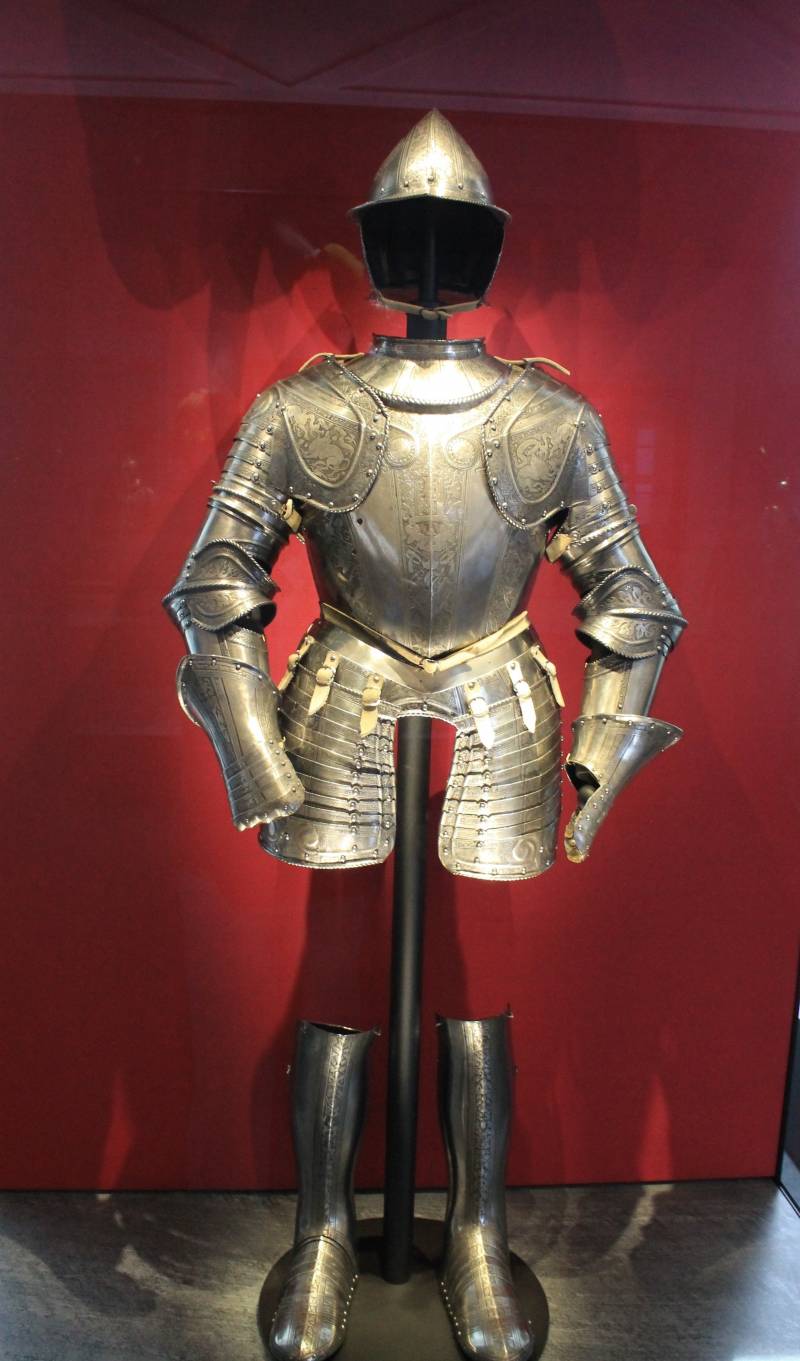 The armor in the Pisa style, that is, made in the city of Pisa. Northern Italy, 1580 g. Their design is made by etching. The background is selected, so a flat image remains on the surface. (Dresden Armory)

Now the knights turned into statues of polished metal, and the problem with their identification arose again, especially since the knighthood at the time began to give up shields, and already in the 16th century refused almost completely. 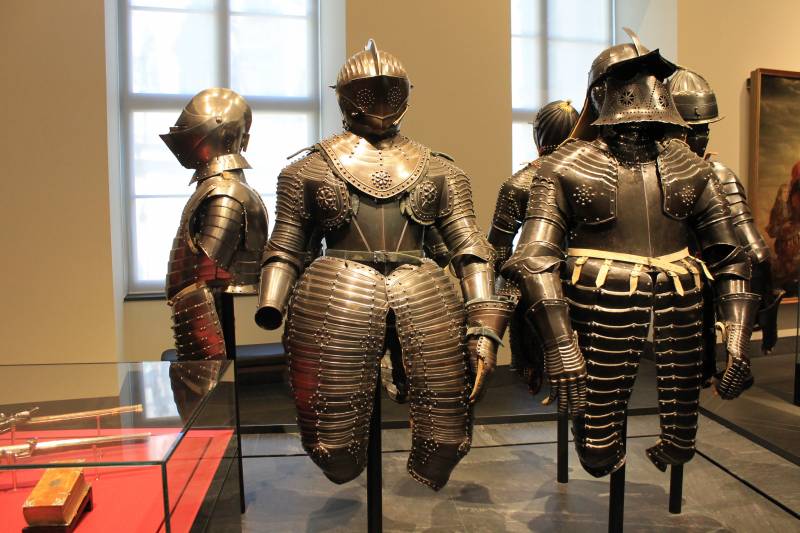 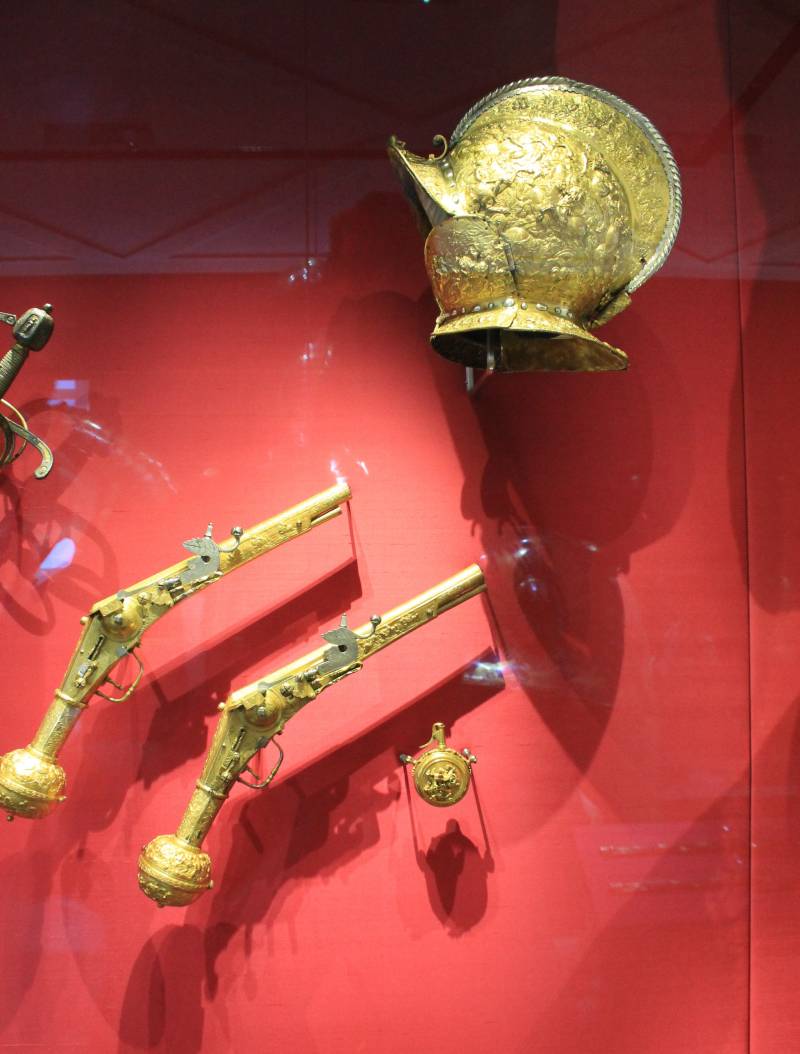 In addition to armor, or rather, a number of different weapons are exhibited next to them in the Dresden Armory. Accordingly, the swords of these riders are also exhibited next to the Raitar armor, but the main thing is the pistols belonging to them, which can rightfully be considered masterpieces of weapons. Usually these are two-wheeled pistol headsets. They were worn in holsters at the saddle with the arms forward, so as not to sit on them accidentally when landing in the saddle. But it is clear that there were always people who wanted to arm themselves "to the fullest." And then they wore two more pistols behind the lapels of their boots and one or two behind the belt. So six shots at the enemy of such a horseman were guaranteed, unless, of course, the castle refused. In front of you is a hammered, fully gilded helmet, a pair of similarly decorated pistols with wheel locks and a powder flask. Pistols are marked with CT letters. Place of production Augsburg, until 1589 g. (Dresden Armory) 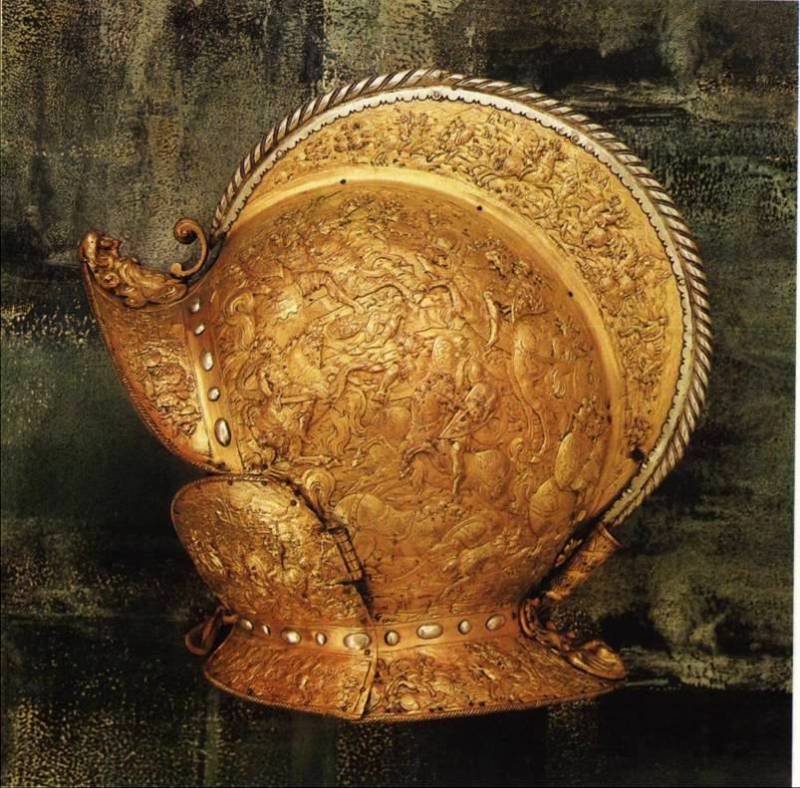 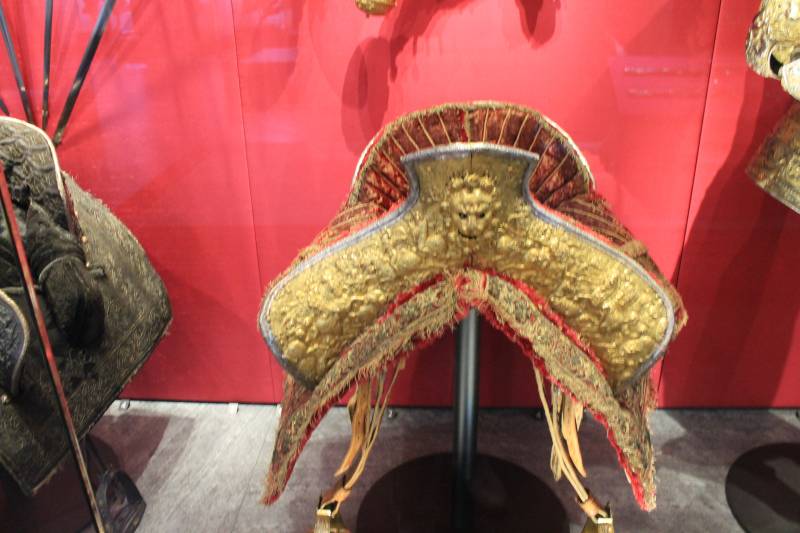 Well, this is the saddle from the headset, which included this helmet, pistols and powder box. So after all a little of all this seemed! The saddle was also decorated in that technique !!!

It was possible to cover the armor again with heraldic robes, and in some cases the knights did, but the technology for coloring iron in different colors became very popular. The most common staining method was bluing a dark blue color. It was produced on hot charcoal, and the master gunsmiths, especially Italian, were done so skillfully that they learned not only to achieve uniform coloring of large items, but also to get any shades. Very appreciated the armor, painted in purple, as well as in red (sanguine). Milan had a gray color, well, and the traditional black bluing, which was obtained by roasting parts of armor in hot ash, was used everywhere and very often. Finally, in Milan in the 1530-s bluing brown color became fashionable. That is, the armor remained smooth, but it was already colored. It should be added that both gilding and silvering of armor were not forgotten. 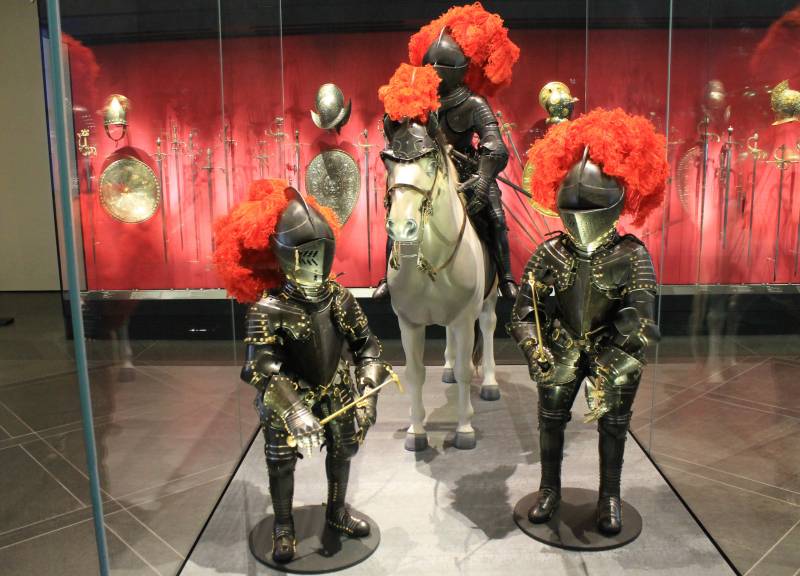 The armor was made not only for adults, but also for children, so that they could learn to wear them from early childhood. These blued armor are for children! The work of master Peter von Speyer, Dresden, 1590 (Dresden Armory) 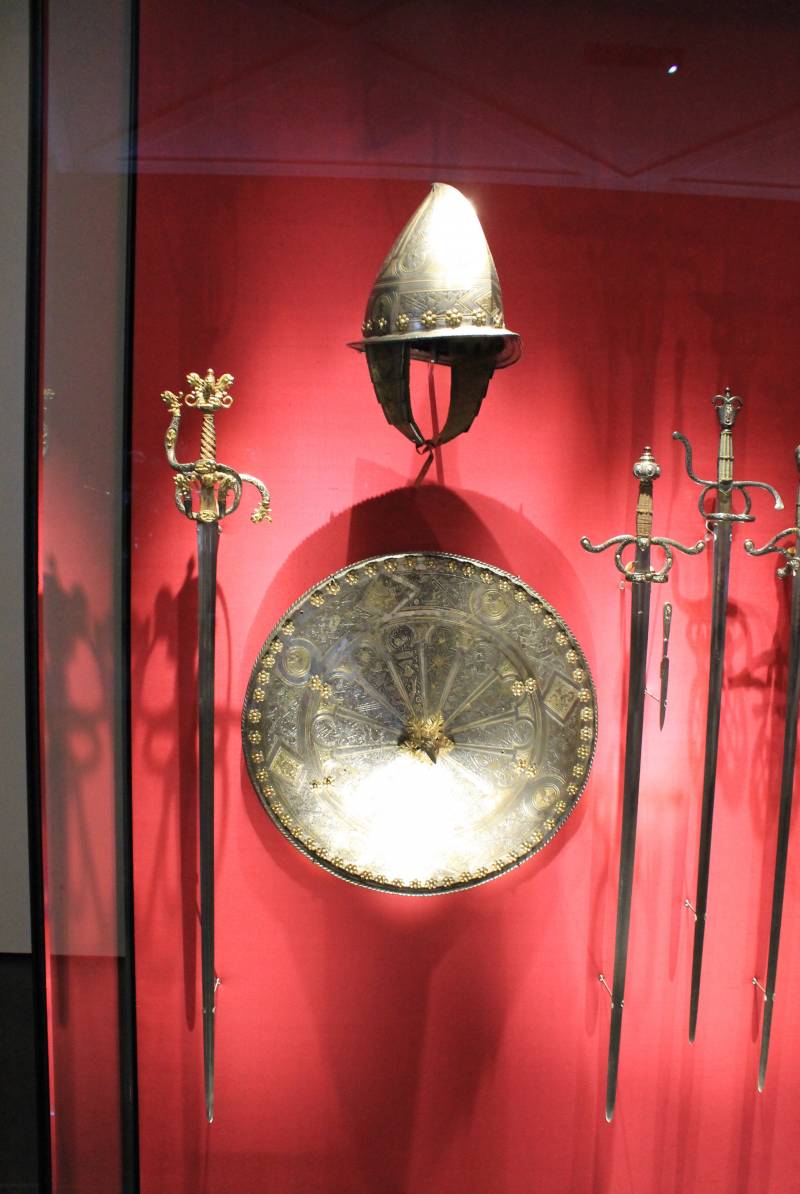 But this pikinersky helmet "sweat" (pot) or a cabinet and a shield. Both products are engraved and gilded. Nearby Walloon swords. Augsburg, 1590 (Dresden Armory) 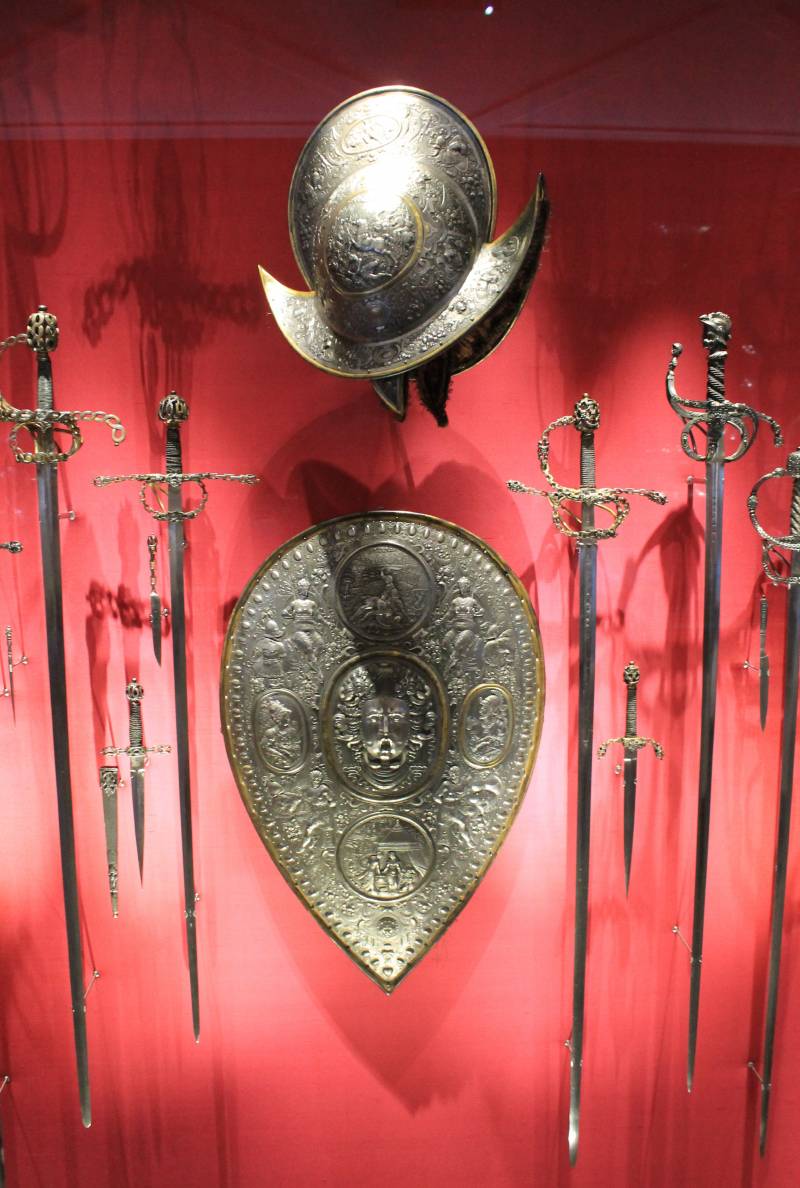 Morion and shield, with the shield in the form of an "inverted drop." Chasing on iron. The second half of the XVI century. (Dresden Armory) 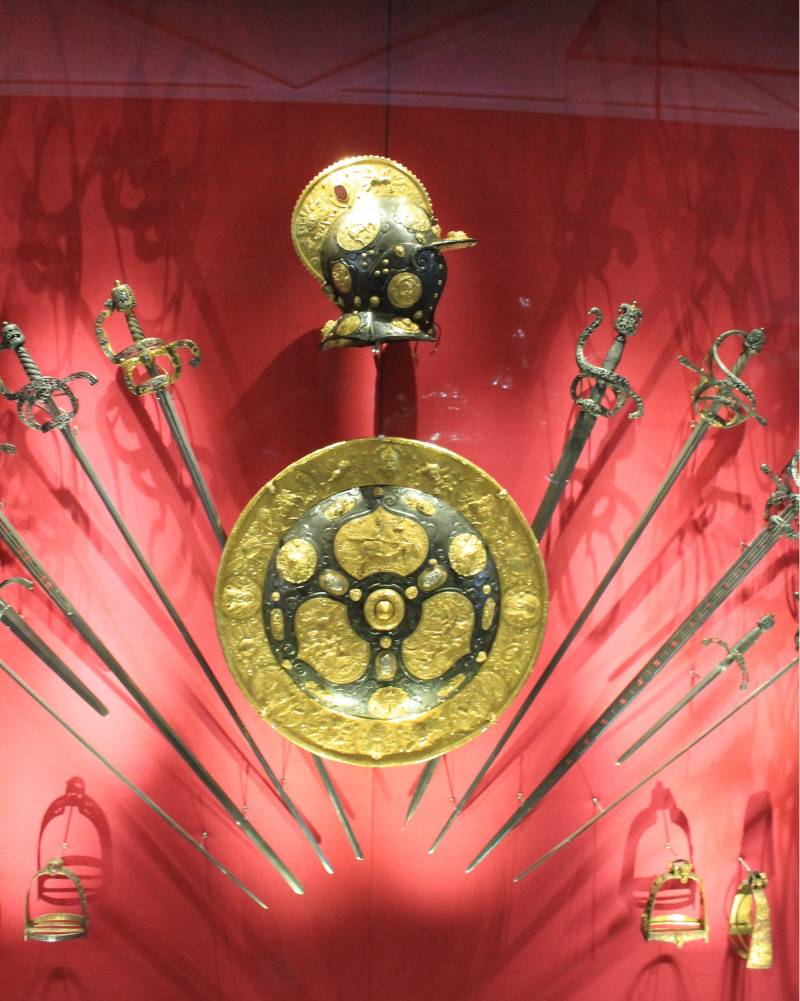 Burgonet and shield. Decorated with blackening and gilding. Augsburg, 1600 (Dresden Armory) It is clear that in such helmets and with such shields no one went to battle. All this ceremonial equipment of the court guard of a duke or elector, designed to impress his guests and potential allies and opponents.

Then, in Italy in the middle of the 15th century, they began to use engraving to decorate armor and shields, and from the 1580s to combine it with gilding. The easiest way was chemical using golden amalgam. Gold was dissolved in mercury and the product was coated with this mixture, after which it was sent to the oven to heat it. At the same time, mercury evaporated, while gold was tightly combined with iron. Then the surface of the product could only be polished and the armor took on an exceptionally rich look. But this technique can not be called perfect. The method was also dangerous for the master himself, since there was always a danger of breathing in mercury vapor. On the other hand, such gilding was very solid, although it required a lot of gold. 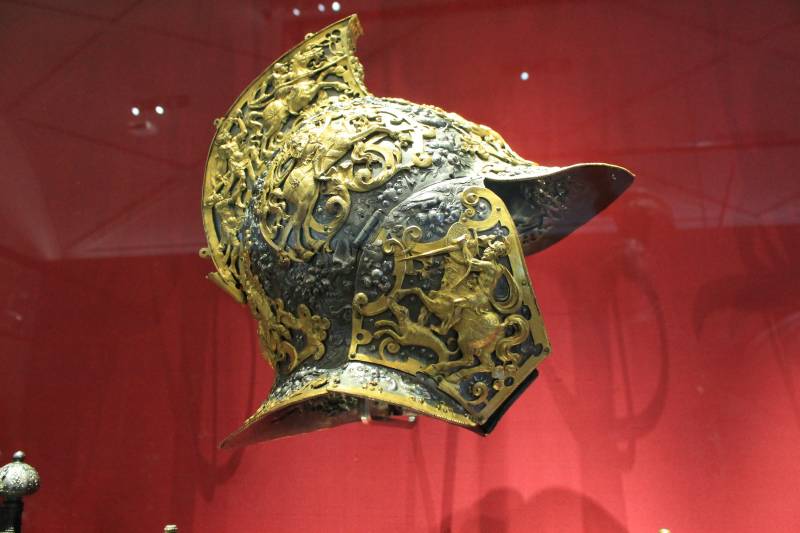 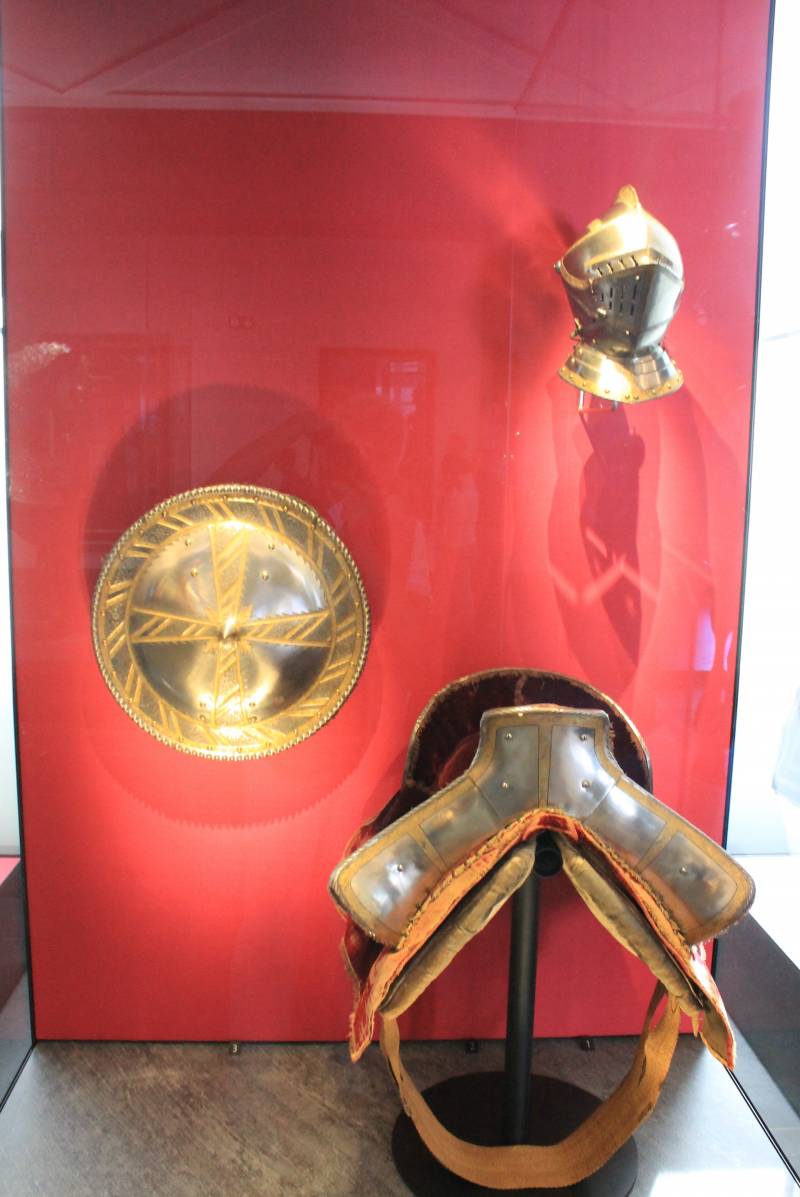 Arme helmet, armored saddle and shield. Presumably Augsburg or Nuremberg, the second half of the XVI century. (Dresden Armory)

By the end of the 15th century, plates of armor and shields began to be decorated with edging, which were made by etching. There was a method of high etching and deep etching, which differed in whether the image on the surface was convex, and the background was in-depth, or vice versa. In the first case, a very flat terrain was obtained, while in the second, the image was close to the copper engraving technique. That is, durable varnish or wax was applied to the armor detail. According to it, a drawing was made with an engraving needle and filled with acid, sometimes repeating this operation two or three times. Then drawing trimmed with incisors. Etching combined blackening and gilding. When blackening, the black and caustic mineral oils were rubbed into the resulting grooves, and then the part was heated. The oil evaporated, and the black bonded to the base metal. When etched with gilding gilded usually flat grooves of a sufficiently large area. 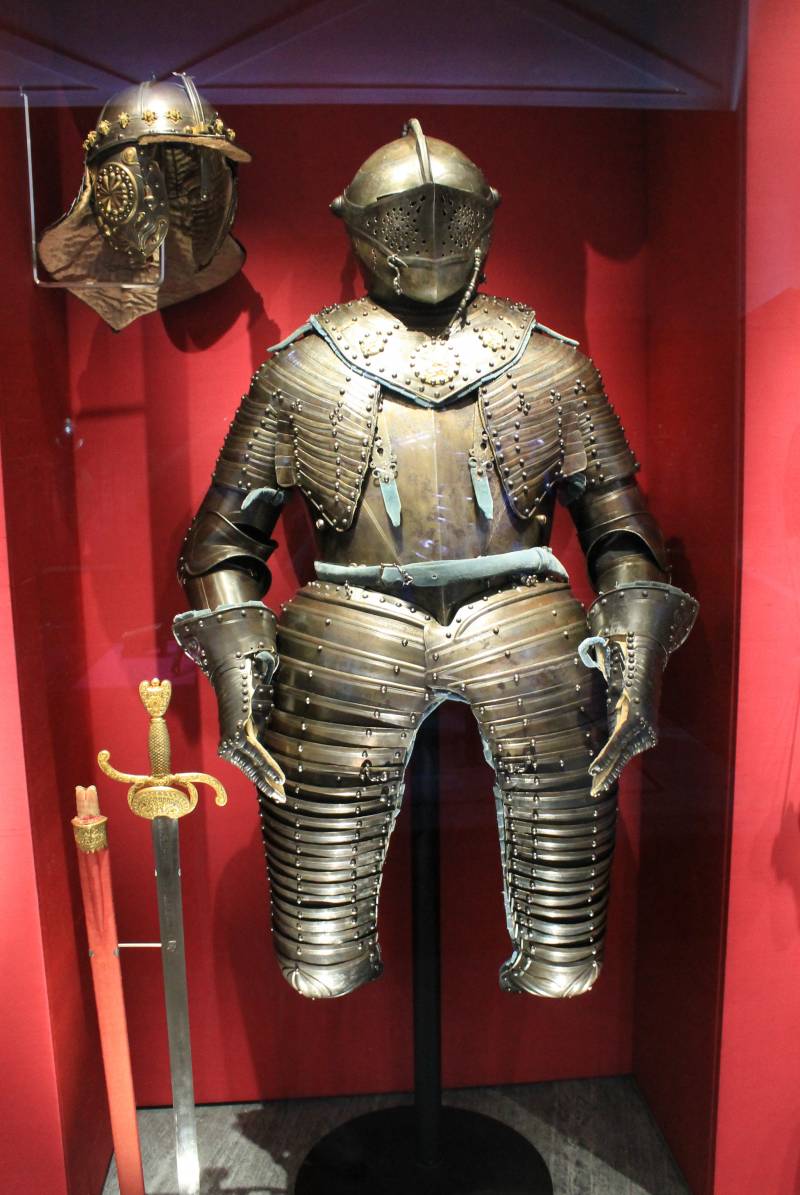 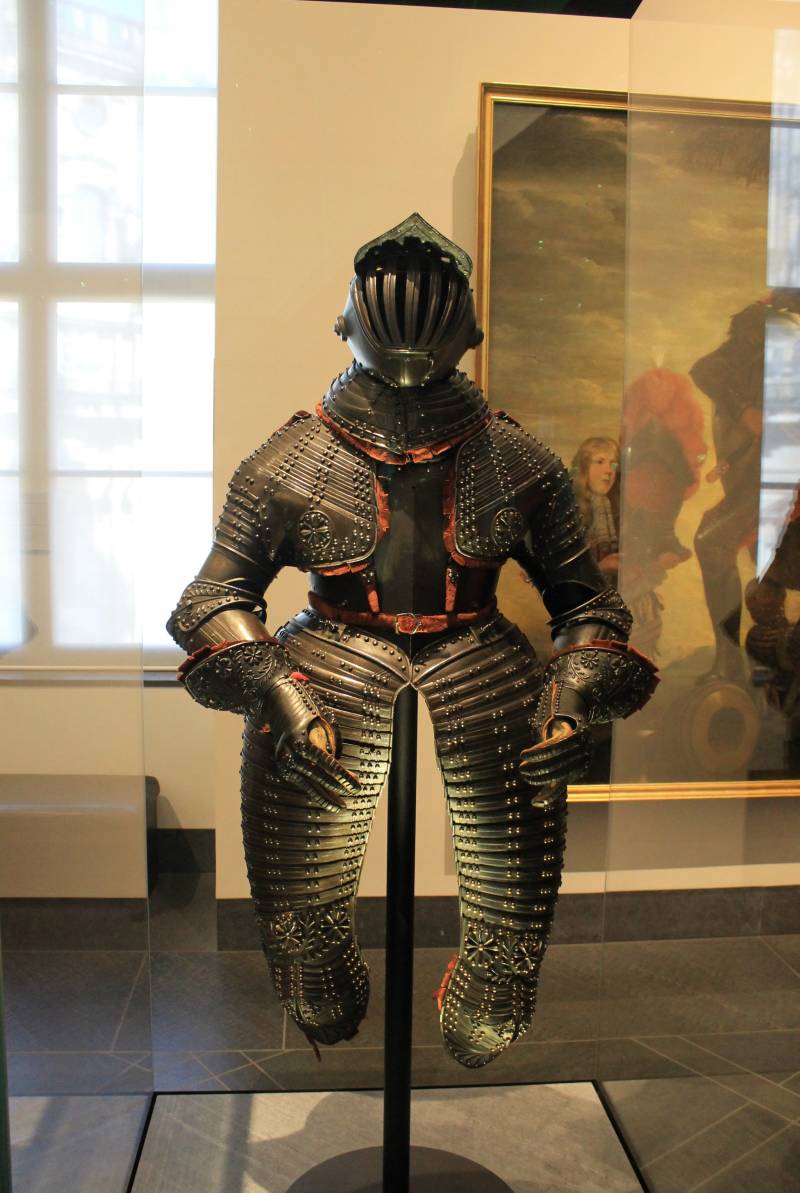 Another set of so-called three-armored (they were also called field) armor, which belonged to the Saxon Elector Johann-George II, the work of master Christian Muller, Dresden, 1650 (Dresden Armory) 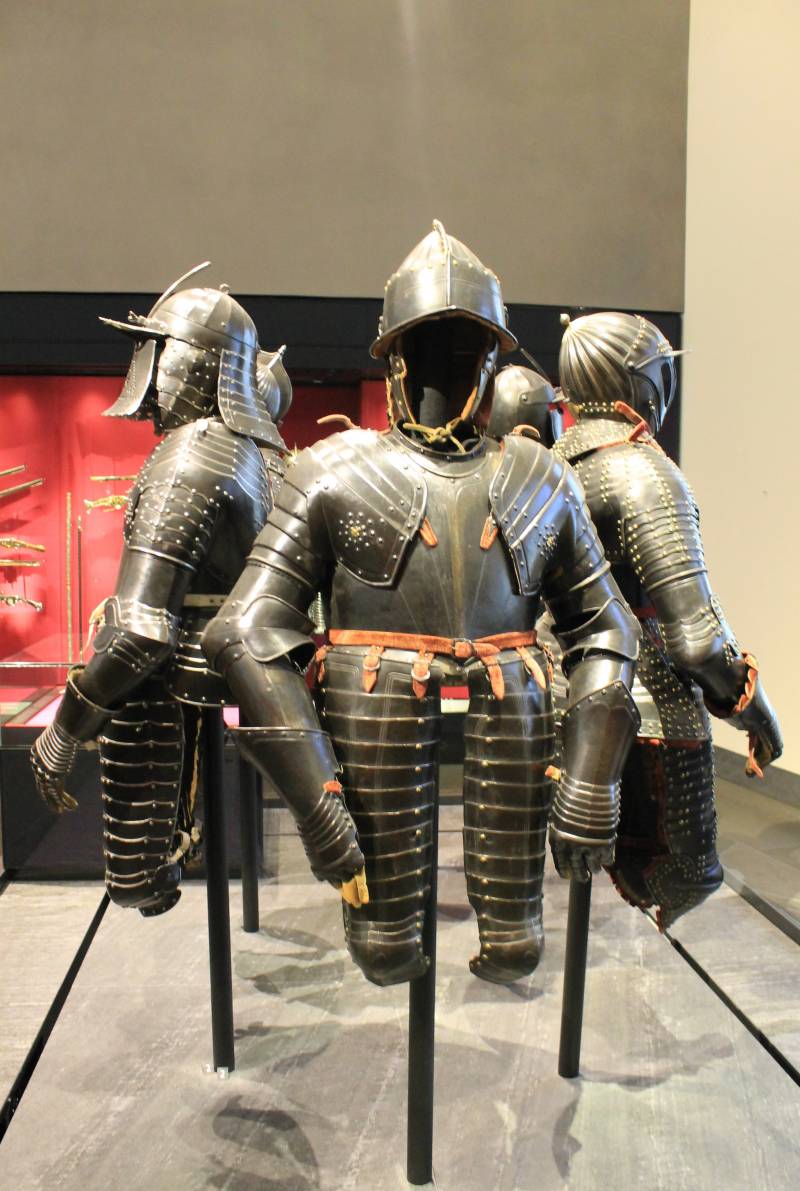 Etching of the grooves during etching was usually carried out with a mixture of acetic and nitric acid, as well as alcohol. Of course, the master kept the recipes of these mixtures in strict secrecy. However, the main thing in this technology was the experience of the master. It was necessary to catch the moment when it was necessary to drain the acid so that it did not corrode the steel too deeply or so that the drawing did not come out indistinct. 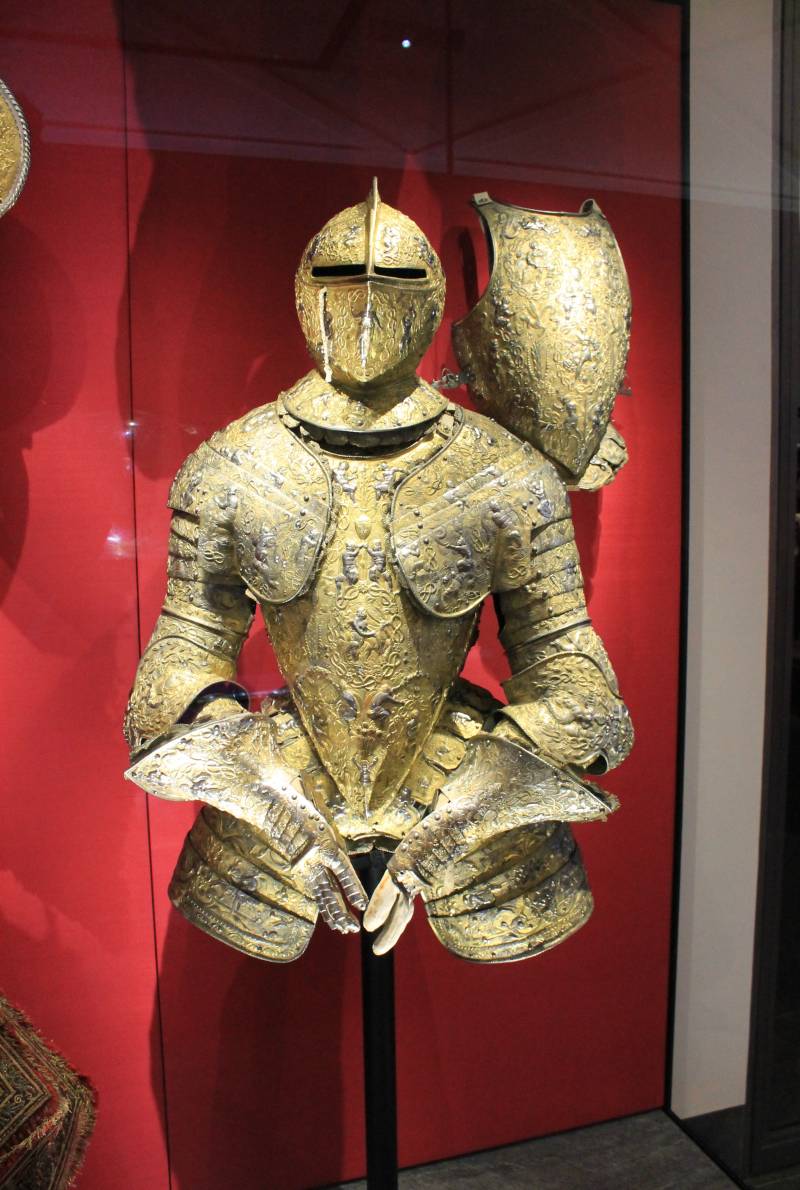 Over time, the masters learned to combine various techniques. They used stamping, etching, carving, gilding and silvering, black and colored metal. The result of these delights are, for example, such French parade armor, made before 1588, in front of you a parade set with an additional chest plate for the cuirass. (Dresden Armory) 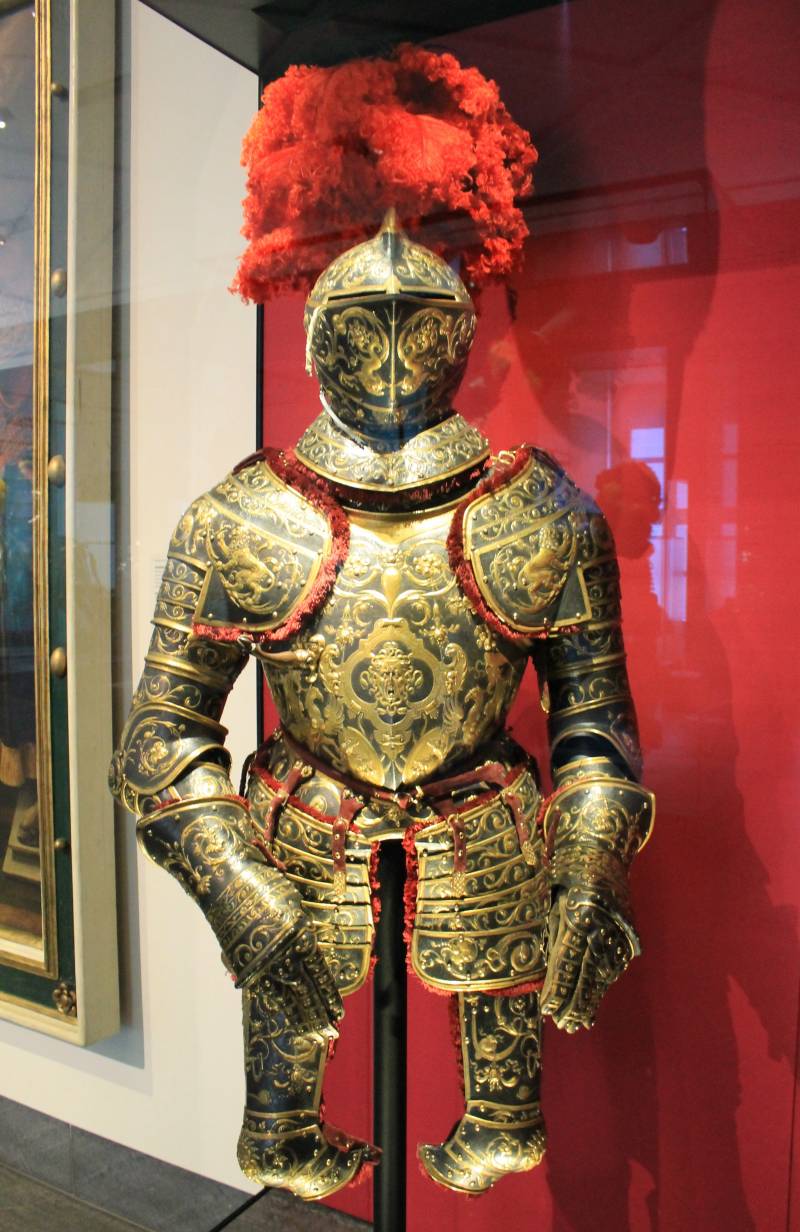 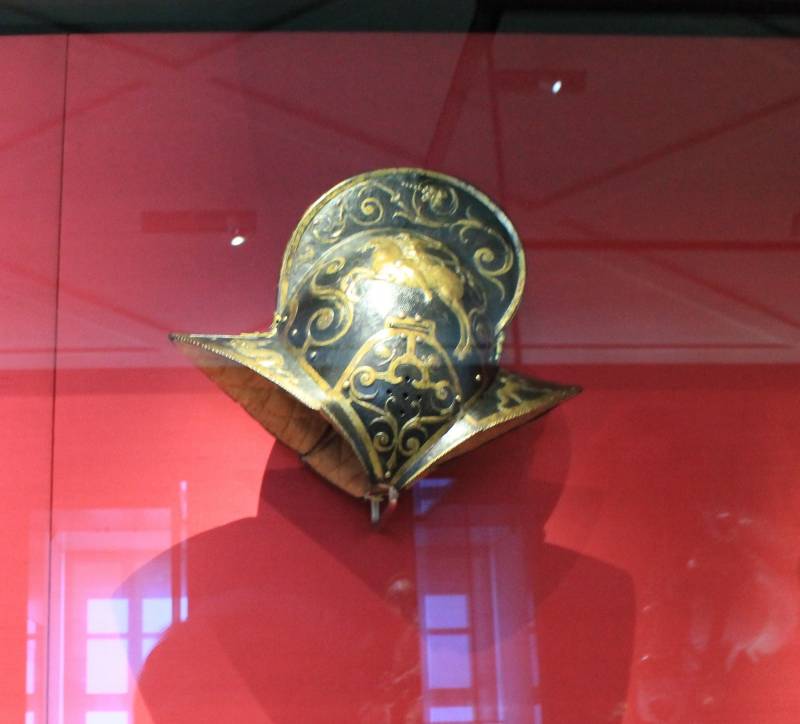 A helmet is a Morion for this armor, in case his owner would like to remove his fully closed armor helmet. 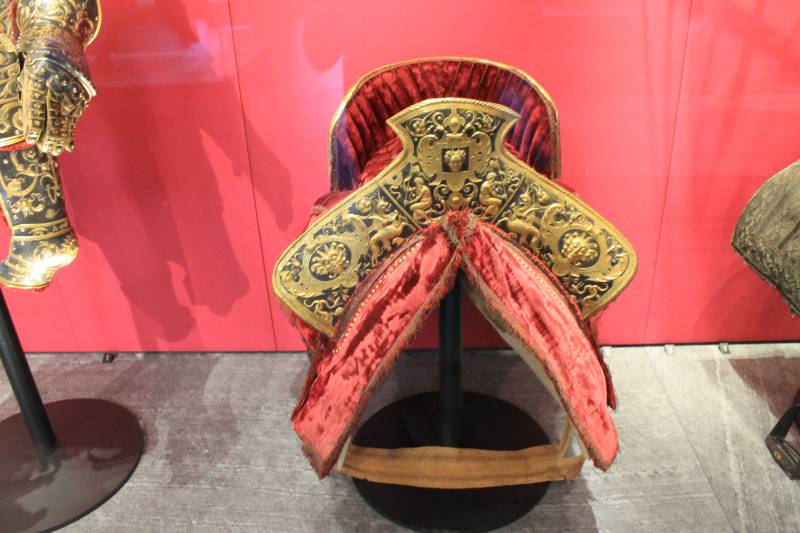 And the saddle, without which, according to the views of that century, the headset could not be considered complete and perfect.