November 29 2017
15
In a recent article about Italian compact pistols armory Beretta mentioned the subcompact Beretta Px4 Storm. This gun is made on the basis of a full-sized sample, which differs not only in its weight and dimensions, but also in an not quite ordinary design, which is rarely seen in modern short-barreled weapons. The gun is really interesting and has proven itself in the civilian market, so getting to know it in more detail will not be amiss.


The appearance and ergonomics of the gun Beretta Px4 Storm

The key moment in the development of this weapon, the designers made it fully adaptable to the needs and capabilities of a particular shooter. The general combination of various options of various units makes this pistol more likely a sporting weapon rather than a military one or a means of self-defense, which, however, does not exclude its use in these areas. 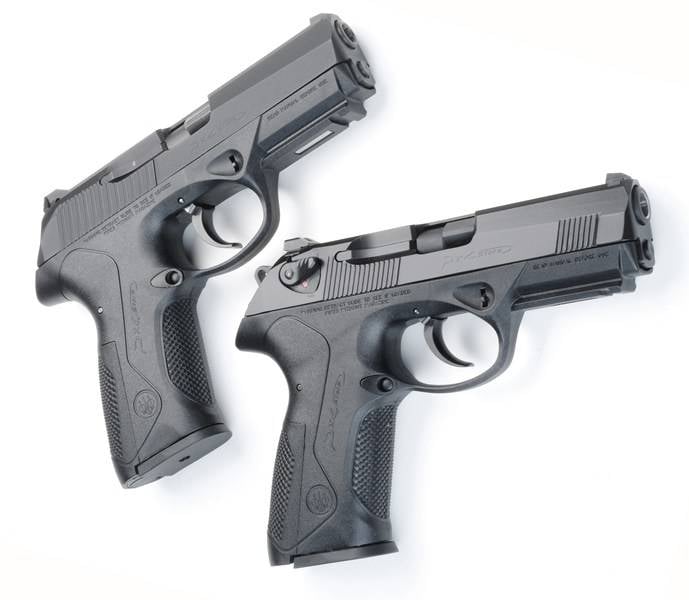 You need to start with the fact that the gun, despite its size, actually has no parts that can prevent it from being removed from a holster or even a bag. All faces of the weapon are rounded, which makes its appearance less aggressive than we used to see in modern pistols. However, the appearance is deceptive, and the Beretta Px4 Storm pistol is not only not inferior to its competitors in performance, but surpasses many.

The fit of the weapon to the size of the palm of the arrow is already standard for modern short-barreled weapons - interchangeable pads on the back of the pistol grip. However, the ability to change the dimensions of the handle is the main feature of the "fit" of the weapon. The Beretta Px4 Storm Pistol has 4 variants of trigger mechanisms, among which everyone will find a more acceptable and suitable trigger for them. 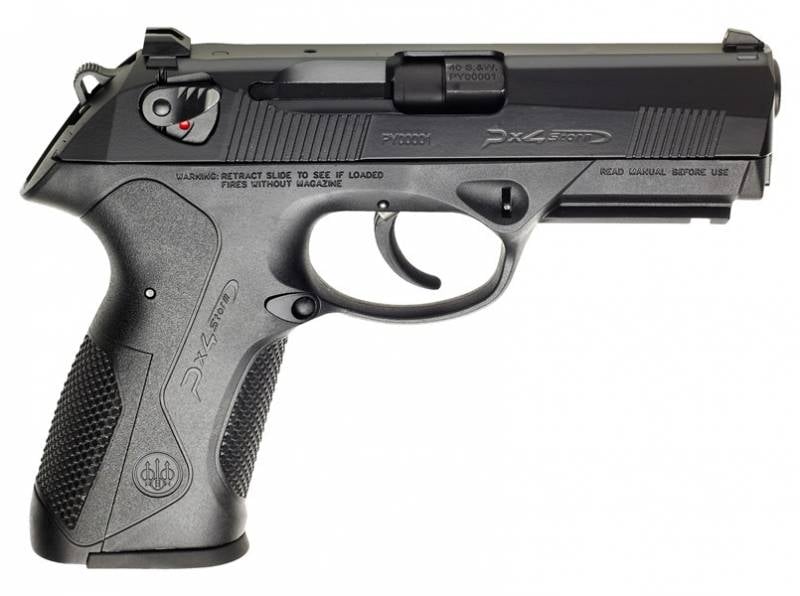 Sights are interchangeable, can be replaced by more convenient or familiar for a particular shooter. Due to the design features of the automatic weapon, the gun can be equipped with a collimator sight instead of the rear sight, while it will serve much longer than on other weapons. Under the barrel in the frame of the weapon there is a seat for a compact flashlight or laser designator.

The gun cannot boast of full double-sidedness, since the slide-stop lever is located only on the left side of the weapon. The magazine eject button can be rearranged, and the fuse switch or soft release lever is duplicated on both sides of the cover / shutter. 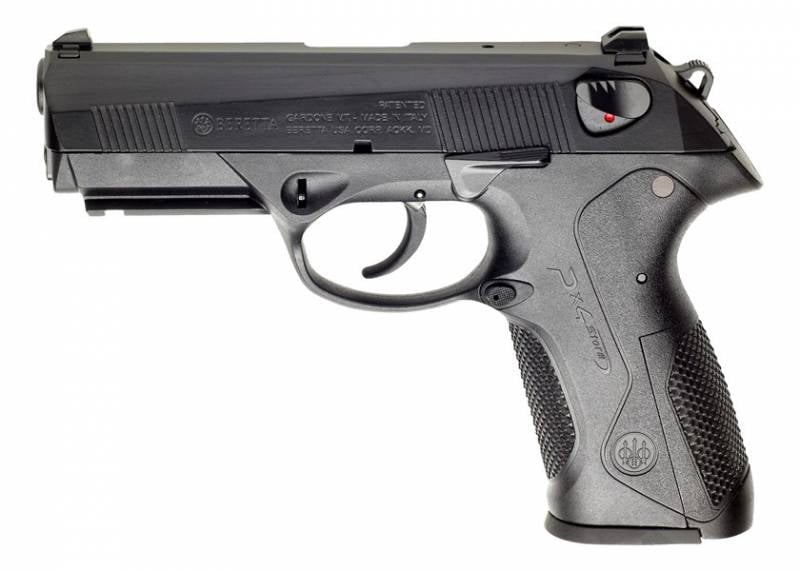 The design of the gun Beretta Px4 Storm 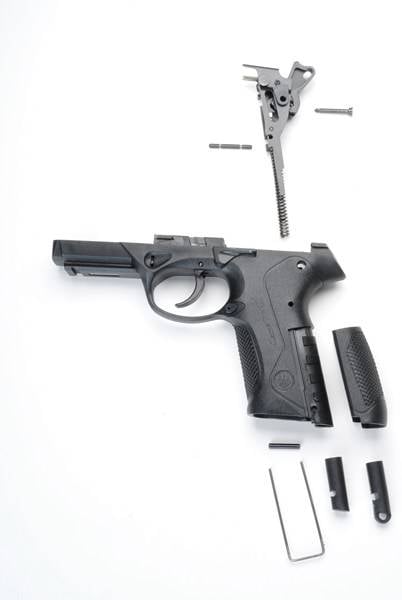 The main feature of the design of the gun Beretta Px4 Storm is its scheme of automation, but before you get acquainted with it you should consider various options for trigger mechanisms.

All variants of the trigger gun Beretta Px4 Storm have one thing in common - they are hammer, which should appeal to many who do not trust udarnikovym trigger mechanisms. At the moment there are 4 options USM.

A double action option with a two-way fuse switch, which, when turned on, ensures a smooth descent of the trigger is denoted by F.

The trigger mechanism of double action, but without a fuse is designated as G. In this version of the trigger, there is no fuse, the controls on both sides remain in place of the fuse switches, but when they are turned on, only a smooth release of the trigger occurs.

Under the designation D hides self-cocking trigger mechanism. In this embodiment, there is no safety lock, the safety of handling the gun is ensured by a large force of pressing the trigger when fired. Such a decision adversely affects the accuracy when shooting, however, it makes it relatively safe to carry a weapon with a cartridge in the chamber, in case you need to open fire immediately after removal. The trigger is not in this version is not hidden, but the trigger is not in favor of the dimensions of the weapon in the deflated position.

The last variant of the firing mechanism is designated by the letter C. This variant of the trigger is also self-cocking, however, the force of pressing the trigger when shooting is reduced. The trigger does not protrude beyond the cover-shutter, there is no fuse switch. 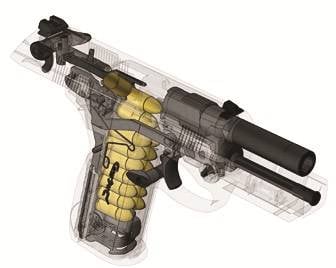 Finally we got to the automatic device gun Beretta Px4 Storm. The automatics of this weapon is built according to the scheme of using the recoil energy in the short course of the barrel; the barrel bore is locked when the barrel itself turns around its axis. For turning the barrel of the weapon, a separate part is inserted into the frame of the pistol with a protrusion that fits into the oblique groove on the body of the barrel. When moving the barrel and the housing-bolt back, the interaction of the protrusion and the groove makes the barrel turn, removing it from the clutch with the bolt group. The locking process is similar.

Such a solution in the design of the weapon gives a lot of advantages. The most important advantage is that the recoil moment is stretched for a longer time than when locking the barrel due to the protrusions entering into the clutch with the casing-gate. Accordingly, the less harsh the recoil, the less it affects both the removal of weapons from the aiming line and the general sensations when firing, which is important for powerful ammunition. 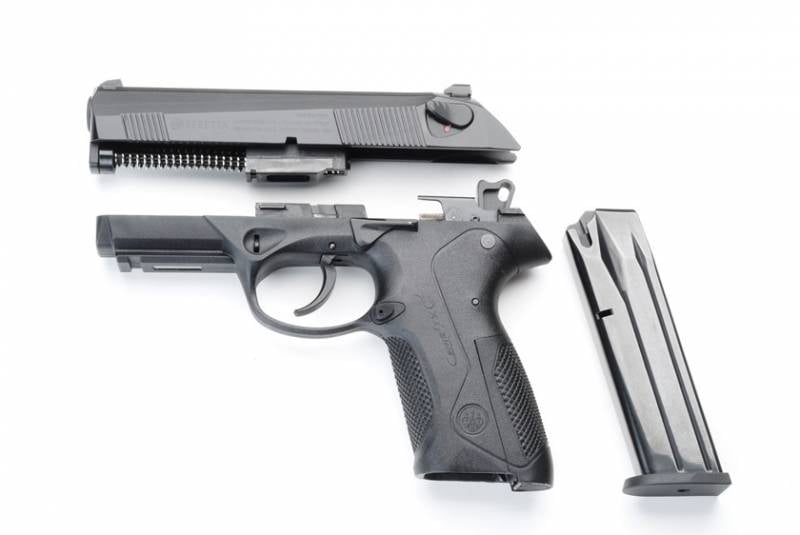 Another positive feature of such a scheme of locking the barrel can be called the ability to maximally lower the axis of the barrel to the pistol grip, which, conversely, will have a favorable effect on the perception of recoil when firing. But here you need to make a retreat, in the gun Beretta Px4 Storm did not fully realize the possibility of reducing the axis of the gun barrel, so there is still room to develop.

As is clear from the description of the characteristics of the weapon on the mass will differ depending on the installed trigger mechanism. The following parameters correspond to guns with trigger F. 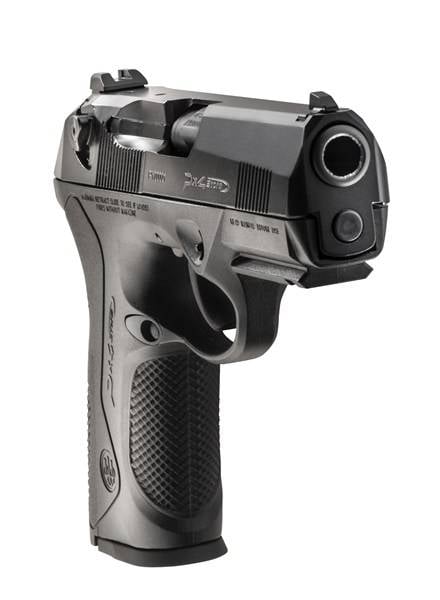 The gun chambered for 9x19 has a mass of 785 grams without cartridges. The total length of the weapon is 192 millimeter with a barrel length 102 millimeter. It feeds a pistol from stores with a capacity of 17 cartridges.

The .4S & W Beretta Px40 Storm also weighs 785 grams. Its overall length and barrel length are similar to a pistol chambered for 9x19 cartridges, but the magazine capacity is only 14 rounds.

The gun using cartridges. 45ACP has a magazine with the smallest capacity - 10 cartridges. The weight of the weapon is 800 grams, and the barrel is extended to 105 millimeters, while the total length is 195 millimeters.

For all guns, the height is 140 millimeters, and 30 thickness is millimeters.

Pros and cons of the gun Beretta Px4 Storm

The main advantage of this weapon is the ability to choose the trigger mechanism, which is needed by the shooter. However, one should not forget about the design features of automation. Thanks to automation, the gun has a much more pleasant return in comparison with its competitors. It is due to the extended recoil moment that the weapon minimally leads away from the aiming line after the shot, which means that you can shoot more quickly and accurately. It should be noted that almost everyone who had the opportunity to try to get acquainted more closely with this weapon, characterize it as a pistol with the lowest recoil when firing. 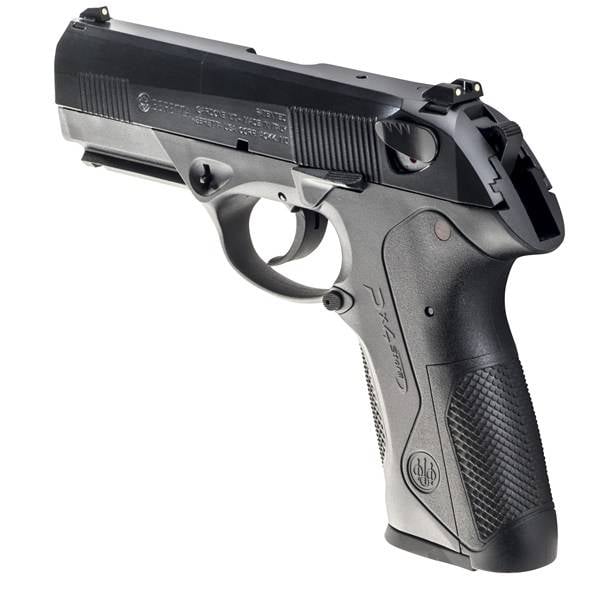 Unfortunately, it is the design of the automation system that is a minus of this weapon. The gun is quite capricious of pollution, requires constant and careful maintenance. It should be noted, and the cost of this weapon, which is slightly higher than that of most well-known models of pistols.

Pistol Beretta Px4 Storm is an excellent example of the fact that in the design of weapons there is still room for diversity. Let the scheme of automation is not new, but it is quite rare for pistols, and the fact that she was forced to work flawlessly, then you can only admire the Italian gunsmiths. 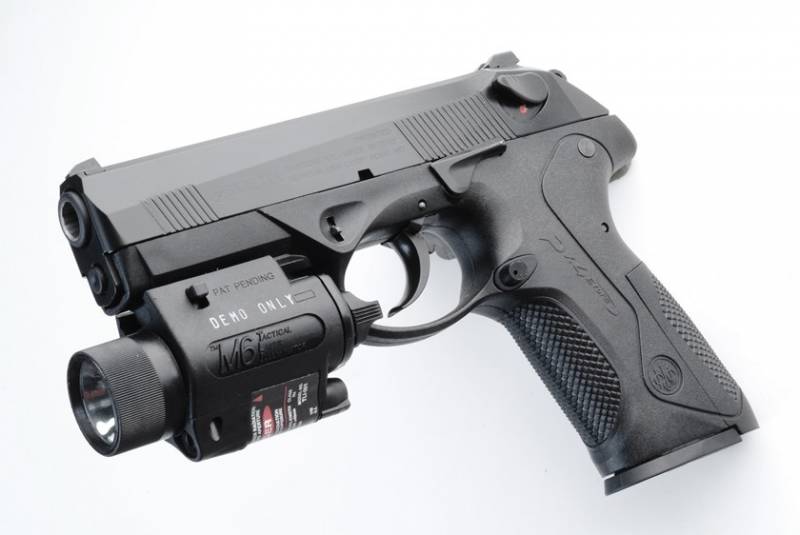 This gun, despite its interesting, can not be called massive. If we talk about it as a means of self-defense, then there are more appropriate models of weapons. If we consider this pistol as a military weapon, then there are more unpretentious and cheap samples, let it be with lower parameters. Still, this weapon is for practical shooting, so it can be safely attributed to the category of sports, with the possibility of using in other areas other than sports.