November 28, 2017
8
Tachyon is a Russian small unmanned aerial vehicle created by engineers of Izhmash - Unmanned Systems LLC (Izhevsk). For the first time this drone was introduced in the 2012 year. "Tachyon" is designed to monitor, adjust fire, target designation, damage assessment. Effective when conducting aerial photography and video of the area at a distance, if necessary, can be used as a communication signal repeater. Currently, this drone is used in the ground forces, as well as in the units of the Russian Navy.


Scientific and Production Association "Izhmash - unmanned systems" is counting its work with the 2006 of the year. One of the areas of work of the company immediately became the development, production, repair, maintenance, implementation and installation of unmanned aerial vehicles. The company is currently working on expanding the tactical and technical capabilities of its products and developing new unmanned aerial systems. It is worth noting that in recent years, Izhevsk has become a landmark city for Russian unmanned systems. Today, in the capital of Udmurtia, there are three major companies that are developing UAVs. This is the designated Izhmash - unmanned systems research and production association, Zala aero, 51% of whose shares belong to the Kalashnikov arms concern, and Finico, also known as the Unmanned Systems group of companies.

At the same time, drones can become a new brand of Udmurtia. The acting head of the permanent mission of the republic under the President of Russia Mikhail Khomich spoke about this in the framework of the Eastern Economic Forum in September 2017. According to him, for many governors it has become news leadership of Udmurtia in the creation and production of UAVs. Today they find their consumers not only in the military, but also in the civil sphere and are widely represented on the Russian market. 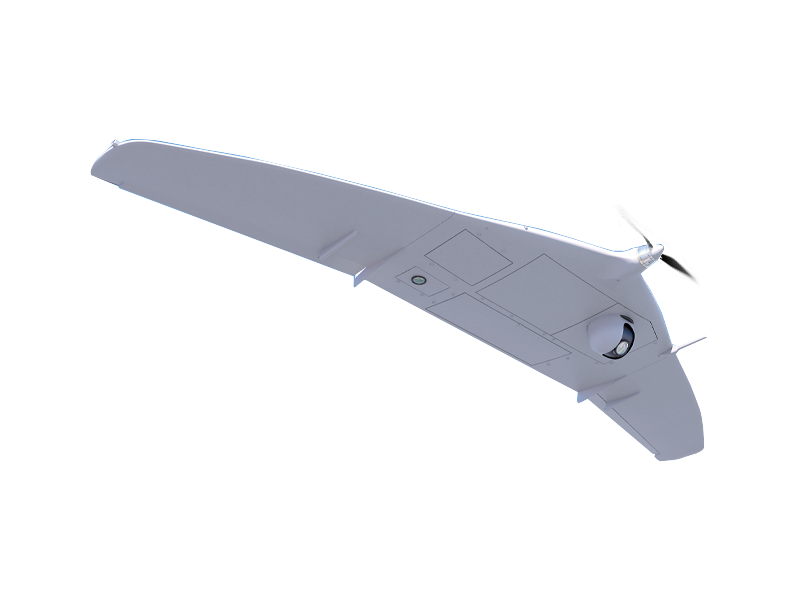 The development and design of the Tachyon unmanned aerial vehicle began at the end of the 2000s, this device was presented to the general public in the 2012 year. At the end of 2014, the drones began to enter into service with the UAV units of the Eastern Military District. Despite the fact that this aircraft was originally developed and intended for use exclusively in the military sphere, its flight-technical and operational characteristics provide the UAV with a high potential. This model is in demand, so the drone is quite actively produced in the framework of the state defense order. In the future, this unmanned aerial vehicle can also be focused on exports to the armies of other countries.

In January 2015, Russia began state tests of a new modification of the drone, which did not work on batteries, but on fuel cells. In the same year, news began to appear about the supply of these drones to the troops, in particular, at the beginning of 2015, they had entered into service with the intelligence units of the Central Military District (CVO), and in 2016 they had been armed with a Russian military base in Armenia. More recently, information appeared in the Russian press about the creation of the Caspian flotilla new special forces. A detachment of "coastal commandos" is created on the basis of a detachment of anti-sabotage forces and assets (PDSS) of the Caspian flotilla. It is reported that, in addition to other things, the Tachyon drones will go into service with this unit. They will help special forces soldiers with secretive landing of reconnaissance groups ashore, as well as in the detection of enemy saboteurs, including under water.

So the fighters of the special units of the Northern Fleet in 2015 were experiencing Tachyons in bays on the coast of the Kola Peninsula. First of all, they were interested in the possibility of using the drone to detect combat swimmers and their means of delivery at various depths, as well as detecting mobile bases of saboteurs, secrets and disguised ambushes, including at night using special surveillance systems. The possibilities of detecting small and ultra-small objects on the shore, on the water surface and under water were tested. 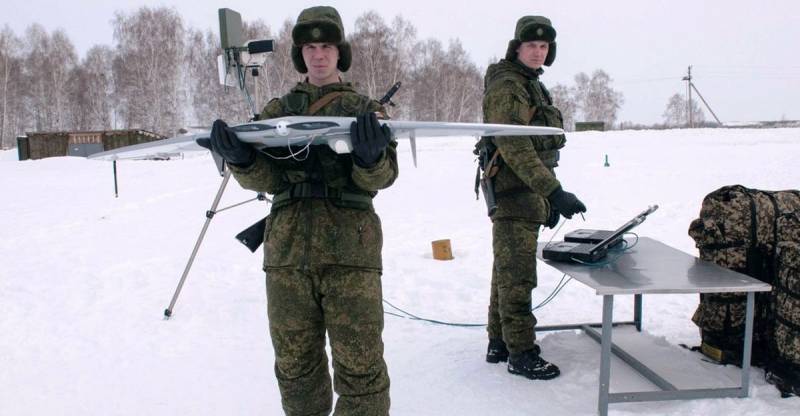 Small unmanned aerial vehicle "Tachyon" developed by the aerodynamic configuration of the "flying wing". This scheme is a type of tailless design with a reduced fuselage, the role of which is played by the wing, which carries all the units and the payload. One of the brightest representatives of the aircraft, built on the "flying wing" is the American strategic bomber B2 Spirit. The Tachyon UAV consists of an airframe with an automatic autopilot control system, a power plant, controls, an onboard power supply system, as well as a parachute landing system and removable target load units, which can vary depending on the tasks solved by the drone. The drone is launched using a rubber catapult, landing - parachute method.

Unmanned aerial vehicle "Tachyon" was specially designed for use in harsh climatic conditions, it can be equipped with a video camera, a thermal imager and other equipment. The device has a small weight and size characteristics and can be used in a wide range of temperatures and altitudes, as well as with a significant wind speed. The starting weight of the drone does not exceed 25 kg, with a payload mass - 5 kg. These small drones can be used in the interests of military intelligence in the daytime and nighttime at a distance of up to 40 kilometers, even in adverse weather conditions, operation is permitted with gusts of wind up to 15 m / s. The Tachyon UAV is able to conduct reconnaissance on a time scale close to real, and can also be used for organizing video and intercom communications, acting as signal transponders.

The small unmanned aerial vehicle "Tachyon" has a fairly compact design, its length does not exceed 61 cm, and the wingspan is two meters. Despite its small size, due to its special aerodynamic shape, it is characterized by high maneuverability and stability in flight. A single electric motor is used as a power plant, which allows the multifunctional device to reach speeds of up to 120 km / h. The maximum duration of the apparatus in the air is limited to two hours. On the Takhion unmanned aerial vehicles equipped with electric motors operating on fuel cells, the energy for flight is generated by an electromechanical generator of electricity. Such an unmanned aerial vehicle uses compressed hydrogen as a fuel, and atmospheric air as an oxidizer. 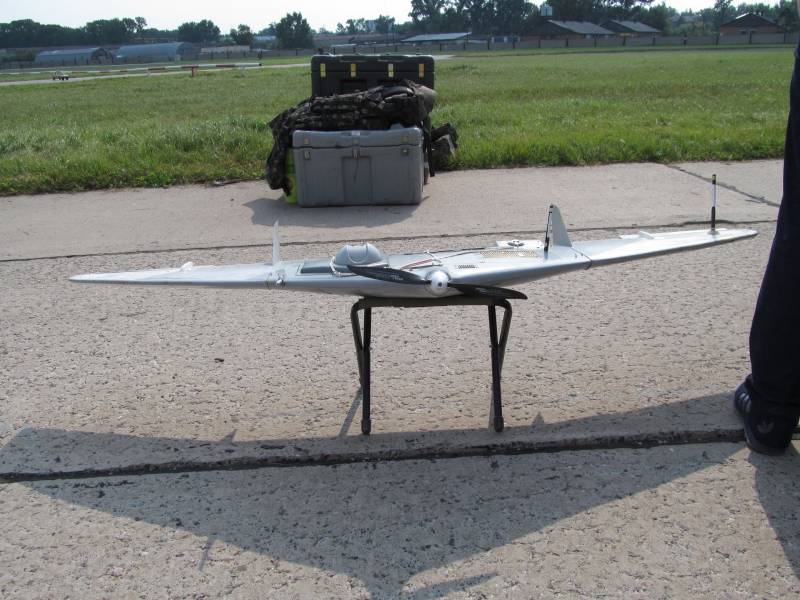 The composition of the unmanned complex: two unmanned aerial vehicles "Tachyon", a set of interchangeable payload modules (camera, camera, infrared camera, thermal imager), ground control station and a catapult. The calculation of the complex consists of two people on the ground. Both work with computers. One of them controls the unmanned vehicle, and the screen of the other displays information coming from the drone.

The use of a drone "Tachyon" during exercises at the general range in Molkino under the Hot Key, January 2016, photo: kuban-spotting.livejournal.com 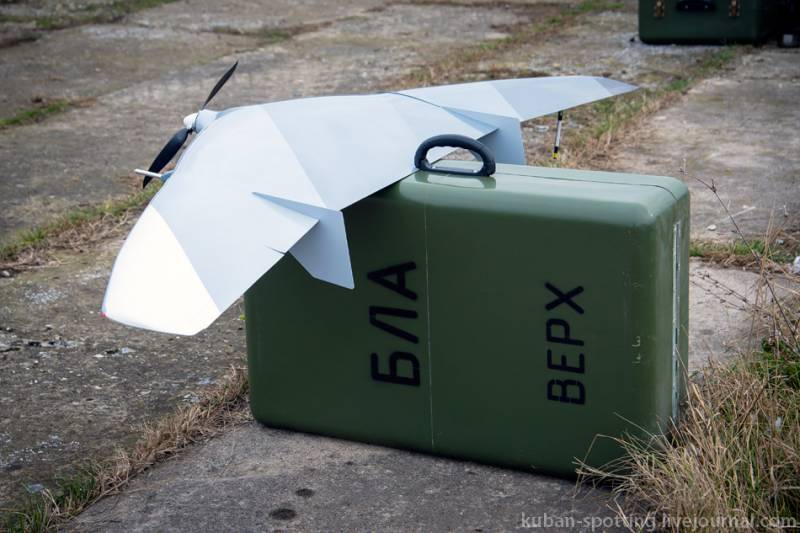 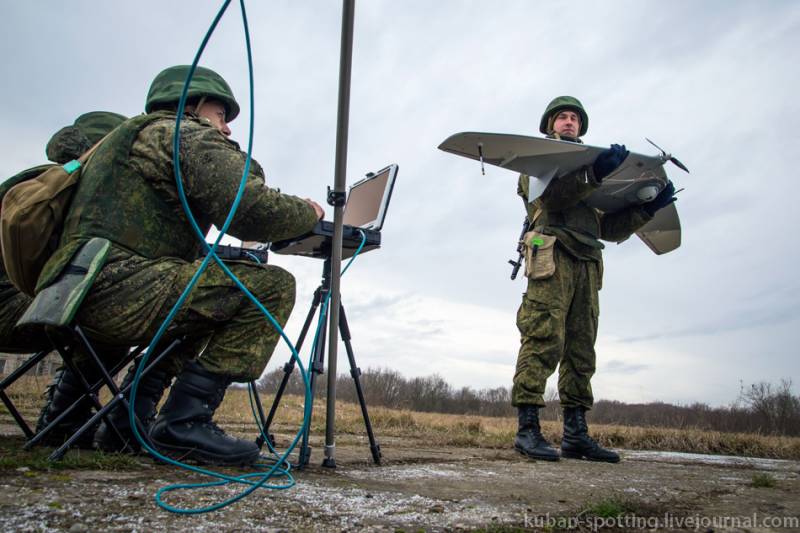 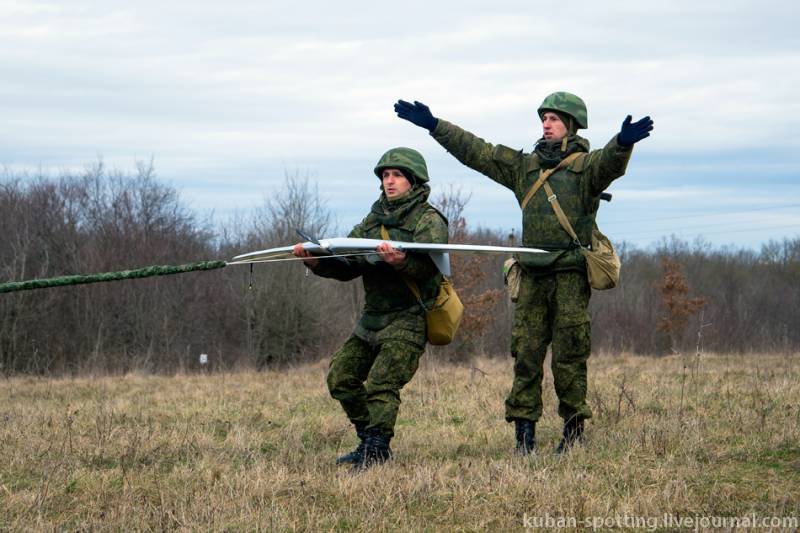 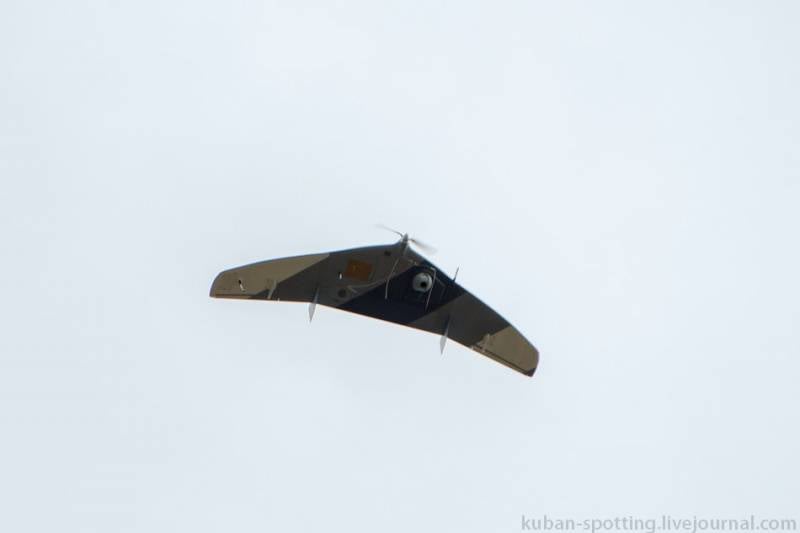 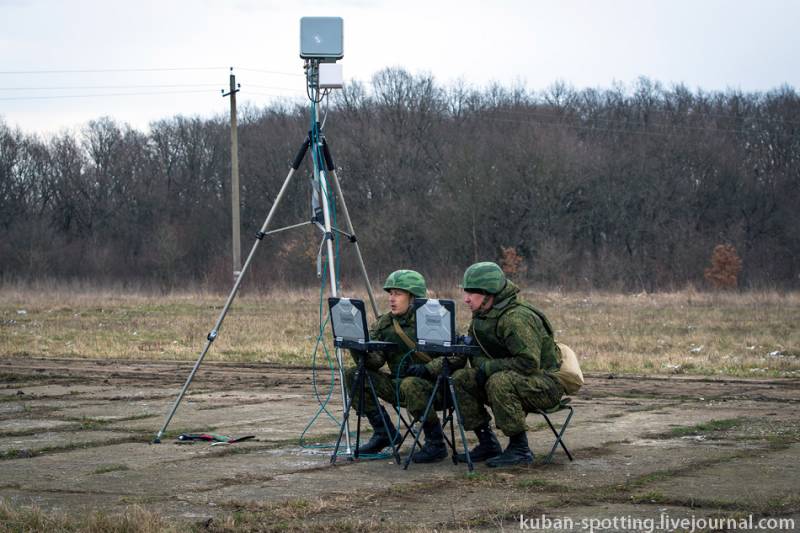 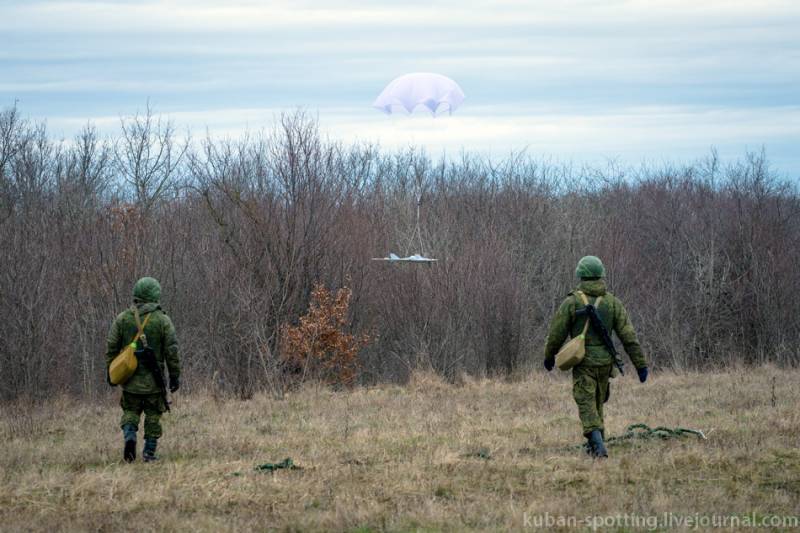 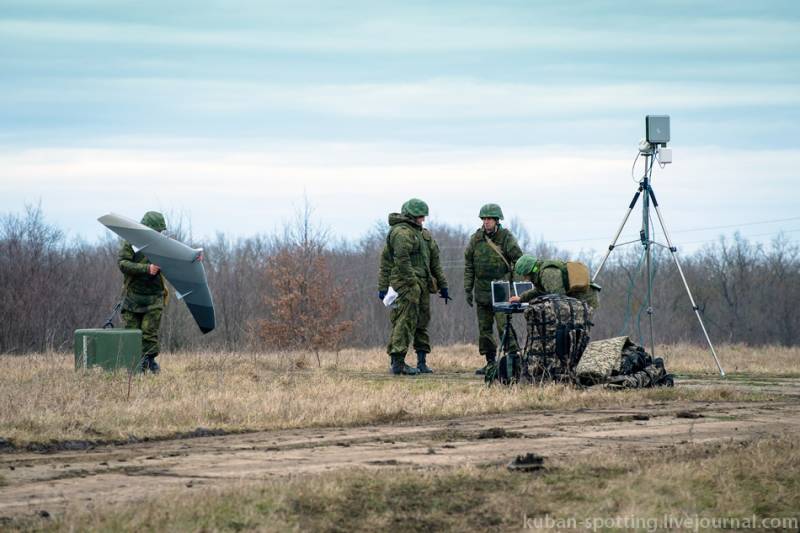