December 1 2017
14
At the end of 60-x - the beginning of 70-x. CSY built the research vessel Akademik Sergey Korolev, which was intended to control spacecraft from any region of the World Ocean. 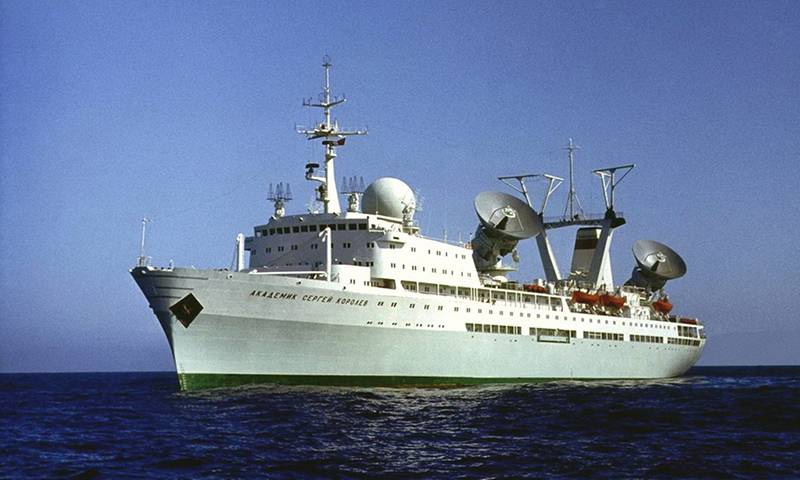 For the needs of science

Still in full swing was the work on the delivery of the order number XXUMX, which was nothing more than the cruiser "Leningrad". A new task has arrived at the Black Sea Plant: to build a ship on which it was planned to deploy a communications system and equipment for controlling space vehicles. The complexity of the situation was that the construction of such a ship was not approved by the 702-summer plan, and the order, which was also urgent, needed to be squeezed into the existing lineup.

3 September 1968 was issued a decree of the Central Committee of the CPSU and the Council of Ministers of the USSR "On the creation of floating measuring points to support work on the HNNUMX-L1 complex to support work on the second Soviet lunar research program." The deadlines were set the most stringent. The Soviet Union was actively exploring space, producing new launches of manned spacecraft, automatic stations and satellites for various purposes.

During rotation in near-earth orbit, spacecraft periodically left the radio visibility zone of communication centers located in the territory of the Soviet Union. Such turns were called "deaf", and the Mission Control Center for some time lost contact with the ship. The problem was supposed to be solved by the construction of special ships to control space flights, which, being in the expanses of the World Ocean, would perform the role of floating communication centers. 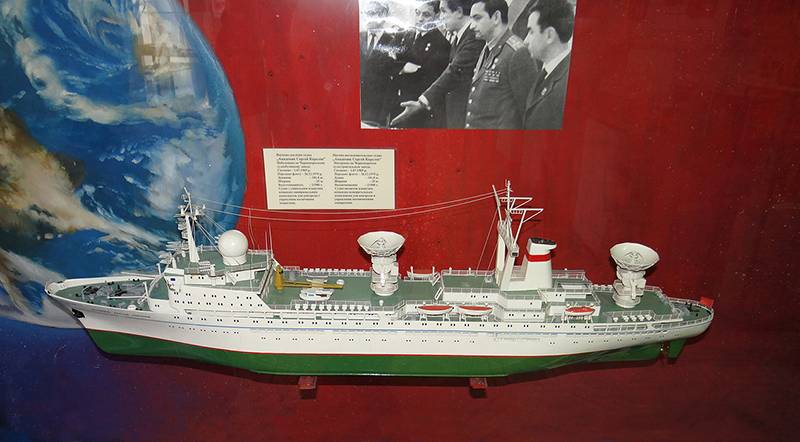 The model of the research vessel "Academician Sergey Korolev" in the exposition of the Nikolaev Museum of Shipbuilding and fleet. Author Alexander G. Vycherov, participant in the Great Patriotic War, European champion in marine modeling 1957 in London

By the time the order was received (mid-1969 of the year), the stocks of the Black Sea Shipbuilding Plant were occupied. On the stocks No. 0, the hull of the universal cargo ship of the Feodosia type 1968 project, laid out in March 1568, was already in a high degree of readiness. The permission was given to use the available technical reserves, materials and equipment from other orders. The Chernomorsudoproekt Design Bureau, which was entrusted with the development of a space communications vehicle project, proposed to save time on the basis of the hull of an unfinished cargo ship, expanding and extending it by inserts.

The side plating in the middle part was to become the inner wall of tanks for fuel and water - one of the requirements for the order was an unlimited navigation area. The displacement of the project reached 21250 tons. Gradually, work on the project gained momentum. Now he got his own name: the project 1908, the code "Canopus". The name of the cipher was chosen by the name of Canopus star, not visible from the territory of the USSR and distinguishable only in the Southern Hemisphere. The ship was given the name Akademik Sergey Korolev, factory building number 704.

In order to reduce the time for the release of technical and planning-technological documentation, factory technologists and designers worked directly at the Design Bureau together with its specialists. Because of the importance of the task for the construction of the Korolev, the most experienced engineering and technical personnel who gained considerable experience during the construction of the aircraft carriers Moscow and Leningrad were abandoned. The main builder of the ship was Ivan Iosifovich Vinnik, later the Hero of Socialist Labor. The director of the Black Sea Shipyard at that time was Hero of Socialist Labor Anatoly Borisovich Gankevich.

To speed up and facilitate the construction process, additional tower cranes with a load capacity of 80 tons were installed near the building berth and a pre-stack area was created for assembling and welding sections and blocks. Moscow constantly had a hand on the pulse of the production process - the plant's management reported on the progress of the work daily to the capital. Once a month we went to Moscow to report in detail, with details.

To accommodate a large amount of equipment, laboratories, instruments, additional space was required. For this, the hull of the failed cargo ship was cut across the mid-frame and an insert was inserted with a length of 12,3 meters. We have made “fits” to the sides of the 1,6 meter, added 3 decks, 5 platforms and 5 waterproof bulkheads.

Order # 704 was launched on July 1 1969. The completion of the construction afloat began. The most complex engineering task was the installation of two antennas: the first was a command-measuring system, the second carried out satellite communications. The weight of each of them reached 175 tons. The diameter of the mirrors was 12 meters. A small antenna of the command-measuring complex with a mirror diameter of 2,1 m was to be mounted on the nose superstructure.

The incoming data had to be processed by its own computing complex, which included two computers. With great precautions, these products were delivered to Nikolaev from the Izhora plant. Antennas needed not only to be installed, but also properly configured. It was necessary to check the alignment of two 12-meter antennas and the synchronism of their work.

For these purposes, a special engineering operation was carried out. It was necessary to fix the floating ship motionless. There was no dry dock at ChSZ, so a group of specialists at the enterprise came up with a way to accomplish this difficult task under the existing conditions. “Sergey Korolev” was installed on seven underwater supports pre-erected at the bottom of the Southern Bug. Three were unregulated - two in the bow, one in the stern, and the height of the four pillars (in the area of ​​the mid-section insert) could be changed with the help of jacks. In order to reliably fit the Korolev on the supports and create the necessary downforce, 2000 tons of water were taken as ballast. For the entire time the ship was in that position, a 24-hour watch was organized called the “survivability group”. Its task was to produce, if necessary, balancing the vessel depending on the water level in the water area, the strength and direction of the wind, and the consumption of cargo. In total, the ship stayed on the supports for 26 days, which made it possible to carefully adjust the appropriate thin equipment. 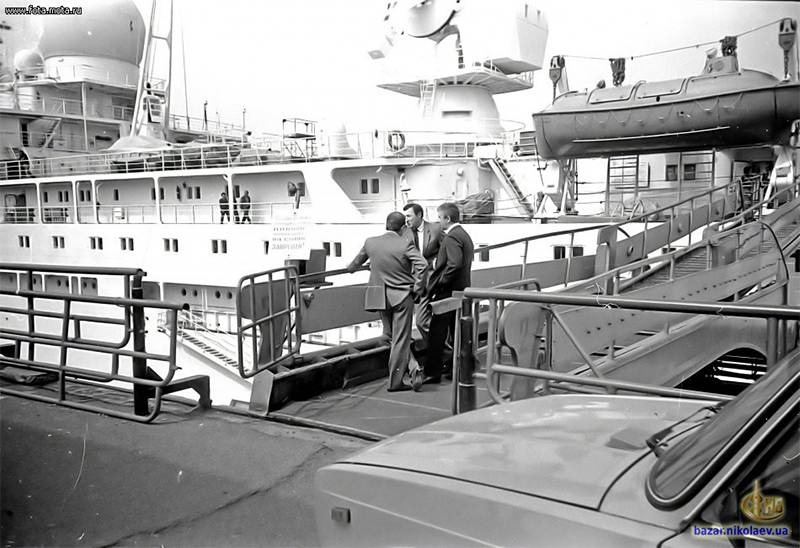 "Academician Sergey Korolev" at the pier

26 December 1970 was signed the acceptance certificate. The signing was attended by famous throughout the country and famous in narrow circles of personality. Among the first are cosmonauts, Heroes of the Soviet Union Valery Bykovsky and Alexander Volkov. Secondly, Major General Yakov Tregub, Deputy General Designer of the missile firm of Nikolay Chelomey. Present at the event and the widow of Sergei Pavlovich Nina Korolev. The reception commission highly appreciated the work of the Nikolaev shipbuilders.

The construction of the “Academician Sergei Korolev” lasted two years, nine months and 8 days. With a total displacement of the ship in 21250 tons, its greatest length was 189,9 m, width - 25 m, height of the freeboard 13,2 m, draft 7,93 m. Main power unit 12 thous. Hp allowed to reach speeds in 17,5 nodes. Range 22500 miles Autonomy - 120 days with crew members 123 and about 200 researchers. Normal operation of the command-measuring complexes was possible at sea state up to 7 points and wind speeds up to 20 m per second.

For people on board, comfortable conditions have been created. In the bow of the ship below the waterline was equipped cinema 250 people. There was a well-equipped gym, indoor and outdoor pools, a reading room and a large library. There was even a billiard room.

In service in the ocean

Already in spring, the brainchild of the Black Sea Plant set sail for the fulfillment of its main task: while in the North Atlantic, Korolev managed the Salyut station. His first flight lasted 205 days, and further operation was intense.

In 1974, along with another ship of the Soviet space fleet "Cosmonaut Yuri Gagarin", "Akademik Sergey Korolev" took direct part in the implementation of the joint Soviet-American space program "Soyuz-Apollon". He provided docking for the Soyuz-19 and Apollo-18 ships while in the Gulf of Honduras in the Caribbean. 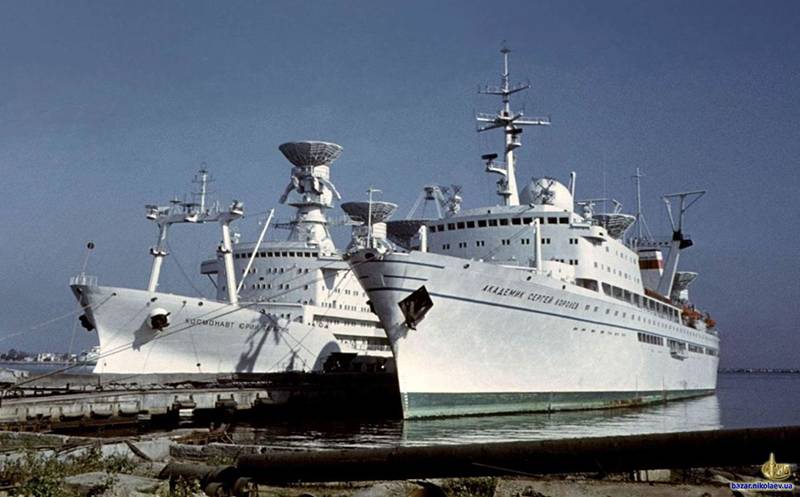 In May 1982, the ship made its thirteenth expeditionary flight. 27 May 1983. Progress-13 transport spacecraft was launched, which was supposed to deliver about 7 tons of various cargoes to the Salyut-2,5 station. Due to the mistakes of specialists of the ground command-measuring complex, who did not have time to issue the necessary commands, Progress began to lose height with an unlucky number. There was a threat of combustion in the atmosphere. The last chance to avoid an accident was the command line of the Akademik Sergey Korolev located in the Atlantic at that time. The members of the expedition succeeded, having issued a series of radio commands, to bring the transport ship into the calculated orbit. Thus, not only was the loss of a spacecraft with valuable cargo prevented, but another international expedition to the Salyut-7 station was not disrupted.

In July, 1988, along with other space fleet research vessels, the Kegostrov and Cosmonaut George Dobrovolsky, Akademik Sergey Korolev, controlled the launch of the booster stages of the launch vehicles Phobos-1 and Phobos- 2 », departing to explore Mars and its satellites.

By 1991, Akademik Sergey Korolev has already made an 22 expedition voyage. During this time he went through three upgrades of the equipment installed on board. Being assigned to the port of Odessa, after the declaration of "independence" by Ukraine, changed the flag. Together with the "Korolev" new authorities got another unique ship - "Yuri Gagarin" - a displacement of 45 thousand tons, built in Leningrad. 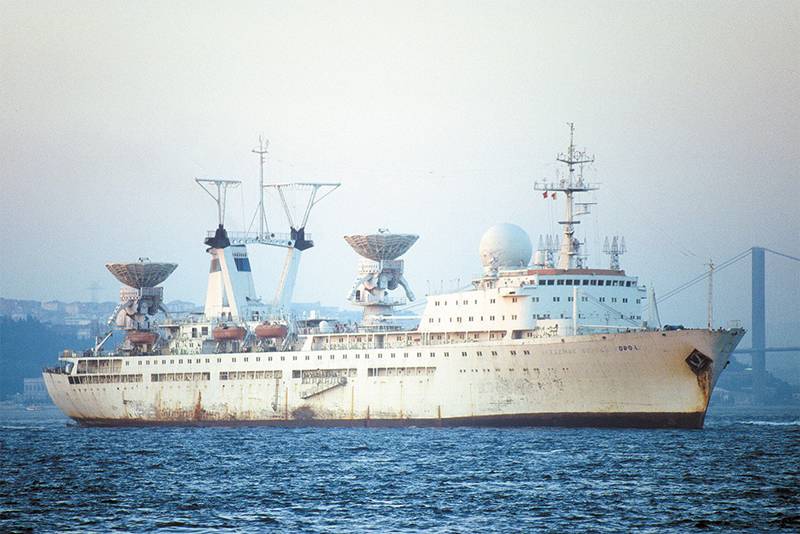 Last hike. "Academician Sergei Korolev" in the Bosphorus goes on cutting in India

Despite the most powerful shaking of the air by pompous statements that Ukraine is a space power, money for the somewhat appropriate exploitation of two unique ships that could be built in the world by countries, whose number could be counted on the fingers of one hand, it turned out. Since 1991, Korolev and Gagarin have been sludge, and in 1995, by decision of the State Property Fund of Ukraine, a tender was announced for the sale of these two ships. In 1996, they were sold for scrap to India, and in winter 1996 – 1997. disposed of.

Author:
Denis Brig
Articles from this series:
CSY: years of occupation and recovery after the war
CSY: submarines, cruisers, battleships and icebreakers
CSY: destroyers leaders and submarines
CSY: recovery after the Civil War
CSY: the first years of Soviet power
CSY: development and decline at the beginning of the 20th century
CSY: foundation and first ships

Ctrl Enter
Noticed oshЫbku Highlight text and press. Ctrl + Enter
We are
Black Sea Shipyard: years of occupation and recovery after the war"Svetlana". History of creation
14 comments
Information
Dear reader, to leave comments on the publication, you must to register.