The bloody end of the battle of Paschendale 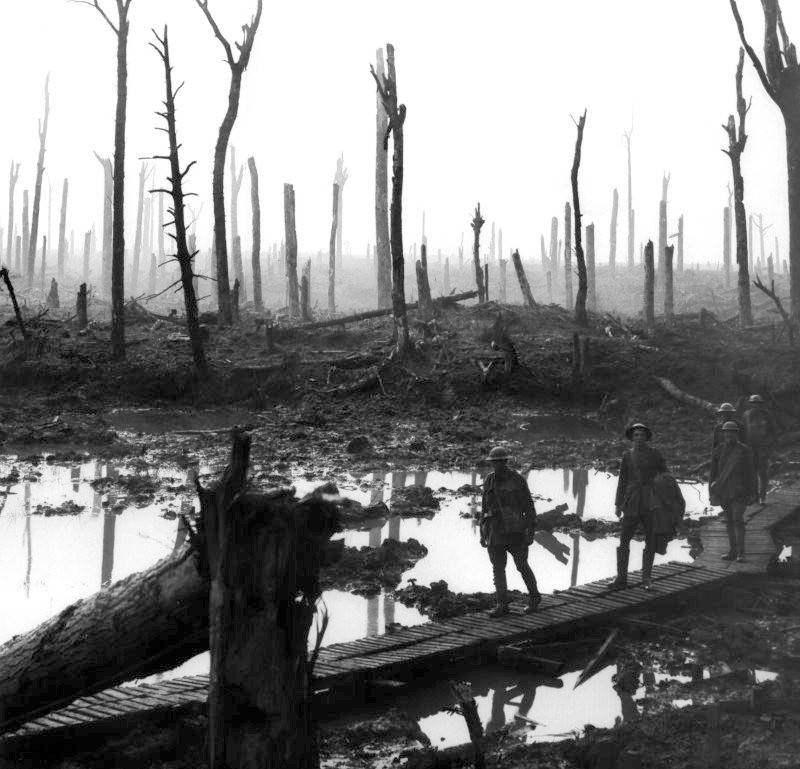 German troops with difficulty restrained the superior forces of the English army in the battle of Ypres. But the main role was played by the marshes: the Allies literally "drowned" in the mud, and moving several kilometers, paid by the sea of ​​soldiers' blood and suffering, was considered a success.

The whole of August, British troops continued stubborn attacks on German positions in the area of ​​the city of Ypres. 15 August, the Canadian corps launched an assault on the so-called 70 altitude between the French cities of Lens and Lille. As a result of stubborn battles, the Allies managed to take it, but they could not go any further. During the week thereafter, the sides exchanged counter-attacks, in which chemical warfare agents were actively used, including the newest German development, the Yellow Cross (mustard gas). Only 17 August German troops used up to 20 thousand shells with this poisonous substance.

On August 16, the British launched an offensive on another sector of the front - in the direction of the town of Langemark north of Ypres. The offensive took place in extremely difficult conditions. Due to active shelling, the drainage canals were destroyed, and the water filled the large marshy lowlands. In addition, there were constant torrential rains. All this turned the battlefield into an impassable quagmire, which also began to present for those loaded with equipment and weapons soldier great danger and greatly slowed the troops. Nevertheless, in the evening the British managed to occupy Langemark and the northern section of the Ypres-State railway, which ran through the third line of defense of the Germans.

Due to torrential rains and terrain drowned in water and mud, the British failed to use Tanks и Aviation, and the severity of the breakthrough of German positions fell on the infantry. As a result, in just two days of fighting, the British army lost more than 30 thousand people on this site killed, wounded and missing. The losses of the Germans were less, but they also had a hard time. General Erich von Ludendorff noted: “... a new big blow fell on us. ... Only with the exertion of all forces we managed to push them to the shortest distance. "

22 August the British and Canadians launched a new offensive in the direction of the city of Menin on the border of Belgium and France (in 8 km east of Ypres). Although the Allies managed to capture three lines of German trenches, they could not take the city itself. In this case, the allies and the Germans suffered heavy losses. A new assault was scheduled for August 25, but it had to be postponed due to heavy rains that turned the lowlands of Flanders into an impassable swamp.

At the same time, the French 20 August again attacked near Verdun. The strike was preceded by a powerful 9-day artillery preparation, during which more than 3 million shells were fired at the German positions. Soon after its commencement, the German command, to avoid major losses, took some of the troops back to prepare for repelling the strike. The French succeeded on the first day of the advance to advance 2 kilometers. 26 August French troops pushed the Germans back on 10 - 15 km north of the city. As a result, the French army returned to the position it held until the start of the German offensive near Verdun in February 1916. Success was achieved at the cost of the most powerful work of artillery: in the course of this offensive, the French set a new record for the consumption of shells - spent 4 million shells or 6 tons of explosives per meter front line. For comparison, for all the fighting at Verdun in 1916, one meter of front line was spent only on a ton of explosives. “This showed how much the Entente’s wealth in artillery and ammunition increased during the year,” noted military historian Andrei Zayonchkovsky. 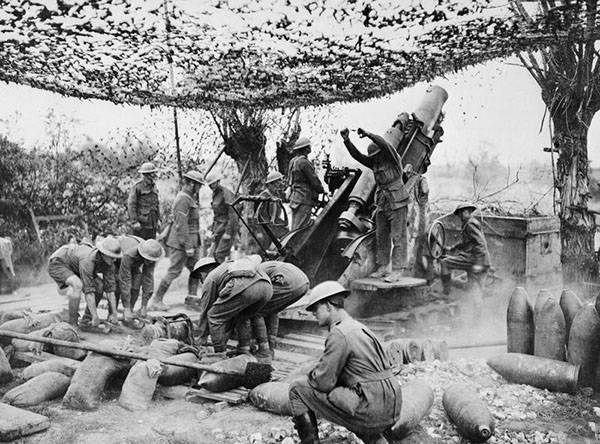 55-i Australian Battery during Pashendale Battle

After the 5-I British army did not achieve significant success in the area of ​​the breakthrough, the commander of the British expeditionary forces, General Haig decided to shift the direction of the main attack. The British command decided to strike in the south-east, along the southern half of the Pashendale ridge. The main role in the new offensive fell on the 2 th British army, under the command of General Herbert Plumer. The British were going to deliver a powerful blow to the enemy’s defenses with a view to breaking through the front. There was a pause in the battle, while the British were preparing for a new decisive offensive. For the new offensive, the British command concentrated on the breakthrough area near the 1300 guns.

During this period, there was a struggle in the air. So, September 11 in an air battle in the Ypres area killed 22-year-old Georges Guinemer - one of the most successful French aces. On his account at that time was 53 downed German aircraft. Ginemere's death was perceived in France as a national grief. 17 September was the first raid on England by Germanic new-type heavy bombers capable of carrying 1000-kilogram bombs - the most powerful at that time.

After a powerful artillery preparation 20 September English, Canadian and Australian launched a new offensive. The main blow was struck in the area of ​​the city of Menen, by whose name this battle entered into history as the "Battle of the Mena Road." Thanks to a strong artillery strike and the suddenness of the attack, the Allies managed to take enemy trenches in a section wider than 10 km and advance on 1,5-2 km, taking control of almost all the dominant heights. The Menna battle again demonstrated the importance of artillery in positional warfare. True, the British paid dearly for this small success, having lost thousands of people killed and wounded in just a week of 21 battles.

September 25 Allied forces resumed the offensive. The main blow this time was in the area of ​​the so-called. Polygonal grove - a small forest between Ypres and the town of Zonnebeke. After the battle of the Mena road, the German command increased the number of troops on the defensive lines. However, the increase in the number of troops on the front line led to an increase in the number of casualties during the Allied artillery preparations. By October 3, the Allies completed the task - the Germans were pushed aside from the Polygonal Grove. However, this victory also cost the British army heavy losses - about 30 thousand killed, wounded and captured. 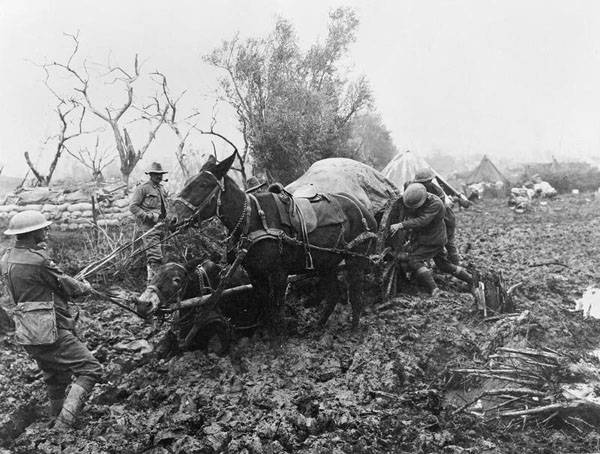 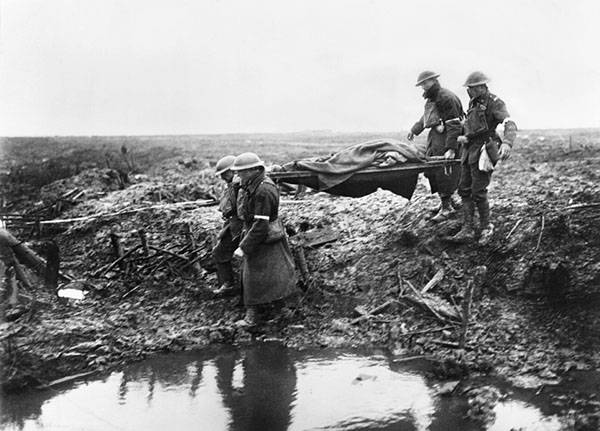 Medics carry out the wounded from the battlefield

October 4 allied units began another offensive. With a new target, the command determined a small elevation to the east of the village of Pashendale. The path to it ran through the tiny village of Brudzaynde. The terrain was still swamped, but the British managed to find relatively dry trails along which they moved the artillery forward. Their fire successfully suppressed the Germans' concreted machine-gun points, after which the tanks went into battle. The British managed to move forward again a few kilometers. Moreover, in contrast to previous attacks, with the least losses, and scattered counterattacks of the German troops were repulsed by artillery fire. Military historians later called the battle for Brudzinde the most successful episode of the Battle of Paschendale. And the Germans recognized 4 of October as a “black day”.

October 9 The English army stormed the German fortifications in the area of ​​the town Polkapelle in 4 km north of Ypres. They did not manage to move forward. The weather was again against the British - incessant downpours turned the battlefield into a solid sea of ​​mud. German troops also had a hard time, they defended their positions at the cost of heavy losses - 35 thousand killed, wounded and captured. On October 12, the Allies attacked the village of Pashendale. However, this attack also failed. British and Australian units lost about 13 thousand people killed and wounded. Among them were 2735 of New Zealanders, some of them died a terrible death, simply drowning in the quagmire of soaking from the endless rains and shelling of the fields. In New Zealand, 12 October is still considered one of the blackest days in the history of the country. October 13 British Commander-in-Chief Douglas Haig decided to suspend the operation until a dramatic improvement in the weather.

October 26 Allied troops resumed the offensive and again went on the assault Pashendale. The main role was assigned to Canadian units, which on the flanks were supported by the British and French. However, it was not possible to break through the enemy defenses, and because of the incessant rains and heavy losses, the operation was again postponed. Only November 4 British and Canadian troops occupied the outskirts of the village Pashendale. On November 6, the Allies conducted a final attack on the village. They managed to occupy the remaining ruins. 10 November, Canadians repulsed the Germans and the prevailing heights north of the village. At this battle was completed. 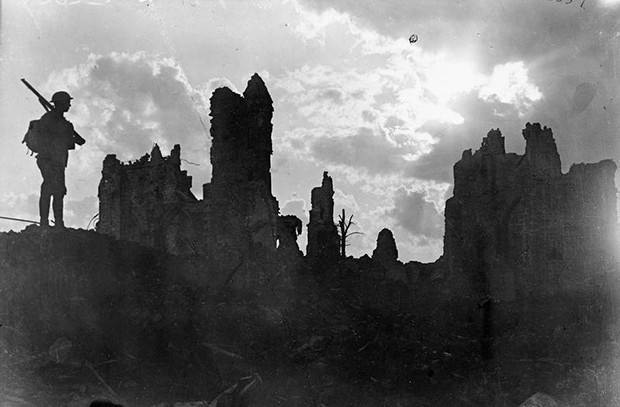 British soldier on the ruins of the village Paschendale

Thus, the offensive operation of the English army, which lasted from July, and went down in history as the Battle of Paschendale, was completed. Formally, the British troops won, taking a number of positions. However, the allies did not succeed in achieving the strategic goal of breaking through the enemy front and seizing the coasts of Belgium in order to deprive German submarines of naval bases.

The battle of Pashendale became one of the bloodiest battles of the First World War - the allies for 4 month lost more than 500 thousand people killed, wounded and captured, the Germans - about 350 thousand people. The loss figures are still controversial. This battle then became one of the symbols of war and suffering. During the battle, it rained all the time, turning the low-lying area during constant shelling into an impassable quagmire, in which many soldiers died. In this case, the Allies have advanced only a few kilometers. However, many researchers emphasized the important role of the battle, as it forced the Allied command to be more attentive during the preparation of offensive operations, to improve the assault tactics. 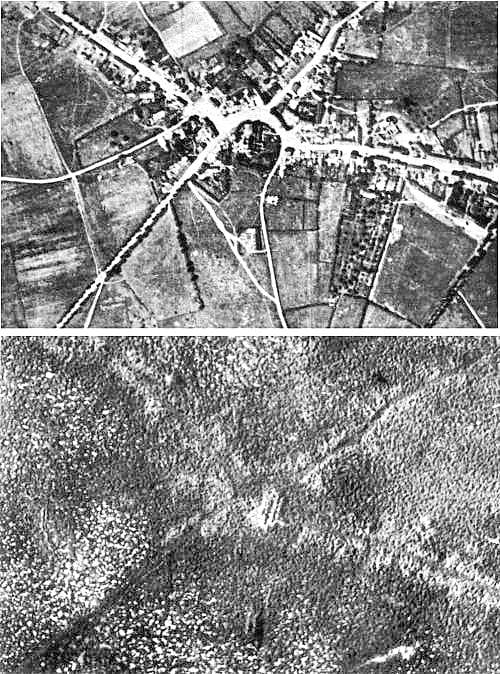 The transition of the Central Powers to a strategic defense
Entente plans for 1917 year: bet on a decisive victory in the war
Russian army to the beginning of the 1917 campaign of the year: the approach of the general collapse
Attack without shot: Mitav operation
How Germany began the unlimited submarine war
German submarine vs UK
How the German submarine fleet tried to crush the "mistress of the seas"
The United States used the myth of "inhuman" submarine warfare to oppose Germany
Caucasian front in 1917 year. Baratov corps offensive in southwestern Persia
Mosul operation. How the British, until recently, tried to use the Russian "cannon fodder"
The war of the USA and England against Europe and Russia for absolute power on the planet
USA and World War I
How did the USA profit from World War I
"War will end wars." USA in the First World War
World War I turned the United States into a leading world power
"Nivel Meat Grinder"
Tenth Battle of the Isonzo
The failure of the "offensive of Kerensky"
"It was no longer the former Russian"
As Greece at gunpoint forced to go to war
The revival of the Romanian army: the battle of Marashti and Maraseshti
Operation "Albion"
How the Germans stormed the Moonsund Islands
The bloody battle on the plateau Bainzitz
The defeat of the Italian army in the Battle of Caporetto
The defeat of the Italian army in the Battle of Caporetto. H. 2
"To die, but not to retreat!"
As the British offensive under Yprom drowned in mud

Ctrl Enter
Noticed oshЫbku Highlight text and press. Ctrl + Enter
We are
Reports from the militia of New Russia for 2 September 2014 of the yearLosses of the Ukrainian Air Force: on the verge of disaster
Military Reviewin Yandex News
Military Reviewin Google News
6 comments
Information
Dear reader, to leave comments on the publication, you must to register.