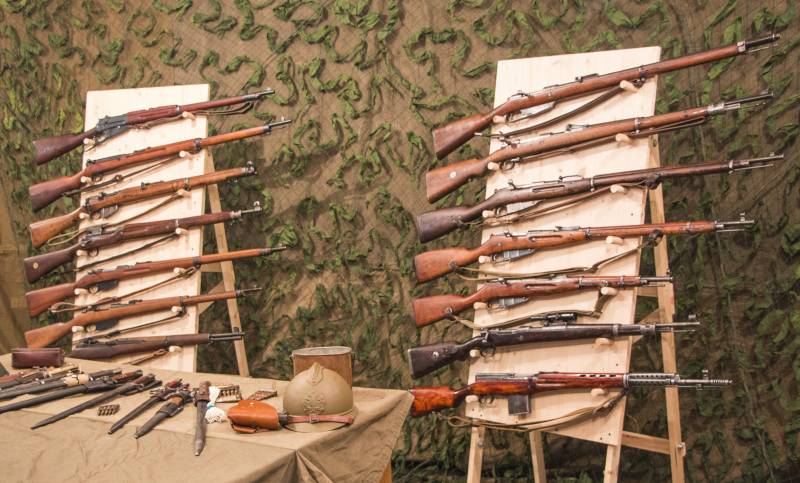 As promised, we continue the series "Tales of weapons". In the near future, with the help of the head of the military-historical club Infanteria, we will acquaint viewers and readers with samples of weapons that took part in World War I on both sides of the front.

The list is quite extensive and interesting. Moreover, thanks to Andrew, we will be able to compare these rifles later.

We begin, of course, in all fairness, with the Russian three-line rifle of the 1891 model of the year, or the Mosin rifle. 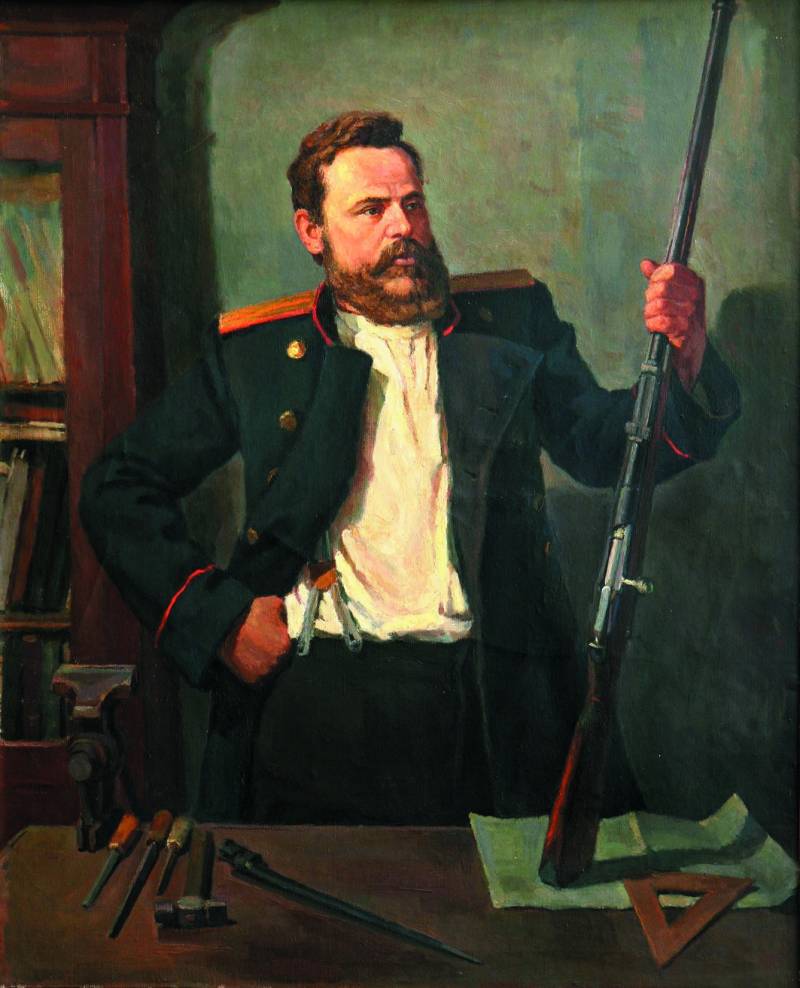 A person who has lived a short life and who has given up a large part of this life to the strength and power of Russian weapons. The rifle was significantly ahead of the life of its creator. Even today, the special forces are using the “Mosinka” as a sniper weapon.

Немного stories before moving on to the rifle itself. 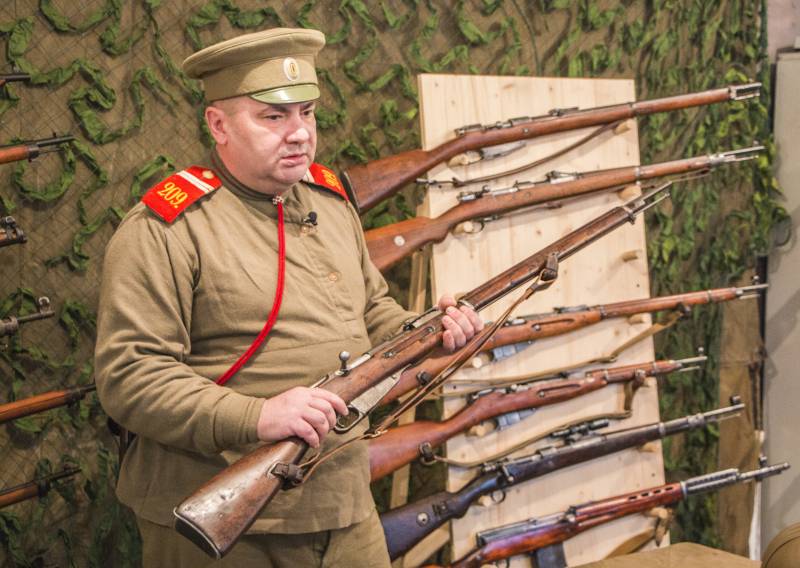 The first developments were carried out under the 4,2-linear cartridge for the Berdan rifle, equipped with black powder. The Russian military department frantically searched for new weapons for the army. From 1885 to 1889, about 150 Russian and foreign systems were considered, including the 4,2-Linear rifle of Captain S. I. Mosin's system developed by 1887 of the year with a rack-and-pin ammunition magazine.

The rifle showed good results, but was rejected due to the already mentioned lack of a common for all systems with such stores - the loading time and the difficulty of reloading the store in combat conditions.

The American system was good for blunt bullets only. Pointed bullets, and even with the central battle, could have caused the capsule and shot in the store during the submission of the cartridge. 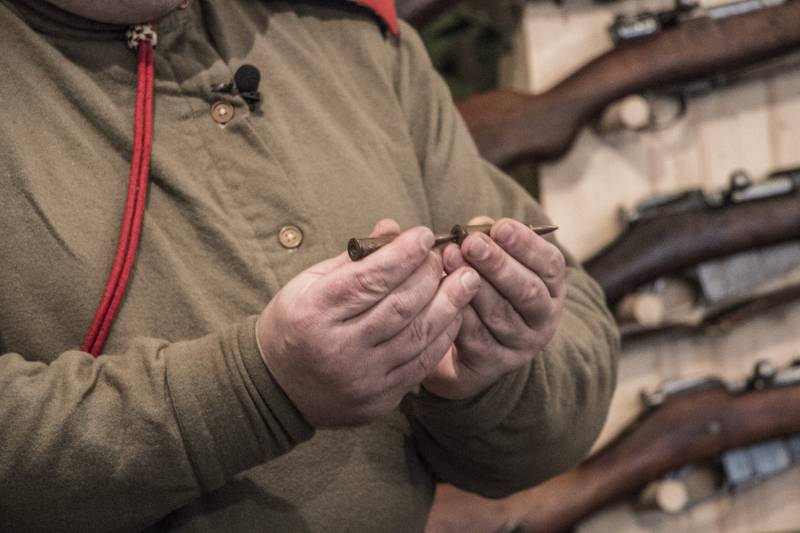 In 1889, Sergei Ivanovich Mosin proposed a three-line (7,62 mm) rifle, developed on the basis of his earlier single-shot, from which the gate group and receiver were borrowed almost unchanged.

Some ideas of the store's design were borrowed from the Austrian-Hungarian rifle of the Mannicher system with burst loading, which was tested in the same year. The single-row shop was recognized by Russian military specialists as fully complying with all requirements for a modern rifle. 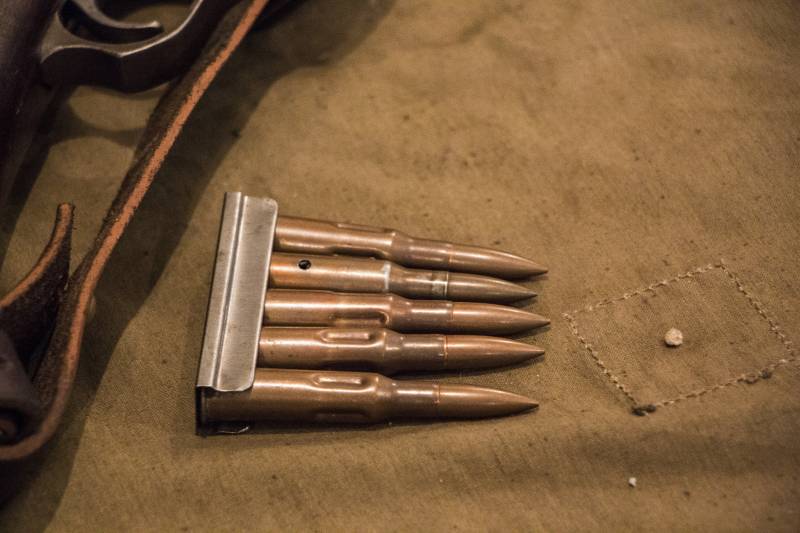 Simultaneously with Mosin, inventor Leo Nagan from Belgium submitted a rifle to the competition. The rifle, however, had by that time lost a number of contests to the Mauser 98, but this did not bother Nagana.

The Mosin rifle was not only not worse, but much better, although Nagan's rifles were notable for their workmanship and assembly. Plus "Mosinka" was pretty cheaper.

So in the 1891 year, at the end of military trials, the Commission developed a compromise solution: a rifle was adopted, developed on the basis of the Mosin design, but with changes and additions, both borrowed from the Nagant design and made taking into account the proposals of the Commission members themselves.

In some sources, the rifle is called: the Mosin-Nagan rifle.

What was taken from Nagan's rifle:

- the idea of ​​placing the feeder on the door of the store and opening it down;
- method of filling the store by lowering the cartridge rounds with a finger;
- grooves for the holder in the receiver;
- the form of the holder for loading;
- fastening the supply spring to the lid of the store;
- the shape of the cut-off reflector.

All other parts were developed by Sergei Mosin or members of the Commission, again, with the participation of Mosin.

The changes borrowed from the Nagant rifle somewhat increased the ease of handling the rifle, but even if they were removed, they did not deprive it of its functionality. For example, if you opt out of the charger loading at all, a magazine can be equipped with one cartridge each. If you disconnect the supply spring from the magazine cover, the cartridges will still be fed, although the risk of losing the spring when cleaning is increased.

Thus, the role of these changes is secondary in relation to the purpose and operation of weapons and does not give grounds to call Nagan the creator of weapons.

Since the rifle had parts proposed by Colonel Rogovtsev, the commission of Lieutenant General Chagin, Captain Mosin and gunsmith Nagan, was suggested to give the weapon the following name: Russian trilinear rifle of the 1891 model of the year.

Emperor Alexander III approved the sample, deleting the word “Russian” from behind the Belgian Nagant, so the rifle was adopted as the “three-line rifle of the 1891 model of the year”. Right? I do not know.

Behind Mosin, they left the rights to separate parts of the rifle designed by him and awarded him the Big Mikhailov Prize for outstanding development in artillery and rifle units.

Last name Mosin appeared in the name of the rifle only in 1924 year, under Soviet rule.

Andrey Bondar will tell about the rifle itself.