November 27 2017
13
Last Sunday, the President of the European Council and the former Prime Minister of Poland, Donald Tusk, on his Twitter page, suspected the ruling Polish party Law and Justice (PiS) about relations with Russia. “An acute dispute with Ukraine, isolation in the European Union, a departure from the rule of law and independence of the court, pressure on the non-state sector and free media - a PiS strategy or a plan of the Kremlin? It looks like, ”Tusk shared his sudden insight. 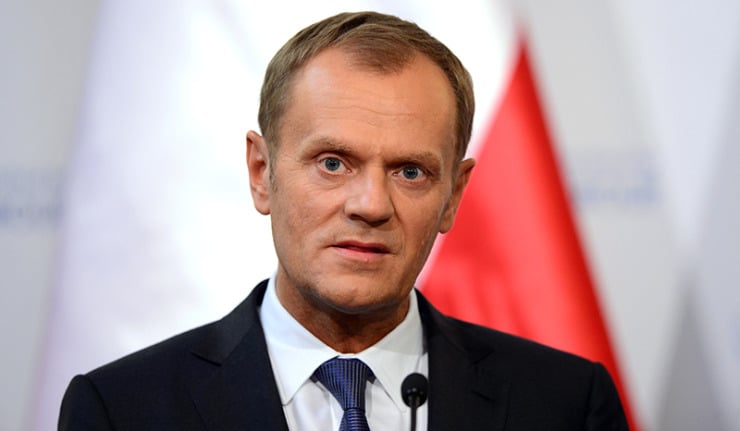 The position of Warsaw has become an irritant to its partners.

Shortly before Donald Tusk’s epiphany, in an interview with Krayina magazine on a similar topic (how the Polish authorities are preparing the society to reset relations with Russia), the notorious director of the Ukrainian Institute of National Memory Vladimir Vyatrovich fantasized It was not very convincing, but Vyatrovich didn’t strive for this.

He is already used to the fact that the Ukrainian media replicate any of his nonsense, not burdened with any evidence. This time, Vyatrovich convinced “Krajina” and its readers that Warsaw “consistently forms a negative image of Ukraine” in order to prepare Poland for rapprochement with Russia.

In order for his unexpected statement to somehow correlate with the principles of formal logic, Vyatrovich gave this explanation. PiS party leader Yaroslav Kaczynski is skeptical of the European Union and is considering withdrawing from it. Today's main ally of Poland - the United States - on the contrary is interested in preserving the EU. It turns out that the Polish authorities need a new strategic ally in their confrontation with Europe. This circumstance tempts Warsaw to "establish a relationship with Russia."

Vyatrovich’s sophistry is easily destroyed by the real facts of the anti-Russian policy of the Polish authorities. (Why are there only acts of state vandalism against monuments to Soviet soldiers who fell during the liberation of Poland or unbridled hysteria against Russia's energy plans?) What is the matter here?

First of all, it should be noted that both of these officials have a personal account with the Polish authorities. Vladimir Vyatrovich, who played the game of Bandera in Ukraine, was recently banned from entering Poland, and Donald Tusk was subjected to the obstruction of Warsaw, which had sharply opposed his re-election as head of the European Council.

The resemblance does not end there. Brussels and Kiev are clearly annoyed by the ambitions of Polish politicians who claim to be regional leaders with a decisive vote in all large-scale projects. Moreover, Warsaw today declares the priority of Polish national values ​​over European and, especially, over Ukrainian ones.

This position can not be liked by the partners in the European Union. They are looking for ways to besiege the obstinate Poles. The accusation of ties with Russia is from this series. A new horror story about the “hand of Moscow”, as we know, was the first to adopt unprincipled American politicians. This example inspired their European colleagues.

Now, all the vicissitudes in elections and referendums in the EU countries, as well as the inconvenient results of voting for the authorities, are taken to be tied to the intervention of Russia. So it was in Catalonia, France, Austria ... Now the turn has reached Poland. In spite of the EU officials, its current leaders (from the right-and-justice party that came to power in 2015 year) openly declare their claims to be the political center of Eastern Europe.

Where will her political ambitions lead Poland?

Words alone, of course, are few. Therefore, the political ambitions of Warsaw are supported by deeds that run counter to the common European attitudes. These include judicial reform, when the Polish courts, despite the active protests of Brussels, directly entered into the structure of the executive branch - the Ministry of Justice.

The second similar action was the subordination of the leaders of the national media to the central government. In addition, Warsaw refused to accept and accommodate refugees, legalize same-sex marriages, and spoke out against important infrastructure projects for Europeans, such as the construction of the Nord Stream-2 gas pipeline. Finally, the Polish government refused to support the candidature of the Pole Donald Tusk in the European capitals for the position of President of the European Council.

After all these demarches, European political analysts started talking about the fact that "the Poles are copying the Russian concept of sovereign democracy." The comparison, I must say, is very controversial. First of all, because, unlike in Poland, Russia is building its sovereignty on an independent, national policy, economic, and national interest.

The Poles are different. Instead of Brussels, they simply reoriented themselves to Washington, counting on its support and patronage. In addition, in all acute and conflict situations, Warsaw always ensures that the door to Europe does not slam before it. After all, it can threaten the rather serious preferences that Poland received when joining the EU.

Therefore, whenever the head of the Polish government Beat Szydlo arranges his regular meeting at the meetings of the leaders of the EU countries, she certainly asks not to link the special position of Warsaw with the financing of Poland from the EU budget, receiving subsidies, subsidies and other means of supporting the Polish economy. This was, in particular, the re-election of Donald Tusk, when Beata Szydlo refused to sign the summit’s final document.

Poland’s fear of losing access to a European wallet puts its “sovereignty” in obvious dependence on EU leaders filling this wallet. For this reason, the Polish authorities have put a bill on repolonization of the local media before the time being covered.

Such a law of the policy of the ruling party "PiS" was proposed immediately after his victory in the elections 2015. They are categorically not satisfied with the fact that the German media concerns almost fully own the regional Polish editions. German business also owns a large proportion of national publications.

The first attempt to limit the influence of the Germans on the Polish media was faced with tough resistance from Berlin. Warsaw retreated, but did not forget about its plans. Now, when Germany is immersed in internal political problems, in Poland they got a bill on the media from the storekeepers, gave it a new name “on decentralization”.

The meaning of this has not changed much. We are still talking about establishing at the legislative level a limit (15%) of foreign ownership in the Polish media. It is very similar to the Russian law on media-foreign agents, which only increased the suspicion of the “experts” about the influence of Russia on Polish affairs.

For the ruling Polish party, this law is extremely important. Next year in Poland local elections will be held, and in a year - in the Sejm. Not everyone in Polish society is ready to vote for PiS without thinking. Under these conditions, control over the media becomes an urgent political task. They will try to solve it “during the time of German powerlessness”, which will certainly lead to a new round of tension between Warsaw and Brussels.

Meanwhile, in the ensuing discussion about the rapprochement of Poland with Russia in Warsaw sounded unthinkable earlier proposals. So, Gazeta Wyborcza columnist Pavel Vronsky expressed the opinion that the warming of Polish-Russian relations is in the interests of the peasants voting for PiS. They will have the opportunity to resume agricultural exports.

Vronsky sees foreign policy reasons in his proposal. He believes that the European Union is not averse to cooperating with Russia. The Warsaw initiative for rapprochement with Moscow could facilitate such cooperation, and at the same time balance the relations between the EU and Poland.

Gazeta Wyborcza is not a pioneer in the topic. Before him, Foreign Minister Witold Vashchikovsky quite clearly expressed this: “Poland is ready to cooperate with Russia, but does not see on its part a willingness to engage in dialogue.” The same Vashchikovskiy, whose diligence closed the road to Poland to all Ukrainian radicals, including the director of the Ukrainian Institute of National Remembrance Vladimir Vyatrovich mentioned here.

The first wind does not make the weather. It is difficult to say whether these unexpected proposals will become a Polish political trend. Moreover, the position of Vashchikovsky caused a frank irritation from the leader of PiS, Jaroslav Kaczynski. Experts even talked about the imminent resignation of the minister. Today, obviously more.

Western politicians have not formulated their promising concept of mutually beneficial cooperation with Russia. It is unlikely that this will help horror stories "about the cunning hand of Moscow", which today is used as a whip to solve small tactical tasks. Under the distribution of one of them came Poland, with its current regime unfriendly to us.

Ctrl Enter
Noticed oshЫbku Highlight text and press. Ctrl + Enter
We are
Tusk: Do Polish authorities fulfill the Kremlin’s plan?And about. The head of the Ministry of Internal Affairs of Ukraine announced the beginning of the military operation in Slavyansk
Military Reviewin Yandex News
Military Reviewin Google News
13 comments
Information
Dear reader, to leave comments on the publication, you must sign in.