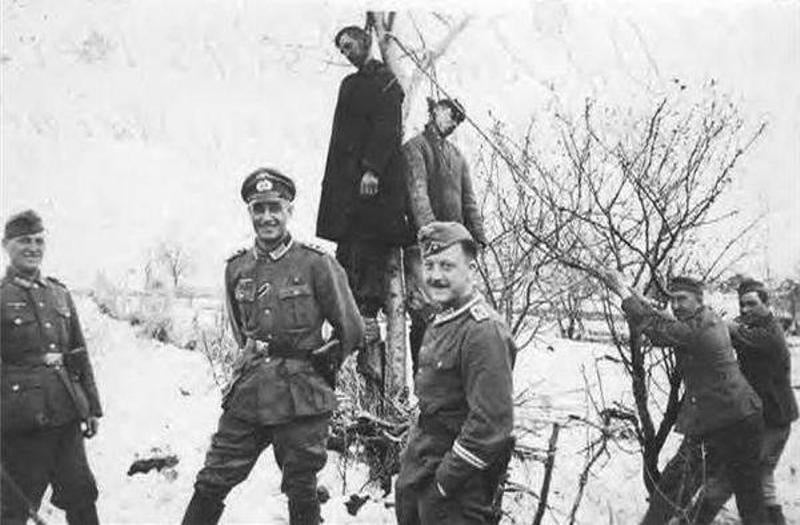 The 17-year-old youth rose to the rostrum of the Bundestag, cleared his throat, and began:

- Ladies and Gentlemen! My name is Nikolai Devyatnichenko, I study at the gymnasium of Novy Urengoy. I was invited to participate in a project dedicated to the soldiers who died during the Second World War. This made me very interested because I have been fond of since childhood. history and his country, and Germany. I was particularly interested in the fate of Hans Rauch, who was killed in the so-called. "Stalingrad boiler" ...

The soldiers lay and waited for the command "to attack." The old fighter looked at the young lad to his right - he had the first fight.
- Do not drift, Fedor, break through. The main thing is not to be afraid and shoot first.
Fedor grabbed a clump of snow and put it in his dry mouth.
- And I'm not afraid.
The whistle sounded. “Ahhhh!” The boy shouted, got up and, clutching his rifle in his hands, rushed with the others to the house on the other side of the square.
Fedor ran across the square. It seemed to him that every bullet flies precisely into him. Fighters fell to his right and left, but he did not see it. Petrovich disappeared somewhere, encouraging him a minute ago.

- I immediately began to look for relevant information. At first I visited the city archive and library, then I tried to find the history of German soldiers on the Internet and other sources. However, later, in cooperation with the People’s Union of Germany for the care of war graves, I learned and studied in detail the life history of Hans Johann Rauch.

Fyodor jumped into the window opening, turned to the right and rushed down the corridor littered with broken bricks. He looked into the first doorway and saw a German. He leaned his chest on the window sill, he frantically twitched the bolt of his carbine and fired at the fleeing Soviet soldiers. As if sensing something, the German looked back and his face twisted in a grimace of horror: he saw his death.
Fyodor raised his rifle and pressed the trigger.

- Hans Rauch was born in a large peasant family. Since childhood I have known hard work, I loved my brothers and sisters. He loved life and did not want to fight. He did not voluntarily find himself in Stalingrad. I sincerely grieve for the death of this young man and would like the bullet that cut off his life to fly past.

And these words, clothed with energy shells, flew into the past. Punching year after year, decade after decade, they flew, flew ... That is the turn of the millennia. Swept past 90-e, 70-e, 50-ies of the XX century ... A wad of energy decreased in size and until January 1943, quite a small fire ball flew by. But his energy was quite enough to hit his lead ball to change his flight.

The bullet hit the brick wall. The Russian screamed and rushed at Hans with a rifle. Rauch put forward a carbine and fired.
For a few seconds he looked at the Russian lying at his feet, and then jumped into the window opening.

After landing, he ran along the wall and came across two Russians. Both raised their rifles.
Hans dropped the carbine and raised his hands.
- Niht Schissen! Hitler kaput!
“Of course, kaput,” one of the fighters said angrily, yet without lowering his rifle.
The second approached Hans and patted his pockets. Finding nothing, he pushed the captive in the back:
- Stamp, Fritz, and rejoice: the war has ended for you.

Fyodor was lying on his back, looking at the gray ceiling and felt how life was flowing out of it along with blood.
“Pretty, pretty, be patient,” the nurse whispered, unbuttoning his quilted jacket — I'll do everything now.
- Do not ... - Fedor whispered, - it’s in vain ...
“Well, now, I'll tie you up, then we will deliver to the hospital, they will quickly treat you,” the girl said in a patter.
- Sister, - Fedor whispered, - do not ... Better to kiss me ... The girl has never kissed me ...
The nurse carefully removed her helmet, leaned over, and her lips touched his lips.
The little snowflake, whirling, fell on the cheek of the soldier and did not melt.

- In the so-called "Stalingrad boiler" German soldiers experienced terrible hardships, freezing, starving. Many of them died. These were the innocent victims of the war, and we have no right to forget about them. They are also worthy of memory.
The Bundestag deputies, one after another, stood up from their seats and unanimously stood and applauded the Russian youth.

A small energy ball, which changed the flight of a bullet, flew back. Fedor did not reach Vienna and did not return home with two orders and two stripes for injuries. Lost in the new future Zoyka laughter - his daughter. A funny peasant Vovka was not born, Vovka did not grow up into a beautiful Volodka, Vladimir Nikolayevich did not start a family and his son Nikolay was not born.

Proud of his mission, Nikolai smiled. But suddenly the smile on the face of the young Russian man was replaced by a grimace of pain - a bullet fired at 1943 by the good Hans Rauch hit him in the chest.

Gasping for breath, Nikolai leaned on the podium and looked with horror at his increasingly transparent hands. Already through them sheets with his printed speech are visible, now his hands have turned into barely visible contours. This left into oblivion the unborn great-grandson of a Russian soldier killed in Stalingrad.

And the Bundestag deputies all continued to clap their hands, and applauded the longest from the rostrum for honored guests Hans Rauch, a veteran and innocent victim of the Second World War, which the Soviet bullet passed in January 1943.

Ctrl Enter
Noticed oshЫbku Highlight text and press. Ctrl + Enter
We are
What you didn't want to know about EnglandTales of Chapai ... or how history is ridiculed
Military Reviewin Yandex News
Military Reviewin Google News
137 comments
Information
Dear reader, to leave comments on the publication, you must to register.