Stormtrooper IL-2: the epic of a single monument. Part of 2

November 28 2017
13
Before becoming a monument, the Il-2 attack aircraft rested beneath the Black Sea, keeping the secrets of its crew. And before you go to the bottom of the sea, the plane and its crew fought as part of the 2nd squadron of the 8th guards aviation regiment of the Black Sea Air Force fleet. But let's start with the most completely random find of a winged car.


It is considered that IL-2 was accidentally discovered in the summer of 1974 by students of the Voroshilovgrad machine-building institute near Novorossiysk in the area of ​​Dry Gap. Now it is a picturesque tract with beaches, recreation centers and the purest mountain air of pine and juniper forests. During the war, until the fall of 1943, the Nazis controlled this territory. 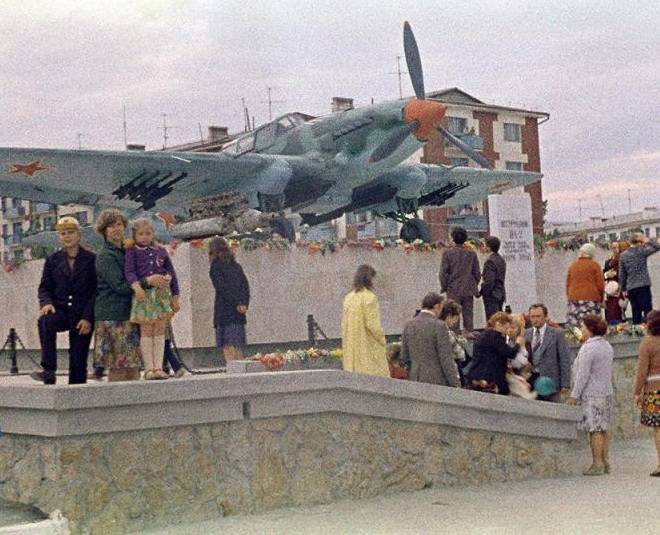 However, it would be somewhat incorrect to assume that the first shot down aircraft was found in the 1974 year. The fact is that the Black Sea is rich in such finds - from minesweepers and sea hunters to the Messerschmitt and even the Lend-Lease A-20 Boston. In 2006, for example, the Yak-1B fighter was found in the Broad Beam area, apparently guided by the stories of local residents. And now, however, less than before - thanks to modern popular culture, in the community of local children and young people, one can hear about a multitude of underwater finds, about which there are no messages at all or in the press, or they are little known. Why are there to go far. The author himself once after the next bathing forced his beloved dad to almost turn gray by pulling a mortar mine from the depth with a “live” shank. This was the first brightest and shortest safety instruction in my life, which consisted in the promise to “personally tear my hands off if they were not torn off by another find”.

Therefore, most likely, the students already knew the location of the aircraft. According to the memoirs of one of the members of the Novorossiysk group of ASPTR (emergency rescue underwater technical works) Viktor Semenyakin, the students explored the seabed area at the Dry Gap as early as 1973 when they came across a massive metal hull of the aircraft.

Later, the students were able to penetrate the cabin, from which they reached the surface of the tibia, the TT pistol, a piece of tablet and so on. Soon it was possible to establish a squadron and a regiment to which the machine and its crew were assigned. The IL-2 served in the 2 th squadron of the 8 th Guards assault air regiment of the 11 th assault aviation division of the Black Sea Fleet Air Force. The crew commander was Guards Major Kuznetsov, Viktor Fyodorovich, and the air gunner, the senior Navy Reshetinsky, Alexander Vasilyevich. About them later. 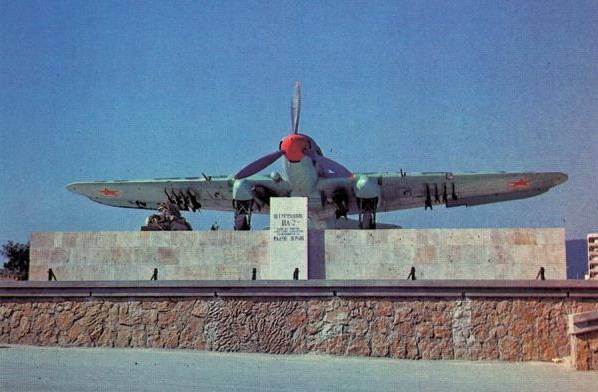 Above the find, students put up a buoy. Gubin in the area was 17-18 meters. The discovery became known in the city party committee. The party comrades decided to raise the plane, and the head of the ascent was headed by the secretary of the city committee, Vladimir Klepikov. A colleague of Viktor Semenyakin, Yevgeny Laukhin, recalled how he was called from the city committee and asked to raise the plane, while insisting that all work be completed within a month, in order to make a gift to the hero city by the September holidays (Novorossiysk Day). Laukhin, to put it mildly, was confused. In the city committee poorly imagined the situation. Eugene at that time did not know the state of the aircraft, or the exact area of ​​its location. He could not guarantee that the machine would not fall apart even while lifting. And in general, is there any sense in raising the aircraft itself (raising the remains of the crew was not questioned in principle), except for the struggle for the purity of water resources.

To answer these questions, a detachment of the ASPTR team headed for Sukhoi Slit. The displacer was not in place. Contacting the students, they finally found out where the plane is. The body of the IL-2, resting at depth, was made out right away. He rested on a sandy bottom among algae-covered stone ridges. And immediately found the first problem. Half of the bombs ammunition was not consumed, i.e. It is logical to assume that the plane was shot down directly during the "attack" ground targets. By the way, during the diving work "next door" with our attack aircraft at a depth of about 40 meters found the German "Messerschmitt."

Having no experience in the neutralization of the Great Patriotic War air bombs, the ASPTR squad gave a request for a sapper diver. 8 August 1974, the Nakhimovets and Diver-24 vessels reached the attack ground. Already on the spot it turned out that the sappers attached to the squad were not divers from the word at all. Those. the bombs had to be delivered first to the deck. It took volunteers. Georgy Yanovsky and Viktor Semenyakin, already known to us, undertook to lift the dangerous cargo. After a brief briefing from land engineers, having decided that God would not give out - the pig would not eat, the divers went to the depths.

Like their own children, volunteers raised bombs to the surface. Already on the deck they were covered with a tarpaulin and constantly poured with water. And in the yard, by the way, there was an unbearable August heat. After work, the sappers began to get the plane itself. 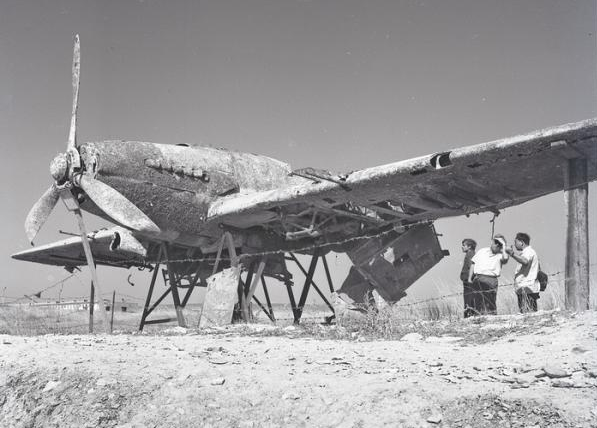 Immediately after the ascent, the attack aircraft tail was stored separately.

As luck would have it, when attack aircraft wings appeared from under the water, suddenly the cables could not stand. There were no injuries. But divers had to reassemble a combat vehicle. She was raised from the second time, and instantly two problems arose at once. First, the wooden tail of the car had to be separated from the body, since he was badly damaged. Behind him, the divers were forced to descend separately. Secondly, and most importantly, a detailed examination of the attack aircraft showed that some of the bombs were missing, but were not spent on the target. It means that she lurked somewhere at the bottom, spilling sleep when the car crashed into the ground.

The military commissar, who monitored the situation, gave the order to inspect the entire bottom around the site of the fall and lift the explosive cargo. Not having time to realize all the "joy" of the neighborhood with these deadly toys, the divers spat again, knocked on a tree and went into the water. Work went smoothly and this time. As a result, the coastal line was cordoned off, all the bombs were lowered to the bottom at a decent distance from the ships and undermined.

The motor ship "Nakhimovets" with the aircraft fixed to the board headed for Novorossiysk. Yevgeny Laukhin recalled that as soon as the plane was taken out of the sea water, its body literally oxidized in just minutes after 20 and completely changed its original color. Once the plane was loaded onto the dock on the trailer, he was taken in the open air museum "Weapon and military equipment of the Great Patriotic War ". Those. a monument to IL-2 was not immediately. 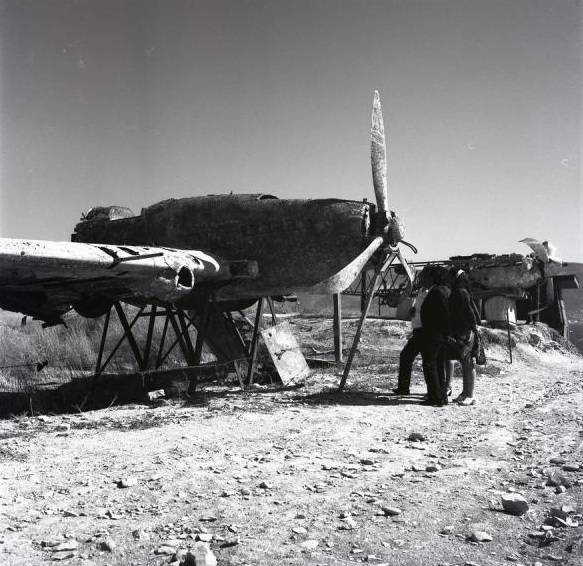 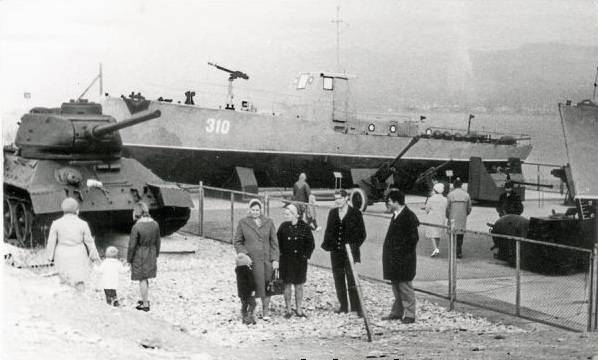 Soon the authorities realized that the plane was being destroyed and soon there would be nothing left of the hull. It was decided to carry out restoration work by ship repairmen. Moreover, initially it was assumed that the aircraft would be stored under a plexiglas cap to protect against the negative effects of climate. However, by September 1978, when the work was completed in time for the 35 anniversary of the liberation of Novorossiysk, local authorities decided not to return the aircraft to the exhibition, but to place it as a monument on a pedestal at the intersection of Heroes Paratroopers street and Lenin Avenue. 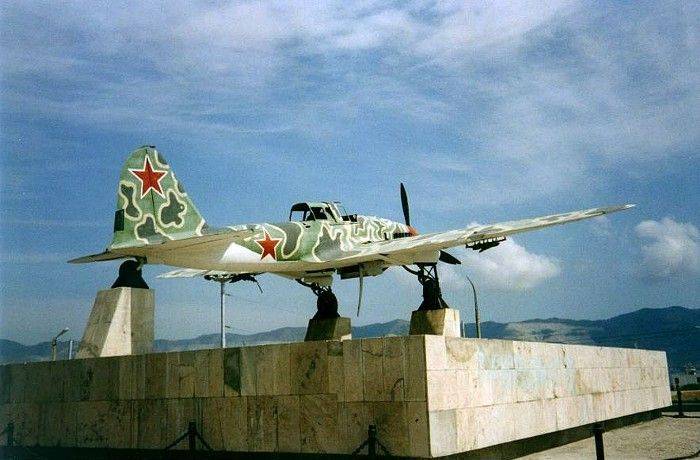 29 March 1980 of the year on a massive pedestal was installed restored IL-2, but somehow forgot about the protective cap. The pedestal itself and the entire architectural composition was created by the efforts of Gurgen Najarian, then the chief architect of the city.

Let us return to the crew of the dead and new life of the IL-2. In the distant 1943, in April, the Nazis fell upon Malaya Zemlya with all their might - the Nazi operation "Neptune" was in full swing. The Nazis were in a hurry to make a gift to their Fuhrer on his birthday (April 20), dropping the paratroopers into the sea. Troops from the "mainland" provided the bridgehead with all possible support, including aviation.

The 8 Guards Ground Attack Aviation Regiment, in which Il-2 fought, was then based at the airfield in Gelendzhik. “Shturmovki” came one after another to help the landing force in a critical situation. On April 19, the crew of Major Viktor Kuznetsov left for his next flight. He and his air gunner, Alexander Reshetinsky, were assigned the task of storming the enemy troops north-east of the village Fedotovka, near Novorossiysk. After the start of the attack, German fighters attacked the IL-2. The car did not return to the base.

Victor F. Kuznetsov was born in 1912, in Pokrovskaya Sloboda (with 1931, the city of Engels) in the Saratov region. I volunteered for the army, leaving my mother Olga Alexandrovna Kuznetsova, my wife Olga Mikhailovna and son Alexander at home. By the terrible days of April 1943, Victor was already a knight of the Order of the Red Star and deputy commander of the 2 AE of the 8 th assault air regiment. Before the battles for Novorossiysk, Victor fought in the skies over Sevastopol and Kerch.

His air gunner was a native of Chernihiv region, Olishevsky district, the village of Olshevka Reshetinsky Alexander. Alexander barely exceeded 20 years, since the war, his mother waited only Darya Nikolaevna. 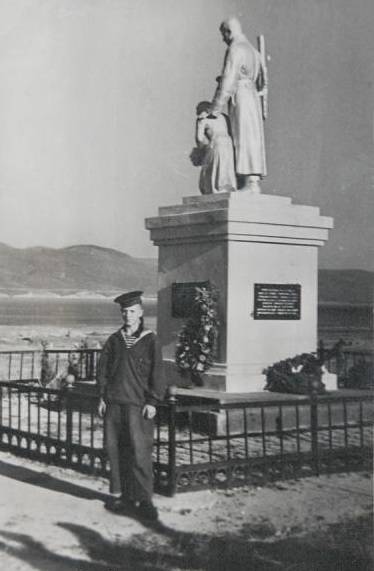 The remains of the IL-2 crew found at the bottom of the Black Sea decided to bury to the existing mass grave, now located on the territory of the Admiral F.F. Ushakov. It was precisely because up to 1974, the Kuznetsov-Reshetinsky crew was considered missing, at first I had to face a pile of reports of irretrievable losses. And it was only much later that I came across the Registration Card of the military burial of 1254 soldiers, among whose names were Kuznetsov and Reshetinsky. 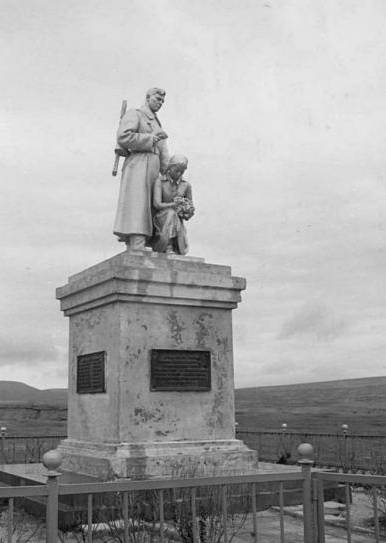 Over a mass grave in 1955, a monument was erected in the form of an 2-figured sculpture of a warrior and a girl with a bouquet of flowers. The time gap of the reburial of the crew and the creation of the mass grave itself affected the monument. Had to existing plate with a list of soldiers buried add new and different from the original plate. It happened not only with the crew of the IL-2. Land and sea reluctantly reveal to us the names of the fallen. 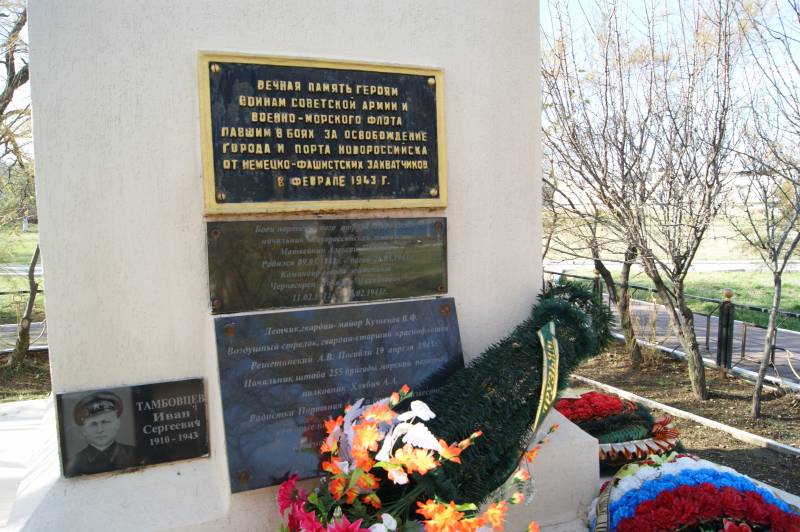 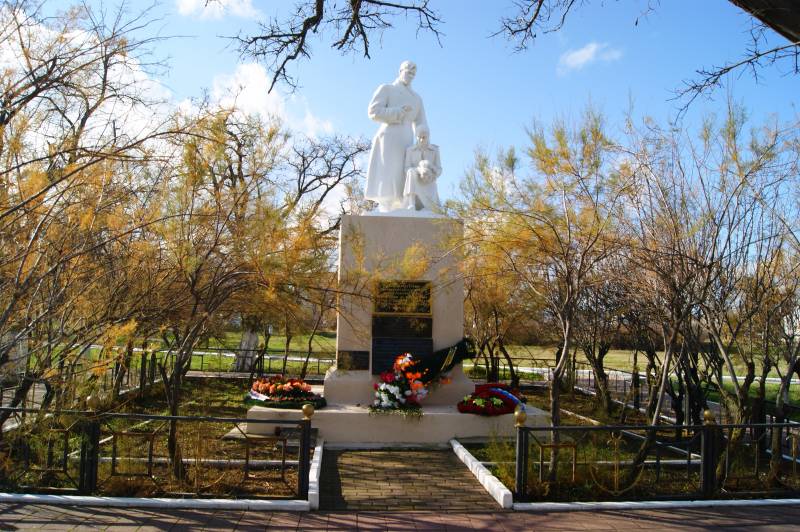 Unfortunately, either because of the curvature, or because of vandalism, but the sculpture of a warrior lost an automaton that was originally thrown over the shoulder 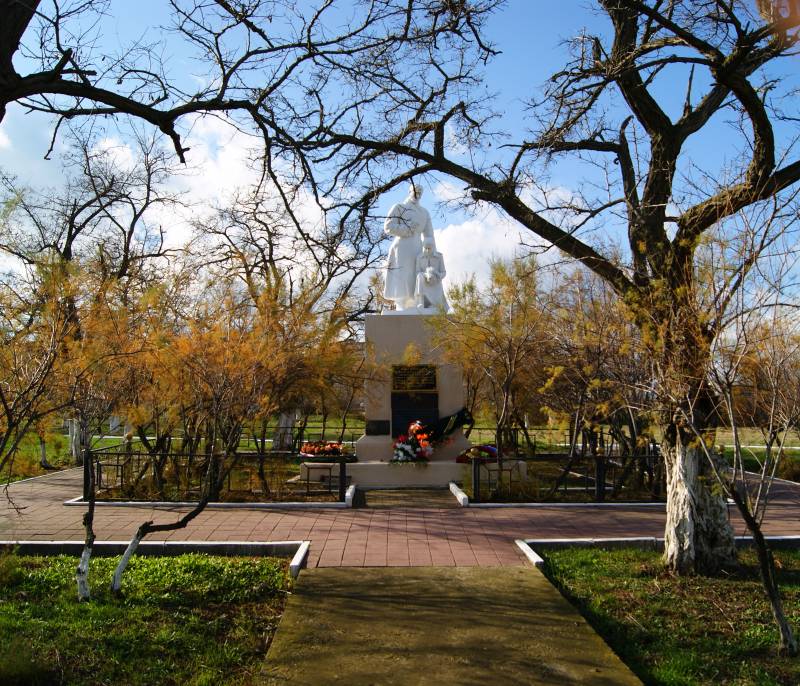 It is worth noting that the grave and the monument, which once arrived in a shameful “tower” (as the University named after Ushakov is called in Novorossiysk), now look very decent. And the place chosen, as I see it, is the right one - a couple of hundred meters from the famous IL-2 monument. Albeit in a somewhat hidden from prying eyes spot, but in a quiet and peaceful place in the shadow of trees a small alley. After all, our warriors deserve not only fame, they deserve peace.

Ctrl Enter
Noticed oshЫbku Highlight text and press. Ctrl + Enter
We are
Reports from the militia of New Russia for 27-28 September 2014 of the yearResults of the week. "Well, do not change me because of every idiot!"
Military Reviewin Yandex News
Military Reviewin Google News
13 comments
Information
Dear reader, to leave comments on the publication, you must to register.