November 24 2017
40
The SAR army and the Russian Aerospace Forces advanced on the west bank of the Euphrates in the south of Deir-ez-Zor. The situation in the Kurdish-controlled canton of Afrin in the province of Aleppo continues to escalate. Reports about it FAN with reference to Syrian sources. 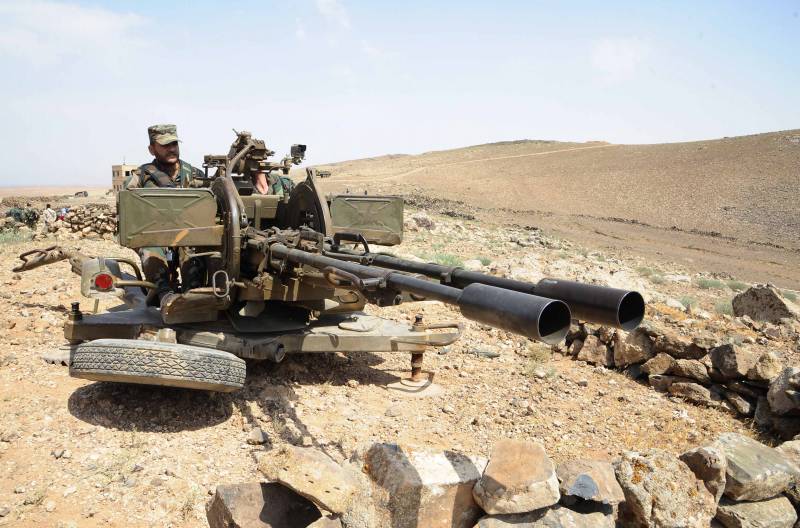 The Syrian army in connection with the intensification of attacks "Dzhebhat an-Nusra" (grouping banned in the Russian Federation) on the outskirts of Damascus on the eve of deployed new rocket launchers on the contact line with terrorists in Eastern Ghouta. Government drones stepped up intelligence gathering in the area, followed by attacks by Syrian air forces against terrorist targets.

The situation on the contact line between Turkish troops and Kurdish fighters of the Popular Self-Defense Detachments (YPG) in northwestern Syria (Aleppo Province) continues to worsen. In the area of ​​the city of Afrin and over the territories around it, which are under the control of the Kurds, there has been an increase in the activity of reconnaissance drones of the Turkish army. In addition, over the past 24 hours, Ankara continued to relocate all new units and equipment to the YPG demarcation line near the canton of Afrin. The government army of the UAR, meanwhile, is pushing down forces and resources to the south of the region in the area of ​​the city of Hanasser on the eve of a large-scale operation against the terrorists of al-Nusra.

Yesterday morning undercover military aviation Russian units of government units of the SAR have established control over the settlements of Dabyan, Garayba and Sabeyhan, located on the west coast of the Euphrates, south of Deir ez-Zor. Later, the Russian Ministry of Defense reported that the Syrian military, under the leadership of Brigadier General Sukhel Hassan, also managed to go further north into the territories occupied by the IS militants (the group is prohibited in the Russian Federation) and recapture the city of El Kraya. In the evening, Russian Tu-22M3 bombers attacked the IGV Deir ez-Zore. Command posts, clusters of militants and their armored vehicles were liquidated.

In the north-eastern part of the province of Hama on the eve of the fierce clashes between the terrorists of the coalition, led by "al-Nusra", and the group of the IG. Militants of the IG over the past day made several attacks and repelled at least eight villages from the enemy, re-forming a small territorial enclave in the area. The Igilovtsy fled to this region from the city of Akerbat and its environs, where during the operation of the Russian Aerospace Forces and the ATS army the so-called Akerbat Cauldron was created and then completely cleaned of terrorists.

The Israeli troops on the past day held a training exercise on the territory of the Golan Heights. According to local activists, this means that the situation in the south-west of Syria may soon escalate, since Tel Aviv, with the hands of illegal Syrian groups under its control, will try to seize the town of Khader again in order to expand its control zone in the Arab Republic. Earlier, it was repeatedly reported that representatives of the Israeli special services were supporting the radicals and participating in planning attacks on the positions of the CAP government army in the southern region of the country.

Ctrl Enter
Noticed oshЫbku Highlight text and press. Ctrl + Enter
We are
The IDF is preparing a hybrid military operation against the armed forces of Syria under the guise of a conflict with the army of Lebanon and HezbollahFull Syria summary for 24.03.2017 of the year
Military Reviewin Yandex News
Military Reviewin Google News
40 comments
Information
Dear reader, to leave comments on the publication, you must to register.