November 24 2017
22
“Trump wasn’t called to Sochi,” the American press quits. However, she herself did everything possible so that Donald Trump would not be next to Vladimir Putin when the Middle Eastern nights came in Sochi. Now it's too late to drink Borjomi ... 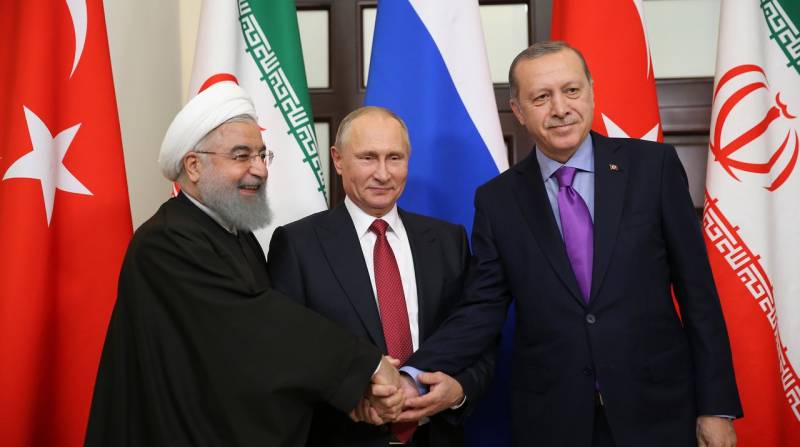 In the Syrian war, an informal union of Russia, Turkey, Iran and, in fact, Syria was born on its battlefields. Iran, we add, has a special relationship with Pakistan, so this alliance can spread to Pakistan. In Sochi, the military Syrian alliance seems to be formed into a political one. The United States and the West are not invited / barred from a Syrian settlement, and this is a failure of the entire US Middle East policy. And these are tectonic shifts in world politics!

While the West was holding back Russia on the western, European flank, its eastern flank collapsed: NATO lost Turkey in Syria. Formally, Turkey is still part of NATO, and in fact, the Western allies do not trust it, it does not trust them, and, de facto, Turkey enters into the Syrian alliance.

Yes, this is a situational alliance, that is, an alliance dictated by the circumstances during the Syrian war, in contrast to the ideological and vassal NATO. A situational alliance has its advantages: all parties are interested in it, no one needs to be bribed, forced, because no one will betray, defending their own interests. It has flaws that everyone knows about themselves.

It is obvious that the Syrian alliance will come into conflict with NATO in the Middle East and Southeast Europe, on the southern flank of NATO, seriously weakened due to the new status of Turkey. The deployment of US units in the Baltic States and Poland was meaningless, it was the last piece of advice from the American strategist Brzezinski, who left our world, and it turned out to be a loser. This time, his Russophobia let down the Americans.

The Syrian Union was born in the fight against LIH, which turned out to be an American client: our military talked about US cooperation with LIH, and at the end of the war, Turkey, even its president Erdogan, spoke. Syria and Iran have stated that the United States has links with ISIS openly and for a long time. The subtlety is that ISIS was a client of the “Clinton” globalist elite of the USA, its secret operation, which failed with the arrival of Donald Trump in the White House of Washington. Hence, this is inexplicable, because it is caused by secret reasons, the hatred of the globalist elite of the USA and “world media” to President Trump.

ISIS was basically armed with American weaponssafely captured by them in Iraqi American warehouses. There are more than enough facts of real interaction on the battlefield of the US Special Forces and ISIL: the terrorists were taken out of attack in Rakka, passed through their battle formations, "accidentally" supported by air strikes against Syrian troops.

At the highest level, the United States does not push such accusations, because they do not want a global scandal with the United States and a new confrontation, because Trump has come to the White House of Washington, but this is an open secret for everyone.

Apparently, the Syrian failure of the United States will lead to an aggravation of the hybrid war in the world, the State Department and the CIA will try to take revenge where they can: they will try to deprive Russia of the Winter Olympics in South Korea and the World Cup. Increase sanctions pressure on Russia in 2018.

The West of Russia has never sold any sensitive dual-use technologies, and will not sell, its personal interests begin here. Russia has always created these technologies by itself, and is creating today, thanks to its own scientific schools. Russia is the only, along with the West, has a full range of basic sciences, they were able to be preserved or recreated under the “Putin regime”, as the war in Syria proved, for which the West hates the Russian president and sculpts him from the image of a villain.

In general, Russia's Middle East policy is an asymmetric response to the global containment of Russia by the West: a response to the creation of a US missile defense system in Europe, and Obama's lies that missile defense is not directed against Russia, to a strategy of NATO expansion to the East towards Russian borders and pro-American coup in Ukraine.

Our liberal friends of the West, like Yablobnik Rybakov, suddenly lost their whole mind and asked: why did Russia come to Syria instead of raising the economy of its country? Russia in Syria is defending itself, along with the economy and the Rybakovs, so that the Americans will not plunge another country, very close to the south of Russia, to bring ISIS to power in it, who openly made plans for a terrorist invasion of Russia. So that the West does not blind the legitimate Syrian President Bashar al-Assad to the next "villain", making him responsible for his villains in Syria. This global containment of the United States and the West by Russia is an indispensable condition for the existence of Russia itself.

But the main ally of the United States in the Middle East, Saudi Arabia, suddenly broke out "palace revolution", civil strife among dozens of "princes of blood", claiming supreme power in the country, with an unpredictable outcome. The region and the Kurdish question, the last resource of the USA in its Middle Eastern party, are also in limbo. However, military-political potentials are important, and in the Middle East these aggregate potentials are on the side of the Syrian Union countries today.

Ctrl Enter
Noticed oshЫbku Highlight text and press. Ctrl + Enter
We are
America is waiting for polite peopleResults of the week. "Well, do not change me because of every idiot!"
Military Reviewin Yandex News
Military Reviewin Google News
22 comments
Information
Dear reader, to leave comments on the publication, you must sign in.