How the Russian army learned to wage war (and destroy enemies) 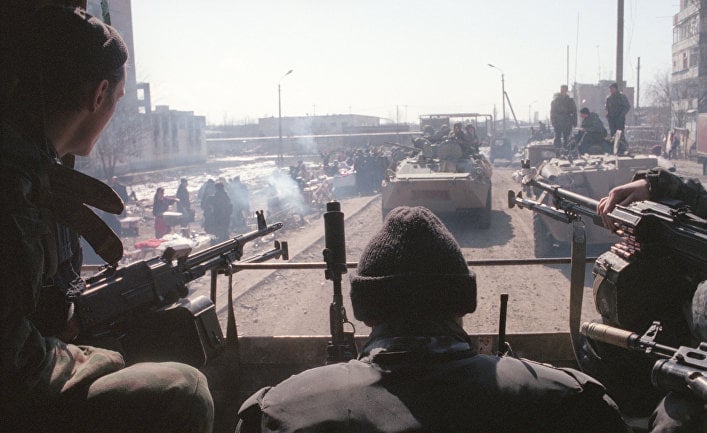 The lessons that the American army has learned in warfare in urban environments are mostly simple and clear: fighting in the city is long, associated with large losses of personnel and materiel, during such hostilities it is important the interaction of various types of troops and so on. This is known to many armies, both powerful and not. This experience has been gained over many years, starting with Stalingrad and Hue. One of the longest and bloodiest battles of the Vietnam War
In a study conducted by the US Asymmetric Warfare Study Group, of particular interest is how Russia learned how to fight in cities. This study is called “Modern fighting in urban environments. Lessons from 1980 to the present ”(Modern Urban Operations: Lessons Learned from Urban Operations from 1980 to the Present). It is devoted to the analysis of ten urban battles, including three that led Russia. The research results were published as a report in November 2016, and recently this report was posted on the Public Intelligence website.

The catastrophic Russian attack on Grozny in 1994 was an example of how not to fight in the city. A rather small group of Russian troops of 25 thousand people tried to storm the buildings in this city. Small groups of Chechen fighters, armed with light anti-tank weapons and sniper rifles, found and destroyed Russian columns tanks and motorized infantry, using the features of the urban area for cover and camouflage.

In the American study, Moscow blames the fact that it could not attract the Chechen population to its side and did not prepare the Russian people for this conflict. In the Russian columns, moving along the streets of Grozny, management was not properly established. Russian commanders used reconnaissance units, but did not support them, as a result of which the scouts were forced to fight instead of conducting reconnaissance and reconnaissance.

“The subunit commanders suffered from their own arrogance and scornful attitude towards the abilities of the Chechens,” says a study by ground forces. - The soldiers were not ready to resist, often fell asleep and poorly mastered the situation even during the offensive. Most of the crews of armored vehicles did not have the right maps and navigation tools to navigate in an urban environment. This often led to ambushes and dead ends. ”

The second battle for Grozny in 1999-2000 was fought quite differently. This time, Moscow concentrated the 100 numbering of thousands of people there and took information operations under its tight control. “By limiting negative media coverage, Moscow had the opportunity to strike indiscriminately, razed the city and broke the Chechen defenses before arriving in Grozny,” the report says.

Russia also actively used artillery and AviationHer troops were better trained and informed. The advancing group included more engineer-engineer and reconnaissance units. This time the tanks did not conduct street battles at a short distance, but supported the advancing fire. “Russian soldiers were better trained and equipped to maneuver on the streets of Grozny,” the study notes. - As a result, they better understood the nature of the battle in the city and correctly assessed the enemy. The commanders more often made tactical breaks, giving soldiers the opportunity to study maps, floor plans, and underground communication systems to understand the movements of Chechen fighters and correctly assess where the centers of resistance could be. ”

Due to high-quality training and effective tactics, the Russians did not suffer another and humiliating defeat on the streets of Grozny. After two months of fighting, the Chechen fighters left the city, and within two years the region was completely occupied, and the violence there began to wane. During this time, the Russians very effectively broke the resistance of the main Chechen forces, took control of the countryside, and only then began fighting in urban environments.

The US Army also carefully studied the second battle for Donetsk, which took place in 2014-2015. It was conducted between the Ukrainian troops and the Ukrainian separatists, who enjoyed the support of the Russian military and their firepower. American analysts point to this battle as a clear example of the Russian strategy of hybrid war as applied to urban conditions, in which both regular troops and irregular formations take part. “The upgraded optics, heavy armored vehicles, artillery and air defense weapons supplied from Russia enhanced the combat capabilities of the separatist forces, which turned into a new army,“ superior to their adversary. ”

In Donetsk were heavy fighting for the airport. “The tactics of small units in the limited space of the airport terminal became an example of what problems may arise in modern combat in urban environments. The Ukrainian military used any airport capabilities to achieve advantages in the conduct of defensive operations. In response, Russian troops stepped up their artillery and tank fire. ”

Ctrl Enter
Noticed oshЫbku Highlight text and press. Ctrl + Enter
We are
Commentary on A. Petrov's interview “Fire and Tactics in the Russian Army: Another Look”A great interview with Sergey Lavrov: about Ukraine, Obama and Iran
Military Reviewin Yandex News
Military Reviewin Google News
36 comments
Information
Dear reader, to leave comments on the publication, you must to register.