From hell to hell: IG militants who fled from Abu Kemal hit the new cauldron 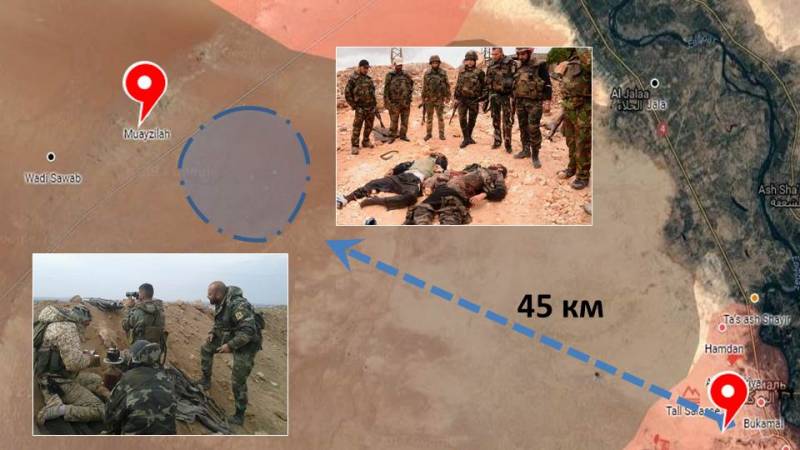 The noose around the Islamic State terrorist organization has practically dragged out. The terrorists did not have time to recover from the storming of Abu Kemal, as they got into a new trap in the area of ​​the Mezile settlement. It is here that the surviving handful of terrorists from the previously liberated settlements come running.

What is happening now with the terrorist organization “Islamic State” is quite appropriate to call the death agony. A little more and with this plague in Syria will be finally over. Arab news agencies, referring to the command of joint operations of the Armed Forces of Iraq, previously reported heavy igilovtsev losses during the storming of the border Abu Kemal and the subsequent cleansing of the village. Those pitiful remnants of militants who still managed to survive, hiding in the desert to the west of Abu Kemal, briefly extended their existence.

Now the south-east of Syria is no longer a problem area for government forces and their allies. Militants are deprived of the possibility of supply by Iraq, and the jihadists themselves are practically gone. Neither suicides from suicide battalions, nor pseudochaliphatic groups of elite ingimasi helped the thugs.

Rescued from captivity, residents of the south-east of Syria say that the militants are demoralized and broken. There are cases of desertion and disobedience to orders. Local people say that even before the storming of Abu Kemal, several Islamic radicals left the area of ​​hostilities. It seems that the lack of manpower, igilovtsy made up for, including at the expense of minors. Among the belts of martyrs found in Abu Kemal there are small sizes, possibly designed for children and teenagers.

That gloomy and formidable Islamic State, which once held more than half of Syria’s territory and a third of Iraq’s fear, is now forced to hide on a small patch in desert lands and underground tunnels near the village of Mezile, a few dozen kilometers west of Abu Kemal . Here are the fugitives from other previously liberated settlements of the province of Deir ez-Zor. According to preliminary data, no more than 150-200 militants are surrounded.

The igilovites who fell into the trap do not abandon attempts to break through the environment in small groups at night. However, small units are under round-the-clock surveillance of the Russian aviation, which prevents attempts to escape at any time of the day.

It is reported that on the eve, detachments of government troops with the support of Russian pilots destroyed more than 50 terrorists, over a dozen pickups with heavy machine guns and a few units of mortar guns.

Being blocked on all sides by extremists at the end of resources, there is a clear shortage of ammunition: often the attempts of terrorists to counterattack government units entail heavy losses among the militants.

Ctrl Enter
Noticed oshЫbku Highlight text and press. Ctrl + Enter
We are
What you didn't want to know about EnglandInterview by President Bashar Al-Assad to the Sunday Times
14 comments
Information
Dear reader, to leave comments on the publication, you must to register.