November 23 2017
8
The CAA, with the help of the Russian Aerospace Forces, recaptured from terrorists a vast area on the west bank of the Euphrates in the Deir-ez-Zor province, the SAR army is preparing operations to capture the militant base in the east of Idlib, reports FAN with reference to Syrian sources. 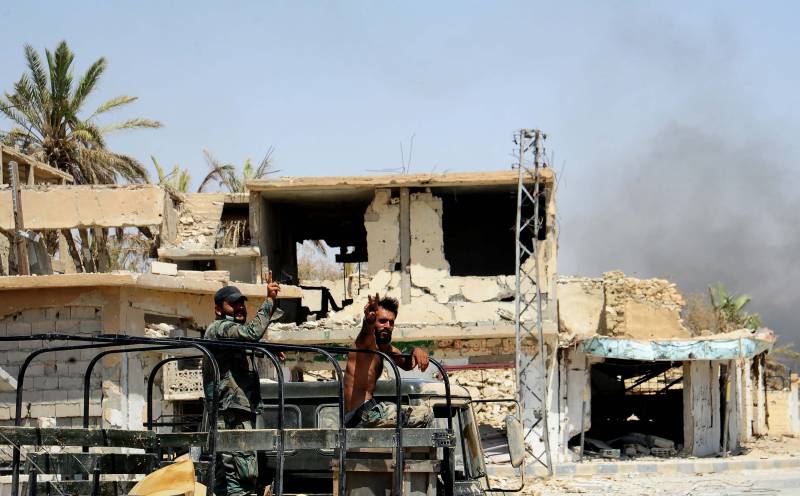 Over the past seven days, 33 people were killed and 154 were injured during shelling by Islamist militants in Damascus and on its outskirts. In Eastern Ghouta, where the enclave of illegal groups is located, an armistice regime operates within the framework of the agreement on the creation of a de-escalation zone, but militants from the terrorist alliance led by Dzhebhat al-Nusroy (grouping in the Russian Federation) are also based here. Yesterday morning, the Syrian army fired at alliance strongholds near the cities of Harasta, Irbin, Al-Shiffonia and Madeira, northeast of Damascus.

The humanitarian aid of the United Nations was delivered to the northern part of the province of Homs yesterday morning. Help arrived in the city of Deir Ful, occupied by militants of armed anti-government groups. Food sets will be distributed among residents of neighboring settlements, also located inside the enclave of the so-called “moderate opposition”. As many experts note, the assistance provided by the UN and other similar Western organizations to Syrians is markedly politicized, since their humanitarian convoys arrive only in those areas that are controlled by opposition militants. At the same time, a significant part of the cargo is often in the hands of the Islamists.

Throughout the day, the government troops of the SAR along with the military aviation The Russian Federation developed an offensive in the south of Deir ez-Zor province - in the area between Abu Kemal and Meyadin to the west of the Euphrates. Allied efforts are concentrated on the cleansing of the last territories remaining under the control of the IS group (banned in the Russian Federation). On the eve of the CAA, with the support of the Aerospace Forces, they were advancing on the IS positions in the direction of the settlements of Garaib and Al-Ashar. They managed to recapture part of the positions and get closer to the parts of the Syrian army operating in the vicinity of Meyadin - now there are less than 15 kilometers between them. In addition, now the troops of Bashar al-Assad fully control the area between the settlements of Salihiya and Dabyan.

In the outskirts of Abu Kemal, completely stripped of its IS, the militants tried to launch a counterattack using suicide bombers. However, thanks to the intelligence obtained by the Russian Federation, the attack was prevented: the “jihad-mobili” of the IS, as well as several mortars and other weapons were eliminated by intensive shelling of the CAA.

The Turkish army formed the third observation point in the province of Idlib. Ankara continues to increase its military presence in the region where the last de-escalation zone was formed. The Turkish military is monitoring compliance with the terms of the truce, but with their appearance in the north of the province the situation has deteriorated significantly as Turkish units occupied the territories near the line of contact with the Kurdish YPG forces that control the canton of Afrin.

Government troops over the past day continued to build military power in the north of the province of Hama on the eve of the planned breakthrough towards neighboring Idlib. Thus, on the eve of the operation to capture the strategic airfield Abu Al-Dukhur, additional units of the CAP Army and the National Defense Forces (NDF) were redeployed. Al-Nusra and its allies in the terrorist coalition, meanwhile, continued to fire at the facilities of the Syrian army and the assault forces north-east of Hama in order to regain lost key positions, including the recently liberated settlements of Rabda and Al-Arfa. Data on the losses of the parties is not given.

Ctrl Enter
Noticed oshЫbku Highlight text and press. Ctrl + Enter
We are
The Iranian rocket plant in Banias was too tough for the Israeli Air Force. What does Tel Aviv fear? Details of the fight for Deir-ez-ZorReports from the militia of New Russia for 7 September 2014 of the year
8 comments
Information
Dear reader, to leave comments on the publication, you must to register.