Ukraine 2019: Putin is our president? 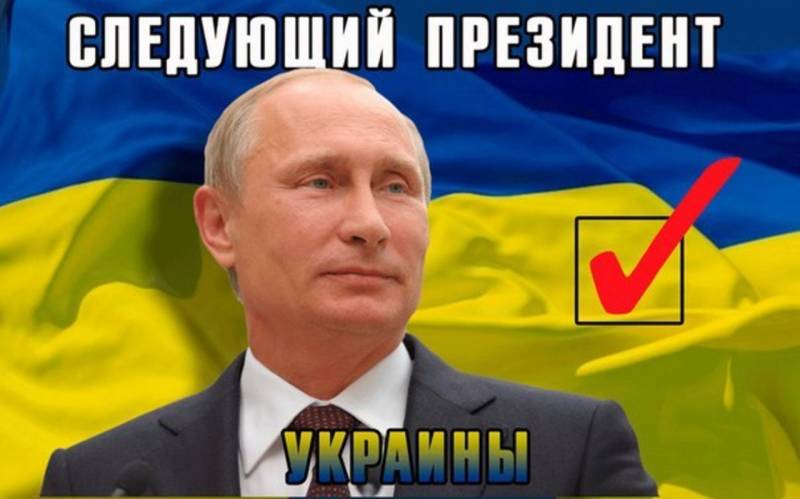 At the very beginning of 2015, in a poll conducted by the Week, when asked if you would entrust the administration of the country, 84% of respondents answered: “Vladimir Putin”, and also 5% were ready to entrust the management of Ukraine to Alexander Lukashenko. And this is without the Crimea and the Donbass, a year after the start of the second Maidan and immediately after the defeat of the Kiev regime army in the Donbas ...

In 2014, during the march of the “Azovs” in Kharkov, an inconspicuous person, one of the founders of the Kharkov movement “Great Russia” Mikhail Onufienko (nickname Mikle1) started to crowd into their column. He took root in order to listen to what ordinary Nazis of Ukraine say not on camera, but among themselves. And they said between chants SUGS and curses to the president of Russia, that "Vladimir Putin is a peasant, we would have such a leader, we would then ..."

Here it is, the truth of life is not on the camera. Not the same as the one in which we are forced to believe.

In August, 2016, the third president of Ukraine, Viktor Yushchenko, in an interview with the Ukrainian edition of Apostrof, reported terrible figures for the Ukrainian man in the street. 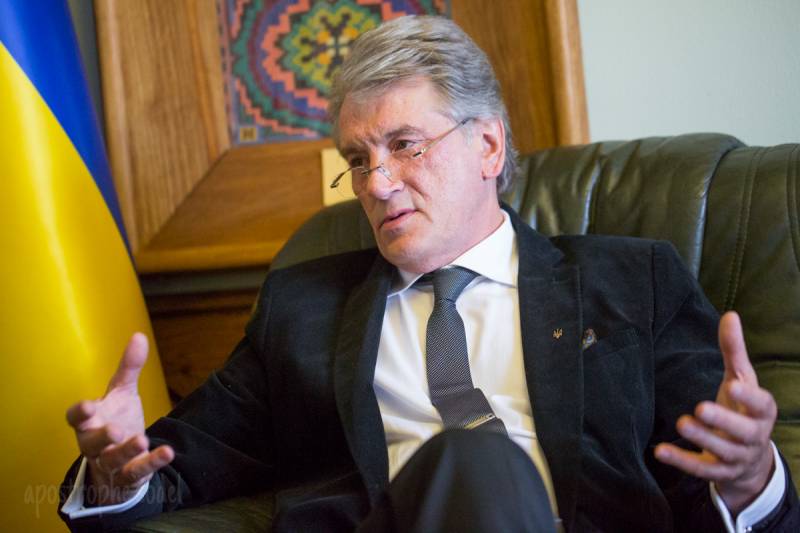 “When we were doing sociology in the 2008 year, even when I was president, then 70% of Ukrainians wanted to be president of Putin. Then, in 2008 -2009, the question “Would you like to see Vladimir Putin as president?” More than half of Ukrainians answered “yes.”

What is this about? Each president of Ukraine, one and a half years before the re-election, is trying to build a strategy to repeat his success. And for this, he orders a case study. Not the one that is later published in the press, but the real one. It was this “sociology" that Yushchenko ordered in 2008. The result was then stunned by the Ukrainian political elite and its sponsors in Washington. It turned out that, as a result, the first Maidan had a consequence of a sharp increase in the popularity of Ukraine and its president in Ukraine.

What do Ukrainians like about Putin? Honesty, decency and attendant success. Just what almost no Ukrainian politician has. And where can they come from if the entire political elite of Ukraine was created under the conditions of the so-called two-vector, in which cynicism, unprincipledness, deceit, and ability to betray were considered the most important qualities?

This system cannot produce its own Putin, no matter how hard she tries to do this. Therefore, the sympathies of the Ukrainians were constantly on the side of foreign leaders. And Vladimir Putin and Alexander Lukashenko have always been the most respected ones.

According to a survey conducted by the sociological group Rating, at the very beginning of 2016 of the year, at the peak of the information war against Russia, 10% of Ukrainians supported the policies of Vladimir Putin. 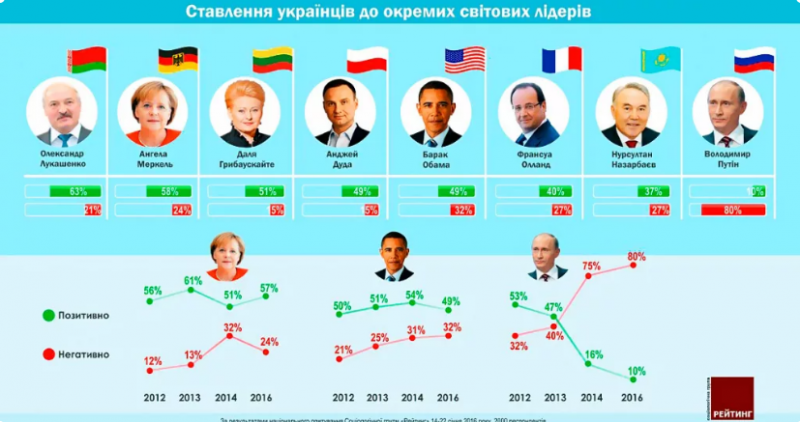 And, as we see, then, instead of him, in the first place, the inhabitants of the country put not the democratic leaders of the United States, Germany or France, but the president of Belarus. Why so dramatically changed the rating of Lukashenko and Putin, of course. In the autumn of 2016, it was dangerous in Ukraine to say that you support Putin’s policies. And supporting Lukashenka was not considered a “zrada,” which many took advantage of.

This is a very important point. Internally, the overwhelming majority of Ukrainians are ready to follow the path proposed by Lukashenko and Putin. He is closer to them than the so-called Western "democracy." And they are very vindictive and do not like those who have deceived their expectations. And Europeans and Americans should always remember this.

This is a huge problem for Washington. Ukrainian society has become very susceptible to propaganda and he has a short memory. This is in the 2013 year, played in favor of the United States, when the Ukrainians, having forgotten the consequences of the first Maidan, did not interfere with the second. But in the same way, it may work a little later in favor of Russia. After all, there are exactly as many steps from love to hate as to the return, and the memory, as we have already learned from the Ukrainians, is very short.

It may be objected that this is no longer possible, and will lead to the usual arguments: “A lot of blood was shed in the Donbas,” etc. And I will not argue, but just give one example. Chechnya How much blood was shed from both sides? In terms of per capita, two orders of magnitude more than today in Ukraine. And if someone in 2002 had said that Chechnya would love the Russian president and support him, this person would be considered insane.

So, Ukraine will soon again face a choice: which way to go next. 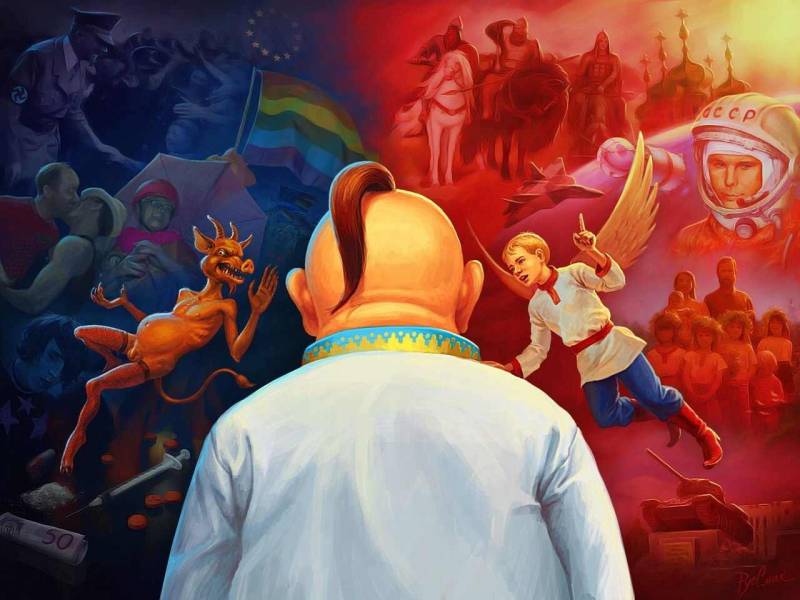 The path to Europe turned out to be a dead end. Her there simply do not want to take. An attempt to build a self-sufficient nationalist state in Ukraine is also doomed to failure. For this, it does not have an internal resource, and all its neighbors are already against today, especially the Poles. So, sooner or later, Kiev will be forced to face east, especially since the population of even the current remnants of the country, as we saw above, is always mentally ready for this turn.

Today it seems impossible to many. Just as in 2002, the current Chechnya seemed impossible. But there is nothing impossible in the world ...

Ctrl Enter
Noticed oshЫbku Highlight text and press. Ctrl + Enter
We are
Reports from the militia of New Russia for 27-28 September 2014 of the yearResults of the week. “Take off your hats! Expose the head! The body will be taken out now! ”
Military Reviewin Yandex News
Military Reviewin Google News
156 comments
Information
Dear reader, to leave comments on the publication, you must to register.