The shrines of the island of Cyprus (part 2)

Before telling about the shrines of Cyprus further, you should at least share your impressions about the island itself. It is said, and it is true that Cyprus was a colony of England. But judging by some circumstances, one might get the impression that he was, and today continues to be a colony ... of Russia. If there are three flagpoles in front of the building, then there is no doubt that the flag of Cyprus will fly on one, the UK will fly on the other, and Russia will fly on the third! Shops with Russian names, at the entrance to cafes and restaurants announcements "we speak Russian" and we have a "Russian menu", discounts are offered to Russians for wine. In Russian, Cypriots speak through one, as in English, so that at least that’s it, and you will explain! Cyprus is an ideal place for those who go abroad for the first time and fears that they might not understand him there. Where, where, and in Cyprus, Russian people are always understood and in any condition. Transport on the island is well developed: air-conditioned buses, you can rent a car and quad bike, in a word, it is convenient to move around the island. 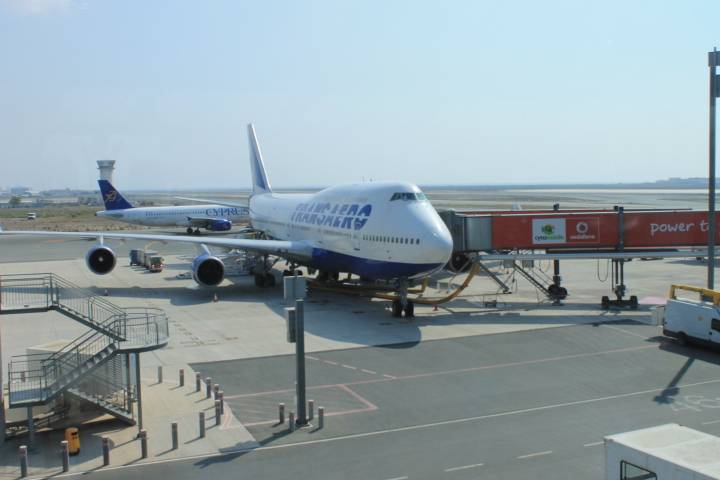 This Boeing-747 will take you to the island, which, among other things, is even interesting to fly on - it’s very big. 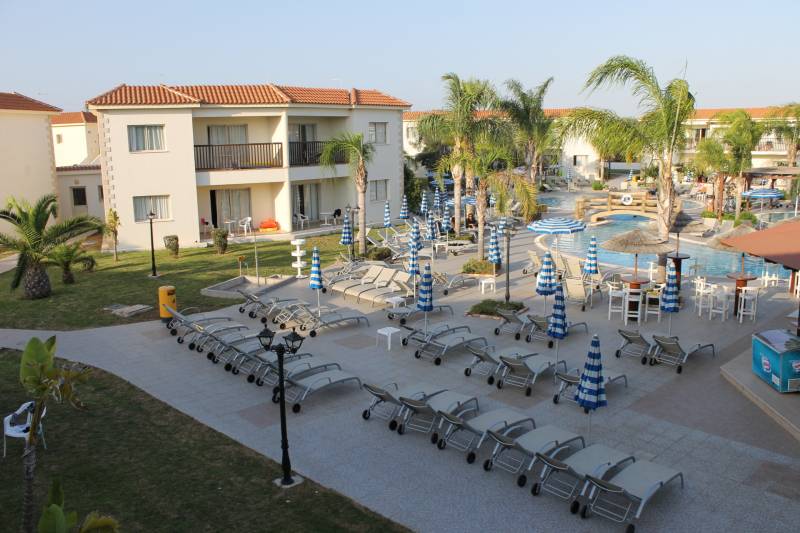 Hotels there are different, for every taste and price, but I personally prefer these, with bungalow-type houses with a separate entrance. This is, for example, Tsokkos Paradise Village on the outskirts of Ayia Napa. But the "margin" is a relative concept. 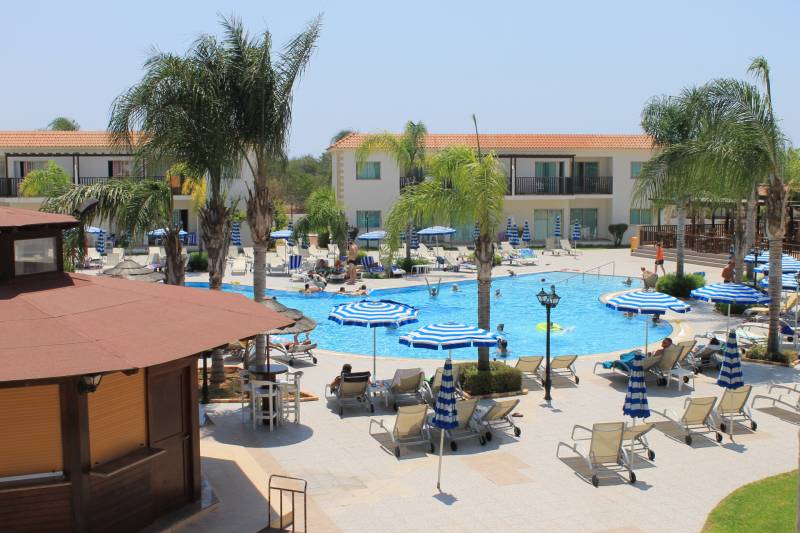 In the center - a huge pool. Many foreigners (Germans) swam only here and did not even go to the sea (idiots!). Some in the reviews on the web complain about the poor performance of the Internet. So ... I just want to say: “You did not come here over the Internet, but over the sea, the sun and the beauty of the local temples. So enjoy it, you are our poor! ”You sit here under an umbrella, you drink beer, and you think -“ Live well! A good life is even better!"! 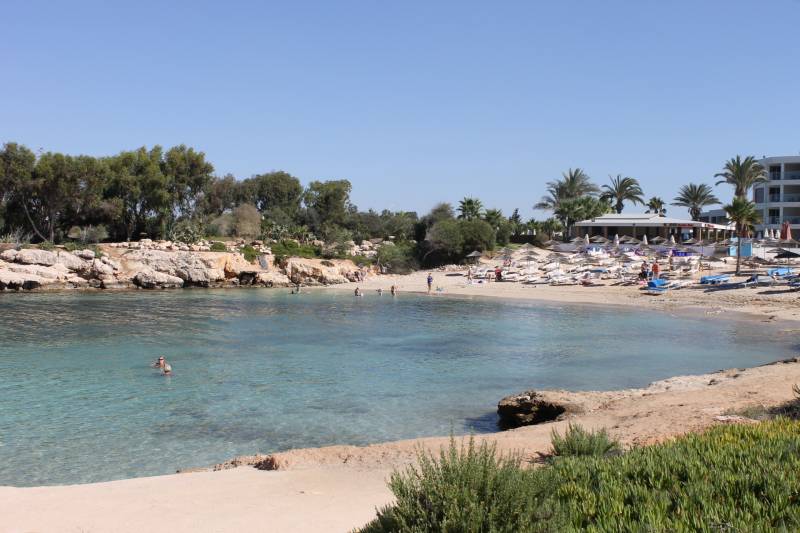 Very close to the beach is Nissi Beach and many such charming lagoons. Well, I wanted a “divine”, so two kilometers from this hotel right on the sea there is a chapel and the cave of St. Thekla (Tekla in Greek). As he left the hotel - to the right, to the water park, and then to the sea to the left following the signs! The cave keeper is an elderly Greek, a lover of kissing Russian women of balsac age, will gladly show you everything there. In the cave, however, frankly disgusting. I do not understand why to gain holiness you need to live in such a hole. True, the beach is located a little further on. And then trudge through the local heat and stuffiness in order to look at the dark stinking hole - this is not for everyone. This "feat of faith!"

By this time, the abundance of Orthodox churches in Cyprus had already caught my eye, interest in them appeared, and along with it, the most famous and revered monastery in Cyprus in the Troodos Mountains wanted to visit ...

It is hardly an exaggeration to claim that this monastery is the most famous and most crowded tourist and pilgrim monastery on the island. It was founded for the sake of the miraculous Kikkskoy icon of the Blessed Virgin Mary, according to legend, written by the holy Apostle and Evangelist Luke himself. 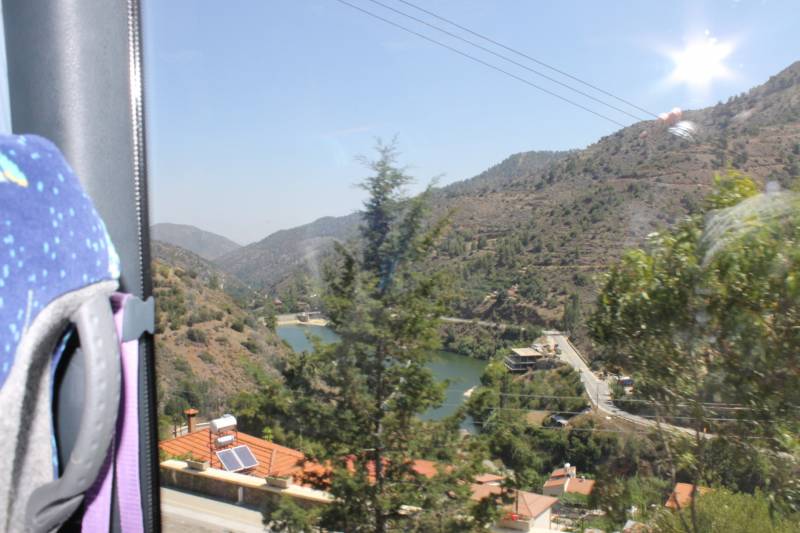 “The road winds around like a ribbon, there is no end to the road, there is nothing more necessary than brave hearts!” By the way, at the bottom left is one of the main reservoirs of the island. In a drought, it dries out completely and then water is brought to the island by tankers, as we have oil.

Bearing in mind that the “main robbers” in Cyprus are Russian tourist companies, they bought a tour to the monastery from the Bulgarians. The same Russian guide, the same bus, but “we have” 56 euros per person, and the “bratus” has only 26. For four, the savings are very substantial. 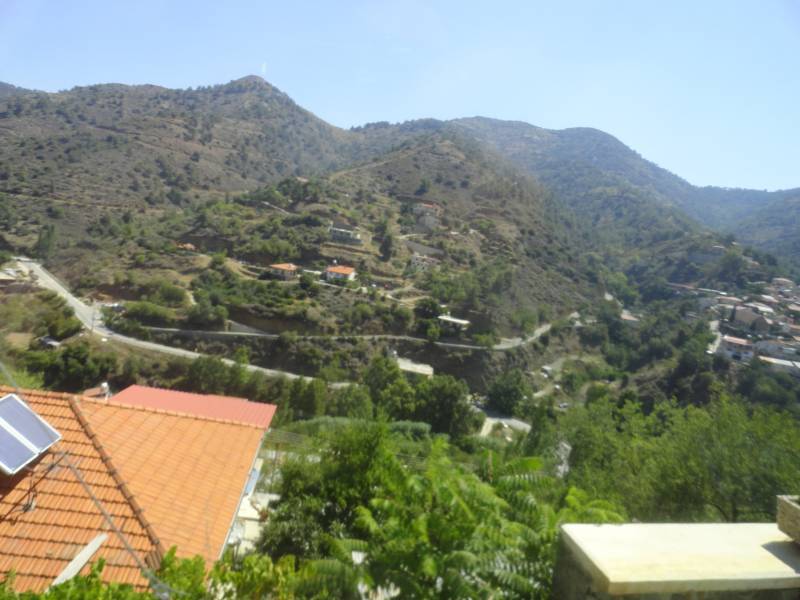 On the way to Troodas we were told a long time history this icon. It is “divine” from beginning to end, and its essence, if briefly, is that this icon, before being in Constantinople, wished to be in Cyprus, and ... it turned out in the end! That is, by hook or by crook, but she made her own! True, the emperor bargained for such a condition that the face of the Mother of God on her should now remain closed, so that those who prayed would have more reverence for her. So today the icon is almost completely, except for the hands, curtain velvet curtain. And who, they say, will launch your hands under this cover - that they will wither away! Because next to the icon hangs an ancient sword! It inspired me very much and clearly why - the sword, after all! 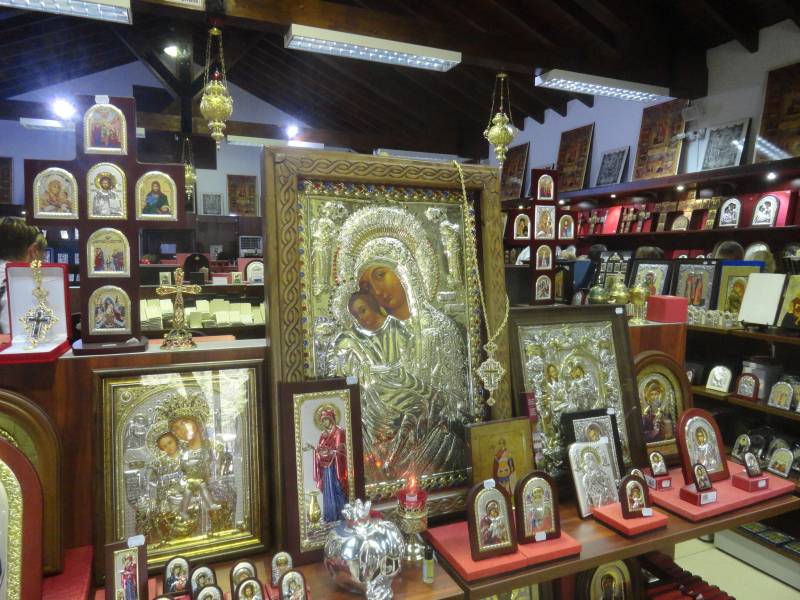 However, the first place where tourists are brought ... is not a monastery, but a store of icons and all kinds of divine goods located above it on the mountain. The thought involuntarily creeps in that Mammon is closer to God here than the monks actually serving him, but then he disappears, so many beautiful things of all kinds are exposed here. The icons are large and small, in silver or even in gold salaries, healing oil, candles (“cheaper here than in a monastery!”) - in a word, skill and beauty unwittingly climb into the soul. However, you will not fail to be reminded that if you bought an icon here, then you can consecrate it below! Here, that is, just above the Kykk monastery (and still higher than the store!), Is the tomb of Archbishop Makarius - the first president of the Republic of Cyprus, who always has an honor guard.

The monastery is located high in the mountains. Therefore, there is a wonderful air and breathe very easily. In addition, pines grow around it. But the streamer that leads there, yet he has no concrete fences, nothing! Looking at what your bus makes pirouettes, you unwittingly start that ... well, that very thing. Therefore, it is impossible to go there without a pack of aeron, well, unless you are a retired pilot or an old sea wolf. 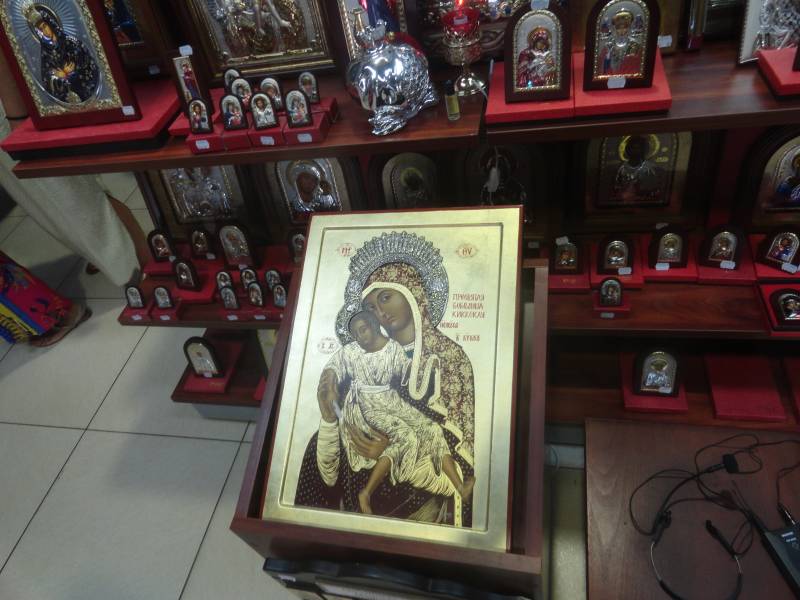 On the way to the monastery, stories are told: here, overnight, all Turkish troops died of God's craft (then the stench was from so many thousands of corpses!), Then a Cypriot millionaire fell ill with cancer, sacrificed all the money to the monastery, prayed to a covered image and ... was healed In a word - everything is in the mood! 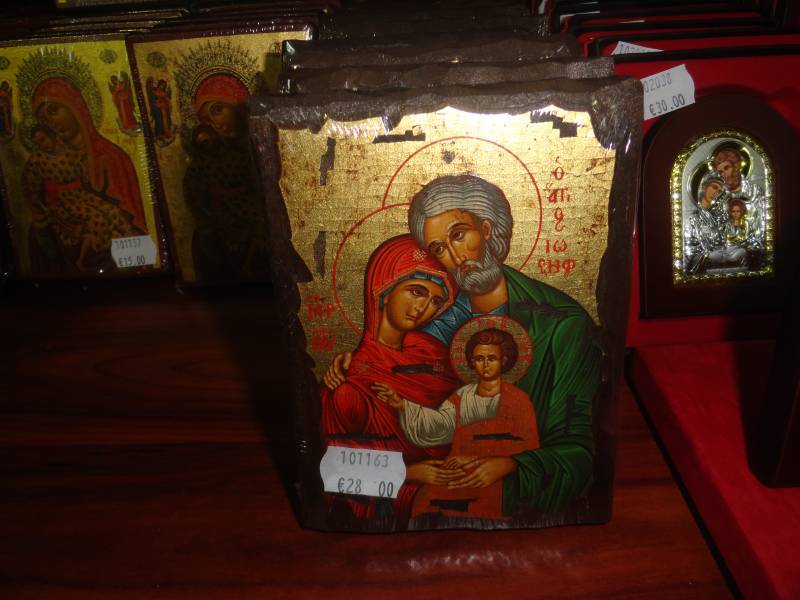 Prices are quite reasonable. This copy of the icon of the Byzantine letter is worth only 28 euro! 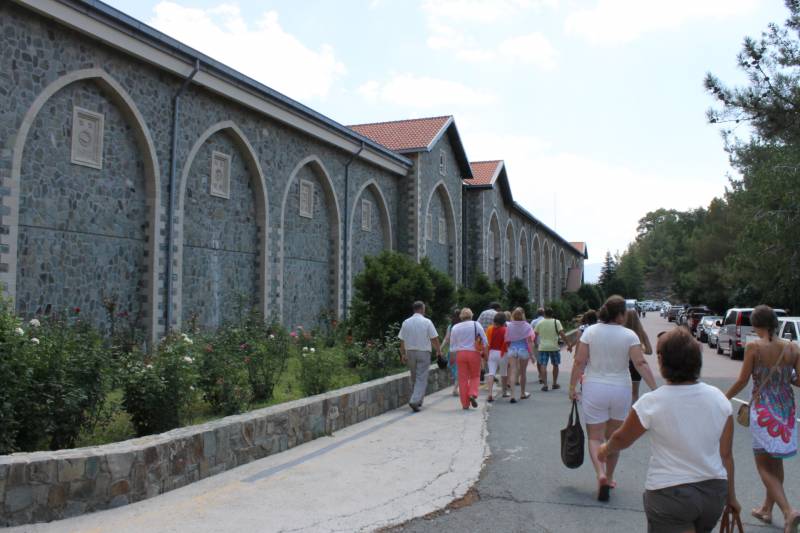 People rush from the store to the monastery. Do you know why they are in a hurry? Because buses with tourists approach him every 20 minutes, and the next batch of 40-45 people rushes to his entrance. 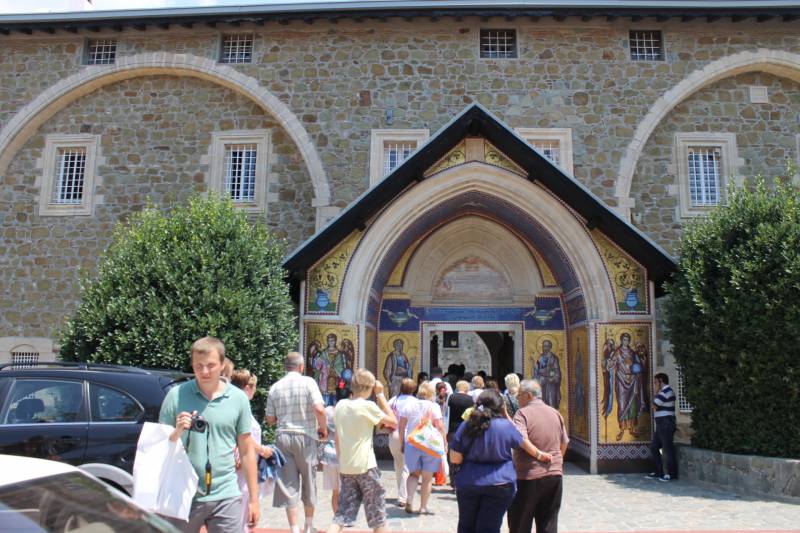 There are so many people that no matter how hard you try, and without them you won't be able to photograph the entrance to the monastery!

Kikk monastery is one of the richest monasteries on the island. The church inside is very richly decorated. But the special attention of tourists is attracted by the beautiful gilded mosaics made on the walls of the galleries surrounding the monastery courtyard. Among them are the amazingly beautiful mosaic icons, as well as various scenes from the biblical history of the Old and New Testaments. 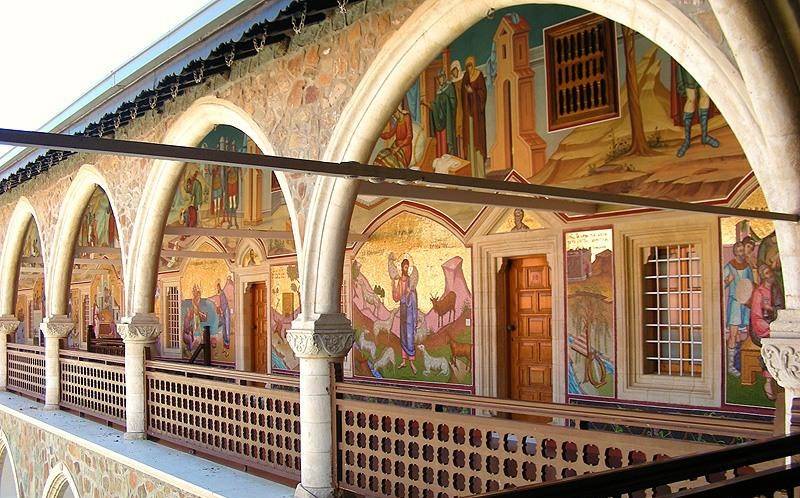 It is very inconvenient to photograph these mosaic scenes due to the peculiarities of the monastic architecture, but at least there is something here, but it can be seen ...

In general, in my opinion, it has long been known to all that women should enter the temple of God with their heads covered and shoulders closed, and also in a long skirt, well, men should change their shorts for pants. But since the majority of tourists from the heat and serpentine brains work with difficulty, and many simply never had them, they do not remember about these rules. But the monastic brethren, “meeting the wishes of the working people”, made it easier for all forgetful to enter the monastery's shelter: at the entrance, all those dressed in the wrong way are offered ... beautiful terry robes of purple color with a hood, which hide both shoulders and shorts. And all the "hollow-shoulders" and "bare-legged" tourists and tourists at once become like good-natured pilgrims of the times of St.. Helen! 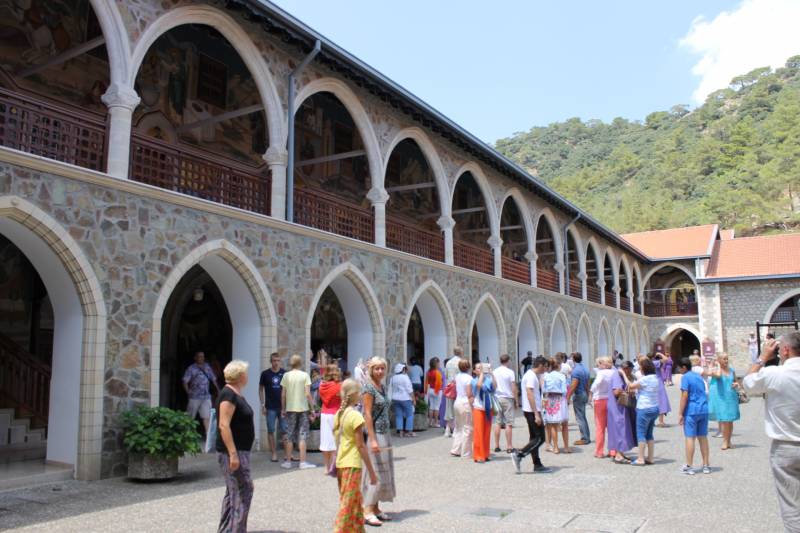 Look at the center of the photo - you can see how one lady is wrapped in this purple robe! 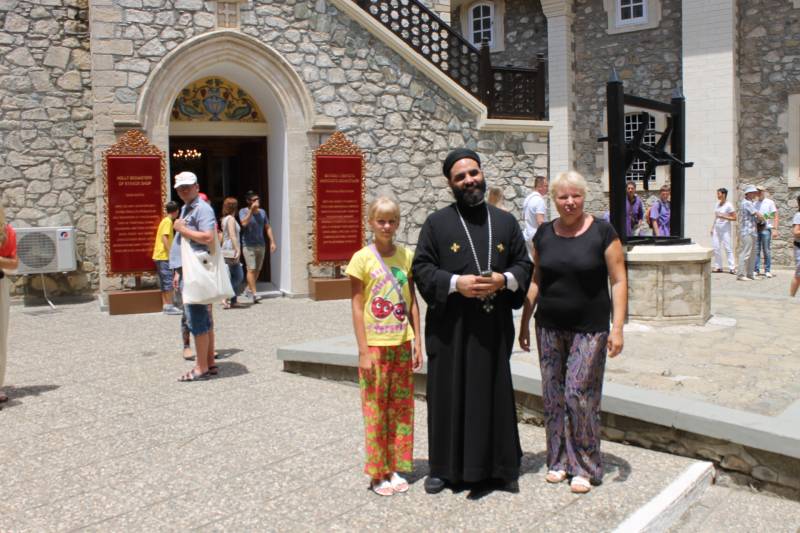 Nowhere have I met such smiling and welcoming monks, who in addition are so eagerly taking photos with tourists.

Entered the church, where the hung icon is exposed. And there ... all, as we have at the end of 80-s for sausage. True, moving fast. The guide explains: “You have thirty seconds. Look at the icon, attach to it, then turn to the monk, get a fleece with holy oil from a lamp in front of the icon and move on. ” The guide continues: “The monastery was founded in 1100, here is the Kykkos icon, its face is covered. Pay attention to the chandeliers: the third and fifth of them were donated to the monastery of Nicholas II in a particular year. ” Above the crowd the chandeliers really hang one another beautifully. I take a closer look, and on one inscription: “Brought as a gift by the emperor All-Russian Nicholas II and Sovereign ... in the summer of 1902 of the year ...” That is, they were here and brought it. It is possible that the sovereign stood here with the sovereign and prayed in front of this icon. The Lord asked for something ... And they got 1917 for a year and a basement ... But yes! 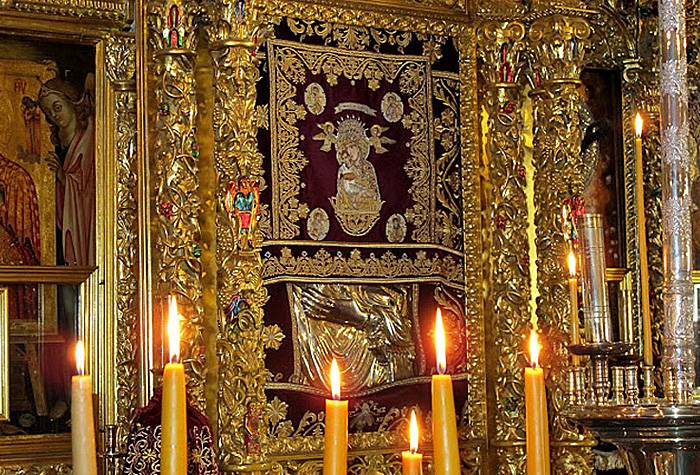 Next to the icon of oars is not a sword, but some souvenir dagger. And instead of a severed dried hand - as I hoped - a brush carved from wood. Ecstasy, standing in front of the curtain, I did not feel. Then the monk threw us some cotton wool in turns and said in Russian: “Dries up - just burn! Do not throw away! Head ache - rub! " 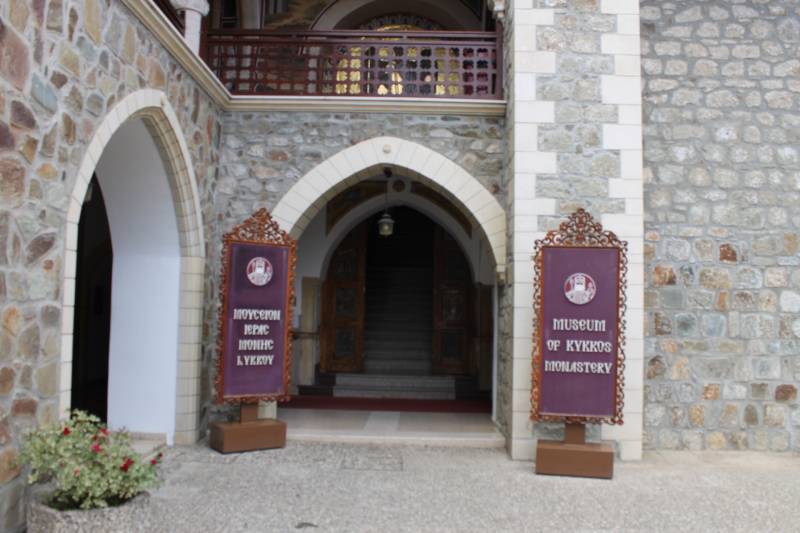 In the museum of the monastery, we have not got on time.

They took it in the evening, when my daughter got a headache due to the heat and stuffiness. First one. Then everyone else smelled and half an hour later the head passed. After the visit itself, they again got fucked by the bus - 40 was given to the group for the whole tour, and they went on to feast at some mountain cafe, drink local wines and buy silver and lace. By the way, there are other monasteries in the mountains: the monastery of the Mother of God of Trooditissa, the monastery of the Mother of God of Trikukja, where they are necessarily served tea, bread and very tasty jam, which the sisters cook themselves, but we did not get here, as well as the holy temple the martyrs of the Moors. It is necessary to specifically go to the mountain monasteries and temples.

Ctrl Enter
Noticed oshЫbku Highlight text and press. Ctrl + Enter
We are
Chernobyl notebook. Part of 3The hunt for the Blackbird
Military Reviewin Yandex News
Military Reviewin Google News
35 comments
Information
Dear reader, to leave comments on the publication, you must sign in.