"She is the mistress of the heart,
In tournaments fought for her
Invincible spear.
And by her sword was inspired
Who hurt the husband of so many wives:
The hour of death came to the Sultan -
Mahomet did not save him either.
Shining golden strand.
The number of hair does not count, -
So there are no heathen numbers,
Which killed carried. "
Beloved! Honor wins
I give you; I have no glory.
Rather, open your door!
Dressed in the garden night dew;
The heat of Syria was familiar to me
I'm cold in the breeze.
Open your quarters
I brought glory as a gift of love. ”
(Walter Scott "Ivanhoe")

Over time, tournaments from preparation for war turned into a bright and colorful sport with its tote and rules, very, very conditional. In previous materials, it was, for example, about this kind of fight, as rennen. So, already by 1480, a whole range of its varieties appeared, such as: “mechanical” rennen, then “exact” rennen, Bund-rennen, rennen “mixed”, which was also called rennen with a crown spear and, finally, field rennen . All of them had their differences and their own specifics, and the audience understood all this. 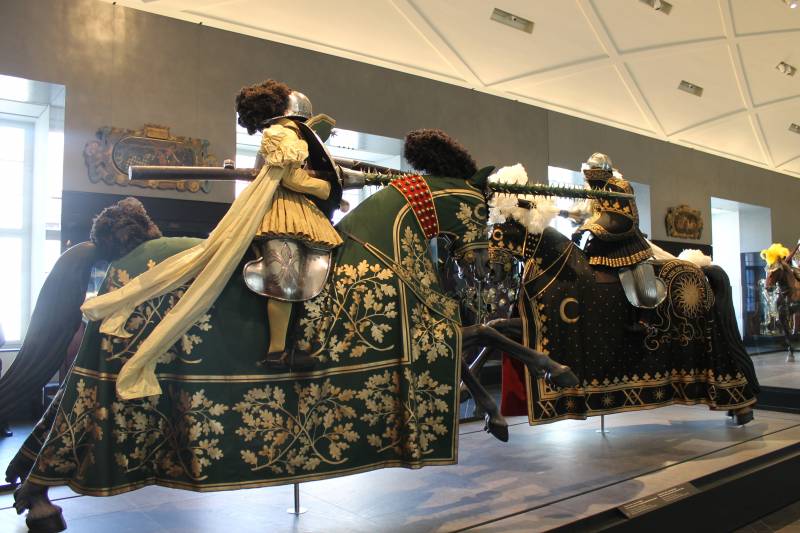 "Hard" rennen. The “hard” rennen differed from the others in that the tarch was screwed (see photo) to the cuirass tightly. You just had to break the spear on the enemy’s tarch and knock him out of the saddle, after which he dropped out of the competition. The horse forehead was "blind." (Dresden armory Ward)

Let's start with the "mechanical" rennen, as the simplest. To participate in this fight knight needed a minimum of armor. That is, a Renzoyg armor without braces and leggings, which replaced the pads attached to the saddle, which were called dildzhe. Sleeves - with puffs. Saddle - no high bow.

In this kind of tournament, too, were two varieties. First: "mechanical" rennen with tar ". The essence of the fight was to get into the tarch, arranged in such a way that the spring mechanism hidden under it threw it into the air. It is clear that all this was done in order to amuse the most respectable audience, it had no other meaning. 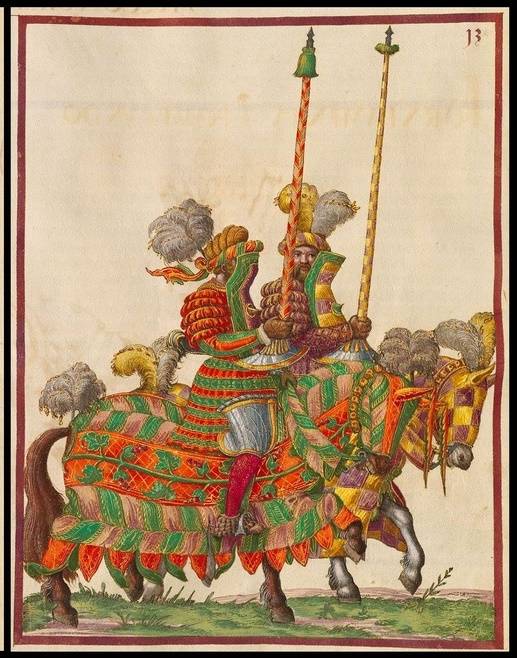 Miniature from the "Art of Athletics" (Volume I and II), manuscript of the mid-XVI century. from the Bavarian State Library. In this treatise of more than 600 pages, more than 120 of color miniatures depicting various types of warfare (Volume I), and in the second volume, types of knightly tournaments. Some scenes are based on real tournaments that have taken place. The miniature depicts the armor for the Bundrennen. It can be clearly seen that no special armor is required for the conquerors, in general, because the target — the tharch attached to the cuirass — is large enough. It is also seen that the face is not protected by anything.

Its type was “mechanical” rented with a breast target. What is the difference, if in any case the goal was a chest tarch? Just in this case, the metal plate fastened on the chest, after the impact of the spear, remained in place, and only the wedges with which it was fixed in the “cocked state” flew out. It was not so spectacular, but safer for the rider. It is important to note that due to the lack of high bows behind, it was not easy to sit in the saddle. And the one who flew out of it along with the target wedges was no longer allowed to the next fights! 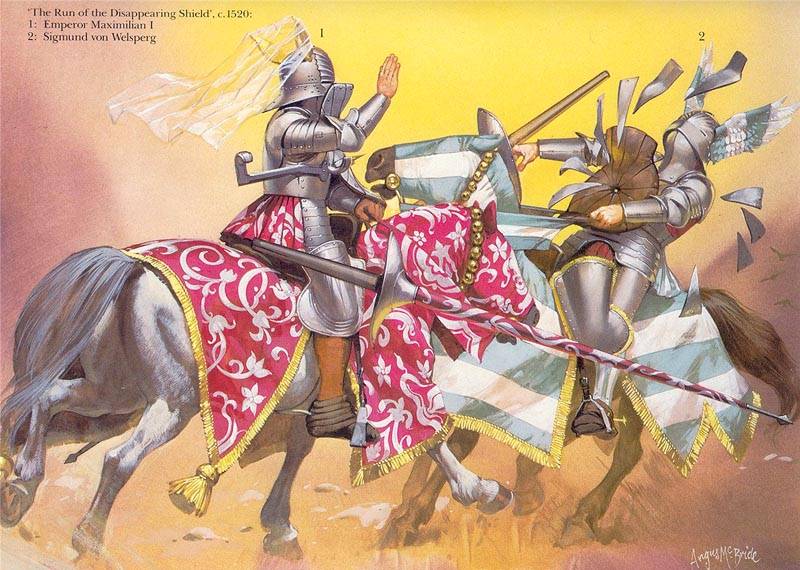 Such a duel with the participation of Emperor Maximilian I, who loved this kind of “fight”, was depicted in his drawing by the English artist Angus McBride.

“Exact” rennen differed from the two previous varieties only in that the tharch, curved outward, was fixed on the cuirass on hooks and it was necessary to strike it in such a way as to knock it out of this mount. At the same time he slid up, covering the face of the enemy, then fell to the ground. There was no particular danger in all this, since the helmet had a chin rest. That is, the touche could not touch your face by any means. The tip of the spear was sharp, otherwise it would not have been possible. That is, it was necessary that he stuck in the tharch, and did not slip on it! 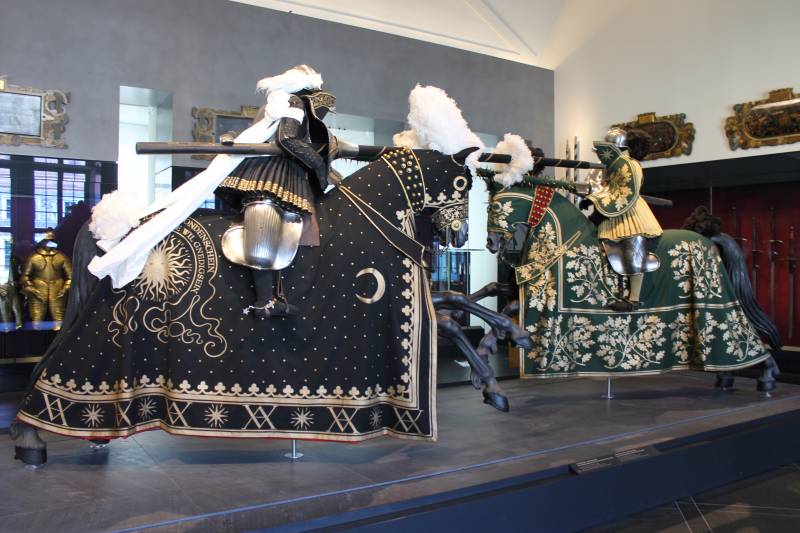 "Hard" rennen. Tarche is attached with a screw with a lamb to the chin, and he himself is rigidly screwed to the cuirass! The figures and costumes are amazing! (Dresden Armory) As you can see, the knights are in fact covered in the most minimal way. But the equipment itself is distinguished by extraordinary pomp. 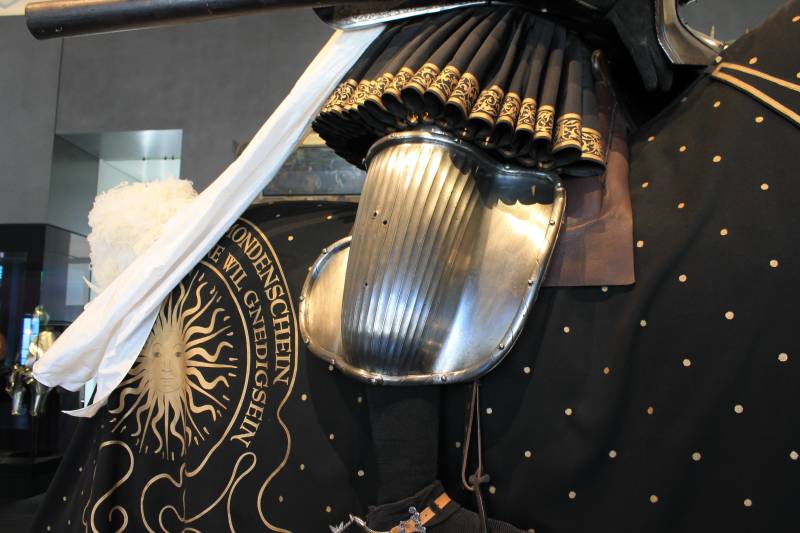 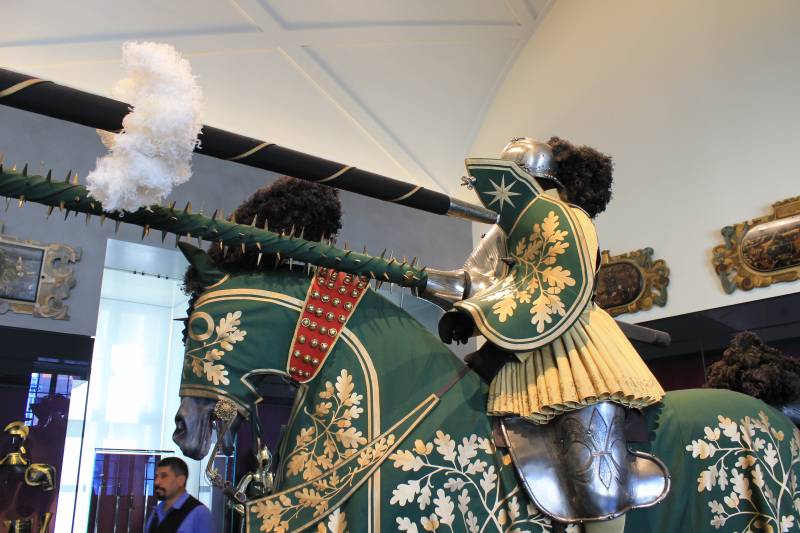 The same group, but from the opposite side. 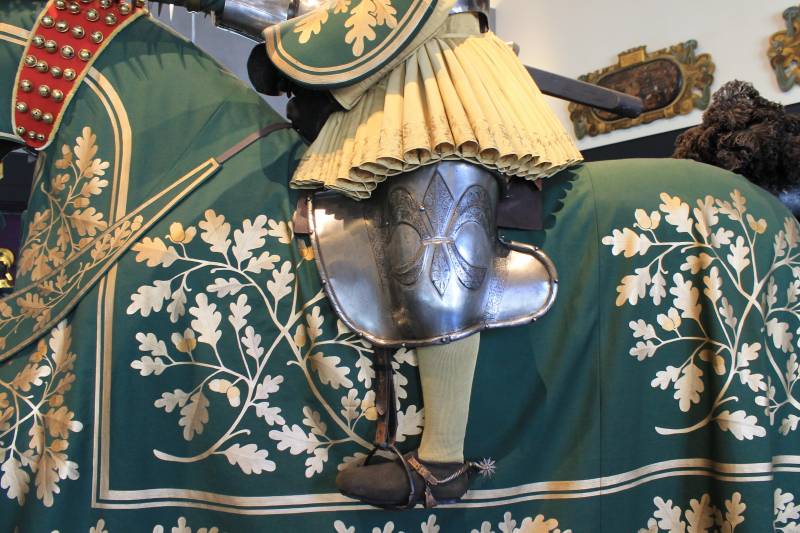 This photo clearly shows the figured tarch and the dilage with a lily, as well as the “skirt”, which was at that time a popular attribute of a knightly costume. But why on the shaft of the spear made the edge, while I can not say. On all previously seen miniatures, the poles of tournament copies are completely smooth. (Dresden Armory) 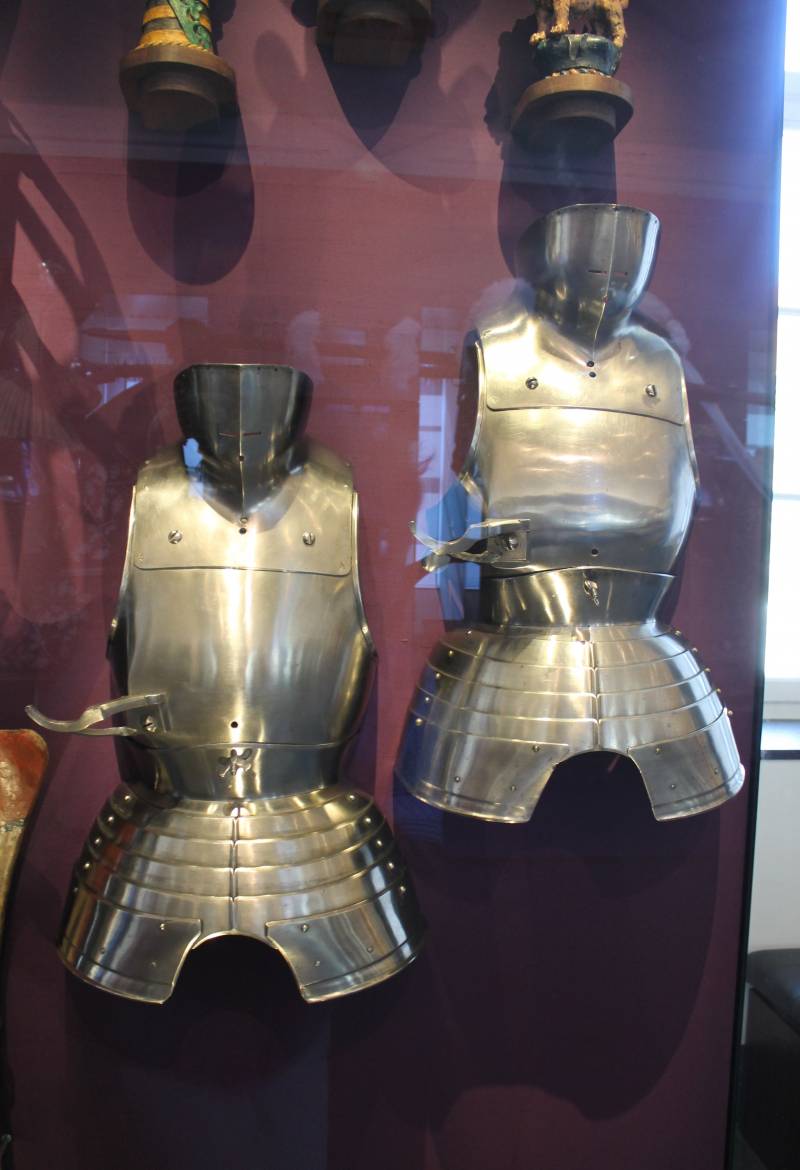 Here such armor for the above types of rennen was quite enough! (Dresden Armory)

The most dangerous type of tournament in Rennen style was Bundrenn, which was different from others because Renntsoy armor for him was equipped with a special breastplate - Bund, under which there was a spring mechanism, which with a successful blow spear threw a high in the air, and he also scattered into pieces. The danger was that the chin in this case is not worn. Only tournament salad. After all, no one was aiming at the head, but only at the tarch, while the “trajectory” of his movement was also known, because he slid along two rails and flew up without touching his face. But ... It was enough to just forget a little and make a head-first movement when shooting the tarch, as it were possible to easily remain without a nose. So this type of duel was considered dangerous for good reason!

In the "mixed" rennen, one knight put on a shtechtsoyg and armed himself with a spear with a crown tip, and his opponent was in a renntsueg and had a spear with a sharp tip. The task - to knock the enemy out of the saddle.

Participating in the “field” rennen, the knight put on armor with leggings and bracers, that is, in practice it was combat armor. The front bows on the saddles are high, but the rear ones are gentle. Horse masks are often deaf, or rather, "blind." The objective of this fight is to break the spears when they hit the tarchi. The duel was of a group nature. In addition to spears, other weapons were permitted, but not often. Sometimes after the first battle with spears, the knights continued the battle, fighting with blunt swords.

During the reign of Emperor Maximilian I, foot fights of opponents armed with spears but fighting through a wooden barrier became fashionable. Spears - fighting, that is, with sharp tips. The armor is also fighting, but only for the torso. The legs are not protected by armor. The goal of the fight was rather strange - to break the enemy’s spear, and in one fight it was allowed to break no more than 5-6 copies. Naturally, the judges carefully followed, so that no one struck below the belt! Sometimes three pairs had mixed weapons - two spears and four swords, or on the contrary - four spears and two swords. 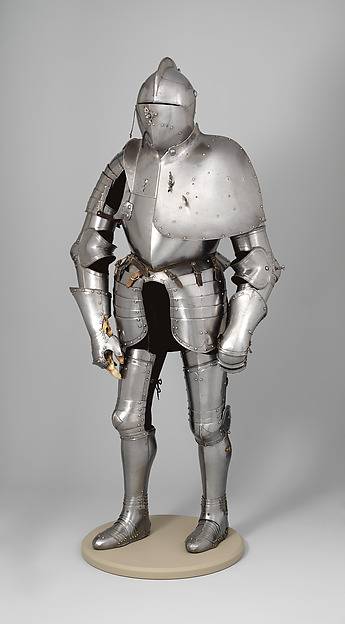 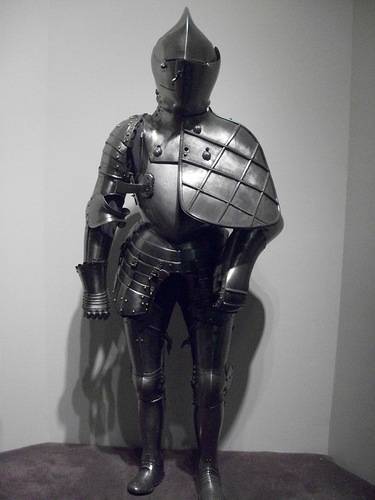 Armor for the "new" Italian duel of the end of the XVI century. from the Higgins Museum, in Worcester, Massachusetts.

The influence of the Italian Renaissance was reflected in the conduct of tournaments. The “German Tournament” went out of fashion and by the middle of the XVI century, tournaments according to Italian rules spread everywhere: “free” tournament or “free” rennen and “fight through the barrier”. For the first used conventional combat armor with a lining on the left shoulder. For the second used armor type shtehtsoyg, but in a lightweight version. A helmet is like an ordinary arm. The left arm and shoulder were now defended by a massive piece, and the gauntlet had a huge bell. One of the features of this equipment was the use, as noted above, of conventional combat armor, but with the reinforcement of the helmet on the left side and the use of shteh-tarcha, which had a surface with a diamond-shaped lattice of metal rods. Why is it needed, because with her the spearhead could not slip off? But just for this, so that the crown tip did not slide on its surface, because so ... “more interesting”! And sometimes this removable tarch was decorated with painting, etching and blackening in the rhombic lattice cells, although the armor itself was smooth and devoid of any decorations. 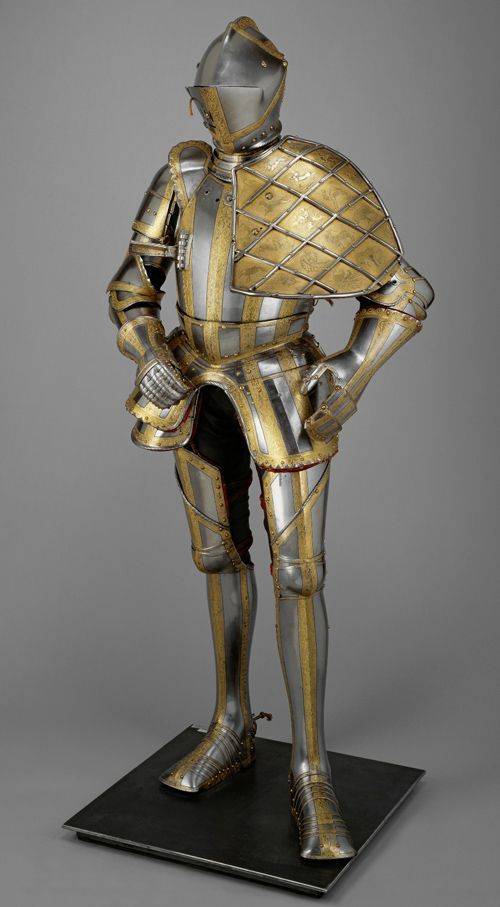 Armor set 1549 of Emperor Maximilian II. (Wallace Collection) Stech-tarch with the bars for the Italian tournament through the barrier. 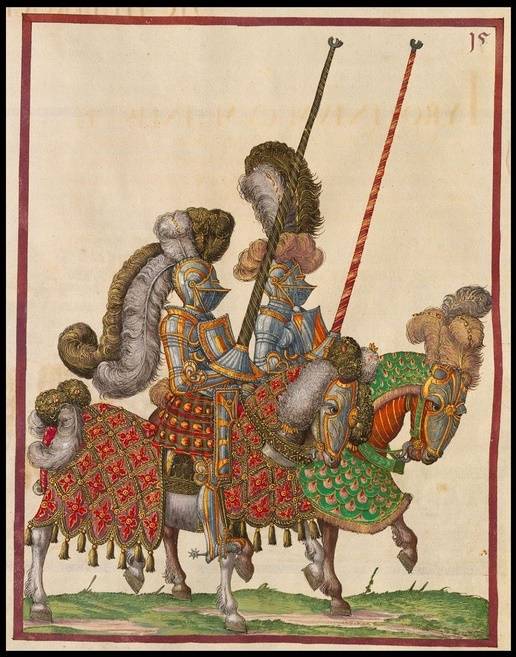 Equipment for the "new" Italian duel through the barrier. From the tournament book of Hans Burgkmayr the Younger. OK. 1554 (the Princely Hohenzollern Museum in Sigmaringen). 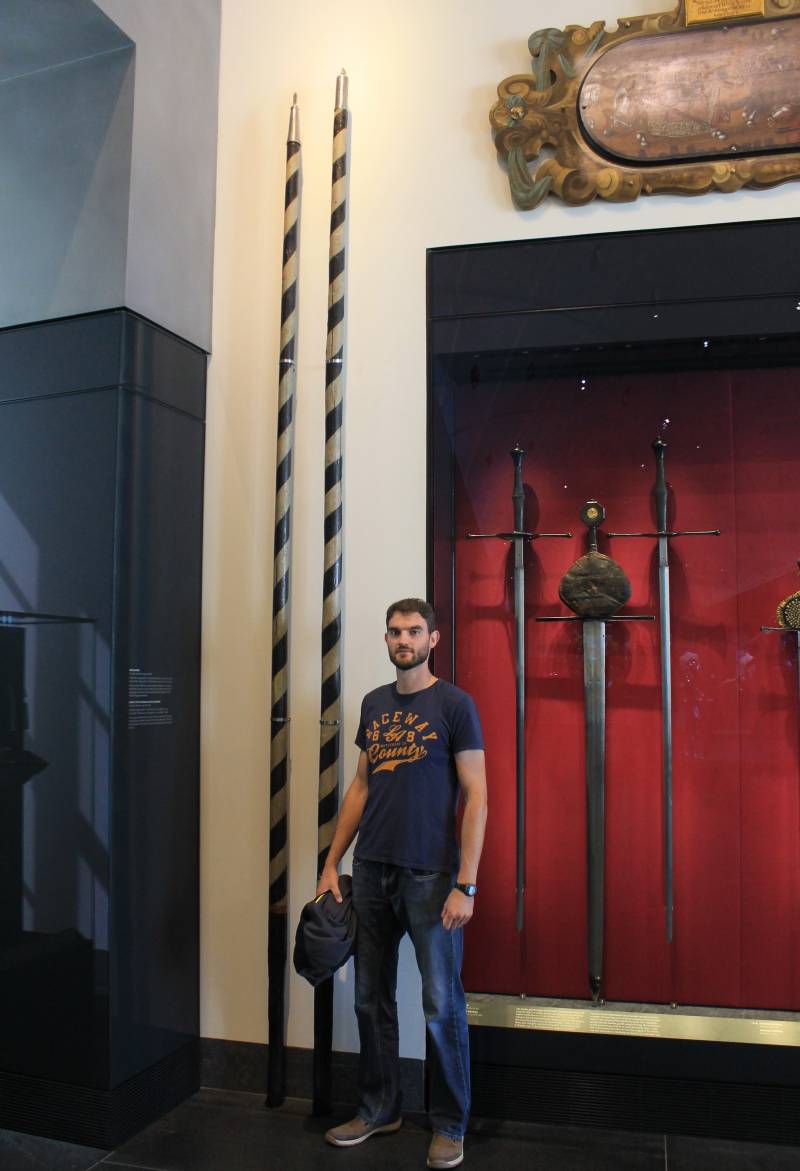 But this is a very interesting photo, with which I can say I was lucky. Photographing a spear is generally difficult - it hurts too long. But even if it succeeds, how to determine their length, if it is not specified? And here was this long German - 192 cm tall, and he agreed to pose for me. Well, and the spear - they are standing behind. On the right in the photo are two identical “swords of war”. They can be called two-handed swords, and often they are called that, but this is not entirely true. These are the swords of the riders, which were required in order to hit the infantryman who fell to the ground, or another rider, using such a sword as a spear. That is why its length mattered. The sword, which is in the middle, with a leather pillow to protect the hand weighs ... 8. 25 kg! Medallions on its top make it possible to attribute it as belonging to Juan of Austria (1547 - 1578), who commanded fleet Holy League at the Battle of Lepanto on October 7, 1571. Such a wide sword could easily chop off a hand in battle or tear down a head. 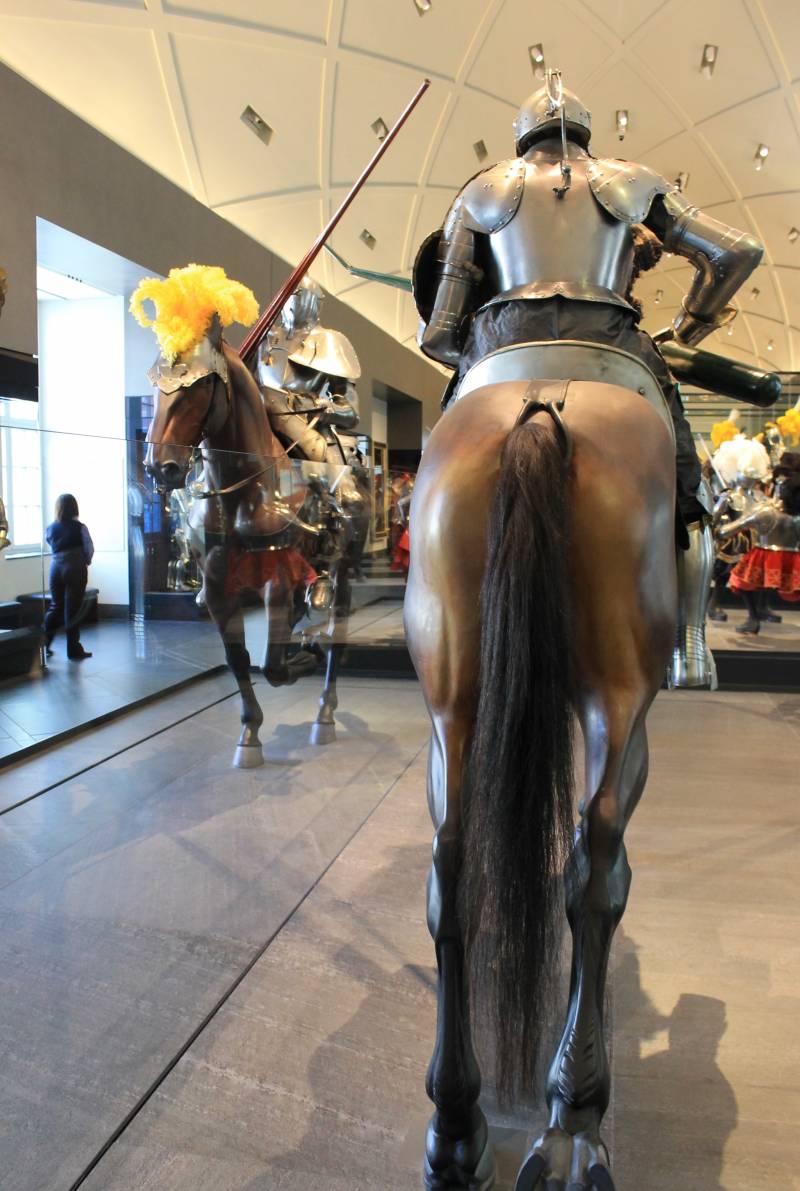 Knights - participants of the "Saxon tournament." The rod attached to the back shell and to the helmet is clearly visible, which gave this “system” rigidity, which was important when the spear was struck and dropped on the ground. (Dresden Armory) 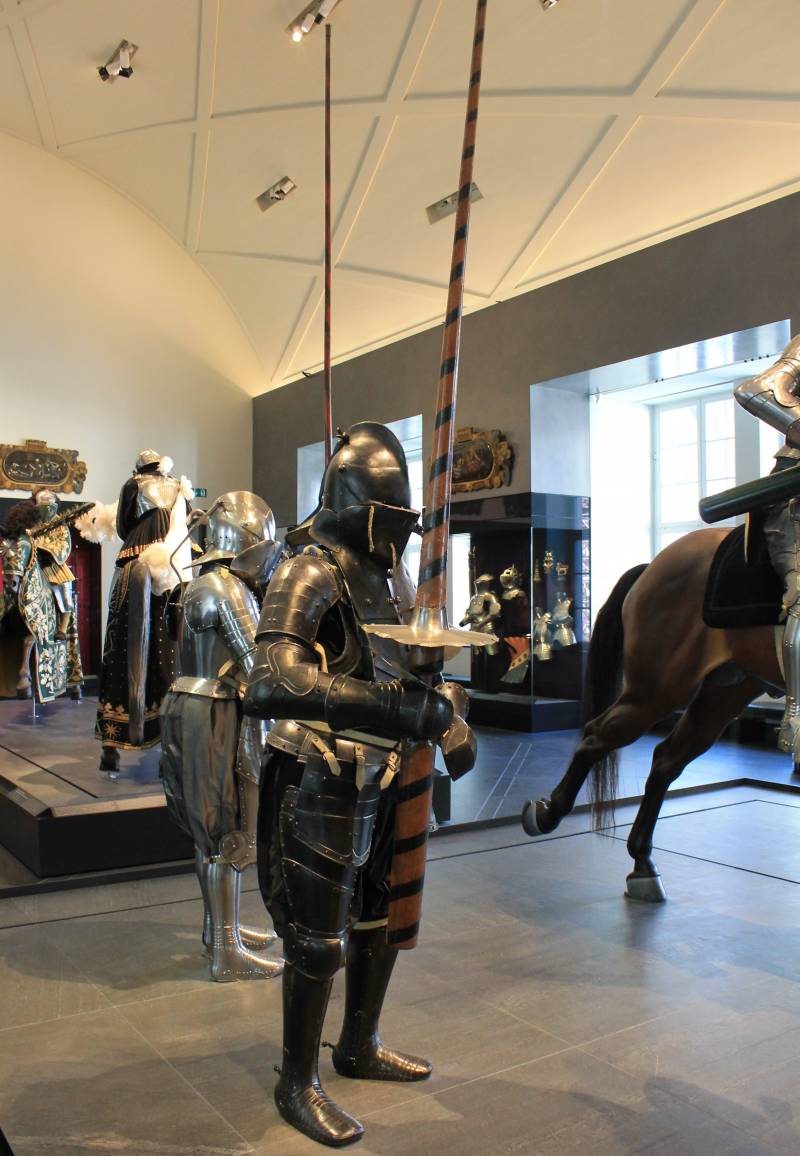 And this is a knight in "Saxon armor." (Dresden Armory)

Tournament competitions ceased in the 16th century, when knightly cavalry lost its role and was ousted by cavalry pistols and infantry from spearmen and musketeers, recruited from citizens and peasants. The formal reason for banning tournaments in France was an accident that occurred in 1559 at a tournament in honor of the conclusion of peace treaties between France and Spain and Savoy, when Count Montgomery fatally wounded King Henry II with a piece of a spear that hit the king in the eye. True, in Germany they continued until the 1600 year, but it was already an “endangered” sport.