Stagnant in evil and pride -
Dreams of fleeting nights
Many have become today.
How many powerful lords
Ruthless, fearless,
Now gone without a trace -
A handful of wind blown dust!
"The Tale of the House of Tyra", trans. I.Lvovoy

The main problem of the Japanese sword is not technical, but purely linguistic. Terms in Japanese. And there are a lot of them. They describe everything, starting from the curvature of the sori blade and its sugato shape and ending with the types of its kissaki edge — fukura-karer (straight) and fukura-tsuku (curved). It is very easy to fall under the magic of all these "scatter" and "hiryu" and only deal with the fact that all of this is listed, borrowing the terms themselves from the book of the same Konstantin Nosov, where every detail of the Japanese sword is painted in an extremely detailed way. However, is it worth it to go so deeply into this topic in an article that is so popular enough in its content? Obviously, both too short material and too long are not too suitable. In one there will be little information even for a non-expert, while the other is only an expert who can read to the end, but he will learn a little from the really new. The most reasonable thing is to give something in between, but this is precisely the most difficult thing when you write about Japanese swords. In the past, the material we met with their main differences from the swords of medieval Europe. Today we continue to delve accordingly history and those and others.

The main part of any sword, including the Japanese one, is its blade, its shape, chord (nagas) dimensions, degree of curvature (dzori), as well as the general shape of the blade (zukuri), and its cross section. The Japanese also noted the shape and size of the edge of the blade (kissaki), the middle point of curvature (sinogi), the width of its surface (sinogi-yi), the characteristic cross section of the rear part (mune), details of the blade surface (yi), for example, valleys and engravings.

Kissaki - the tip of the Japanese sword and the yokot - a well-marked vertical line separating the blade and the tip. Edo Epoch. (Tokyo National Museum) 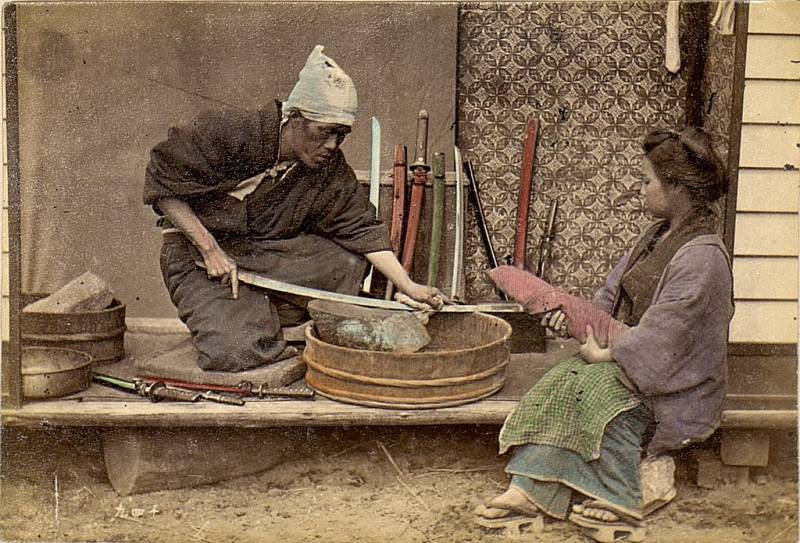 The master polisher is working on finishing the blade. Photo from the library of the University of Vermont. Barlington, USA.

There are two large groups of blades by the presence of stiffeners on them:
• Sinogi-zukuri (with stiffener).
• Hira-zukuri (without stiffener).
In general, it can be said that the Japanese sword is a curved blade with one-sided sharpening, while the European sword is straight and has two blades. Very significant were the differences in the profile of the blade. The European sword traditionally had four edges, and later 10. Moreover, these latter had on a flat middle face and one dale, and even three dale. The simplest Japanese blade had only three faces, and more complex in profile - five, six or even seven faces. Interestingly, the Japanese blade as a whole is thicker and heavier than the European one. The fact is that some katanas at the handle have a thickness of almost 9 mm, and by the yokot (the line dividing the tip and the blade) taper to 6 mm. But the European swords at the handle have 7 mm, and to the point just up to 2 mm. 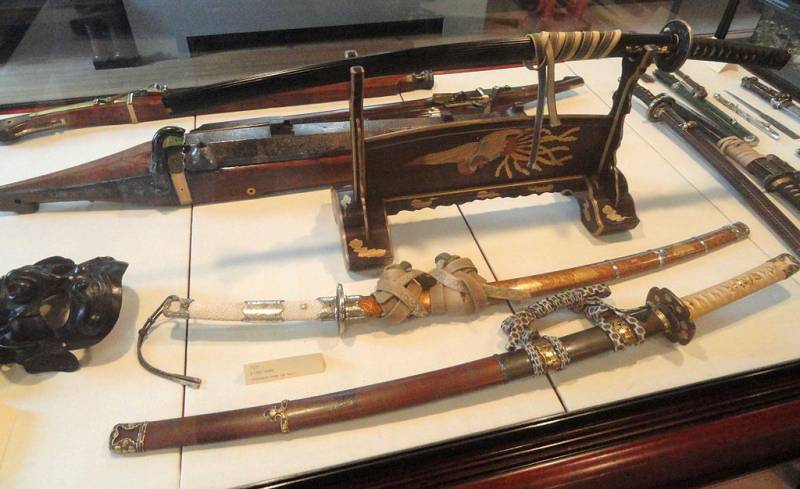 Of course, the shape of the blade, its bending and elongation varied from century to century. However, the Vikings also had single-edged swords, albeit with a straight blade. But how did the swords change in Japan: the swords of the second half of the Heian period (987 - 1185) had blades of length 85 cm, and they were narrow, with a strong bend, and narrowed to the tip. At the beginning of the Kamakura period (1185 - 1231) the width of the blade near the tip was slightly larger than before. But in general, they have not changed much. In the middle of the Kamakura period (1232 - 1287), the width of the blade increased, while at the end of this period (1288 - 1333) the swords acquired wide blades about 90 cm long and a wide and long edge. 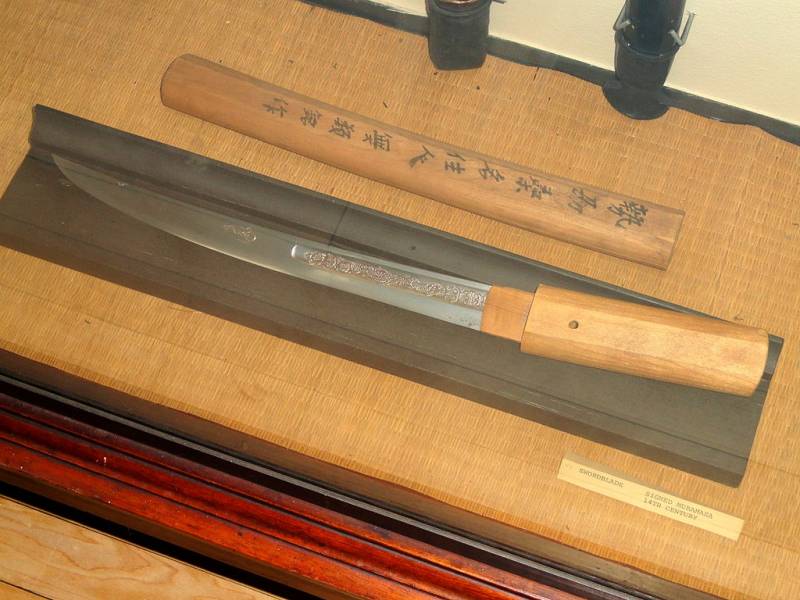 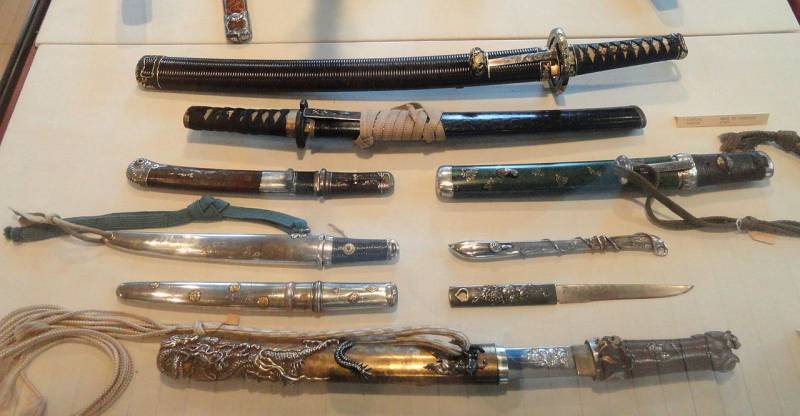 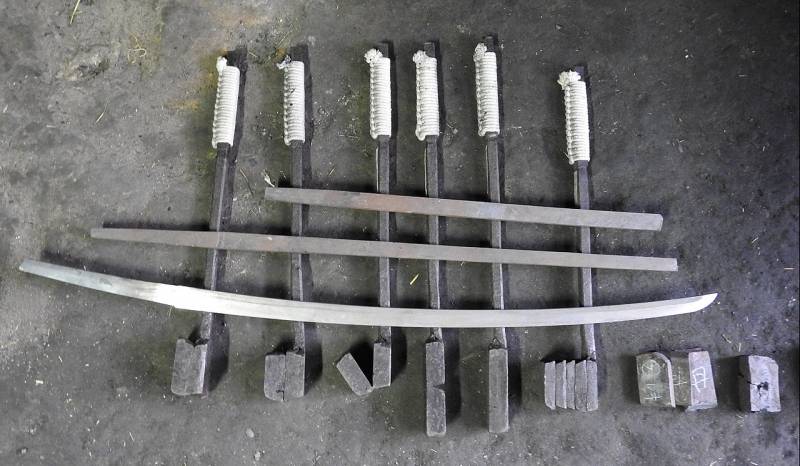 The sequence of manufacturing a Japanese sword - from right to left.

That is, here in Japan we do not encounter divisions in Europe into chopping, slitting, and piercing swords, and all because the Japanese armor itself has not changed much all this time, while the armor of European knights consistently transformed from the "era of chain mail "To the" epoch of mail and plate armor ", and finally - to the" era of white armor. " And according to these changes swords also changed.

And now we note the fact that, although legends about the hardness and sharpness of Japanese swords, as well as about the blacksmith art of Japanese swordsmen, in principle there are no particular differences in the technical process of forging and forging a European blade. Although, of course, from a cultural point of view, making a sword for a Japanese blacksmith was a truly spiritual, almost sacred act. Whereas his European colleague simply did his job, although he probably prayed to the saints to help him. And, of course, he did not fast and did not deny himself carnal pleasures, like the Japanese blacksmith Kaji, and did not put on white priests' vestments. Although, probably, the forge was periodically washed and cleaned. In Japan, this was done to avoid contamination of steel, but was this rule observed in Europe? 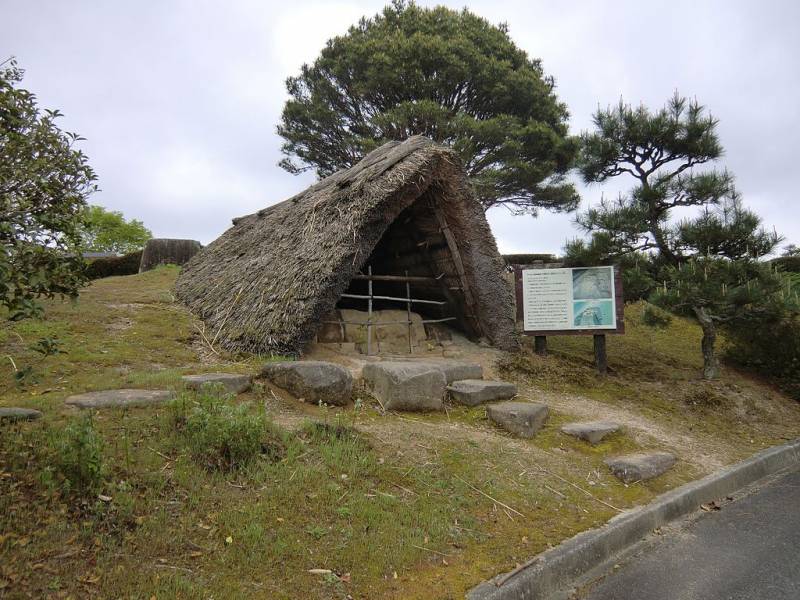 Tartar stove. They looked like this, only without a roof, of course.

Again, the quality of the steel of the sword was determined by its source material. The raw material for nihonto (Japanese sword) was magnetite iron ore and iron sand, mined in different provinces. In the refining furnaces (furnaces of the Tatars) all this was melted down into crude steel. Tatar's furnace is a common cheese-making furnace, and its principle of operation is the same as that of cheese-making furnaces in Europe. From the XVI century, the Japanese began to use iron and steel, brought by Europeans, which greatly facilitated the work of Kaji. Today in Japan there is a single Tatar furnace, in which steel is produced only for traditional swords. 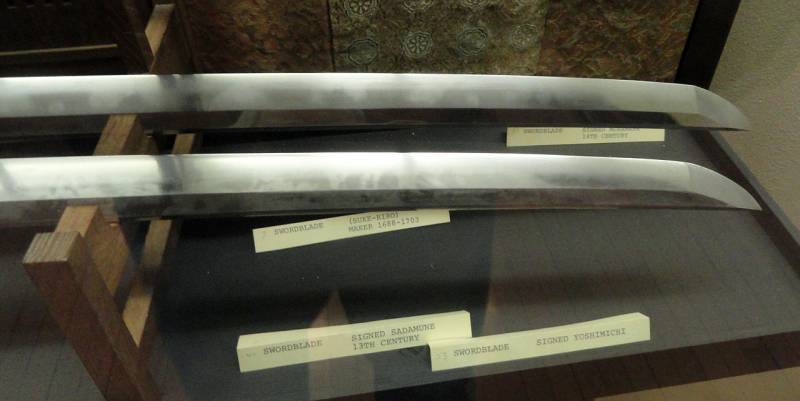 The blade of a Japanese sword usually consists of two parts: a soft core and a hard shell. This package was heated in a flame of pine coal, and then welded with hammer blows. The resulting bar was bent several times along and across, and again and again they were forged, repeating this technique about several times. In the process, both the bag itself and the tools were constantly cleaned in order to obtain very clean steel.

In contrast to European Damascus steel, the essence of the process here is not to weld the various, and in the homogenization of its layers. However, some non-homogenized particles still remain, and it provides the blade with additional viscosity and such amazing patterns on its surface. 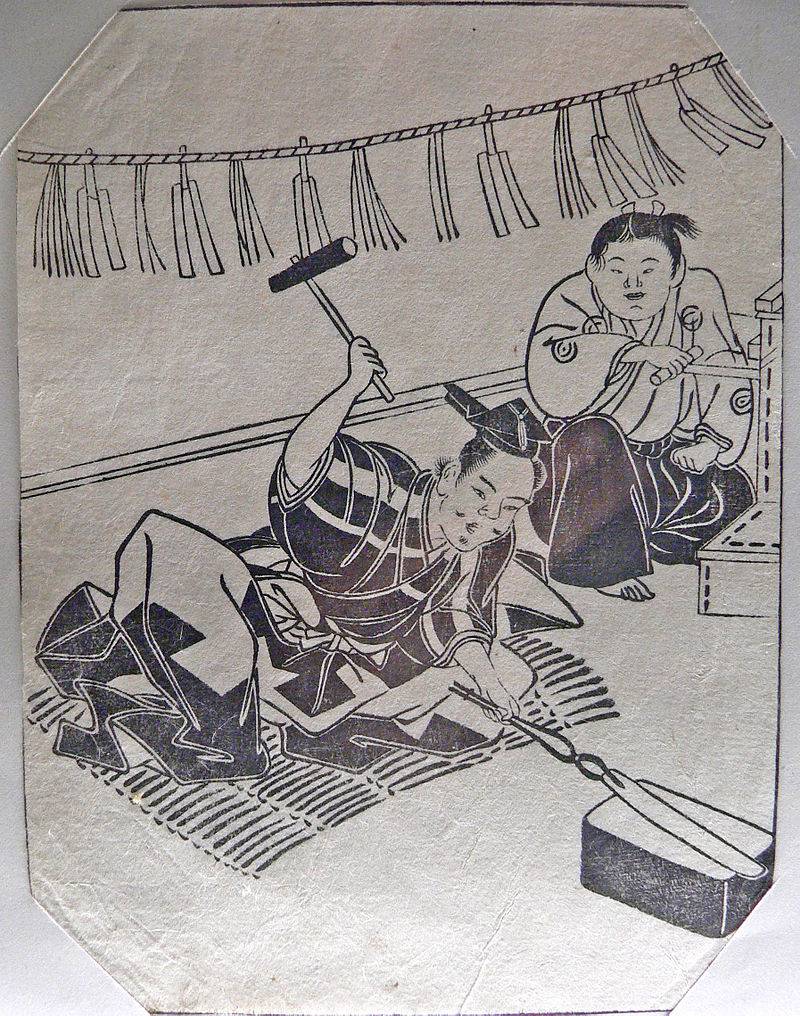 The work of a blacksmith. Illustration from a Japanese Edo book. (Museum of Ethnography in Neuchâtel, Switzerland).

And so it turns out a piece of steel, which consists of thousands of layers firmly interconnected (“shadows” in Japanese terminology). The core prepared for the blade consists of either pure iron or mild steel, which is also pre-folded and forged more than once.

The standard process of forging a sword consisted (and consists!) Of putting the core into a letter-V shell. From this steel rod, a blank for the blade is now forged. Although there are even more complex techniques ...

But the most difficult stage of making a sword was its hardening. And here Japanese technology from European definitely differed. The Japanese finished the blade covered with a mixture of clay, sand and charcoal - of course, each blacksmith had his own recipes for such mixtures and he kept it in strict secrecy. In this case, a thin layer of clay was applied to the blade, while on the sides and butt, on the contrary, it was very thick. When the clay dried, the blade was laid on the fire with the blade down. There were no thermometers at that time, and the blacksmith judged the readiness of the blade for hardening by the color of the glow. Therefore, the forge at this time blacked out. The Japanese chronicles call the color “February or August moon” the best color, but it's hard to imagine if you are not Japanese, who, by the way, distinguish colors very well and know only one green 27 shades! 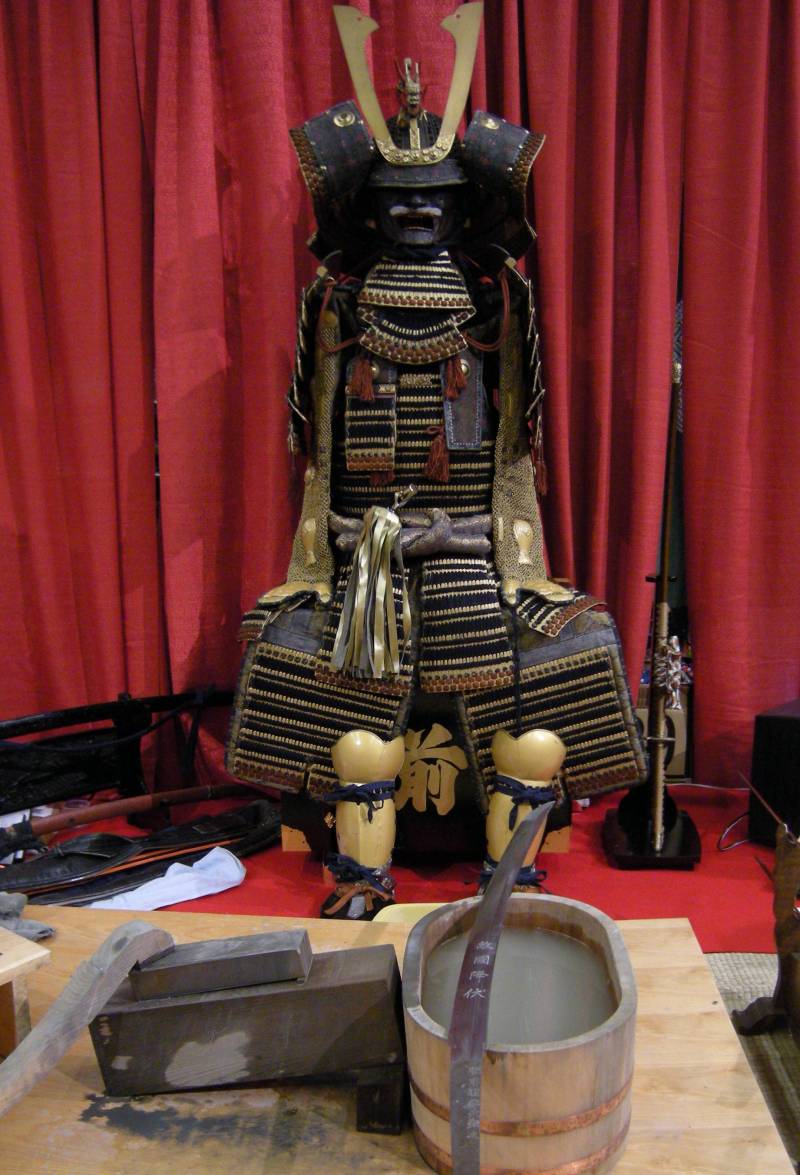 Japanese blades, grinding stones and a tempering bath at the 2008 Festival in Blossom, Seattle, WA.

When the desired glow was reached, the blade was immersed in a container of cold water. The part of the blade that was covered with a thicker layer of clay naturally cooled more slowly in water and was softer than a blade covered with a thin layer. After hardening, the blade was released — it was heated again, but already up to 160 degrees Celsius, and then cooled again sharply, repeating this operation sometimes several times. Now the blade of the sword consisted of a soft core, a much more solid shell and a very solid blade. In Europe, a lot of methods of hardening were known, and including clay coating, but the simplest method “from fire to fire” was the most common.

What did not need to care for the European blacksmiths and what should the Japanese remember? The European sword was symmetrical, so it cooled down evenly. The Japanese had a curvature which, when hardened, could change due to uneven cooling, sometimes up to 13 millimeters. Therefore, it was necessary to foresee in advance how the blade can be bent, and for this it was necessary to have a lot of experience and a “metal feeling”.

After quenching, the blade was thoroughly checked, after which it was subjected to grinding and polishing for almost two weeks, while other masters made a mount for it. Again, there is one caveat: when “sharpening” the blade of a Japanese sword, you need to process its entire surface. Therefore, both sharpening and polishing represent a single process that needs to be carried out consistently, reducing the grain of the grinding stones. As a result, the blade turns out to be both beautiful and sharp, although this technology has a big disadvantage: with each such sharpening, you have to remove quite a lot of steel from the blade, which makes it thinner and thinner each time. Some old swords will be recognized precisely because their core appears from repeated sharpening of them.

There was another very important task for polishing - it was necessary to polish the blade in such a way that it could clearly distinguish various subtleties of blacksmith skill:
• Hamon, that is, the quenching strip, since the more hardened strip had a lighter color of crystalline steel with a clearly visible boundary line, the appearance of which was determined by the black plaster applied by the blacksmith.
• Hada, or grainy patterns appearing on steel.
• Bosi, or the hardening line on the tip.

Ctrl Enter
Noticed oshЫbku Highlight text and press. Ctrl + Enter
We are
Results of the week. “You see, every year my friends and I go to the bathhouse. This is our tradition. ”Reports from the militia of New Russia for 1 September 2014 of the year
184 comments
Information
Dear reader, to leave comments on the publication, you must to register.