Burn yourself, but do not give up the Germans. The terrible story of the castle of suicides

November 23 2017
28
History Pilenai Castle - a feat and tragedy at the same time. His defenders committed suicide, not wanting to surrender to the mercy of the enemy. All property was burned, and then the soldiers who defended Pilenai burned themselves.


The remains of the famous medieval castle, sung in the eponymous opera by Vytautas Klovy, were recently discovered by Lithuanian archaeologists. At the end of the 12th century, German knights - crusaders appeared on the territory of the Baltic. They not only pursued political goals - to subordinate vast lands to their influence, but also sought to convert the local Baltic tribes - Prussians, Kurshes, Zemgals, Samogitians - to Christianity. However, the latter stubbornly refused to accept Catholicism and adhered to their ancestral beliefs. Nevertheless, the Teutonic Order managed to gain a foothold in the Prussian lands and create a military-theocratic state formation. Then the Livonian Order appeared on the lands of Livonia - the Brotherhood of the Knights of Christ of Livonia.

Samogitia, also known as Zhmud, the historical region in the west of modern Lithuania, was located just between the territories of the Teutonic and Livonian Orders. Naturally, the knights dreamed of combining their possessions, at the same time converting the rebellious tribe of the Samogitians to Christianity. Since the XIII century, Samogitia stubbornly defended its independence and ancient faith in battles with the Teutonic and Livonian knights. Even when, in 1254, the founder of the Lithuanian royal dynasty Mindovg, by that time already baptized into Catholicism, gave Zhmud to the Livonian Order, after eleven years, the Samogitians, who came to the aid of the Curonians, were freed from the power of the knights and regained independence. Naturally, the knights were not going to agree with this. The next stage of the longstanding confrontation of the Lithuanian tribe and German knights began.

Caught in the vicinity of Medniki, part of the knights, instead of fighting, began to rob the local population. This was used by the team of Samogitians who attacked the Teutons. In the battle, almost all the knights were destroyed. Marshal Hermann Plock also died. The only knight who survived was Komtur Sambiyski (the governor of the Teutonic Order in Sambia) Gerhard Rude. He was captured and brought to the pagan gods of Samogitia - burned with the horse. But such a defeat did not make the Teutons abandon their aggressive plans for Samogitia - this region was too strategic in the strategic sense, and its capture would allow to combine the order possessions into a single space.

The fate of the defeated Samogitians in the event of being captured was unfortunate. They were faced with a choice - either baptism and the adoption of Christianity, or death. This happened, in particular, after the capture of the Myadwegalis castle in February 1329. Then many defenders of the fortress were taken prisoner, including women and children from the surrounding villages. The Grand Master of the Order gathered to execute all the prisoners, but the Czech King Johan of Luxembourg interceded for them. He was able to convince the master to have mercy on the prisoners if they accepted Christianity. Prisoners agreed to be baptized and then the Crusaders left, freeing them. But, as soon as the Teutons left the borders of Samogitia, the inhabitants of Meadwegalis returned to the religion of their ancestors. 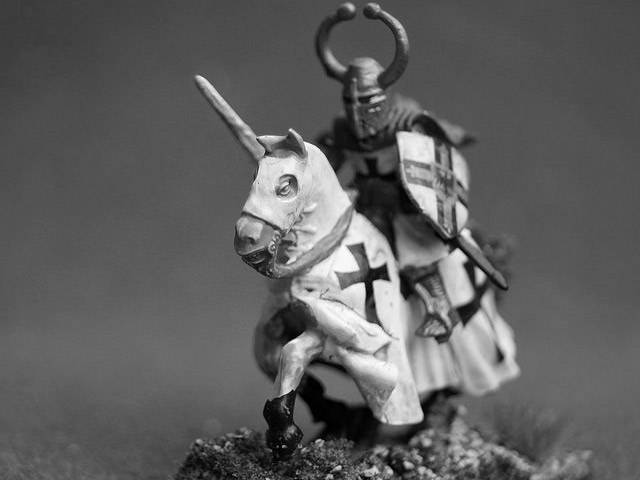 The wars between the German knights and the Samogitas continued for several decades. Lithuanian pagans turned out to be a "tough nut". It was not so easy for knights, with all their organization and military training, to resist the fearless landmarks. By the way, the Samogitians sometimes even made quite successful forays into the lands of the Order. In winter, 1336, the River Neman crossed the forces of the Teutonic Order. So began the next campaign of the German crusaders in Zhemaytiya.

In an effort to become famous as the subjugator of the Samogitians, the Grand Master of the Teutonic Order, Dietrich von Altenburg, in 1336, led another campaign in the Lithuanian lands. This time they prepared for the march thoroughly, so that if you go, then for sure. The Teutonic Order unit included more than 200 experienced and well-armed knights, not only members of the order, but also volunteers from all over Europe, including representatives of the most distinguished German surnames like Margrave Ludwig of Brandenburg, Counts Henneberg and Namur. In addition, with the detachment were a few thousand bollards - ordinary warriors - servants. Such a powerful detachment managed to crush the four thousand strong Litvin troops on the border of the Grand Duchy of Lithuania, after which the knights invaded the Land of Samogitia.

As early as the first half of the 14th century, a whole network of defensive wooden locks was built in Lithuanian lands, which were gradually strengthened by stone fortifications. The main fortifications were built in Samogitia and in the area of ​​the Neman River. 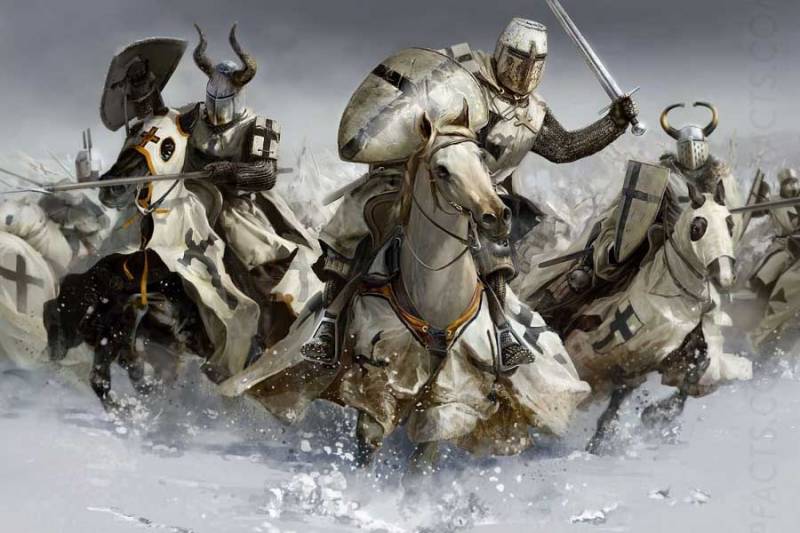 One of the main tasks that the great master Dietrich von Altenburg set before the next campaign was the destruction of the rebellious fortress of Pilenai, built by the Samogitians right on the border with Prussia. This wooden fortress was built on a dais and surrounded by a moat. The existence of the Pilenai fortress was very annoying to the Teutonic knights, especially since it was impossible to reach an agreement with the Prince of Pilen - he did not want to accept Christianity and was not going to recognize the authority of the Teutonic Order.

Repeatedly the Teutonic knights attacked the fortress of Pylenay. In one of them the Teutons killed the Prince of Pile, and his young son Margiris was taken prisoner. The boy was taken to Prussia, where the knights tried to make him forget his homeland. In part, they succeeded. Margiris gradually began to forget his native language, he switched to German. But when he was already a young man, in Marienburg, the princely son accidentally met a prisoner - Samogit, who told him about Samogitia, about his own family. Margiris escaped from the order of captivity and was able to get to the fortress of Pylenay, where by that time his mother ruled. She gladly met her son and gave him the reins of the castle. So, according to the legend, the German knights had another reason to attack Pilenai - to revenge the “traitor” Margiris, in which the Samgoi blood turned out to be stronger than the German upbringing.

25 February 1336, detachments of the Teutonic Order approached the walls of Pilenai Castle. The siege of the fortress began. Unfortunately, there are only sources from the side of the Teutonic Order, which, however, also allow us to assess the scale of the tragedy that unfolded almost seven centuries ago. The chronist and herald of the Teutonic Order of Wiegand of Marburg testifies that about 4000 people gathered in Pilenai Castle. However, most likely there were several hundred people in the fortress. Most of them were women, old people, children, but there were, of course, men, both civilians and warriors. They defended the fortress with joint efforts - they poured boiling water on German bollards climbing the walls, threw stones at them. But the onslaught of the Teutons was too powerful.

Understanding that they would not be able to withstand the siege of the well-trained Teutons for a long time, the defenders of the Pilenai fortress first burned all their belongings - so as not to get the enemy. At this time, the Teutons already crashed the walls with their catapults. Since Pilenay, like other castle in Zemite, was wooden, he had no chance to withstand the siege of the knights. The Samhite priests, so that the Teutons could not force the Samogitians to change their faith by force, called on the defenders of the fortress to collective suicide. 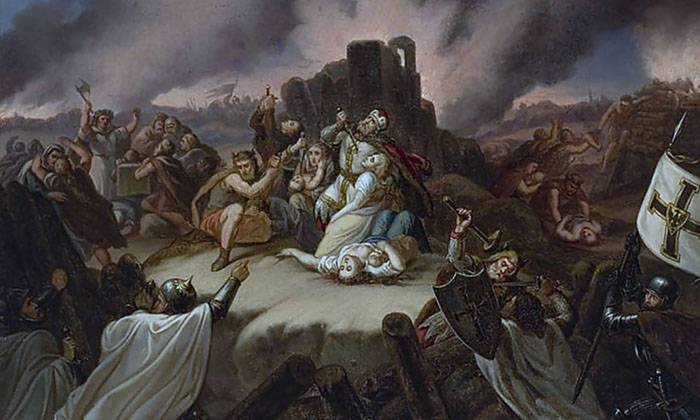 The Crusaders were shocked by the terrible picture of the burning fortress. They had no choice but to even in conversations with each other recognize the incredible fearlessness of the defenders of Pylyonay. According to the German chronicles, the Teutonic knights leveled the pagan fortress with the earth in order to forever bury the memory of the heroic resistance of the Prince of Samgey Margiris and his people.

The Grand Master of the Teutonic Order Dietrich von Altenburg, after the destruction of the fortress of Pilenai, lived for another five years. He led the large-scale construction of order fortifications, the reconstruction of the church in Marienburg. In 1341, von Altenburg, who was about to begin negotiations with Poland, went to Thorn, but fell ill and died along the way. Grand Master was buried in the chapel of St. Anne in Marienburg.

The tragedy of the Pilenai fortress was sung in the folk legends and legends of the Samogitians, but then, after the Samogitians were still baptized, they chose to forget this story. They remembered it already in the XIX century. Then there was the development of the Lithuanian national identity, the emerging identity needed a heroic epic. The role of the epic heroes was ideally suited for the defenders of Piley, who chose a terrible death, rather than surrender and conversion to another's religion. So, the defenders of Sawing after half a millennium became heroes of the Lithuanian national epic. Literary and theatrical works appeared on this mysterious and terrible page in Lithuanian history. Vytautas Klova dedicated to Sawing the famous opera, which in 1957 received the State Prize of the Lithuanian SSR.

In Soviet times, the defense of Pilenaya was seen as a manifestation of the national liberation struggle of the Lithuanian people against the German “knight dogs”. Incidentally, this fit perfectly into the general concept of protecting native land from foreign invaders, and it was possible to draw parallels with the struggle of the Russian state with the Teutonic and Livonian knights. But, given that no documentary evidence, other than a note in the chronicle of Wiegand of Marburg, existed, for a long time there were doubts as to the veracity of the beautiful legend about the defenders of Pylyonay. But, as it turned out, these doubts were in vain - they were dispelled by members of an archaeological expedition who carried out excavations on the territory of historical Samogitia.

In October, 2017, the archaeologists hypothesized that they found the remains of the fortress of Pilenai. According to scientists, she was on the Bilenai mound in Shilal district of Samogitia. In the summer, an American expedition worked there, whose employees discovered a deep cultural layer of the mound. When scientists from the University of Klaipeda, led by Gintautas Zabela, arrived at the excavation site, they confirmed that Pilenai was found.

As a result of archaeological exploration, carried out on an area of ​​14 square meters, it was found that there was indeed a very rich cultural layer in the mound. It was possible to establish that the upper layer belongs to the fortification of the XIV century. Findings were found that allowed us to accurately establish the time period — not only human bones, but also handicraft items, including ceramics, an awl, and a metal clasp. Also, archaeologists were able to establish that the discovered structure was burned. Since this is the first burned-out structure in Samogitia, and only a few mounds with remains of burned grain were found in Lithuania, scientists decided that they were dealing with the remains of a legendary fortress.

Ctrl Enter
Noticed oshЫbku Highlight text and press. Ctrl + Enter
We are
Poltava. The nail in the coffin of the Swedish stateVictory Day of the Russian soldiers of Prince Alexander Nevsky over the German knights on Lake Peipsi
Military Reviewin Yandex News
Military Reviewin Google News
28 comments
Information
Dear reader, to leave comments on the publication, you must to register.