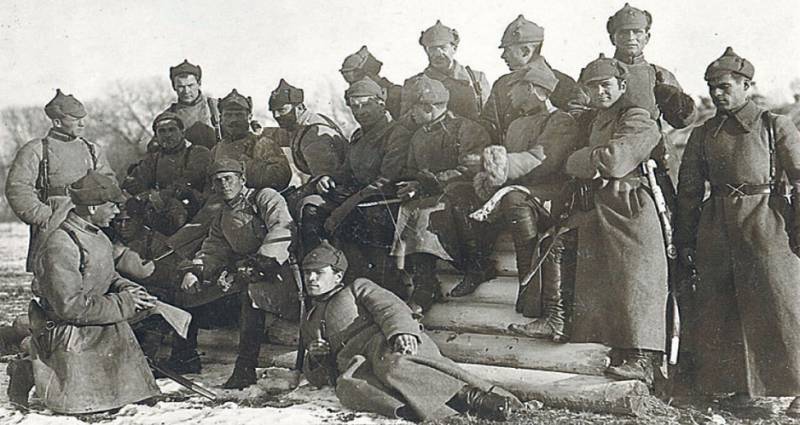 Soviet power, inspired by the ideas of the dissolution of the old army and the creation of a new, on the basis of the universal arming of the people, proceeded to military construction, continued the course of the bourgeois Provisional Government for democratization. As a result, the existing armed forces were completely collapsed, and the quality of the socialist army left much to be desired.

Contrary to the generally accepted principle of unity of command, the military organization of the state was entrusted to a collective body - the Committee on Military and Maritime Affairs, established on October 27 1917 by the decree of the II All-Russian Congress of Soviets. The leadership was started by three people's commissars - V. A. Antonov-Ovseenko, N. V. Krylenko, and P. E. Dybenko. They were in equal position. At the same time, none had sufficient training and experience for such a high level of management. The first was a second lieutenant, the only one of the three with a military education, the second was an ensign, the third was a sailor.

The ink on the decree of the congress did not have time to dry, as the committee almost tripled with the addition of voters at the meetings and renaming the Council of People’s Commissars for Military and Naval Affairs, which was soon transformed into the board of the People’s Commissariat only for military affairs. The sailors, led by sailor Dybenko, were released into free navigation.

Collective management was a bit shaky due to the fact that some members of the collegium did not have the opportunity to participate permanently in its work, a quorum problem arose. Therefore, we decided to consider the meeting eligible in the presence of at least three members. Such a scheme was sustained even when the actual leader turned out to be another people's commissar for military affairs, N. I. Podvoisky, since his three colleagues received other appointments. This is evidenced by some orders of the military department, signed by ordinary members of the collegium, and the People's Commissar himself did not stand out of order, as if emphasizing collective responsibility.

By the beginning of spring of next year, according to historian Sergei Voitkov, the main body of military control was "a variety of projects and opinions: not a commissariat, but a discussion club." There was no agreement among the people's commissioners themselves. One noted low business qualities for the management of the military affairs of the other, he spoke about the illegitimacy of the first, the third generally asked the leadership to remove the board from the cases.

If the polyphonic management was a safety net of the authorities to establish a military dictatorship following the example of the French revolution, the commissioners coped with the task of preventing it. But the defense capability of a country in a state of war was further weakened by the decentralization of economic management, the policy of reducing military production and the transition of industry to the output of peacetime products. The old army collapsed completely, and the Red was in a state of becoming.

At the beginning of work, the Second Congress of Soviets outlined the task of the armed forces, calling on soldiers in the trenches to be vigilant and steadfast, expressed confidence in the ability of the army to defend the revolution from the encroachments of imperialism until the new government achieved a democratic peace. Responsibility for the preservation of the revolutionary order and the strength of the front was assigned to the temporary revolutionary committees created by the troops. 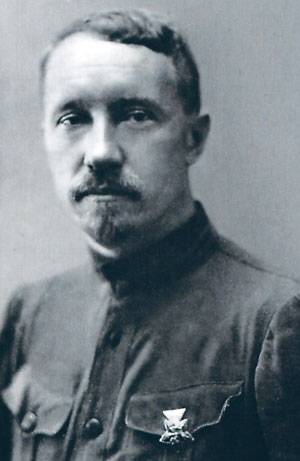 But in the development of the democratic process, the congress takes other decisions that cannot be called anything other than decomposing military discipline. The death penalty on the front is abolished, freedom of agitation is restored. The final collapse of the army accelerated the actions of the executive. Chairman of the Council of People's Commissars V.I. Lenin, the People’s Commissar for Military Affairs and the Supreme Commander Krylenko, in the name of the Government of the Russian Republic, hand over the cause of peace to the soldiers and give the right to military units in direct contact with the enemy to choose who is authorized to enter into negotiations for an armistice .

In the soldier’s mind, already living at the earliest possible end of the war, the idea was strengthened that the question could be considered solved. Army everyday life turns into an endless series of fraternizations, rallies, congresses, polls and resolutions giving rise to initiatives from below, including the arbitrary demobilization, which is more properly called desertion. There was not enough time and discipline even to maintain in the proper order the previously equipped positions and on combat training.

In mid-December, the Council of People's Commissars issued two decrees, on the basis of which all military personnel - from the corporal to the general - were equalized in rights and received the title of a soldier of the revolutionary army, the insignia and awards were canceled. All power in the units and connections passed to the soldiers' committees and councils, and the commanding staff was subject to elections.

According to the Chief of Staff of the Supreme Commander M. D. Bonch-Bruyevich, a general who went over to the side of the new government one of the first, the electoral document terrified him, he, in his words, finished off those pitiful remnants of combat capability, which are still thanks to the amazing properties of the Russian soldier were at the front of the troops. The only thing left for the chief of staff was to write reports to the government, from which it can be seen how rapidly the army began to decompose.

Lenin’s report on the work done at the III All-Russian Congress of Soviets 11 in January 1918 of the year in which the leader said: “The old army, the army of barracks, torture of soldiers, is a thing of the past. It is scrapped and there is no stone left on it. The army was fully democratized. ” For applause, the deputies either forgot that the previous congress addressed the soldiers with the task of vigilance and organization, or did not realize that in such a state the army was no longer able to ensure the strength of the front.

And in the military leadership, the desire for the collapse of the old and the fear of the emergence of a new counterrevolutionary leader prevailed over responsibility for the condition of the troops. Therefore, Krylenko did not accept the proposal of the Chief of Staff to form the most combat-ready units from the remnants of the army in case of an enemy attack. 25 January, he goes further and gives the order on the order of disbandment of the rate. Then, having exceeded his authority and not waiting for the conclusion of peace with Germany, after the breakdown of the negotiation process, he declares about the end of the war, the coming peace and authorizes demobilization. This decision provoked an angry reaction from Antonov-Ovseenko, but the telegram from the chairman of the Council of People's Commissars on the cancellation of the order of the Chief Chief Executive Officer was late.

Green light was given to the enemy. The existing armed force — the remnants of the old and the beginnings of the Red Army — did not withstand the renewed advance of the German forces, which led to the conclusion of peace on conditions that were more demanding than previously thought and degrading for Russia. The former enthusiasm was replaced by irritation, which is noticeable in Lenin's article “A Hard, but Necessary Lesson.” The leader writes about the refusal of the regiments to defend their positions, their flight and chaos, the failure to comply with orders. He reproaches the leaders that the victories in the struggle against the counter-revolution were dizzy and a gigantic disintegration of the army was allowed.

Tried, did not work

A bold recognition of the leader required decisive action for a radical change in the situation. The first decision was the creation in early March 1918 of the body of the strategic management of the army - the Supreme Military Council. A course is being taken for the broad involvement of generals and officers, the refusal to recruit troops on a voluntary basis. The results of the construction of the regular army did not appear immediately - the democratic freemen did not want to retreat and, unfortunately, not everyone, even in the highest echelon of the military power, heeded the changes.

The well-armed detachments of sailors headed by the People’s Commissar for Maritime Affairs Dybenko, who were carrying out the task in the Narva region, ignored the demand of the section of the former former lieutenant-general D. P. Parsky appointed by the defense chief and left the front line without permission. Then, removed from office, the People's Commissar, who was under investigation, got out of control of the central government, left Moscow without permission, and, together with a detachment of sailors, showed the people an example of anarchy, insubordination and opposition.

Difficult to build a military one of the achievements of democracy - the politicization of the army and the multi-party system. A disastrous example was given by the left SR and the former lieutenant colonel M.A. Muravyov, who, being commander of the Eastern Front, organized an insurrection in July 1918, which led to the weakening of the troops and subsequently the loss of a number of cities, including Kazan with gold reserves in Russia.

In connection with this treachery, the positions of opponents of recruiting “former” soldiers into the army strengthened. The ultra-revolutionaries were in favor of electing officers, guerrilla warfare, giving party organizations control over the entire work of the army, demanding that the greetings of the commanders of the Red Army be canceled. The question arose so acutely that it was submitted to the Eighth Congress of the RCP (B), held in March 1919, for consideration. Everything. what could be said about the Red Army in its initial state and impartial for those who created it is expressed in the words of I. V. Stalin: “Half a year ago we had a new army, after the collapse of the old, the Tsarist, it was voluntary, poorly organized, with collective management, not always obeying orders. This was the period when the attack was marked by the Entente. The composition of the army was mainly, if not exclusively, a worker. Due to the lack of discipline in this volunteer army, due to the fact that orders were not always executed, due to the disorganization in the administration of the army, we were defeated. ”

Despite serious mistakes at the beginning of military construction, the government acted with the first people's commissars quite democratically. Perhaps, she understood her responsibility for what happened. At the same congress, Lenin will say: "We tried to create a volunteer army, groping ..."

Everything was limited by the fact that a new governing body was appointed over the board of the People's Commissariat for Military Affairs. Disagreeing with this Krylenko resigned, became a member of the board of the People's Commissariat of Justice and was looking for a former colleague Dybenko to bring to justice. He suffered more than anyone else - although he was acquitted, but he was expelled from the party. Antonov-Ovseenko continued the struggle against internal counterrevolution, and Podvoisky became a member of the Supreme Military Council.

Ctrl Enter
Noticed oshЫbku Highlight text and press. Ctrl + Enter
We are
Black October 1993. Twenty-two years to shoot the House of SovietsThe development of the military-industrial complex of the Russian Empire in the years of WWI
Military Reviewin Yandex News
Military Reviewin Google News
27 comments
Information
Dear reader, to leave comments on the publication, you must to register.