November 23 2017
13
In the United States, a list of countries that, according to the American authorities, are sponsors of terrorism, was published the day before. The list is surprisingly short. And yet, it may be much more surprising that the list can be viewed both from the top upwards and from the bottom upwards, but in any case the United States of America itself does not reveal it ...


So, whom did the most exclusive and special nation on Earth write to the financiers and accomplices of international terrorist organizations?

In the first place in the American "black" list - the DPRK. You can scratch your forehead or the back of your head for a long time in perplexity, but it’s definitely not exactly what kind of perspective Kim Jong-un supports international terrorism. The American "partners" are trying to explain by what criteria North Korea got into the new American list, and it was also in the first place.

The explanation is divided into two parts, the first of which is as follows:
North Korean intelligence agencies are involved in the murder of Kim Jong-un's half brother in Kuala Lumpur, the Malaysian capital.

In any case, it simply captures the spirit of the care of the United States towards the fate of the relatives of the North Korean leader. It is strange that the list of North Korea’s "deadly sins" does not contain statements about how Kim Jong-un "shot an uncle, aunt of her great-nephew and her whole family before the nth knee, from the residence’s personal backyard yard, then fed the remains to dogs that I later ate myself at dinner. ”

That would be a powerful report for CNN ...

The second part of the “evidence” that North Korea is the “main sponsor of international terrorism” is represented as follows:
North Korean hackers conducted several cyber attacks that caused serious damage. These acts are rated as terrorist acts.
Already "a few!" Yeah. These are not some Jordanian or Saudi emissary militants who planned and carried out terrorist attacks against hundreds of Russian citizens. Well this is much worse, because the mechanism of setting the pins in the bowling club in 500 m from the Pentagon was hacked ...

Well, as you understand, it’s impossible to ask the exclusive nation about the evidence that it was North Korean hackers who did the damage - for anyone who takes an interest risks automatically to be on the list of dirty and near henchmen of the totalitarian North Korean regime. It is said that the damage was caused by North Korean hackers means to take it on faith or hack on the nose.

That is, according to American logic, if a hacker acts in any country in the vast expanses of Internet, causing damage to someone’s material or moral plan, then the country in whose territory he is located must be immediately listed among the sponsors of international terrorist groups. Well, right? ..

The US Treasury immediately declared that after the publication of the list in which the DPRK was named sponsor of terrorism, new sanctions packages would be introduced: for example, blocking accounts in banks where North Korean accounts may show up, as well as a possible revocation of the “general license” for these banks (if they carry out dollar transactions; after all, they carry them out ...).

Now, friends, tell me, please, I can’t remember something when the US Treasury introduced at least one tiddly sanction against banks through which funds went straight or through the thorns to the accounts of the ISIS leaders (* it is forbidden in Russia), are the same banks. That really can not remember. A dozen times in the UN Security Council, Russia called on “partners” and “friends of Syria” to deliver the most effective blow to an international terrorist group: simply “ban” affiliate accounts and give banks to the banks that serve them. Russia was even ready to suggest which Western and Middle Eastern financial structures, millions of dollars went to terrorists as "fraternal" assistance, and through which structures the terrorists received funds from the sale of oil. But, here's the bad luck, the money continued to walk between bank accounts, they continued to buy on them weapon at the countries of NATO, automobile equipment at the famous Japanese manufacturer - and the full sanctions calm. Panamanian dossier saw everything. And there is no igilovsky dossier. Strange ...

Another thing is the DPRK ... These are precisely the vile and bloody sponsors of terrorism, ruthlessly cracking down on their stepbrother ... And because of this, the brutal grin of Pyongyang must certainly be crushed by sanctions.

By the way, the DPRK was previously in the list of "sponsors". In 2008, it was crossed out from there in order not to make people laugh. And now Donald, the “Russian agent,” Trump, who is not his own, of course, by will, but under pressure from Congress and not otherwise, signs the document that the DPRK should be returned to the list. Return to where the other "sponsors of global terror" - Iran, Syria and Sudan. Everywhere there are “bloody regimes”, and in Sudan in addition also история stay in this country of osama bin laden. Oh God! Bin Laden himself, who wherever he lived, ranged from Saudi Arabia to Pakistan, where, as the Americans themselves had said, sent US special forces to the Gurias. But neither Saudi Arabia nor Pakistan will be seen in the list of countries sponsoring terrorism. Nor are there those who spawned Dzhebhat an-Nusru (* banned in the Russian Federation), Al-Qaida (*) and other Taliban (*). But Pyongyang with Damascus are available. With Damascus !!! who drank from an international terrorist so much that no censorship words can not describe.

It is necessary to offer Washington, with its list of countries “accomplices of international terrorism,” to be nominated for the “Spongy cranberry of the year” award. Victory by a large margin provided. 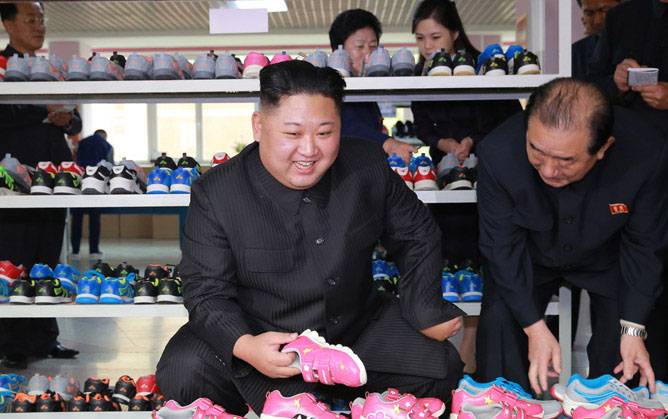 Meanwhile, Kim Jong-un visited the factory for the production of children's sneakers ... Unheard of terrorist activity!