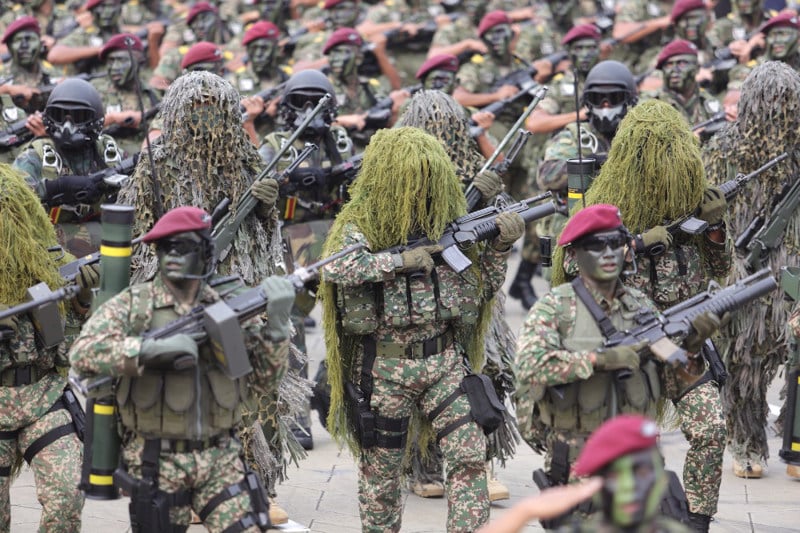 Malaysia and Brunei combine geography and oil as their main source of revenue. And they have one common enemy for two, or rather, a rival.

Malaysia consists of two isolated parts - on the Malacca Peninsula and on Kalimantan. This is a monarchy. Possessing significant oil reserves, the country has built up sufficiently powerful forces on export revenues and is trying to build its own military-industrial complex. Earlier weapon It was acquired mainly in the USA and Great Britain, but now purchases are diversified. Among suppliers is Russia, as well as Brazil, China, Korea, Turkey, South Africa, and European countries.

Under the wings of the MiG and Su

The air force has three air divisions - 1, 2 and training.

In naval aviation: 6 English anti-submarine helicopters "Super Lynx" and 6 French multipurpose AS555. The naval police aircraft include the 3 French helicopter AS365 and 3 of the Italian AW139, as well as the 2 Canadian patrol aircraft CL-415МР. The composition of the Navy includes a regiment of marine special forces.

The microscopic state of Brunei on Kalimantan Island gained independence from the UK in 1984. Bordering only Malaysia and entering ASEAN, militarily, the sultanate continues to focus on the former metropolis. Due to its considerable oil reserves, the country has large financial resources, but due to the small population it is unable to create serious aircraft.

The ground forces include the 3 infantry battalion and one support (as part of the engineering and reconnaissance squadrons). The Light Infantry Battalion and the Gurkha 2 Battalion are considered reserve.

Armed with 16 English light tanks "Scorpion", 37 French armored personnel carriers VAB-VTT and 8 auxiliary machines based on them, 24 English mortar L16. The air force consists of 4 squadrons, but do not have combat aircraft. Conventionally, the 1 base patrol of the CN-235M of Indonesian production can be considered as such. There are up to 4 Swiss PC-7 training aircraft and more 40 helicopters (1 Bell-214, up to 6 Bell-206, up to 12 Bell-212, up to 18 S-70, up to 7 B-105). The Air Force includes 3 passenger liners (European A340, American Boeing 747 and Boeing 767), intended for the transportation of the Sultan and his family. Ground defense includes the 12 English Rapira air defense missile systems and 72 French Mistral MANPADS.

The Navy has 4 rocket (like Darussalam), 7 sentry (4 Itjihad, 3 Pervira), 24 patrol and 4 amphibious boats.
The contingents of Great Britain (Gurkha battalion, 3 helicopter) and Singapore (training units, AS332 helicopters) are stationed in Brunei.

Both Malaysia and Brunei are involved in a dispute with China over the Spratly Islands, but are obviously incapable of resisting the PLA, so they will have to either negotiate with Beijing or surrender. Of course, they tend to the first option. A close relationship with the United States and even more so with the UK does not guarantee protection from China at all. Anglo-Saxons would never even die in distant Asian countries.

Ctrl Enter
Noticed oshЫbku Highlight text and press. Ctrl + Enter
We are
Special Operations Forces: Anytime, Anywhere! Part of 1Situational analysis of the death of the MH17 flight (Malaysian Boeing 777), made on the basis of engineering analysis from 15.08.2014
Military Reviewin Yandex News
Military Reviewin Google News
20 comments
Information
Dear reader, to leave comments on the publication, you must to register.