November 22 2017
37
A prospective foreign customer has been found for a promising US Marine Corps helicopter. According to the portal defencetalk.com, the company Lockheed Martin held the first demonstration of the helicopter CH-53K for the armed forces of Israel.


The CH-53K King Stallion helicopter is a continuation of the CH-53 lineup, which has been produced since 1964. The new modification is the largest in the “Stallions” family (from the English stallion - stallion), to date, four pre-production prototypes of the CH-53K have been assembled, which have passed a series of tests and were transferred to the US Marine Corps. 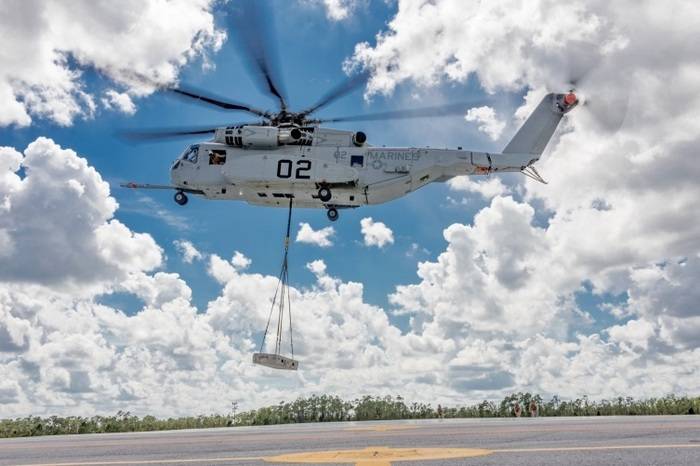 The Israeli Air Force has repeatedly shown interest in the new model in the CH-53 heavy helicopter lineup and even canceled the planned purchase of Bell Boeing V-22 Osprey converters. Brigadier General of the Israel Defense Forces Nir Ning-Nun made an 90-minute flight on the new “Stallion”, during which representatives of Lockheed Martin showed the key capabilities of the new helicopter.

CH-53K King Stallion is a heavy transport helicopter with a maximum take-off weight of about 40 tons. The machine can carry over 12 tons of cargo on an external sling, and its cargo hold can accommodate up to 55 passengers. The crew of the helicopter is from two to five people - in addition to the two pilots, it can include three shooters that provide all-round protection.

The maximum flight range of the CH-53K is 840 km, the speed is 315 km / h. The helicopter is equipped with active and passive protection systems - in particular, the armored hull protects the crew and passengers from small-arms fire weapons, and active protection systems can protect the machine from damage by missiles. In total for the American marines are planning to buy about two hundred of these machines. transmits "Warspot"