Venezuela before the "default". Will the Russians save her?

November 23 2017
18
How much is Venezuela today? Vulture investors who specialize in distressed debt are already circling the country. Moscow gave the go-ahead for the restructuring of the state debt of Venezuela, but this is unlikely to save the Maduro government. 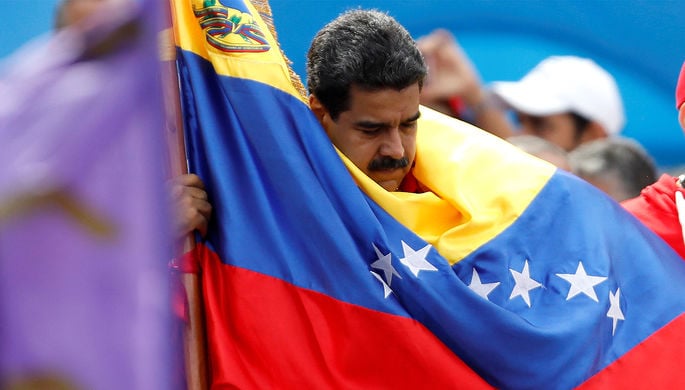 The intergovernmental protocol signed a week ago provides for the restructuring of the Russian debt of Venezuela within ten years. "Oil Socialism" in the republic has long been experiencing difficult times. At the same time, international lenders are putting pressure on the country: if it were not for the friendly step of Moscow, today one could speak of a partial default. However, a “selective default”, as he was christened in the press, will take place anyway: Venezuela owes too much, and 3,15 billion dollars of consolidated debt “temporarily donated” to the republic by Russia will in no way save the situation, let payments and stretch over ten years with minimum payouts in the first six years. “Relief of the debt burden provided to the republic as a result of debt restructuring will allow to allocate the released funds for the development of the country's economy, improve the debtor’s solvency, increase the creditors’ chances of returning loans previously granted to Venezuela ”, noted in the message of the Ministry of Finance of the Russian Federation.

Russia itself insured as follows: by some estimates, in the 5 Venezuelan oil projects from Rosneft at 40% stake. Soon such projects will allegedly be 14. According to the same estimates, Rosneft receives about 220.000 barrels of oil per day from Venezuela, or about 8,8 million dollars a day (for example, 3,212 billion dollars a year, and this is only forty dollars per barrel).

Venezuela today suffers from two “dependencies” at the same time: first, large public debts, which grew very quickly against the background of low oil prices; secondly, US sanctions that naturally stifle its economy.

The Russian delay, albeit a long one, is unlikely to have a positive effect on the overall situation. Judge for yourself.

The signed agreement on debt restructuring of Venezuela to Russia, which was recently announced Interfax, determines the term of restructuring in ten years, which is the standard conditions for such agreements.

Russia is one of the major lenders of Venezuela. Here are a few examples: in 2011, Moscow provided Caracas with a cash loan of up to 4 billion to finance the supply of Russian industrial products. Later, there were difficulties in repaying the debt: in the crisis year of 2014, when oil prices collapsed, Venezuela asked the Kremlin to extend the crediting period. Two years later, in 2016, the Russian government approved a draft protocol on amendments to the lending agreement to Venezuela. It was determined, reminds the agency that the debt in the amount of 2,84 billion dollars is consolidated and extinguished in equal semi-annual tranches over the 3 years from March 2019. This amount is set taking into account the delay in debt and interest, as well as interest on arrears.

In the US, they believe that Venezuela does not have much to hope for, for its debts have already turned into a real “whirlpool”.

For many years, the analyst recalls, investing in Venezuelan bonds has been “a popular game for the world's largest investors,” who were seduced by very “appetizing” interest rates. The dealers did not stop even the obvious risks.

Today, however, bonds have fallen in price against the backdrop of fears that the Venezuelan government will not fulfill its obligations on bond payments. Hence the reaction of speculators: many "traditional investors" of Venezuela went "to the exit." Now these unlucky businessmen are interested in public debt fundraisers specializing in the debts of those countries that are defaulted (read: bankruptcy) in the very near future. They already know in these funds: Venezuela will be next in the list of those who have fallen into the clutches of “restructuring”. This list includes Argentina (2000 year), Greece (2012 year) and some other countries. (Russians, we will note in brackets, also know firsthand what default is.)

The finish with Venezuela's debts is already obvious, according to financial experts. It's all about the price, says Lee Buckheit, a debt repayments specialist with thirty years of experience with the law firm Cleary Gottlieb Steen & Hamilton. “If you look at the behavior of problem investors, you will see: they wait for the price to reach a certain threshold. Usually it is 20 cents per dollar ... ”- this expert reminds.

The situation is still on the verge of default. The default would have come already in November, but Venezuela does not yet recognize itself as "default" on the sovereign debt, although the agency "Standard & Poor's" said that all the "conditions" for determining the default are in place.

Among these "conditions", the New York Times cites calls for debt restructuring, missed interest payments, default on bonds of an energy state-owned company, and a "unconvincing" meeting with investors held last Monday. Despite the problems, investors of “long positions” still believe that the government will find a way to continue paying.

Mr. Buckhate believes that investors are simply waiting for the real price of the bonds to not fall below what could be achieved through an agreement on debt restructuring.

However, we note, you can predict and predict anything. Meanwhile, political chaos and social unrest continues in the country. At the same time, the sanctions of the United States put pressure on the republic. All this forced the government of President Maduro to enter into negotiations with investors, and Venezuelan bonds fell against this background.

According to FactSet, which specializes in debt, companies such as Goldman Sachs, Fidelity and T. Rowe Price ”, still holding Venezuelan bonds for a total of about 3,5 billion dollars. These papers are issued by the national oil company Petróleos de Venezuela (Pdvsa).

It was these papers that used to be “favorite bonds” for foreign investors: after all, this company was considered a “cash cow of the country”. Pdvsa had a constant flow of foreign currency assets.

However, a few years ago, the situation changed. And today the Venezuelan economy continues to fall. Therefore, the risk of ownership of such bonds is quite high. Venezuela’s currency reserves fell below the level of 10 billion. According to economists, this level is close to the situation of insolvency. Experts believe that the recognition of default will deal a strong blow to the unpopular government of N. Maduro.

That is why speculators began to get rid of securities.

“Over the past year, we have significantly reduced our Venezuelan portfolio,” said Jan Dan, one of the leaders of Ashmore Investment Management (London), a company specializing in the securities market. The analyst believes that Venezuela is heading straight for the collapse.

Other experts, on the contrary, are rubbing their hands in anticipation of the prey.

Countries in distress are interested in “vulture investors”: such speculators in time of crisis unfold their work. And those of them who participated in many such situations say that Venezuela can become the most “profitable” of all countries that have rolled into default.

Many previous defaults in small countries in Africa and Latin America had limitations on the number of bonds issued and acquired. In larger countries, such as Argentina and Greece, the profits of vultures proved difficult: these countries were “doing tough deals”.

But Venezuela is a special case. There are several reasons for this, say debt experts.

Because of the American sanctions, the country could not hire a team of top bankers and lawyers who could help reach a favorable agreement with creditors, writes Landon Thomas. And, unusually, the government itself asked bondholders to develop a debt restructuring plan. In most cases, when the sovereign nation “runs out of cash”, debt offers simply go down to investors “from above”.

And most importantly: the Venezuelan oil company has lucrative assets in the United States and in Europe. Investors can hold these money through the courts - in the event that a country suddenly stops paying its debts. And again: in the end, "with all its problems, Venezuela is rich in resources and has the largest proven oil reserves in the world." In addition, "many billions of dollars" flowed out of the country, but they "could quickly return if changes in the government happened."

That is why, we note, vultures circling over Venezuela. Simultaneously with the collapse of neftyesializma, American and European tycoons recognize: the country is full of useful resources, you only need to properly dispose of them. The trouble is that under Chavez’s heir, this cannot be done. So what's the problem? It is necessary to change the government, and speculators will again be interested in investments in the securities of the republic.

However, the new government of Venezuela will have a very hard time. It is unlikely that it will become more popular than the Maduro government: in fact, those who change Chavez's protege will have to sell off national wealth for half the price in order to return debts, that is, just to keep afloat. Foreign “vulture investors” have no doubt that it will be so.

Famous problem debt specialist David Martinez, who once managed to play successfully in the Argentine crisis, is preparing to warm his hands in Venezuela.

Other vultures will come after him. For example, Hans Hums, founder and executive director of Greylock Capital, a fund specializing in distressed debt, is now trying not to sell Venezuela’s securities, but, on the contrary, to buy. "Over the next five years, Venezuela will become the best news On the market. It's a fabulously rich country! ”He rejoices.

No, this speculator, like many others like him, does not at all think of extracting billions from its financial depths. But he speaks quite confidently about the “average” rate of future profits. According to him, there is nothing to think about turning Venezuela into Switzerland, but this country “just needs to stop being Zimbabwe”.

So the bargaining is open, the vultures are circling. Who will give more for Venezuela?