Turkish politician commented on Ankara’s readiness to withdraw from NATO

November 22 2017
36
The statements of a number of Turkish politicians about the country's withdrawal from NATO are aimed, in particular, at influencing Turkey’s domestic policy, leads RIA News the words of a member of the Republican People’s Party (RNP) of Turkey, responsible for organizing international relations, Ozturk Yilmaz. 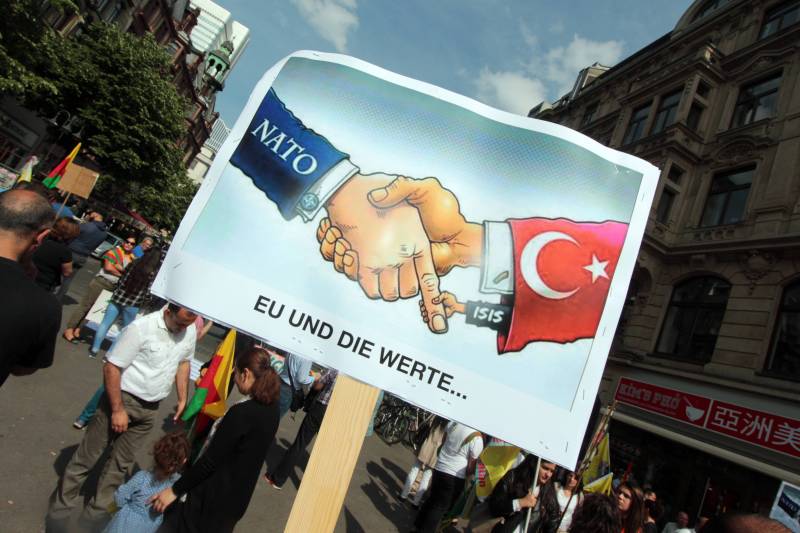 Demonstration of opponents of Erdogan in Frankfurt, Germany.

Earlier, Turkish President Tayyip Erdogan said that the organizers of the NATO Trident Javelin exercise, which took place on November 8-17 in Norway, set up a stand with portraits of "enemies" as a target, one of which depicted Mustafa Kemal Ataturk, the founder of the Turkish Republic, and another the current Turkish leader. The forty Turkish military who participated in the NATO exercise were recalled. The leadership of the alliance apologized to Erdogan, but he considered them insufficient.

The call to leave NATO is not reasonable. It was made ... in particular in order to receive additional support on the eve of the elections. These harsh statements about withdrawal from NATO were made to influence Turkey’s domestic policy,
Yılmaz told the agency.

He also said that the EU needs to interact even more with Ankara against the background of the country's internal problems, instead of punishing it (the EU recently decided to cut financial aid to Turkey due to violations of human rights and democratic standards in the republic).

Earlier, German Chancellor Merkel announced that she would offer Brussels to end negotiations on Turkey’s accession to the EU in connection with human rights violations in the country.

Ctrl Enter
Noticed oshЫbku Highlight text and press. Ctrl + Enter
We are
Erdogan: a provocation on the teachings of NATO insulted the entire Turkish people
36 comments
Information
Dear reader, to leave comments on the publication, you must to register.