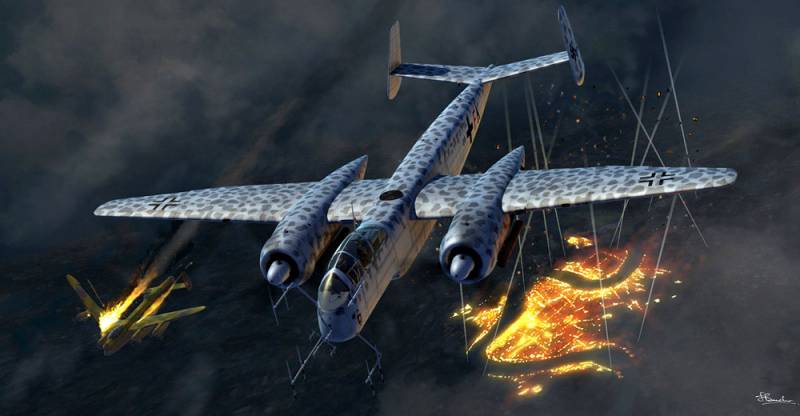 As is known, in the Anglo-American air force, which in the years of the Second World War made raids on Germany, there was a certain "division of labor". The Americans mainly worked in daylight and delivered targeted targeted strikes at strategic targets — plants, transportation hubs, airfields, etc. And the British flew at night, at a safer time, and burnt the cities with carpet bombing.

If the Germans fought quite successfully with the daytime raids (for example, during the bombardment of the bearing plant in Schweinfurt, the Americans lost the Flying Fortresses 36), then at night the British felt much calmer. Luftwaffe daytime fighters could not attack blindly, and improvised night interceptors made on the basis of two-engine Messerschmitt fighters Bf.110 and Junkers Ju.88 bombers were not very effective due to relatively low speed and insufficiently powerful weapons.

However, the situation began to change when specialized night hunters Heinkel He.219 Uhu ("Eagle owl") appeared in the sky above the Reich. The first flight of this machine took place exactly 75 years ago, at the end of November 1942.

"Owl" fully responded to its purpose and proved to be excellent in battles with the British bombers. In the first combat sortie of the 12 on July 1943 of the year, Major Shtreyb shot down five enemy aircraft! And for the following 10 nights, several experienced copies of the “Owl” shot down another 20 bombers, including six high-speed Mosquito, previously considered invulnerable.

This result was achieved by the Germans thanks to the high flight data of the Uhu, its extremely powerful weapons and rich technical equipment. Ne.219 on tests developed the speed of 615 km / h, the working ceiling of the machine reached 10300 meters, and the flight range was 2240 km. The plane had a sealed cabin and for the first time in world practice was equipped with ejection seats of both crew members.

The search for the enemy using the on-board radar FuG.212 "Lichtenstein", and besides him on the plane there was a radio altimeter, an automatic radio "friend-foe". radio compass and blind landing system. From the protective fire of the pilot's bombers, a thick frontal bulletproof glass and steel armor plate weighing in centners were securely covered.

Armament "Owl" was perhaps the most destructive of all the then fighters. It consisted of eight 20-millimeter guns with a large ammunition, six of which were directed forward, and two more - up to attack aircraft flying over an interceptor (the so-called “Shrage Music” system). In some instances, instead of two or four course 20-mm cannons, heavier 30-mm guns were installed. A volley of such a battery collapsed a four-engined bomber in seconds.

In addition, the "Owl" differed simplicity and ease of piloting. The Germans noted that the pilots transplanted to it from other types of fighters did not even need time to master and retrain. After one or two familiarization flights, they could be easily sent into battle.

After adopting He.219, the combat bills of the German night interceptors began to grow at an amazing pace. Some of them showed consistently fantastic results, for example, on the night of 3 in November of 1944, Chief Feldwebel Morlock, in 12 minutes, shot down six bombers alone. The best pilot of Uhu, Captain Manfred Meirer, destroyed the 65 of the British aircraft in a few months, and the captain Hans-Dieter Frank - 55. Moreover, all these victories were confirmed, as the battles took place over the central regions of Germany and the downed planes fell on German territory.

Uhu's own losses were insignificant and were mainly caused by airfield bombardments and disasters for technical reasons. The crews of the night interceptors also sometimes died due to the fact that their aircraft were hit by debris from the bombers they had shot down, and some pilots, carried away by shooting, were late in exiting the attack and inadvertently rammed their victim, dying with it.

Despite all their victories, Uhu could not change the situation in the skies over Germany and force the British to abandon the night bombing. They were too few for this. The Germans have not mastered a truly massive production of this expensive, complex and resource-intensive machines. In the 1943-44, the entire Filin 264 was built, of which, by the spring of the 1945, 45 combat-ready and several dozen faulty ones remained. And the British riveted "Lancaster" and "Halifax" much faster than the Germans had time to shoot them down. During the same years, more than ten thousand of these heavy bombers were commissioned, which made all attempts by German pilots and anti-aircraft gunners to defend their cities hopeless. 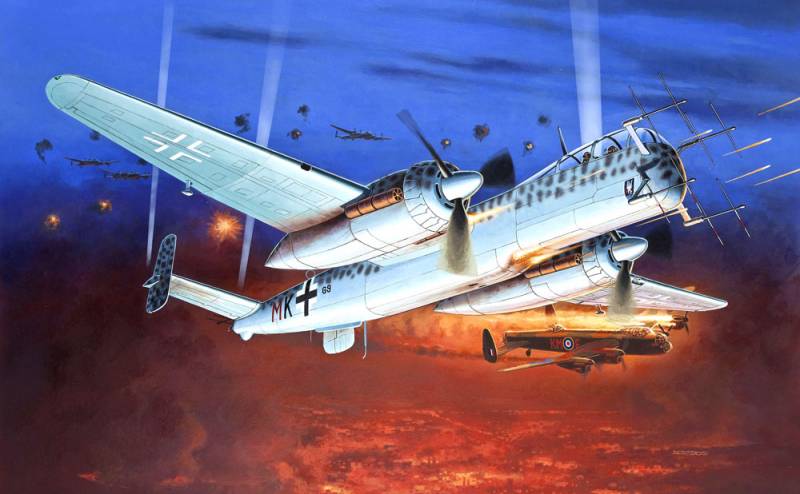 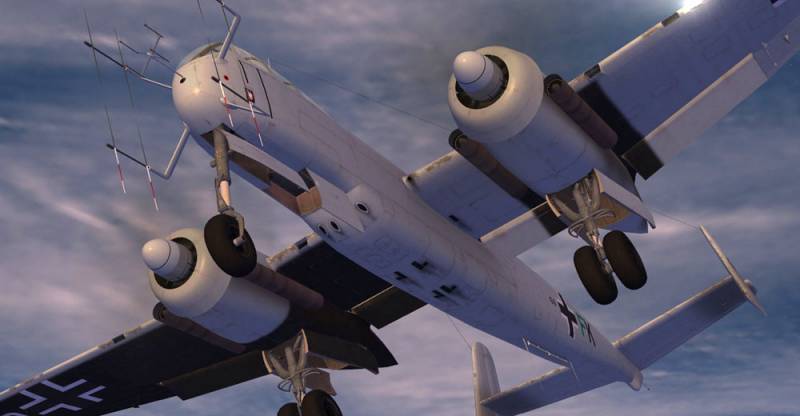 Not .219 in flight. Pay attention to the original color (one wing - black). This was done to facilitate the recognition of their cars by anti-aircraft gunners in the rays of searchlights.

Another computer drawing of He.219, on which, according to the current idiotic canons, the swastikas are replaced by gray diamonds.

Prototype "Filina" during the test. Radar antennas are not installed, but brackets for mounting are visible on the nose. 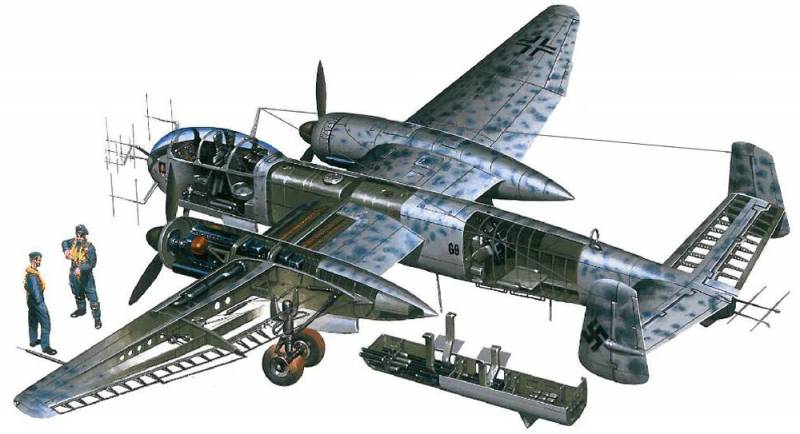 Layout diagram Ne.219. Under the fuselage there is a removable weapon bay with four cannons and sleeves for charging boxes located in the center section of the wing. 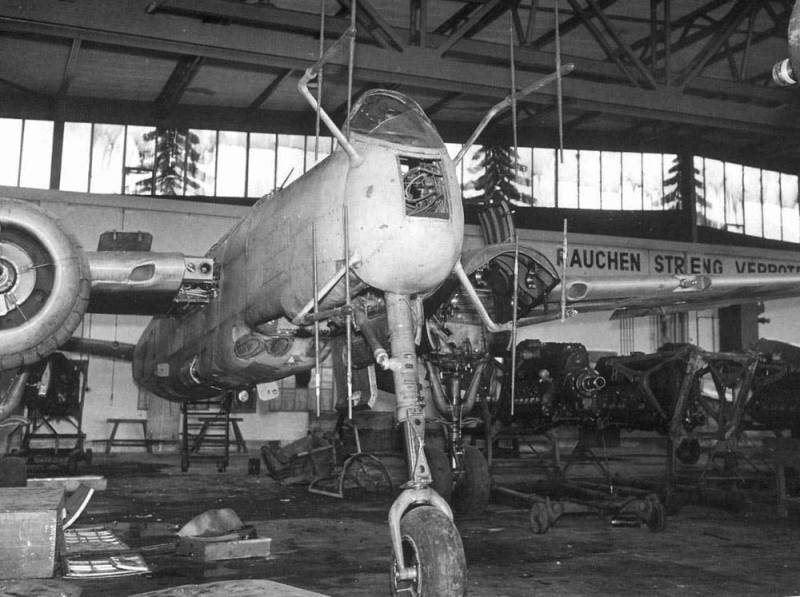 Disassembled "Owl" in the repair hangar. Right under the wing engines are visible on the carts. 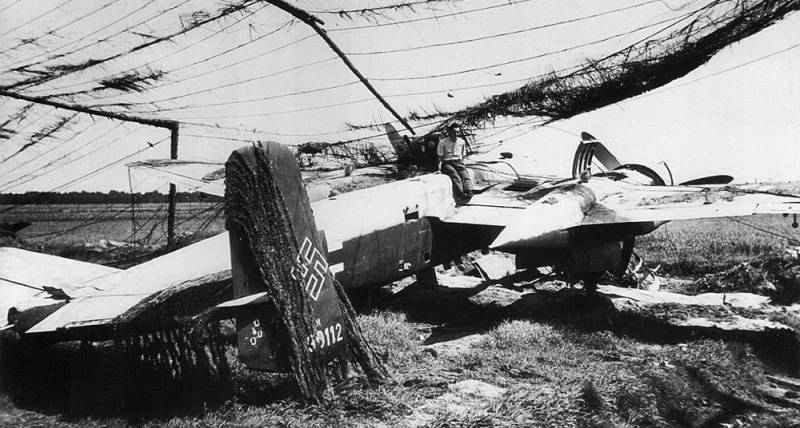 Defective He.219, captured by the Americans at the airport at the end of the war. 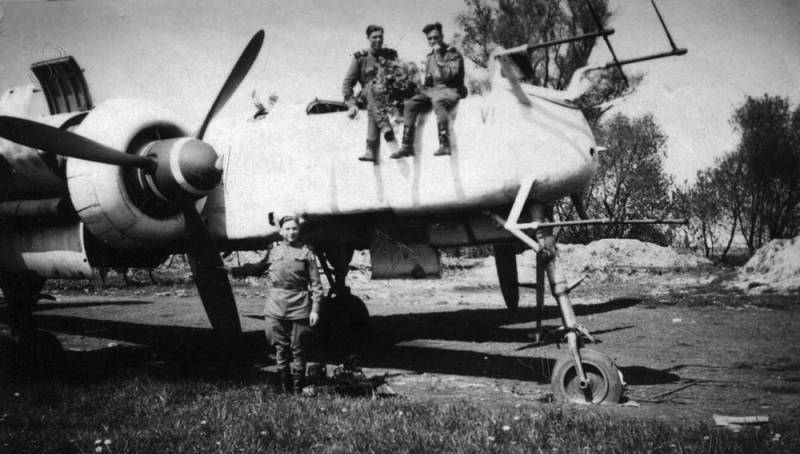 And this "owl" got ours.