Tanks in the city? Will American Javelins Dance Lezginka ...

November 22 2017
98
It became known yesterday that the US Department of State approved the implementation of Javelin anti-tank missile systems in agreement with Georgia. The acquisition cost of this document, which has been actively discussed between Tbilisi and Washington recently, is about 75 million dollars. The Georgian army can receive dozens of launchers and missiles for them with these funds. The high cost of the “kit” is due to the fact that it must also include American instructors who will conduct a kind of educational program for Georgian “warriors” within a few weeks of a special course. 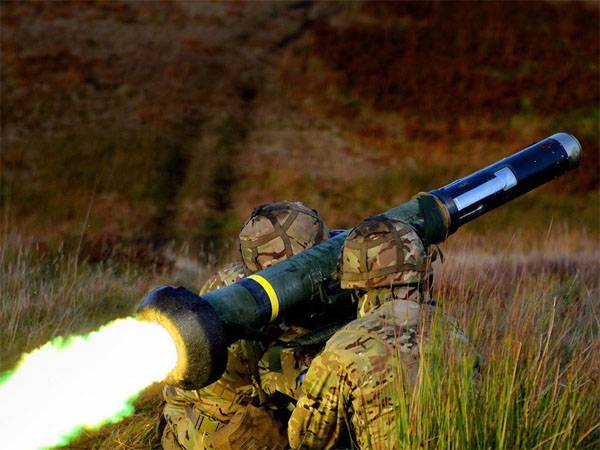 In the United States, it is noted that the Congress is ready to give the go-ahead for sending anti-tank missile systems to Georgia in order to “help” the Georgian army to continue along the path of Euro-Atlantic integration.

In this regard, there are at least two questions. First question: why did Georgia need Javelin ATGMs? Question two: is NATO ready to go far in terms of real integration of the Georgian state into its membership?

It is worth starting, perhaps, with the second question.

NATO, “having expanded” to the point that almost all of Eastern Europe was caught up under the structures of the western military bloc, today rests not only on the borders of Russia, but also in the letter of its own charter. And this statute says that the North Atlantic Alliance, which positions itself not only as a military association, but also as a political union, cannot accept countries with territorial issues. Georgia, as is well known, has such questions: official Tbilisi continues to consider the territories of Abkhazia and South Ossetia as its own, despite the fact that these states have not only declared their sovereignty, but are recognized sovereign powers by a number of UN member countries. Russia, including.

In any other scenario, Georgia would already be in NATO. But at the time, he foiled Saakashvili, who, being inspired by verbal support from overseas, decided to play Napoleon. The outcome of that Bonapartism is also well known - by chewing a tie and crawling along dusty roads with the noise of the engines of a Russian combat aircraft. And now Georgia has two options: either forget about Abkhazia and South Ossetia, or forget about NATO. However, this alternative is seen in Georgia itself by those who can be classified as sober-minded politicians. But the situation is quite different from overseas.

Given that the NATO charter, like any code written by “partners,” is carried out solely in the interests of the main player, this very player can quite well with the charter and experiment. As an extreme (radical) option is to start accepting new “comrades” in NATO, even in parts, at the “soup set” level. If only to feed the NATO machine, satisfying its growing hunger with revenues from the budgets of newtonovtsy and new territories and waters under the next military bases.

But nevertheless, this is precisely what is radical ... And overseas partners are, for the most part, hard-nosed conservatives, which means that they will work out the training manual read to the holes on how to expand the military bloc in full. It is on the basis of this concept that one can proceed to answer the first, previously posed question. The question is, I recall, "why does Georgia need Javelins?"

So the fact of the matter is that Georgia, as it were to put it mildly, they are not really needed. Indeed, in Georgia there are enough those who remember very well how the valiant “guards” threw almost brand new American “Hammers” and other American “utensils” right on the roads at the moment when they were opposed by a full-fledged force - which had to come out after the provocation of Mishiko regarding peacekeepers. Georgia remembers, Georgia knows ... Especially since no "tanks in the city of Tbilisi, as they say, it doesn’t feel, and obviously it would not want to climb on the rampage itself. But who then asks them? ..

If Georgia is “not very” needed, then those who, with the hands of the Georgian military, once again intend to arrange a “small victorious war” to collect and glue the territories for their admission to NATO, are not at least united, but cumulatively. It turns out - it will not work, this is not so important for the United States. Even if it does not work out, the next "war" next to Russia, in the Caucasus direction, where hundreds of ISIS terrorists (* banned in the Russian Federation) so willingly try to return from Syria and Iraq, the United States definitely will not hurt. For any source of instability at the borders of the Russian Federation is already the embodiment of the main goals of the North Atlantic military bloc, in which Russia is now openly called the main enemy.

Right there, at the same time, strategists from the other side of the Atlantic are going to kill another hare: to probe Georgia on the subject of transit of territory for distilling lethal weapons to Ukraine. Although, by and large, Georgia has already been probed - it was distilled through it to Ukraine (and through Ukraine to Georgia, by the way, too - in some cases) not only weapon, but also specialists in color revolutions, including Saakashvili mentioned more than once. The Georgian snipers, who, as Italian journalists found out, took the most direct part in the shooting of people on the Kiev Maidan under stormy ovations of Nuland, Biden and McCain, were also distilled.

In general, if the “Javelins” suddenly come up somewhere in the area of ​​Volnovakhi, Avdiivka or the Village of Lugansk near the Ukrainian “avatar-cyborgs”, then it is unlikely that anyone will be seriously surprised. Moreover, they may well emerge in the very near future, because we are not the only ones monitoring the situation in the LC. The situation is actively "monitored" and "great friends of Donbass." And this situation, you forgive me generously, frankly carries shit. If the Ukrainian “cavalry” really decides to jump across the line of demarcation - will the original unity be found in the republic (at least in the LPR), which, at a minimum, will drive these “gray apples” back to the stall? So far, according to reports, they are already trying to drive each other to the joy of “friends of Donbass” from Kiev and Washington in a stall in the republic.

Guys, give the same reason ...

Ctrl Enter
Noticed oshЫbku Highlight text and press. Ctrl + Enter
We are
Situational analysis of the death of the MH17 flight (Malaysian Boeing 777), made on the basis of engineering analysis from 15.08.2014Russia and Georgia: traps from "well-wishers"
Military Reviewin Yandex News
Military Reviewin Google News
98 comments
Information
Dear reader, to leave comments on the publication, you must sign in.