The feat of the peasants Nikon Shilov and Peter Slots 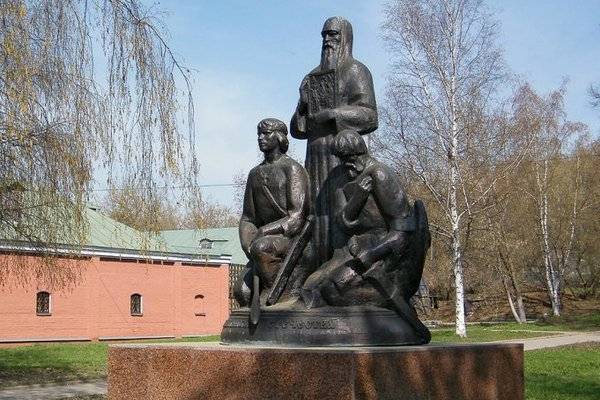 Monument to the peasants Nikon Shilov and Peter Slot in Sergiev Posad, near the walls of the Trinity-Sergius Lavra

The peasants Nikon Shilov and Peter Slota, who at the cost of their own lives destroyed the trench under the Pyatnitskaya Tower

The monastery of St. Sergius of Radonezh, which played a crucial role in the XIV century during the invasion of Temnik Mamai in Russia, was to re-enter the military arena now during the Time of Troubles and the Polish-Lithuanian occupation.

At a time when many Russian people, having lost their spiritual sense and political orientation, fell into the fetters of an impostor and recognized his authority, the monks of the Trinity-Sergius Monastery retained their wisdom. The monastic authorities saw right through the true goals of the impostors, and therefore came to the defense of the national interests of Russia and Orthodoxy. For the interventionists, the seizure of the monastery, which remained a powerful political and religious center, was no less important than the capture of Moscow and the Kremlin, where the government of Vasily Shuisky was located.

In early October, the 1608, the invaders took the monastery, which at the same time was a powerful fortress, under siege and made several attempts to capture it. Secretly they drove under the Pyatnitskaya Tower, its explosion would have provided access to the monastery.

At the same time, there were regular clashes between the defenders of the monastery, who made forays beyond the monastery walls, and besiegers. In one of the attacks, the Russians captured several opponents who reported on the upcoming dig, which would be ready for Mikhailov's day - November 8.

In order to thwart the enemy’s plan, several attacks were undertaken, which the Poles repulsed. Then the defenders went on an extremely risky step, two detachments of Russian soldiers were to distract and bind the main forces of the enemy, and the third, commanded by the head of Ivan Vnukov, at that time undermined the undermining.

The charge was successfully laid, but there was no time left to blow it up safely for life, the Poles noticed the actions of the bombers and quickly headed towards them. At a critical moment, when the operation was about to break down, two peasants Nikon Shilov and Peter Slota (Solota), sacrificing themselves, carried out an undermining.

The feat of the peasants immortalized the Russian militaryhistorical society. At the entrance to the main - the Holy Gates of the Lavra, on the right side there is a plate with the inscription: “On November 9, 1608, during the memorable siege of the Holy Trinity Sergius Lavra by Polish and Lithuanian troops, the enemy undermining led under the Pyatnitskaya Tower was heroically destroyed by Nikon's Clementine peasants Shilov and Slot, right there in a trench and burnt down ... ”*

The destruction of the tunnel, prevented the explosion of the Pyatnitskaya Tower and the seizure of the monastery, but this victory was bought at a high price, 174 was killed during the operation and 66 defenders of the fortress were injured.

Defenders of the "heart of Russia" will have to keep 15 siege months, faith will help withstand it, along with courage and heroism it will help expel the invaders from the borders of the Fatherland.

* The historian Tyumentsev believes that this event occurred on November 11 of the year 1608.

Ctrl Enter
Noticed oshЫbku Highlight text and press. Ctrl + Enter
We are
Kulikov battle. 1380Russian allies of Mongolo-Tatars
7 comments
Information
Dear reader, to leave comments on the publication, you must to register.