Wolf gate. December 1999 of the year - another black page in the history of the Chechen war

April 5 2012
17
The Argun gorge is one of the largest in the Caucasus gorges, formed by the breakthrough of the turbulent waters of Argun. Today, it is planned to place a ski resort here, and after all, quite recently this area was spilled with the blood of Russian soldiers. Bullets whistled around, glittering in the green thickets of glass sniper sights, as if from under the ground appeared "spirits". At the end of December 1999, the 84 th reconnaissance battalion and special forces were ordered to attack the Wolf Gate, as the entrance to the gorge was called. 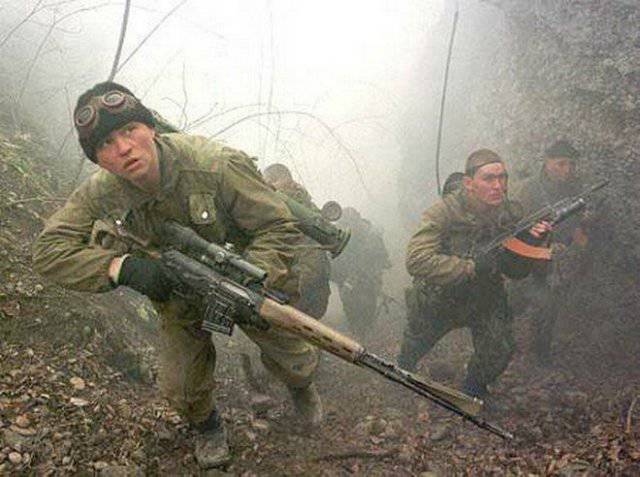 The reconnaissance 84 battalion arrived in Chechnya as early as September 1999, it consisted mainly of soldiers with low professional training, only a small part of the battalion included professional officers and contract servicemen. However, it was due to this relatively small group of military battalion losses until December 1999 that year were minimal. Some of the officers already had experience of military operations in five and even seven hot spots. By December, even inexperienced young soldiers had the necessary experience and could competently act even in difficult unforeseen situations. Shortly before the operation in the Argun gorge, the 84 battalion was used as an assault on the Gikalovsky heights. At the time of the assault on the 84, the reconnaissance battalion was a serious force capable of fulfilling its combat mission.

Wolf Gate to the beginning of 2000, was an important strategic point. This area, in fact, was the gateway to the southern regions of the republic, so the militants were preparing for a collision long before the start of the assault. Numerous camouflaged trenches, carriages dug deep into the ground and shelters, stretch marks — all this was prepared in anticipation of federal troops. At the head of the mountaineers stood Khattab, experienced and battle-hardened, who knew the terrain well and had at his disposal a wide agent network. Many of the participants in the storming of the Wolf Gate are convinced that among the agents of Khattab were individual Russian commanders who received considerable rewards for the transfer of information.

The 84 th battalion together with the special forces detachments were instructed to ascertain the number and location of the militants in this sector. Intelligence was supposed to conduct combat. Near the gorge was the peaceful settlement of Duba-Yurt, which was referred to as “contractual,” which meant that residents maintained neutrality. Federal troops did not have the right to introduce military equipment into the treaty settlements, but in fact the agreement was respected only by the federal command, while local residents actively supported the Khattab forces.

It seemed that the operation was thought out to the smallest detail, even the frequency of radio messages was determined unified so that the groups could hear each other's messages and coordinate their actions. According to the plan, special forces units were to move ahead, followed by reconnaissance groups, which periodically had to stop and wait for the infantry. The promotion of the combined groups was supposed to support aviation and artillery. Not far concentrated tank regiment.

Alexander Solovyov, in his interview, admits that he was already at the stage of preparing the operation, he was confronted with the unexplained behavior of the command, namely Lieutenant Colonel Mitroshkin. To this day, it is not clear to him why the commanders were taken to Dubna-Yurt itself for reconnaissance, because the actions were planned to be carried out at heights. Some fragments of phrases transmitted by the major suggest the idea of ​​betrayal in the circles of command. The other party, the other participant, Vladimir Pakov, claims that he knows both the commander of the Zapad group and Lieutenant Colonel Miroshkin and other commanders himself and does not believe in their betrayal. In his opinion, the militants, having at their disposal more sophisticated communication devices, tuned in to the frequency, which is confirmed by the facts of the radio game during the assault.

The beginning of the operation was scheduled for the evening of December 29, but Solovyov’s detachment had to speak in the morning, as the militants discovered a group of special forces, whom the command decided to assist. The size of the detachment was just 27 people, of whom 16 belonged to the reconnaissance battalion. The group advanced on two infantry fighting vehicles, then the movement continued on foot. It was impossible to move quickly along the foothill areas in full gear. In addition, the militants were attacking solid fire, so they had to hide behind armor and gradually moved towards the forest. It turned out that it was not difficult to find the spetsnaz members trapped in Khattab’s fiery ring, since the group still had communication, but the combined group could only cross the sweep zone and take height after six hours.

Alexander Solovyov recalls that on the approaches to the altitude were minefields established by Russian specialists. And again the major asks a question about why they were not warned about the presence of stretch marks, which only chance had helped to detect. Solovyov’s squad lost two people wounded, while in the assault group one soldier was killed. The task was completed, three wounded Special Forces soldiers were taken to the camp and transferred to the doctors. During transportation, Solovyov’s group lost another soldier who was shot and wounded by a sniper. As soon as the first consolidated group left the area and built, it was again thrown to the rescue of the detachment Zakharov.

December 30 in the middle of the day, all three consolidated groups were made - the operation began. Solovyov and his fighters again had to take the heights left before by order of Colonel Mitroshkin. Already at this stage, the commanders gradually came to understand that the militants were listening to radio communications and are well aware of the assault plan. On the places defined on the map, the attackers were waiting for an ambush. Check terrible guesses confirmed. The second consolidated group, which consisted of "Baykul" and "Owl", at that time was under heavy fire from mortars. Early in the morning, Tarasov’s group was in an ambush and gave signals for help, leading a fierce battle. The command sent the group of senior lieutenant Shlykov to assault on the height 420.1. At this time, consolidated groups were fighting on the direction to the special forces of Tarasov. Militants continued active disinformation on the air as a result of which “Nara”, the so-called Shlykov group, was also ambushed in the center of Duba-Yurt. 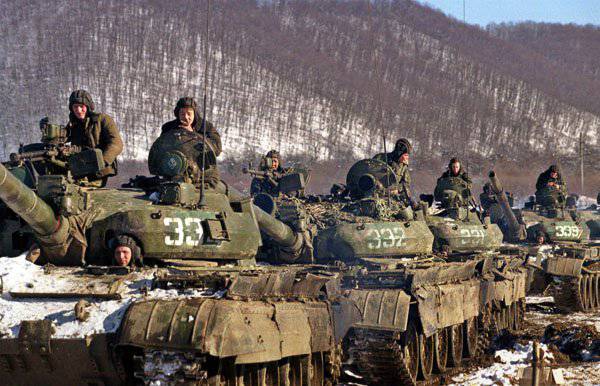 Artillery could not provide high-quality cover due to poor visibility. In the village, a Russian column was shot from a grenade launcher, soldiers were knocked out by snipers. The air was filled with cries for help. However, it turned out to be impossible to use aircraft, as the thick sheet of fog covered the Oak-Yurt. “Shark” came out to help Shlykov, but the second column was immediately fired upon entering the village. The scouts dispersed and decided to shoot.

Kombat Vladimir Pakov supported the groups squeezed in the fire of militants. Without waiting for the order of their command, with the tacit consent of Colonel Budanov, they were sent to the place of the battle of the tank with crews 2. According to Solovyov, without the support of technology from the ring, the soldiers could not get out. Apparently, the militants did not expect tanks to appear in the village, so their appearance caused confusion and turned the tide of battle. Six hours of fierce fighting almost destroyed the center of the village.

The first day of the year 84 reconnaissance battalion and special forces burned by enemy fire were counted by counting the losses. The Storming of the Wolf Gate claimed the lives of ten scouts and twenty-nine more were injured. However, after a bloody battle, the command of the reconnaissance battalion was waiting for a new battle, a battle with the investigators of the special department. Only Alexander Solovyov was called in for questioning about eleven times, and, according to him, exerted the strongest psychological pressure. It turned out that there were no official orders for the 29-31 December reconnaissance operation, 1999 did not exist, they were blamed for the direct commanders for the death of people and the failure of the assault. Particularly interested in the candidacy of Pakov, who arbitrarily used tanks and had a decisive influence on the outcome of the battle.

The officers of the special department withdrew from the battalion and special forces location solely out of fear of the possibility of a soldier disrupting, since there was confidence in the generals' treason among the people. Armed soldiers could at any time break the line of the statute and deal with those whom they considered traitors. The investigation did not establish the perpetrators, no one bore responsibility for the death of people.

From the serious injuries received in battle, died private A. Box.

During the assault, the courage of the Russian privates and officers showed up, but the operation was obviously unsuccessful. Detachments engaged in battle with the enemy, outnumbered in weapons and technical equipment. The leadership stagnation in decision making also played a sad role. In some cases, assistance to groups killed under fire was not provided for fear of being punished for unauthorized actions, orders were not given in time. The question of the awareness of the militants about all the actions of the Russian groups was raised already in the first days of the battle; even the reason for such awareness was revealed - the availability of the radio frequency. However, the problem was not resolved. In the attempts to blame the death of the fighters of direct commanders, the fear of top management for their own well-being is also especially visible. Against the background of what happened, it is not surprising that the majority of participants in hostilities to this day consider the tragedy that has taken place in the gorge of Argun as a betrayal.
Secrets of the Chechen war. Wolf Gate (Russia, REN TV) 2010 year

Ctrl Enter
Noticed a mistake Highlight text and press. Ctrl + Enter
We are
First muslimFight at the Wolf Gate
17 comments
Information
Dear reader, to leave comments on the publication, you must to register.