November 22 2017
19
On November 16, a major event took place in Kazan, most seriously affecting the further development of the Russian strategic aviation. At the Kazan Aviation Plant. Joint venture Gorbunov held the ceremony of rolling out the new strategic bomber Tu-160M, built using the existing backlog. In the foreseeable future, the first aircraft will be followed by new machines, also assembled from existing components. In the future, as expected, the Kazan enterprise will resume the full cycle of construction of such machines.


At present, only the X-NUMX Tu-16 aircraft are in service with the long-range aviation of the Russian Aerospace Forces. In recent years, this technique regularly underwent the necessary repairs and upgrades, which made it possible to bring it into the desired state. However, the number of available equipment was considered insufficient. The result was a decision on the resumption of the construction of aircraft. According to previously announced plans, the Kazan aircraft factory in the foreseeable future should realize the existing groundwork for several bombers, and then build about 50 cars from scratch. 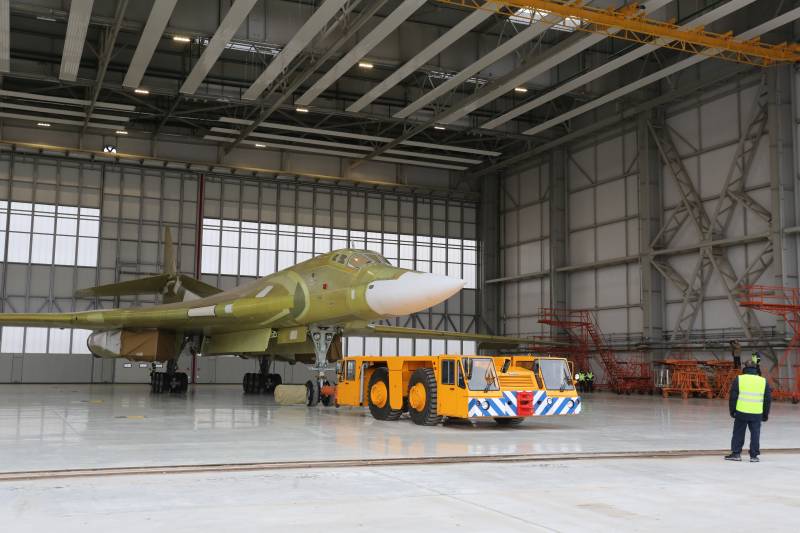 For some time after the appearance of executive orders, the aviation industry was engaged in working through various technical and technological issues. Later started active work on the assembly of the finished aircraft. According to known data, this year Kazan specialists checked the condition of all the elements of an unfinished airframe with the 804 serial number. In addition, the assembly of wing consoles was completed with their subsequent installation on the swivel assemblies of the center section. At the same stage, some general aircraft systems were installed.

In July, the partially completed glider was transferred to the final assembly shop, where it was to be equipped with all the remaining equipment. As reported at the time, the required work will take about three months. With every effort, the Kazan Aviation Plant fulfilled the task. The units, which had been idle for a long time, were turned into a full-fledged aircraft, corresponding to the current project Tu-160M. It should be noted that the fact of a fairly rapid completion of the existing reserve clearly demonstrates the potential of industry in the context of the development of long-range aviation.

November 16 - on the 90 anniversary of the foundation of the Kazan enterprise - a solemn rolling-out ceremony took place. From the final assembly shop, the car was sent to the flight test station, where the necessary checks will begin shortly. In the coming months, the new Tu-160M will work exclusively on the ground, passing the necessary tests. The first flight will take place in February next year. Upon completion of all necessary checks on the ground and in the air, the first car of the new series will be handed over to the customer in the person of the Ministry of Defense. The handover ceremony will take place in the coming years.

According to previously published data, in the foreseeable future, the Kazan aircraft factory will have to use the existing groundwork for several bombers. At the time of stopping production, units for a number of machines remained in the shops of the enterprise. Hoping for the best, the aircraft manufacturers did not send them to the scrap and saved. As it turned out, this decision was correct. It was the preservation of the reserve allowed to submit a new car as soon as possible after receiving the appropriate order.

It has already been announced that after the implementation of the existing reserve, Kazan aircraft manufacturers will start building new missile carriers from scratch. Officials indicated that the Aerospace Forces required about fifty such machines. At the same time, new bombers should be built according to the improved project Tu-160М2. This project is currently under development. Design work will be completed by the time Kazan Aviation Plant has finished assembling aircraft from the ground.

In parallel with the assembly of unfinished aircraft in the past and preparation for the construction of new cars, the Kazan enterprise will have to undergo modernization. According to the United Aircraft Corporation, the aircraft factory is already receiving new equipment, as well as carrying out the restoration and modernization of the existing one. Also updated are the main approaches to work. The plant develops digital technologies in the framework of construction and technical support of its products.

To date, as part of the program to restore the production of strategic bombers, the Kazan Aviation Plant has managed to solve some of the tasks in upgrading production facilities. Other projects in the context of the modernization of production will be implemented in the near future. According to open data, up to 2020, the plant will have to spend at least 6 billion rubles to upgrade the material part.

Part of the required work has already been completed or is nearing completion. So, after the reconstruction, the world's largest installation of electron-beam welding and vacuum annealing was returned to operation. Replaced part of the other equipment. The reconstruction of the main communications and engineering networks of the enterprise is underway. By the end of the year, the modernization of the airfield will be completed, providing for the construction of new facilities and structures.

Until the end of the decade, all major production lines will be upgraded. The technical re-equipment of the welded, machining and blank-stamping production has been announced. There is information about the imminent start of construction of a new final assembly shop. All these changes and updates will allow the plant to increase productivity and solve its tasks with greater efficiency. With certain confidence, it can be assumed that all new and updated production facilities or workshops will be directly involved in the new bomber construction program.

During the recent roll-out ceremony, the first new bomber announced some plans for the further development of the Tu-160 family of vehicles. Thus, the management of the company "Tupolev" announced the timing of the appearance of a completely new car. The first results of the work on the creation of experienced aircraft that have undergone a deep modernization, will appear in the near future. The first flight of the Tu-160M is scheduled for 2019 year. Officials clarified that such a project envisages, first of all, a most serious upgrade of the avionics complex.

Restoration and modernization of production capacities, first of all, are connected with the need to deploy a full-fledged production of new equipment. Using the saved reserve, the Kazan Aviation Plant will be able to build only a few Tu-160 aircraft and perform only a small part of the customer’s plans in the person of the Ministry of Defense. The military department earlier pointed to the need to build fifty new cars, and for this it is necessary to start the assembly of the cars from scratch again.

The theme of the timing of the resumption of mass production has been touched several times by officials. So, about a year ago it was announced that full-scale serial construction of new missile carriers would begin in 2023. In the middle of this year, the leadership of the Ministry of Defense announced other plans. According to new data, this process is scheduled to begin in the 2021 year. The desired production rate has not yet been specified. At the same time a few years ago it was announced that in order to obtain the required effect, the troops needed about fifty new aircraft. 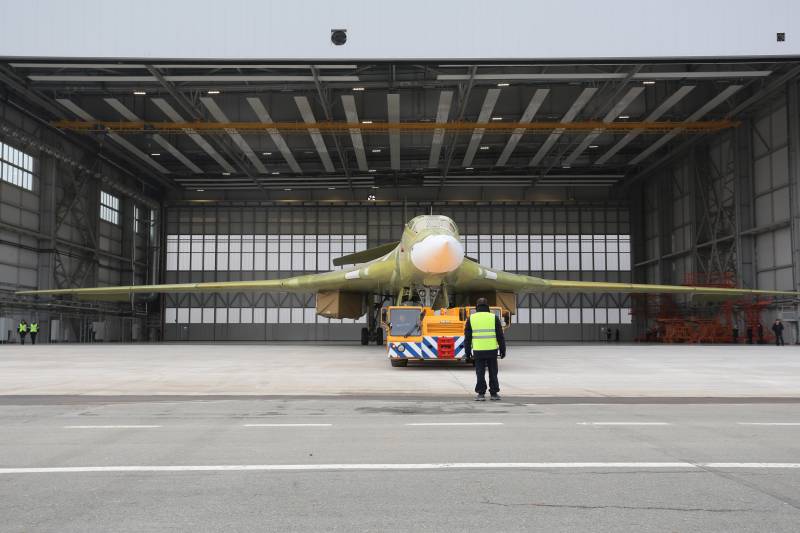 In the near and distant future, the Russian aviation industry, headed by PJSC Tupolev and the Kazan Plant, will have to build several dozen new strategic missile carriers such as the Tu-160М and Tu-160М2. This program began with a kind of "warm-up", in which production should be completed existing reserves. Then, having restored the necessary capabilities and recalling the required experience, the industry will be able to proceed with the production of completely new machines assembled from scratch.

According to the latest data, the serial production of aircraft of a completely new series starts only at the beginning of the next decade, but for now the Kazan aircraft factory will use the existing reserve. The first result of this use has already been obtained - the finished aircraft with the “804” serial number, which had been standing idle for two and a half decades in the form of a set of units, was transferred to the flight test station. Thus, an enterprise from Kazan is capable of, at least partially, solving urgent tasks within the framework of the re-equipment of the videoconferencing system.

The continued development of production capacity and the restoration of lost potential in the foreseeable future will lead to the emergence of a full-fledged opportunity to assemble aircraft from scratch. In the 2021 year, according to current plans, the construction of the first Tu-160М2 of the new series will begin at the Kazan Aviation Plant. After this work will continue, and long-range aviation of the Aerospace Forces will be able to most noticeably update their fleet of equipment, which is of particular importance to the security of the country.

It should also be noted that the modernization of the Kazan Aviation Plant. S.P. Apparently, Gorbunova is connected not only with the restoration of the production of Tu-160 aircraft. At present, development work is underway in the framework of the new PAK DA program, the purpose of which is to create a fundamentally new strategic bomber. There are well-known reasons for the assumptions about the future construction of such equipment in Kazan. When the first experimental PAK DA aircraft will be laid is not yet known. However, it is obvious that the experience of production of new Tu-160 will positively affect the release of more new technology.

Thus, the recent solemn ceremony of the transfer of the Tu-160M aircraft sums up the recent work of the aviation industry in general and Kazan specialists in particular, and also demonstrates at least some of the potential of enterprises in the context of the medium and long-term perspectives of long-range aviation. Work continues, and new success messages will appear on a regular basis.

Ctrl Enter
Noticed oshЫbku Highlight text and press. Ctrl + Enter
We are
The difficult fate of the Tu-160 (part of 1)An-12 in Afghanistan
Military Reviewin Yandex News
Military Reviewin Google News
19 comments
Information
Dear reader, to leave comments on the publication, you must to register.