I.Kornet declared the identification of agents of the special services of Ukraine in the structures of the LPR government

November 21 2017
25
Against the background of information about the overlapping of the central part of the capital of the LC weapons in hand, comes news about the detention in the republic of the Ukrainian sabotage and intelligence group. It is reported that armed Ukrainian saboteurs tried to penetrate the territory of the Luhansk People's Republic for committing destructive actions.


Lugansk Information Center cites the text of the statement of the Minister of Internal Affairs Igor Cornet:

Tonight, the Ministry of Internal Affairs of the LPR stopped the activities of the Ukrainian sabotage and reconnaissance group, which was trying to penetrate the territory of the Republic to carry out a number of resonant sabotage and terrorist acts. Most saboteurs arrested. The search and detention of the remaining members of the group and their accomplices continues.

Currently, the situation in the Republic is fully controlled by law enforcement agencies. The Ministry of Internal Affairs works in a regular mode, the personnel of the department continues to fulfill its duties.

I also want to dispel rumors about my resignation.

Recently, as a result of the destructive actions of a number of officials, criticism of the law enforcement agency in the media has intensified. For a long time, these persons before the Head of the LPR deliberately conveyed inaccurate information about the alleged involvement of employees of the Ministry of Internal Affairs in illegal activities.

This is due to the fact that we have obtained irrefutable evidence of the involvement of individual high-ranking government officials in criminal activities to the detriment of the interests of the republic and the people of the Luhansk region.

I, as a representative of the rule of law, have become accustomed to speak openly, so I am not going to shield anyone.

This is followed by very unexpected information. According to I. Cornet, Anastasia Shurkayeva, the director of the State Television and Radio Company of the LPR, and Irina Teytsman, who served as the head of the administration Igor Plotnitsky, were involved in the activities of the Ukrainian special services in the republic. 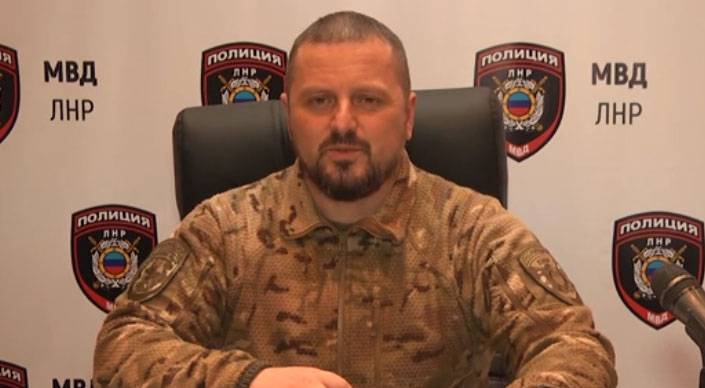 From Cornet’s statement:
The involvement of the special services of Ukraine of the head of the Government Security Service of the Ministry of Internal Affairs of the LNR Yevgeny Seliverstov to the staging of the coup in LNR in September by the 2016 was established. As a result, the former Prime Minister and my comrade Gennady Nikolayevich Tsypkalov were killed and the deputy commander of the People’s Militia of the LPR, Vitaly Kiselyov, was sentenced to a long prison term.

These activities were carried out with the direct participation of a number of high-ranking employees of the Prosecutor General's Office, who were engaged in fabrication of these criminal cases.

After the MIA had irrefutable evidence of the involvement of these individuals in these crimes, the latter took measures to discredit the department and dismiss key employees of the Ministry who were directly involved in the opening of the organized criminal group.

Tonight I provided all the available materials to the Head of the LC, Igor Plotnitsky, who decided to initiate criminal cases and arrest all of the defendants: the Director General of the State Television and Radio Broadcasting Committee of the LN Anastasia Shurkayeva, the head of the Administration of the Head of the LC of the Lugansk People's Republic Irina Teytsman, as well as the Head of the Government Security Service of the LNR Yevgeny Seliverstov.

We will remind that earlier in the Ukrainian press there were statements that armed people in the center of Lugansk appeared due to the fact that Igor Cornet "did not accept his resignation" and is ready to "speak out against Plotnitsky."

Ctrl Enter
Noticed oshЫbku Highlight text and press. Ctrl + Enter
We are
ATCM "Cornet-EM" was tested
25 comments
Information
Dear reader, to leave comments on the publication, you must to register.