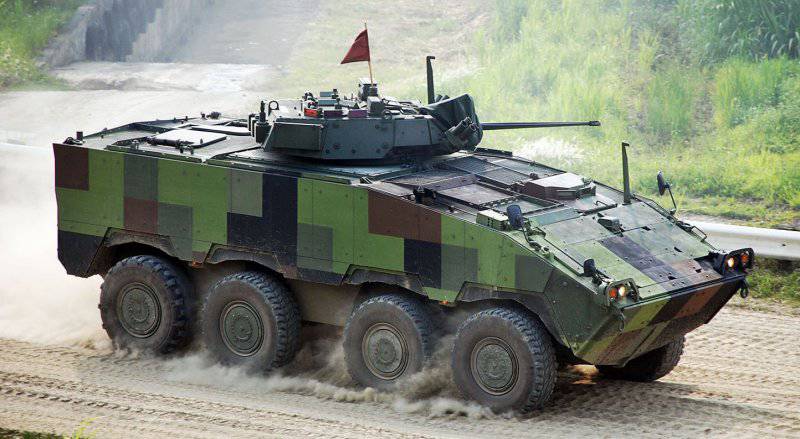 Taiwan’s efforts to manufacture its own infantry fighting vehicles with a wheel formula 8х8, known as CM-32, almost ended in complete failure. Taiwan introduced CM-32 at a military preview in Nantou County in January 2005. Then President Chen Shui-bian told reporters that the project would create jobs and be able to improve 23’s million-strong island’s defenses.

Named after a Taiwanese smoky leopard almost gone, the CM-32 almost repeated the fate of the leopard itself. The project faced numerous problems ranging from legislative inertia, budgetary problems to constructive flaws. 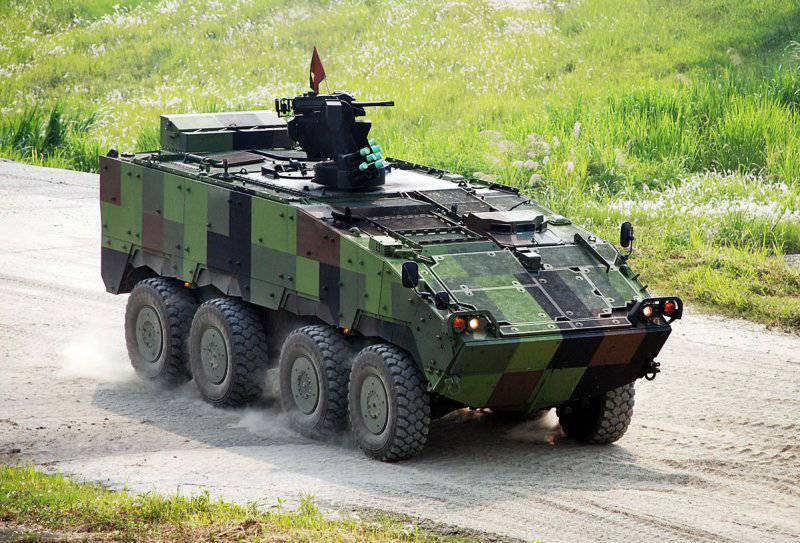 Produced and developed by the Arms Development Center (Ordnance Readiness Development Center, ORDC), the Smoky Leopard is the second infantry fighting vehicle encountered during the project phase. The first was the ill-fated BMP Quick Leopard CM-31 with a wheel formula 6х6, the project of which was stopped in 2000-th year faced with difficulties in the development. This car was created in conjunction with the Irish company Timoney Technology Limited with the possibility of licensed production in Taiwan. In connection with the failure of CM-31, the military began the development of CM-32 in 2000 year as a replacement for CM-31.

The time has come for the CM-32 project to face the threat of closure. First, lawmakers in Taiwan froze two-thirds of the CM-32 project budget as a punishment by the Ministry of National Defense (MNO) for "non-compliance with budget protocols."

A source close to the Taiwan National Security Council believes that there is a “back cover fight” associated with “individuals who want to do business on BMP subsystems such as towers, weapons, night vision devices, etc. On the other hand, it is necessary to rethink the use of commercial and standard components on this BMP, especially the engine and gearbox, to reduce costs. " 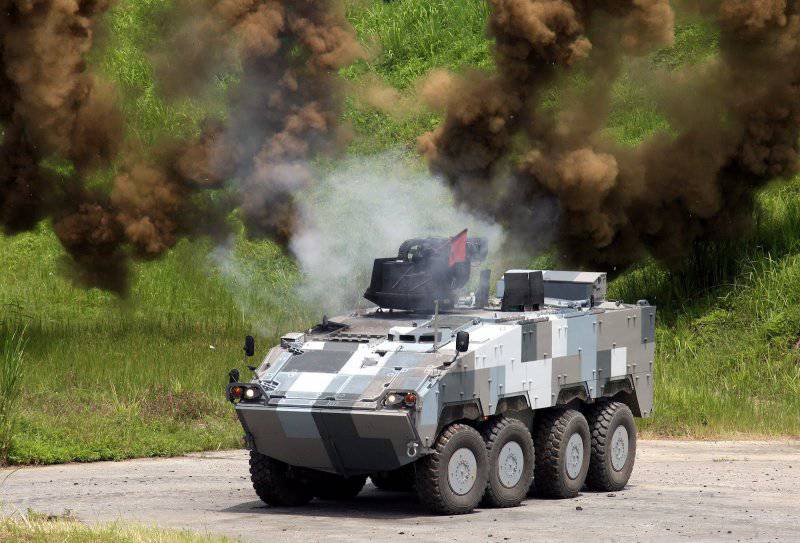 Additional problems were related to the fact that the weight of the BMP exceeded 22 tons, which is approximately 5 tons more than most machines of this type. BMP was criticized due to the lack of amphibious capabilities at the initial stage of designing. Not without problems with the suspension and traction. During a demonstration in January 2005, the BMP made several unsuccessful attempts to climb the 70-degree rise. According to the director of the Center for Security Analysis of Taiwan, Fu S. Mei (Fu S. Mei), deficiencies were found in areas such as turning radius, weight and armor protection. In 2008, CM-32 production was suspended due to the appearance of cracks in the armored hull. In March 2010 of the year, the Taiwanese newspaper “Apple Daily”, citing military sources, reported that CM-32 did not meet the requirements of ballistic protection, since during the shelling the bullets pierced the stern of one of the machines.

At the first stage, three prototype machines were produced: the P-1 and P-2 variants with turrets armed with the 25 and millimeter automatic ATK M242 Bushmaster cannon and the P-0 armored personnel carrier. The car then managed to reach a maximum speed of 110 kilometers per hour. It was powered by a CNpX C12 diesel engine with 450 horsepower and a seven-speed Allison HD40707 automatic transmission. Option P-0 carried a crew of three (commander, gunner and driver), along with six paratroopers. 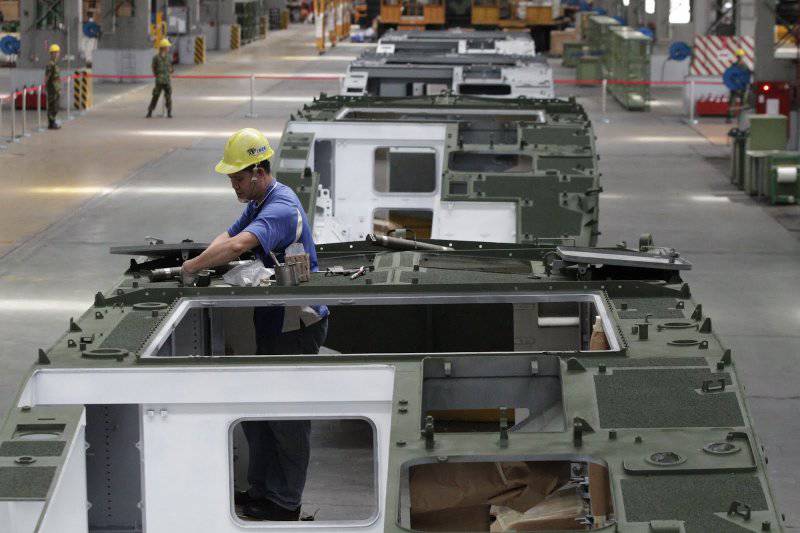 Initially, ORDC planned to make additional CM-32 options, including a medical car, a self-propelled mortar, a commander vehicle, an engineering vehicle, a mobile 105-mm artillery system with an M68A1 cannon with an 32 round of ammunition and a range of 2000 meters, as well as an air defense missile, armed with anti-aircraft missiles Taiwanese development Tien Chien (Air Sword).

"However, despite public statements, ORDC is not sure that it will be able to produce eight or nine additional options required by the army," said May. It is more than obvious that options like the 120-mm self-propelled mortar and mobile 105-mm artillery system will not be developed without the help of foreign contractors and major system suppliers (such as towers). "

In the meantime, negotiations were held with General Motors on the acquisition of Light Armored Vehicle-3 (LAV-3). GM introduced LAV-3 in 1994, 1997 and 2001 to "interested Taiwanese officials," a GM source said. Taiwan also discussed the possibility of a partial production of LAV-3 on its territory. Meanwhile, GM officials did not completely abandon this idea, but expressed great doubt that the deal would take place at all. 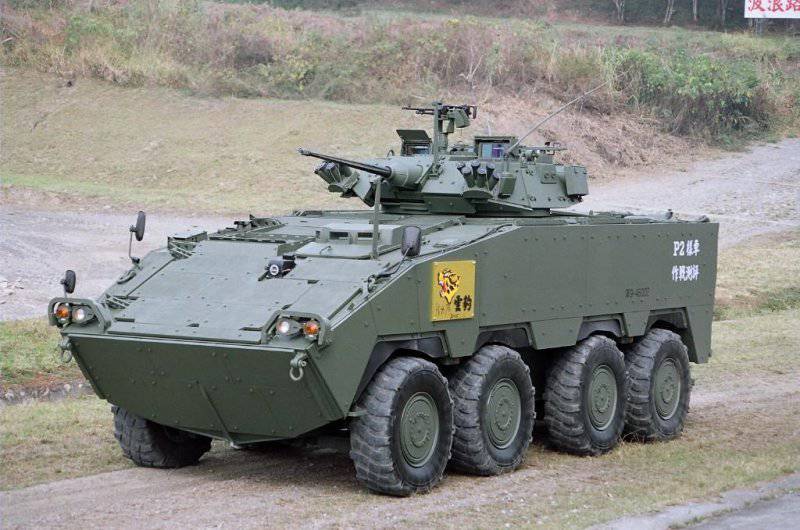 Like most armored vehicles, the CM-32 is designed with reinforced frontal armor protection and weaker side and stern protection. The front panel can withstand the fire of large-caliber machine guns, and the sides, roof and stern should protect the crew and troops from light rifle fire. weapons and artillery shell fragments. BMP is equipped with a fire extinguishing system, as well as a system of protection against weapons of mass destruction. The V-shaped hull should protect the crew from the effects of mines and improvised explosive devices. The machine can withstand an explosion up to 12 kg of TNT equivalent under any wheel. There is a tire pressure monitoring system that provides control of each individual wheel in order to adapt the car to a particular area or to provide tire inflation when they break through. There are two shops of five smoke grenades that can be used for offensive and defensive actions. 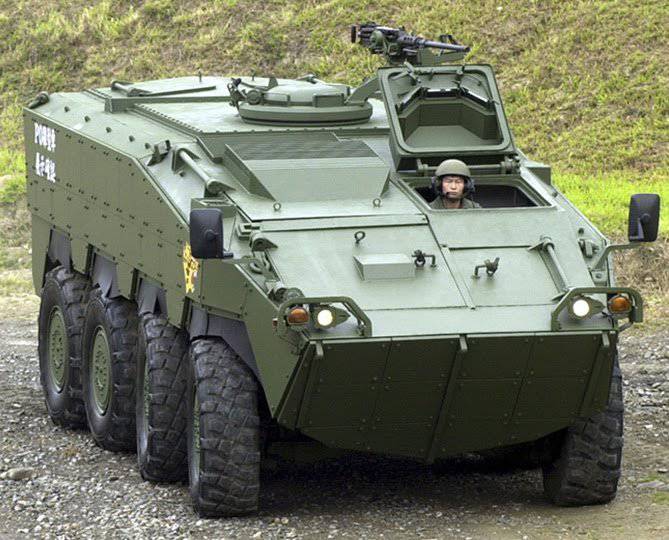 The power plant is located in the front right side of the hull, as in most modern armored vehicles. The driver is located in the front left of the car, and the engine is installed to the right of it. The troop compartment is located in the rear of the BMP, the turret is located in the rear part, and in the BTR variant up to eight fighters can be located there. The landing and landing of troops is carried out through the rear ramp or hatches in the roof. Front driver visibility is provided through a one-piece manhole cover and day periscopes. The centrally located daily periscope can be replaced by a passive periscope for night driving. The commander and gunner have a day / night sighting system. The use of rear-view mirrors installed in the front of the car is required when driving in a built-up area. The fully amphibious CM-32 is propelled on the water by two water cannons mounted on either side of the hull on the rear panel. She is able to reach maximum speed on the water in 8 km / h. Cruising CM-32 on the highway approaching 800 km. 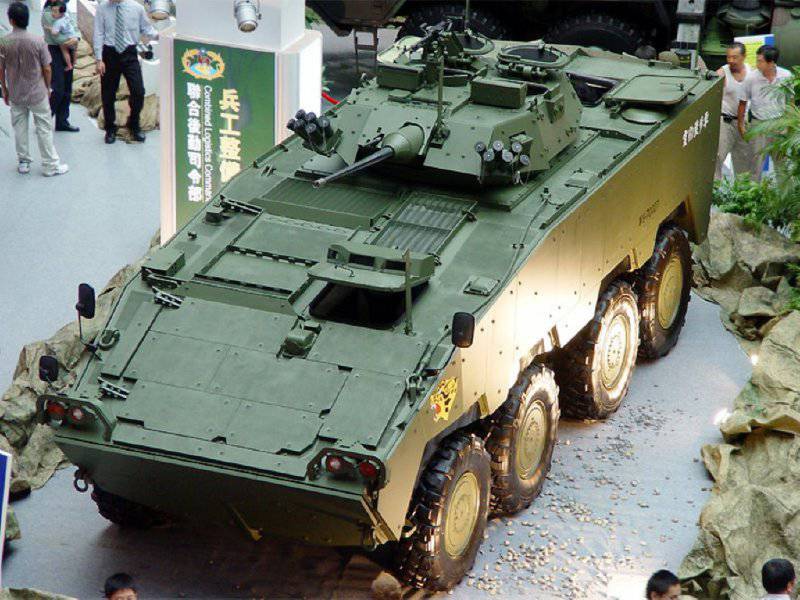 The CM-32's main weapon is the 20-mm automatic cannon and the 12.7-mm Browning M2 heavy machine gun. The CM-32 BTR is equipped with an 40-mm automatic grenade launcher and an 12.7-mm Browning M2 heavy machine gun. In the fire support variant, it is planned to install an 105-mm gun or an 120-mm mortar. Several machines were equipped with a remotely controlled weapon system including a machine gun and a stabilized 25-mm M242 cannon.

Purchasing plans were adjusted to 600 vehicles. However, the plans were constantly changing and until the 2017-2018 of the year, the army decided to adopt only 368 machines. In addition to the Taiwanese army, armored vehicles CM-32 are not used by anyone. 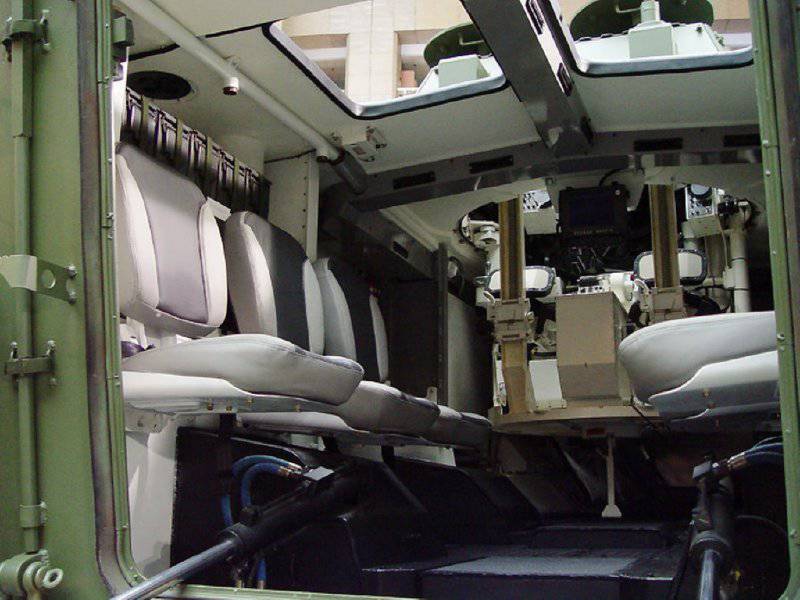 Ctrl Enter
Noticed oshЫbku Highlight text and press. Ctrl + Enter
We are
Overview of armored transporters and infantry fighting vehicles (Part of 4)Armored cars of the Piranyev family. Part II
9 comments
Information
Dear reader, to leave comments on the publication, you must to register.