The world does not make friends

November 23 2017
5
19 November 1977 of the year at 20 hours of the evening, the plane "Egypt-01" landed at Ben Gurion Airport. The head of the most powerful Arab state, Egyptian President Anwar Sadat, stepped onto Israeli soil under the fanfare of the military orchestra. He arrived to offer Israel to make peace. 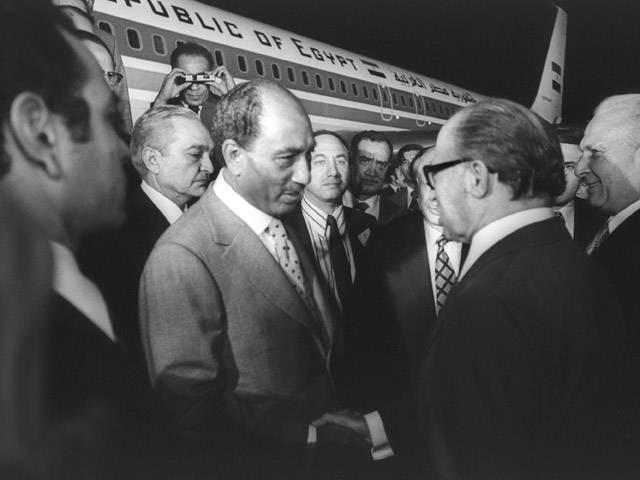 More recently, in 1967, thousands of thousands rallied on the streets of Cairo, calling on Sadat's predecessor, Gamal Abdel Nasser, to kill all Jews living in Israel. And the authorities eagerly kindled these sentiments. Sadat, who then held the post of chairman of parliament, was an integral part of the establishment that led the Arab world to the shame of the Six Day War.

The defeat of June 1967 only strengthened the hostile attitude of the Arabs to the "Zionist entity". At the call of Israel to make peace in exchange for all the territories that came under its control in 1967, the Khartoum Summit of the League of Arab States answered with a triple no:
No recognition of Israel!
No negotiations with Israel!
No peace with Israel!

In 1970, Nasser dies, and Sadat becomes his successor. The new leader of Egypt is perceived as a temporary figure, but he is beginning to purge the government from supporters of Nasser and is trying to rely on the "moderate" Islamists. Sadat is ready for an audit of the pro-Soviet orientation of his predecessor, realizing that ties with the West will bring much more benefit.

However, for serious reforms, the new president must wash off the shame of the Six Day War. October 6 1973, on the Day of Judgment, the Egyptian army, taking Israel by surprise, forcing the Suez Canal and inflicting significant losses on the IDF in the first stage of the war.

It doesn’t matter that the IDF then moved military operations to the African side of the Suez Canal, surrounded the 3-I Egyptian army and stopped at 101 one kilometer from Cairo. From the point of view of the Arabs, Sadat washed away the shame of his predecessor with Israeli blood. October 6, the day of forcing the channel, becomes a holiday of Egypt - and it remains to this day.

The second reason that made Sadat’s visit to Jerusalem possible was the “coup” of 1977, the coming to power of the Likud party, where Menachem Begin was in charge. The new prime minister was a supporter of a united and indivisible Israel, consistently speaking out against any territorial concessions to the Arabs. However, in his view, the Sinai Peninsula was not part of the Land of Israel.

But the main figure in the secret contacts between Israel and Egypt was Moshe Dayan, whom Begin offered the post of foreign minister. Public opinion considered Dayan to be the main culprit in the failure of 1973 of the year, the Doomsday War was one of the main reasons for the completion of the Worker's Party 30-year hegemony, but this did not prevent Begin from appointing Dayan to a key post in the government.

The foreign minister was the exact opposite of the head of government. However, Begin and Dayan treated each other with sympathy and respect.

Unlike many leaders of the Zionist movement, Dayan never looked down on the Arabs. He was fluent in Arabic, understood the Arab mindset, respected Arab culture and had nothing against when familiar Arabs called him not “Moshe,” but “Musa.” Those who knew him in his youth argued over who had more in it - a Cossack or an Arab gangster. Eshkol called him "Abu Gilda" - in honor of the most famous outlaw.

At the same time, in addition to charm and the ability to find a common language with everyone, Dayan was perceived as the best commander in the entire Middle East - which could not but earn the respect of the enemy.

In 1974, Golda Meir left Sadat’s secret message unanswered with a proposal to start peace negotiations. The new government of Israel has aroused much more interest. Negotiations were held simultaneously on two channels - through the mediation of the Romanian Secretary General Nicolae Ceausescu and the King of Morocco, Hassan II.

It took only a few months for the secret to become apparent. 9 November 1977 President Sadat proclaimed from the rostrum of the Egyptian parliament that he would be ready to go to the Knesset, in Jerusalem, to defend the Arab position.

The next day, the head of government announced that the Egyptian president would be received with all the honors. On November 11, he addressed the Egyptian people, calling for an end to wars and bloodshed, establishing an eternal peace between the two countries. The phrase "No more war, no more bloodshed" entered history, it was repeated several times by Israeli and Arab leaders.

"Citizens of Egypt! ... 29 years continues between us a tragic and unnecessary conflict. ... Four Israeli-Egyptian wars shed a lot of blood ... many families are orphaned ... There is no reason to continue this enmity. We extend to you a hand of friendship, and this is not a weak hand. In the event of war, we will once again be able to protect ourselves. So let's say to each other — enough wars. Stop shedding blood and threaten each other. Let's make peace, and not just peace, but build new friendships and honest cooperation. We can help each other.

... Your President Sadat said two days ago that in order to save the life of at least one of his soldiers, he is ready to come to Jerusalem, to the Knesset ... I will be happy to receive Anwar Sadat with all the honor and goodwill that both you and we inherited from our common forefather Abraham. "

November 15 Menachem Begin, with the mediation of US President Jimmy Carter, handed Anvar Sadat an official invitation, which was accepted. At the same time, there were voices both in the government and in the army circles, predicting that Egyptian commandos would jump out of the plane instead of Sadat - and they would kill the entire Israeli leadership.

But on the evening of November 19, the plane with the leader of the Arab world landed in Israel - of course, after the end of Saturday. Sadat was greeted with truly royal honors - it was clear to everyone that before their very eyes history is being decided. The next morning, the Egyptian president made a prayer at the Jerusalem el-Aqsa mosque, and by four o'clock they were waiting for him where he had promised to come - in the Knesset.

No one wanted to miss a historic event. For example, in the hall one could see the former premier Golda Meir, who at one time ignored Sadat’s message. Ministers could not hide the excitement. 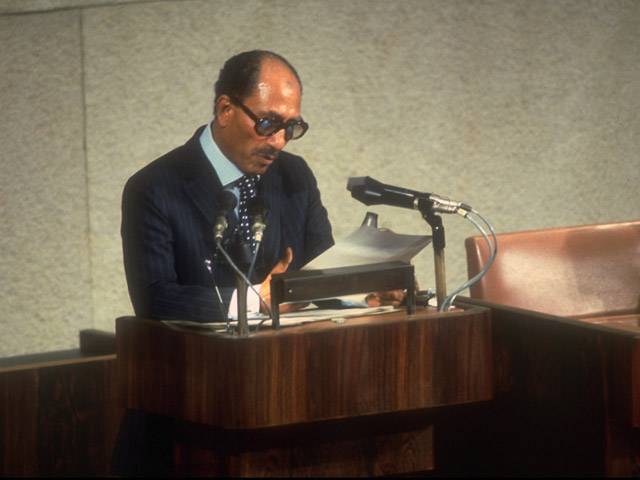 "My duty to Allah and the people of Egypt brought me here, to an enemy country, to offer you peace and good neighborly relations. I will leave this decision to you, and may Allah help you!"
- Said Sadat, adding that he is aware of the danger of his decision. He also said that the Arab leaders with whom he spoke tried to dissuade him from going to Israel.

The Egyptian President stressed that it is impossible to build your happiness on someone else’s misfortune. He stated that he insists on a comprehensive, not a separate peace.

In his reply, Begin expressed his admiration for Sadat’s courage. He also called on Syrian President Hafez al-Assad and King of Jordan Hussein to follow the example of the Egyptian leader. The Israeli prime minister stressed that the satisfaction of all Egyptian conditions is impossible, but he agreed that the resolutions of the UN Security Council should be the basis for a settlement.
Before leaving home, Sadat said: "We came to one important understanding - the Doomsday War was the last between us."
Begin, a moment before, said in his characteristic manner of public speaking, which made him think of eternity: "In Jerusalem, we vowed to continue to live without wars. This is a great victory for morality and morality."

Time magazine called Sadat the man of the year, but a visit to Israel did not bring any other visible achievements. Egypt, until recently the most influential country in the Arab world, turned into a pariah. The trip caused outrage not only foreign leaders, but also its own citizens.

The Egyptian President with courage and perseverance continued to follow the chosen course. The peace talks that took place at Camp David were repeatedly threatened, delegations even packed their bags - but March 26 March 1979, a peace treaty between Egypt and Israel was signed on the lawn of the White House. 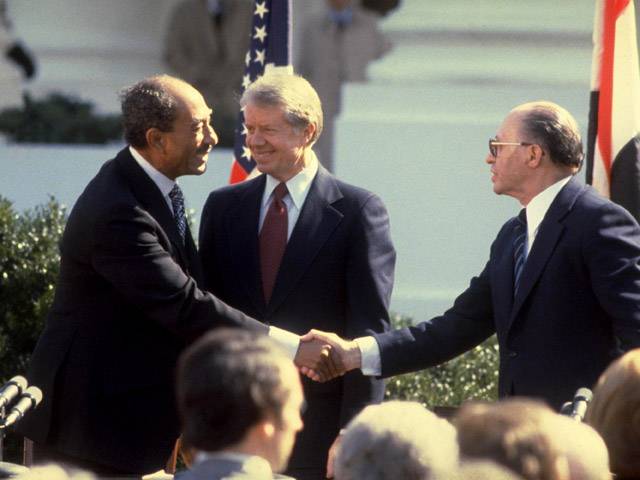 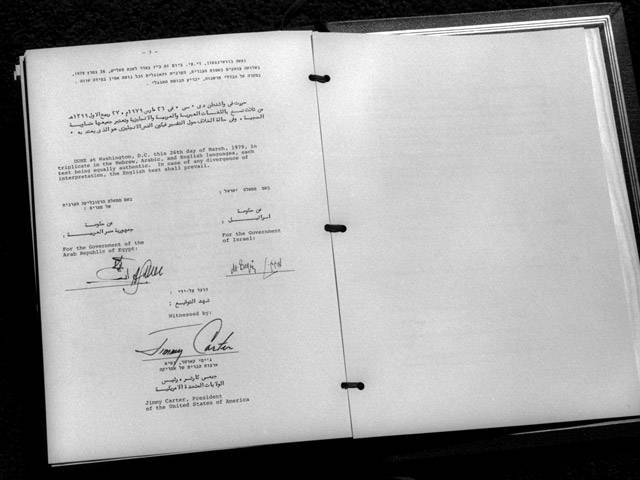 Contrary to the desire of Sadat, he became separate. But Egypt received the entire territory of the Sinai Peninsula, which became a demilitarized zone, and UN Resolution No. XXUMX was recognized as the basis for resolving the Palestinian problem. Israel recognized the right of Palestinians to self-government.

Anwar Sadat paid for life with Israel. 6 November 1981 of the year he was killed by Islamist servicemen during a parade to mark the eighth anniversary of the crossing of the Suez Canal.

His successor, Hosni Mubarak, did not denounce peace with Israel, but the relations between the two countries became much more formal.

Israeli settlements in Sinai were demolished, and the peninsula itself was transferred to Egypt after the death of Sadat. The central government failed to establish control over it. North Sinai has become a jihadist base fighting against the current government headed by Abd al-Fattah al-Sisi. Under Al-Sisi, a community of geopolitical interests led to a significant rapprochement between Israel and Egypt.

After that, Jordan concluded diplomatic relations with Israel. The ties of the Jewish state with moderate Sunni monarchies are developing according to a different model, remaining largely secret. However, it is clear that the signing of a peace treaty with Egypt, when the largest Arab country recognized Israel as an integral part of the Middle East, was the key for some and for others.

Based on the article by Pavel Vigdorchik "November 19: 40 years to Sadat's historical visit to Israel" http://newsru.co.il/mideast/19nov2017/eg_il_40_201.html
Quotes from Mark Bunny's Life of Begin

Ctrl Enter
Noticed oshЫbku Highlight text and press. Ctrl + Enter
We are
Throne of the pharaohs. Why Russia needs EgyptCollusion in Suez
5 comments
Information
Dear reader, to leave comments on the publication, you must to register.