A detachment of Pacific Fleet ships completed a visit to Thailand 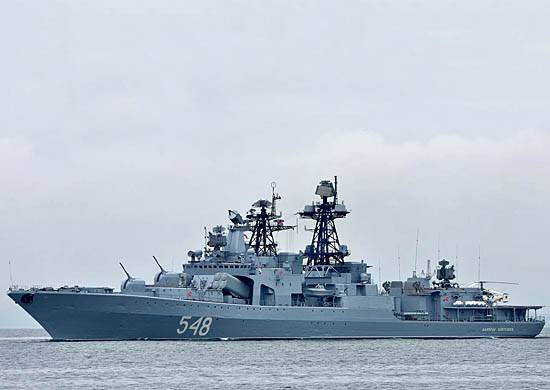 Today a squad of Pacific ships fleet (Pacific Fleet), consisting of the large anti-submarine ship Admiral Panteleev and the large sea tanker Boris Butoma, completed the program of an unofficial visit to the Kingdom of Thailand and left the main base of the Thai Navy Sattahip,
says release.

It is reported that "November 19 and 20 crew of the BOD" Admiral Panteleyev "took part in a naval parade, which was held in Thailand in honor of the 50 anniversary of the Association of Southeast Asian Nations (ASEAN), in which 25 combat ships from 18 were involved countries. " The Russian ship led one of the parade columns.

During the visit, BOD was visited by employees of Russian overseas agencies in Thailand; bus tours to Pattaya city were organized for the crew.

After leaving the base of Sattahip, the warship and the vessel providing the Pacific Fleet continued to carry out the tasks of the cruise.

Help press service: “A detachment of ships of the Pacific Fleet under the command of Deputy Commander of the Maritime Flotilla of disparate forces of Rear Admiral Edward Mikhailov left Vladivostok on a long-distance voyage of October 2. The hike is taking place in accordance with the plan of international military cooperation of the Armed Forces of the Russian Federation and will last about four months. ”