How Putin's rays of royal glory warm up: British opinion

November 21 2017
120
Vladimir Putin, who opens the monuments to the kings, is trying to catch a glimpse of the former royal glory. This writes the popular British newspaper «The Telegraph». 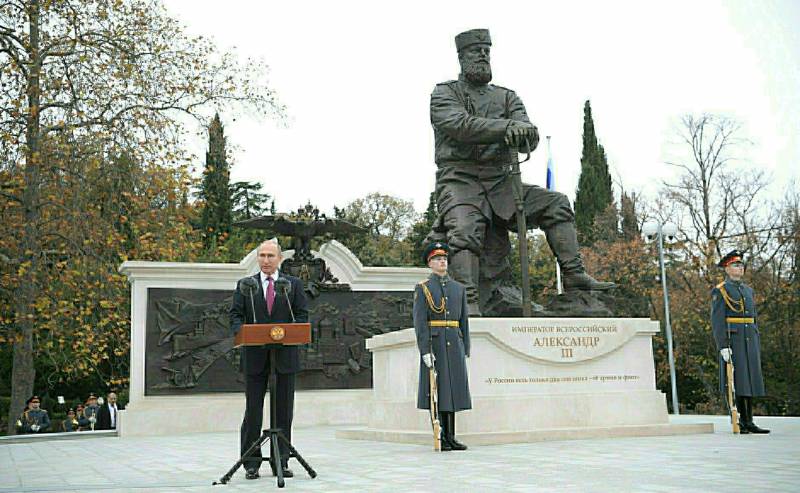 Vladimir Putin discovered a “giant” monument - a statue of Alexander III in the Crimea, Alec Lun writes in a newspaper "The Telegraph". In his speech, the correspondent points out, Putin drew a parallel between the rule of the “conservative king” and his own “18-year rule.”

The reign of Alexander III is honored in Russia after “the Kremlin ignores the 100 anniversary of the Russian revolution,” reminds a British journalist.

The said king was praised at the opening of the monument as "the ruler who brought peace, glory, development and stability." Officials in Russia often emphasize precisely “stability”: after all, the Putin presidency brought it to the Russians “after the chaos of the 1990's.”

President Putin also expects to earn honors for his “aggressive foreign policy, including the annexation of the Crimea in the 2014 year,” writes Lun.

According to Putin, Alexander III was called "peacemaker" because he did not lead large-scale wars and "gave Russia 13 years of peace" with his "hardness." It was also said that the king modernized the army and began the construction of the Trans-Siberian railway.

On the monument, the journalist reports, a statement was made that “is attributed to Alexander III among the people and is often quoted by Putin”: “Russia has only two allies: its army and navy”.

Internet users, however, ridiculed the “achievements” of the king, bronzed in the bas-relief. The fact is that the Tretyakov Gallery and Historical the museum in Moscow, presented on the bas-relief, was created several years before Alexander III took the throne. Also depicted here is Fedor Dostoevsky, who died before the accession of Alexander.

The publication indicates that this is not the first mistakes in Russian monuments. Earlier there was a noisy scandal depicting the scheme of the German assault rifle StG.44 on the monument to M. Kalashnikov, which was opened in Moscow in September.

As for the topic of “aggressive foreign policy” mentioned, including the “annexation of the Crimea”, other Western observers who visited the Crimea saw the sight and instead of “annexation” talk about “reunification with Russia”. For example, the Norwegian publisher Kirsten Engelstad through the newspaper "Aftenposten" suggested look at Russia and its policy with different eyes. In the autumn of 2017, Engelstad visited the Crimea and admitted: what the West calls “the annexation of Crimea by Russia”, the locals call it “reunification with Russia”.

Regarding the errors mentioned on the monuments, one thing can be said: negligence is spreading at a dismal pace in Russia, coupled with carelessness and illiteracy, both in terms of language and in relation to native history. It would seem that in our time, thanks to the Internet, you can verify any fact in minutes, or even seconds. But even this is not done. But the rush is needed when hunting for fleas, Talcov once sang ...

By the way, let’s add, the author of the monument, Andrei Kovalchuk, answered the inaccuracy allegations published in The Telegraph. “Normally perfectly, when the sculptor treats it a little bit differently”, - noticed he advised critics to "read materiel."

“There will be no alterations. Nothing contradicts. All this is absolutely authentic, with a light artistic look of the author. There is no wrong here, here is the actual truth. It's just that liberal-minded people are trying to see black not black, but gray, it happens, it’s absolutely normal, ”said Kovalchuk.

Ctrl Enter
Noticed oshЫbku Highlight text and press. Ctrl + Enter
We are
On the Poles and Soviet graves in Poland
120 comments
Information
Dear reader, to leave comments on the publication, you must to register.