November 22 2017
180
It seems that we have an antihero of the year. And he became them ... "penitent" student. Speaking in the Bundestag, a certain Kolya Desyatnichenko from Urengoy said that the Nazi soldiers "did not want to fight." In general, unfortunate soldiers after the "Stalingrad boiler" are now lying in unclean graves ... 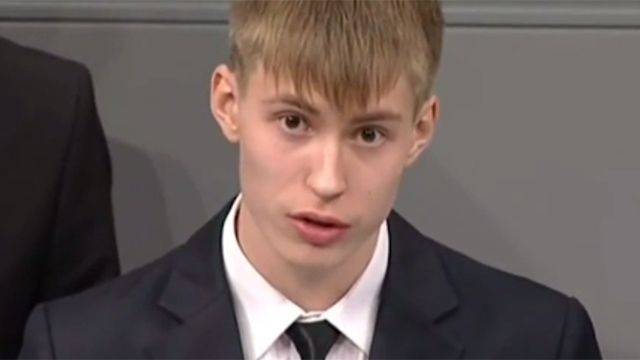 This “song” about “Wehrmacht's innocent killers” was voiced by the 19 boy in November at the central mourning rally organized by the People’s Union of Germany for the care of war graves. Wintershall, the sponsor of the school exchange project between the gymnasiums of Russia and Germany, became the other organizer of the event.

And this is not about some “ignorant”, but about one of the best students. He said that he had long been interested in history Germany that is looking for the history of German soldiers. And especially he was touched by the fate of one of them, named Georg. This was followed by the "touching" story of how the unfortunate fascist was surrounded in the "Stalingrad cauldron", and from there to the prisoner of war camp. He did not return from there, but died "from the harsh conditions of captivity." And the poor family of Georg learned about it only last year.

This is the story ... I wonder if this boy knows how many Red Army soldiers are missing? How many civilians were burned alive by such “unhappy Georgians”? And what was he taught at all in his family and school?

The young high school student added to his performance that he had visited German burial places near the city of Kopeisk. And there he was deeply moved: “This made me extremely upset because I saw the graves of innocent dead people, among whom many wanted to live peacefully and did not want to fight. They had incredible difficulties that my great-grandfather told me about. ”

Ironically, the performance of the young antihero had exactly on the 75 anniversary of the Stalingrad offensive operation. Yes, and on the eve of the anniversary of the Nuremberg process, which began on November 20 1945. And it shocked the citizens even more.

Unfortunately, the example of Ukraine shows that much more terrible things begin with such an excuse for enemies — torchlight processions, glorifications of war criminals, then desecration of monuments, and then murders of people follow, as in Odessa in the House of Trade Unions. By the way, from the post-Ukraine Ukraine there are again disappointing news - The second time this month in Kiev, the Eternal Flame was poured with cement ... It is unlikely that it will anger our pitiful boy Kohl, who is crying about the untidy graves of “innocent soldiers of the Wehrmacht”.

Of course, you can say that "the child has nothing to do with it." So he was raised by adults. The deputy of the Legislative Assembly of the Yamalo-Nenets Autonomous District from the Communist Party of the Russian Federation Elena Kukushkina said: “I am not more worried about this boy, but who was in charge of his project ... These things need to be nipped in the bud».

The mayor of New Urengoy, Ivan Kostogriz, for his part, called for an end to the persecution of the schoolchild, who called for "a peaceful existence throughout the Earth and rejection of war, bloodshed, fascism, suffering and violence as such."

Nikolay's mother justifies his son by saying that at the last moment his speech had to be cut from 10 minutes to 2's. As a result, "he was misunderstood." And she made this speech with her son together, and there was a story in her about her great-grandfather-veteran. Well, it was possible not to talk about the "innocent" fascists, but to tell about the great-grandfather. But in the end, they left words about the “poor” George, and not about the veteran who fought with these “Georgians”.

History has already reached the State Duma of Russia. Deputy Chairman of the Committee on Education and Science of the State Duma Boris Chernyshov said that the teachers did not work with the boy for his speech. "The prosecutor's office must figure out how and what the youth are taught, which organizations work in Russia“- said the deputy.

You can write off the performance of the high school student on the very "simplicity, which is worse than theft." But really, not only Kolya is to blame. Blame adults. And not only those who are directly involved with this particular teenager.

Blame "Ivana, not remembering kinship," which divorced a lot after the collapse of the Soviet Union. Those who invite various “political scientists” to the Russian television who openly justify fascism on the TV screen are to blame. Those who equate Stalin to Hitler, creating absolute confusion in the brains of the younger generation. Those who make controversial films, such as "Bastards", which show touching, but made-up stories. Those who put the topic of political repression above the topic of the feat of Soviet soldiers. All this confusion and generates speeches about "innocent German soldiers."

Kohl's particular boy can be reduced to the Piskarevsky cemetery in Leningrad (yes, we will call this city the very name by which he became famous for his resilience). You can "fill up" with his books - such as "Young Guard", "Street of the younger son", "The Unbowed", "Strong in spirit" and many others ... Arrange for him a film show with documentary films about the crimes of fascism.

But what to do with adults who in childhood probably read books, and watched movies, but cast dirt on the history of our country quite consciously and certainly not unselfishly? Finally, it is on them that the main fault lies with the fact that the younger generation takes a different attitude to what would seem to be unshakable.

Ctrl Enter
Noticed oshЫbku Highlight text and press. Ctrl + Enter
We are
To say “thank you” for the “innocently killed” Wehrmacht soldiers?A schoolboy from the Russian Federation in front of the deputies of the Federal Republic of Germany called the Nazi soldiers "innocent dead people"
Military Reviewin Yandex News
Military Reviewin Google News
180 comments
Information
Dear reader, to leave comments on the publication, you must sign in.