November 21 2017
85
21 January 1924, at the age of 53 years, Vladimir Ilich Ulyanov (Lenin) passed away. On January 23, the coffin with the body of Vladimir Ilyich in the baggage car was delivered to Moscow from the Gerasimovskaya platform (today Leninskaya) to the Paveletsky railway station. Then the coffin was installed in the Hall of Columns of the House of Unions, where for five days and nights an official farewell to the leader of the October Revolution took place. On January 27, the coffin with the embalmed body of Lenin was installed in a specially constructed Mausoleum on the Red Square.


The leadership of the Soviet state preoccupied itself with the fate of Lenin's body before his death. Already in the autumn of 1923, a meeting of the Politburo was held (consisting of Stalin, Trotsky, Kalinin, Kamenev, Bukharin and Rykov), at which Stalin told that Lenin's health had seriously deteriorated and could be fatal. In this regard, he announced that there was a proposal "by some comrades from the province" in the event of Lenin's death to subject his body to embalming. Trotsky, who considered her “insanity,” Kamenev, who condemned her as “clergy,” and Bukharin, who was against attempts to “exalt the dust”, spoke out against this idea. But after the death of Lenin, none of them spoke openly against embalming the leader's body.

A large number of post-Soviet historians believe that the idea of ​​not burying Lenin, but embalming his body belongs to Stalin, and they see the roots of this idea in the desire of a number of Bolsheviks to create a new religion for the proletariat that won the revolution. According to some historians, Joseph Stalin was already about to restore historical paradigm, giving the people the king in his person and God in the person of Lenin. Whatever it was in fact, the body of Vladimir Lenin was embalmed and exhibited on Red Square in the Mausoleum specially built for these purposes. Moreover, the monument-tomb of the leader was rebuilt several times. The modern Mausoleum has existed since 1930, while at the same time it has undergone changes and restructures. 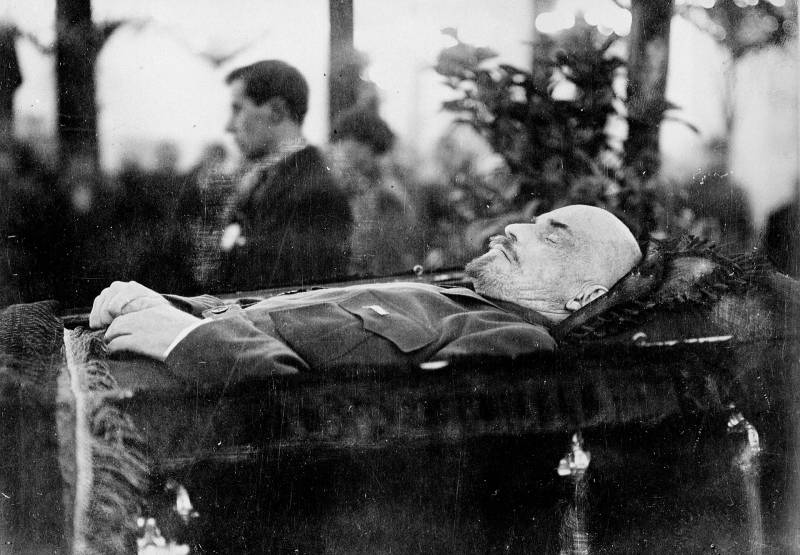 Lenin's body in the House of Unions

After the collapse of the Soviet Union, the question of the need to bury Lenin’s body rises almost every year, but so far this has not been done. According to the latest VTsIOM polls conducted in the spring of 2017, the majority of Russians believe that Lenin’s body should be buried. So says 60 percent of respondents. There is every reason to believe that, over time, the body of the leader of the revolution can indeed be buried, but so far it remains in Red Square.

When the Bolsheviks decided to embalm Lenin’s body and put it on public display in the Mausoleum, they could hardly have imagined that the body of the leader of the revolution would become a target for those disgruntled by the Soviet authorities and the terrorists, but that’s what happened. They attempted to assassinate Vladimir Lenin while he was still alive, but after his death, his body also didn’t find peace; in the USSR several attempts were made directly on the corpse. He was fired from a revolver, thrown at stones, tried to use a sledgehammer and a rocket launcher, smashed a sarcophagus with his foot and tried to blow several times, while occasional visitors died and were injured during the explosions.

The first attempt on the body of the already dead leader was 19 March 1934 of the year. The peasant Mitrofan Nikitin, a worker at the Progress state farm near Moscow, tried to shoot the body from the revolver of the Nagant system, he twice shot at the figure lying on a pedestal, but overwhelmed both times with excitement. Seeing that visitors and security officers were heading for him, he committed suicide by discharging the revolver into his heart. From the note found at his body, it was possible to find out that the peasant went to a desperate act in protest against the impoverishment and ruin of the simple villagers of a huge country. In a note, he wrote that in the spring of 1934, a large number of people would die of hunger, epidemics, and filth again. In the note, he asked if the Kremlin really didn’t see that the people didn’t want such a life and could not continue living so unbearably. Mitrofan Nikitin noted that he works with 13 years and is ready to do anything for the sake of truth. “Where did you lead the country?” What are you doing? After all, everything is rolling on an inclined plane into the abyss ... ”Such questions were also voiced in the anti-Soviet message found with him. 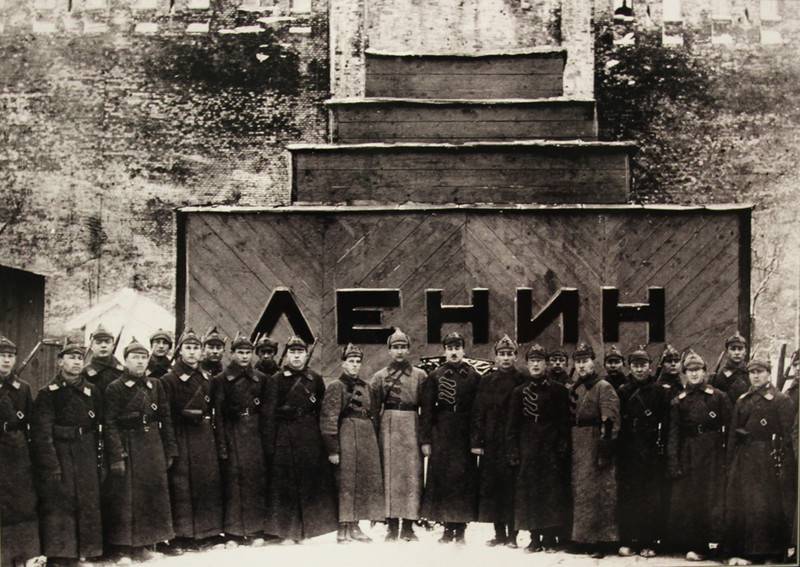 Guard of the 1 th Soviet United Military School of the Red Army named after the All-Russian Central Executive Committee at the temporary mausoleum, 1924 year

The next assassination attempt on Lenin’s body occurred a quarter of a century later in 1959. One of the visitors to the Mausoleum, having brought a hammer brought from behind his bosom, hit them with a sweep on the sarcophagus so that the thick glass could not stand and cracked. The man was quickly tied up and subsequently recognized as mentally ill. In the future, the assassination of the body and the memory of Vladimir Lenin only increased.

Less than a year, and already in July 1960, another attempt on the body of the leader of the October Revolution occurred in the Mausoleum. Tatarin Mininbayev, a resident of the city of Frunze (today Bishkek, the capital of Kyrgyzstan) jumped onto the barrier and managed to break the glass of the sarcophagus with a kick. The glass cracked and fragments damaged the skin of embalmed Lenin. As a result, the Mausoleum had to be closed for a long time to carry out the necessary restoration work. In addition to restoring the skin of the mummy, additional embalming of the body was carried out. The mausoleum reopened the doors to visitors only 15 August 1960 of the year. At the same time, Mininbayev himself faced a difficult choice then, on whose body should he attempt to encroach. Then the body of Joseph Vissarionovich had not yet been taken out of the Mausoleum, but in the end the man chose Lenin. Later, as part of the investigation, he admitted that he had been carrying out a plan for the destruction of the coffin with Lenin’s body since 1949, which is why he flew in specially from Uzbekistan to carry out his plan.

The next attempt on the memory and body of the leader occurred on 24 on April 1962, when Stalin’s body was already reburied. A retired accountant from Pavlovsky Posad by the name of Lyutikov threw a stone into the sarcophagus with a body, but did not break it. Before committing "blasphemous actions", Lyutikov wrote anti-Soviet letters to central Soviet newspapers and embassies of Western countries for two years. A month before Lyutikov 25 in March 1962, the mausoleum was visited by L. Trekhalin, a resident of Stavropol, who approached the expression of her citizenship with more originality, the woman carried a loaded rocket launcher with a cocked hammer under her coat. She was arrested the moment she tried to shoot her into the sarcophagus. 29 March 1966, another attempt was made to destroy the sarcophagus with the body of Lenin with improvised means. Pensioner Vatintsev G.V. 1907, born in the Labinsk District of the Krasnodar Territory, did not think of anything better than throwing a sledge hammer into the sarcophagus. 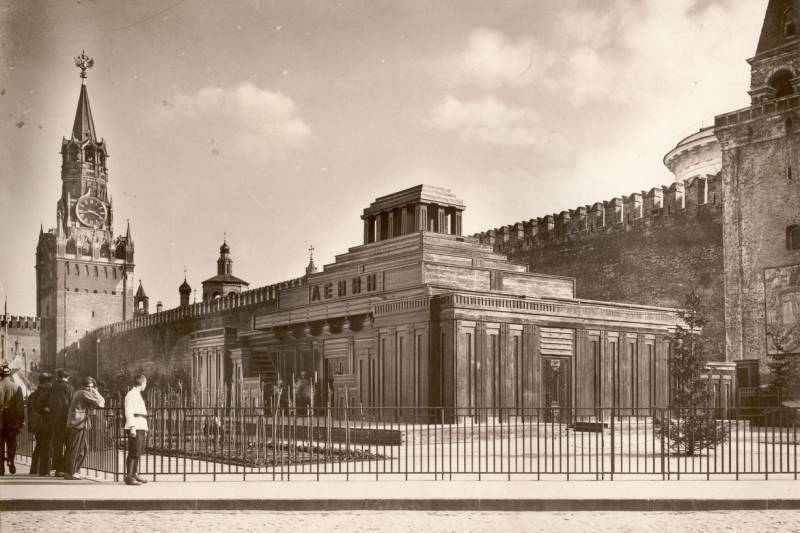 All these incidents could be considered insignificant. They were crossed out by two acts of terrorism arranged in 1967 and 1973. The first explosion at the Mausoleum occurred in September 1967. Lenin’s body did not suffer then, but for the first time people were killed. The terrorist act was committed by a resident of Kaunas, a certain Krysanov. Apparently, he blew up the "death belt" near the entrance to the Mausoleum. This is how Zaborozhskiy photographer Burbovsky, who was on a business trip in Moscow, described this attack. “At first, everyone was just taken aback. Then the audience rushed from the scene of the explosion scattered. When the flow of people has subsided, I look: a guy has passed by me, picks up his trousers - he has blood running down his legs. The military carried the girl - her leg was almost torn off and dangling. Before entering the Mausoleum there was a man with guts turned outwards, and next to him was the second guy, over whom several people had already bent, apparently, he was seriously wounded. Then I started shooting. ” How many victims and injuries there were as a result of this terrorist attack is unknown. The performer absolutely exactly perished, and in the newspaper “Trud” it was already noted in our time that the tourist from Italy, who had her legs blown off by an explosion, most of all got.

An even more terrible terrorist attack occurred in the 1 September 1973 of the year. The explosion directly inside the building killed 3 people, including the terrorist himself, four others were seriously injured (they were all schoolchildren). On this day, an unknown attacker, hiding under his clothes a pre-made explosive device, together with a large group of children (the influx of children was associated with the Day of Knowledge) passed inside Lenin's Mausoleum. The guards took the man as a school teacher, letting him pass inside with her children without difficulty. Having reached the sarcophagus with the body of Lenin, the man connected the wire contacts on an improvised explosive device, which provoked an explosion.

Later it turned out that the main force of the explosion fell on the sarcophagus with the body of the leader of the revolution, but by that time it had already been safely hidden under the thick armored glass and remained intact. At the same time, a terrorist himself and a couple from Astrakhan, who followed him, were killed by an explosion on the spot. Also, four school-age children were seriously injured, and a soldier of the Kremlin regiment, who was guarding the sarcophagus with the body, was thrown off by a blast wave. As a result of the explosion, there was practically nothing left of the terrorist, only a fragment of the head and his hand were found in place. Scraps of the documents found testified that he had previously been sentenced to 10 years in prison, but it is still not certain whether these documents belonged to the deceased, as his identity has not been established. 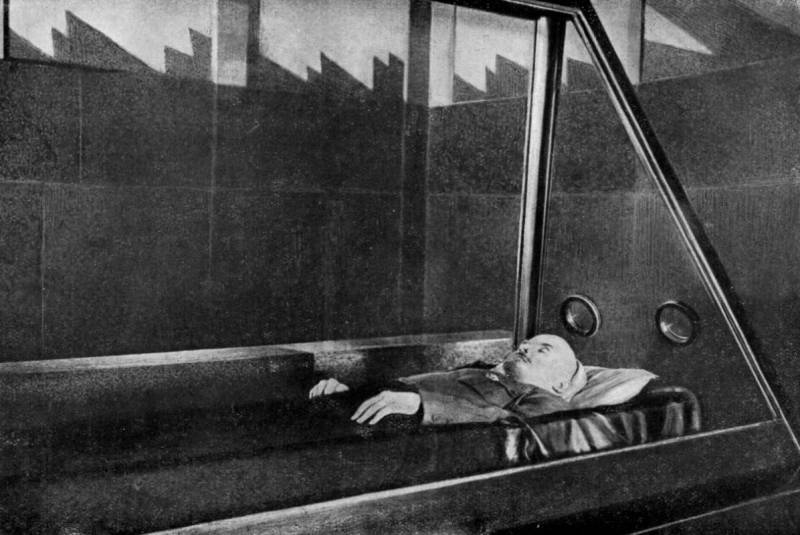 The heads of security agencies promptly arrived at the scene of the terrorist attack: Chairman of the USSR KGB Yuri Andropov and his first deputy Georgy Tsinev, as well as General Sergei Shornikov, who is the commandant of the Kremlin. The main version of the investigation was the version of a maniac who decided to perpetuate himself with such a terrorist act in the Mausoleum in the center of the capital, but did not lead to any results, the terrorist was not identified, and his true motives remained unidentified.

In the future, serious terrorist attacks and incidents in Lenin's Mausoleum no longer occurred. However, from time to time people in Red Square defiantly tried to commit suicide. Especially many were among them "samozhozhzhentsy. So in the 1970-1980 years, such an agonizing death here tried to take on the order of 100 people. All records were broken in 1981, when security officers prevented 17 from attempting to self-burn immediately.

Today Lenin’s Mausoleum and the honorary necropolis located near the Kremlin wall, as part of the Kremlin and Red Square, are included in the UNESCO World Heritage List, they also belong to historical and cultural heritage sites of federal (all-Russian) significance. Anyone can visit the Mausoleum on Tuesdays, Wednesdays, Thursdays, Saturdays and Sundays from 10: 00 to 13: 00, Monday and Friday are days off. Access to the Mausoleum, as well as to the graves located near the Kremlin wall, is carried out through the checkpoint near the Nikolskaya Tower, all visitors pass through the framework of metal detectors. In this photo and video inside the Mausoleum is prohibited. 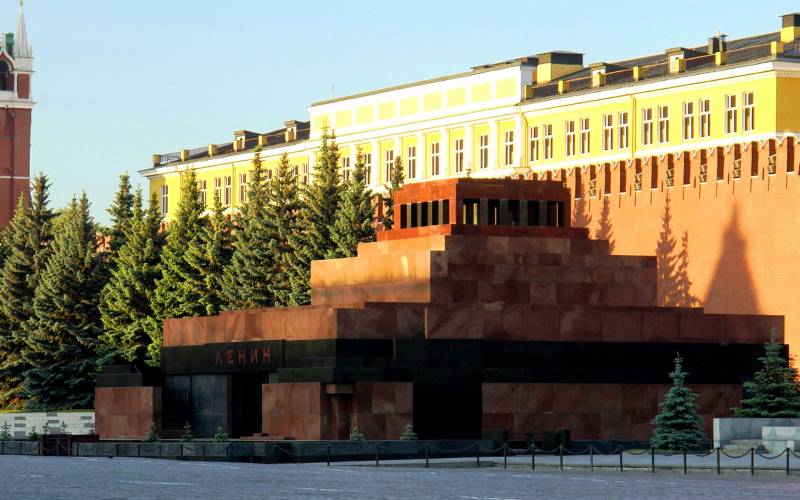