Transcarpathia is marching to Hungary 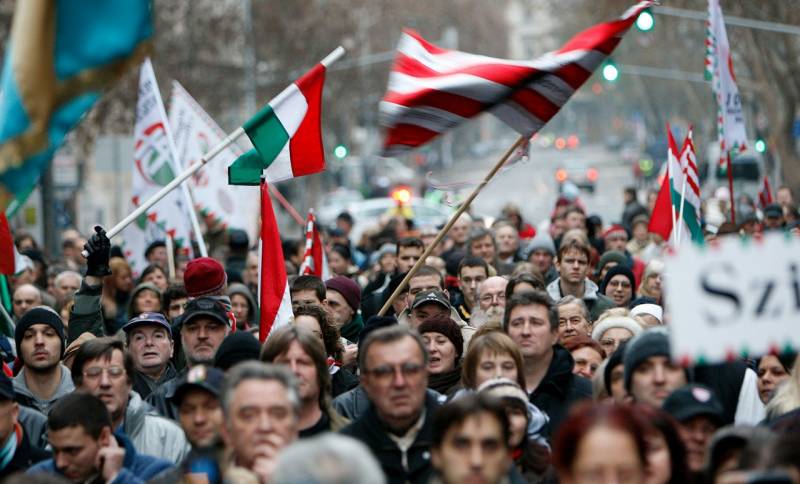 Perhaps everyone has already heard at least the echoes of the scandal that erupted after the Kiev regime adopted the odious "Law on Education" prohibiting schooling in any language other than the state. I’ll draw attention to only one thing - Kiev is poisoned most consistently by Hungary, which has never been seen to be critical in its neighbor.

Interestingly, the first state to receive visible benefits from the Maidan, was Romania. Before that, the “quiet gray mouse” after the first Maidan obtained from Yushchenko a voluntary consent to consider territorial claims and agree with the decision of the European Court. After a brief trial, without much noise, a part of the Black Sea shelf with small oil and gas deposits was transferred to a neighbor.

We will not be distracted by questions about why Yushchenko has not yet been condemned in Kiev under the article not an assassination attempt, but the real destruction of "the integrity and borders of the state" - he did not give the Russian shelf, but a member of the EU and NATO.

Hungary is also a member. The same organizations. Friend, partner and other, other, other ...

And while not too hurt Kiev. Well, yes, the December summit of Ukraine-NATO broke Budapest. But everyone understands that there is no real exhaust from this meeting - NATO weapons will not give, will not give money and in the structure will not accept. So the damage tends to zero.

Yes, the day before yesterday, Hungarian Deputy Prime Minister Zsolt Shemien, commenting on the granting of Hungarian citizenship to residents of Ukrainian Transcarpathia, said that from the point of view of Budapest, Hungarians living in the region have the right to autonomy. So what? Rusyns are also recognized in all European countries as a minority and have a certain status and benefits. And in the same Transcarpathia, Kiev does not consider them to be people, and 26 doesn’t see years of emphasis. Similarly with the Hungarians. Well, they will even be given autonomy in a couple of districts of the region, and? That's what really lose Kiev? That's right, nothing.

In order to understand why spears are being broken, a notch should be made to the memory that the current Kiev regime relies only on far-right nationalists. No supporters are not that pro-Russian or leftist, and even just centrists, today have no words. The refusal of Bandera, Shukhevych, 14 of October and the "eternal struggle with Muscovites" is unthinkable - other forces do not support this regime.

But the problem is that two nationalism in the same territory do not survive. The same Hitler worked perfectly with the Italians and the Japanese, as he did not encroach on their sphere of influence. And Kiev and Budapest have a “Transcarpathian problem”.

Skiing there probably retained wonderful impressions of nature and the locals. Goodwill and penny services are great. But few people know what Transcarpathia really is.

From the first days of the collapse of the Union, I had to work in Transcarpathia. And drive cars from the border, and trade in factories - it was different. And in a small-caliber revolver on the ankle to walk, and with a machine gun in an embrace to sleep. There it was very bad with the laws in 90's, it became even worse now.

My first visit there in 92 began with a joke - tired and in a broken car at night I tried to explain myself to the locals, first in Ukrainian, then in Polish. They answered me only after the Russian abusive - very benevolently. And they helped. Is free.

By the way, even then there were not forwards dollars, but forint. Having stayed late after midnight more than once, I was taken to a "brother-svatu" in Hungary to try "his" wines - right through the garden. The region lived and lived by smuggling and cross-border exchanges, kinship ties and nepotism. The rich and those who have managed to stick to something are chopping up the Smereka (local spruce) and are driving the train to the EU, although formally it is forbidden to cut and export. Who is "poorer" - drives cigarettes on his hump or waggons - who studied for what. The poorest, and most of them, go to Hungary or further to earn money, leaving children, wives and old people at home.

As a result, the village died out. Female alcoholism is terrifying. For a quarter of a century that I had to watch all this, the cycle is defined. Men bring money and build a new house, while old men and wives are raising children. Postarev, move into it, and the grown children leave for work. Not all return and the village dying out.

Interestingly, the same local people did not want to work in factories built for them in Soviet times. He saw with his own eyes the burnt-out boxes of workshops burnt by the locals. They were not satisfied with the absence of days off on their religious holidays - and there were always a lot of believers. Catholics. Now seniors remember the times of the USSR with nostalgia: “Always there was a penny in my pocket and fish in rivers — in!”

But what the locals have not changed since that memorable 92 year for me is the attitude to the "neighbors". Curious by nature, I was not lazy everywhere to ask about relations with the Galician, who live nearby - through the pass. Briefly answer: "No relationship". If you insist, they are angry and they say: "We will blow up the tunnels, fill up the passes and go to Hungary together with these mountains."

Well, the mountains there are more imaginary, but the attitude towards Banderovites is very negative. By the way, this is unchanged from the time of Austria-Hungary - Transcarpathia and Galicia are completely different.

Characteristic touch. In 1992, I saw a hefty stone walker near a bridge. An inscription was stamped over the fresh fresh flowers on it that it was a memorable sign of the victory of a Magyar colonel over the Ukrainian army in a god-forgotten year.

Since then, the attitude towards the Galitsai and Kiev has only worsened. Local residents living by the border and tourists do not really see any “gesheft” from the central authorities. What is important, in this case, the nationality does not play a role - they live by the border and have nothing to do with the "Hungarian nation". Families here have large, family ties they support, all of them have a Kum-Swat brother who feeds abroad or at the border. Or tourists, at worst.

And local residents see how power has weakened in Kiev. They see strife and vacillation, they are discussing with might and main that it will be the best way for everyone to fill up the passes - Hungary "will take us with earth and sky"

If we do not forget that local nationalism is growing with the flow of Afro-Asian migrants to Europe, and it is the proponents of national values ​​that are quickly gaining strength, it is not surprising that several hundred thousand ethnic Hungarians and half-breeds in Transcarpathia sleep and see themselves in Vegria . Without moving from the place.
Like 99, the percent of residents who have nothing to do with this nation, but who want to go to the EU tomorrow with a house and a goat. With all the consequences ...

For this, one percent of the officials and patients for the head of Maidan patriots, they will easily “lose” in the local hills.

By the way, and in April next year in Hungary elections ...

Ctrl Enter
Noticed oshЫbku Highlight text and press. Ctrl + Enter
We are
Our shelfSituational analysis of the death of the MH17 flight (Malaysian Boeing 777), made on the basis of engineering analysis from 15.08.2014
31 comment
Information
Dear reader, to leave comments on the publication, you must to register.