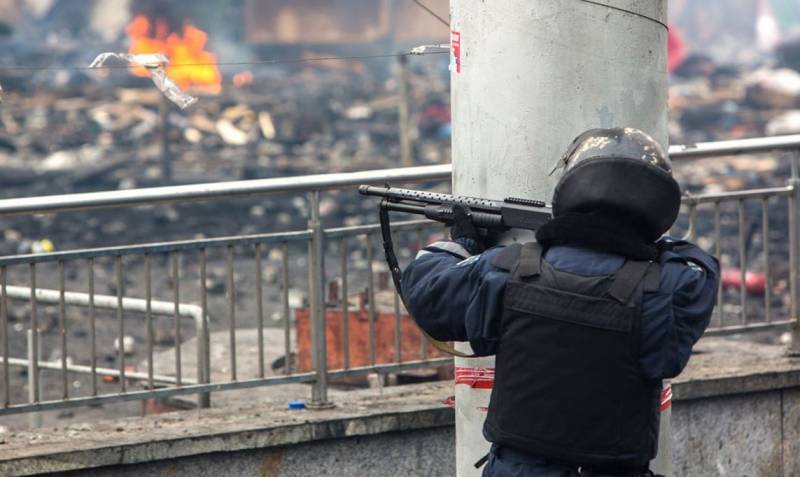 The Italian information resource Occhi della Guerra (Eyes of War) published a sensational video-recognition of three Georgian citizens that killing policemen and demonstrators during euromaidan in February 2014 of the year was their handiwork.

The video taken by the Italians is entitled “Ukraine. Hidden truth. They say snipers Maidan "and passed" unnoticed "by the Ukrainian media.

Similarly, the Ukrainian press tried to ignore the confessions of Estonian Foreign Minister Urmas Paet, who told by telephone to the High Representative of the European Union for Foreign Affairs and Security Policy Catherine Ashton that the Berkut employees and demonstrators were killed from the same weapons. However, while the Ukrainian court media were shouting at every corner that Paet’s and Ashton’s talk was montage, Paet himself acknowledged the authenticity of the audio recording. All this was “forgotten”, but now there are confessions that “forgetting” is more difficult.

The Italian journalists managed to meet with euromaidan snipers in Skopje, the capital of Macedonia. Koba Nergadze, Kvarateskelia Zalogi (here, probably, the Italians could not properly transcribe the Georgian name and surname) and Alexander Revazishvili (the Italians met with him in another country, not in Macedonia) are connected with the former President of Georgia Mikhail Saakashvili, the first two were his guards . All three were recruited at the end of 2013 year, Mamuka Mamulashvili, the future commander of the Georgian Legion in the group of Ukrainian troops in the Donbass.

The task of Revazishvili was to find a vantage point for shooting, the task of Nergadze and Kvarateskelia was to shoot. “We arrived by plane 15 in January, they gave me my passport and one more, with my photo, but with a different name and surname. They gave us 1 a thousand dollars and promised 5 thousands more later, ”Kvarateskelia recalls.

“Our task was to organize a provocation in order to force the police to attack the crowd. But until mid-February [the demonstrators] had few weapons. They used only Molotov cocktails, shields and sticks. February 15 Mamulashvili personally came to our tent. With him was another man in uniform. He introduced him and said that this was an American military instructor. The American's name was Brian Christopher Boyenger (Brian Christopher Boyenger), this is a retired sniper of the elite 101 airborne division of the US Armed Forces, ”Revazishvili admits.

Later, Brian Boynger will fight in the Donbass as part of the Georgian Legion, about which Mamulashvili speaks quite openly.

"We were constantly in contact with this Brian ... I had to follow all his instructions ... After a few days Pashinsky arrived (Sergey Pashinsky from March to June 2014 of the year - acting head of the presidential administration Poroshenko. - Ed.) And with him three more people among which was Parasyuk (now a deputy of the Verkhovna Rada). They brought weapons to the Ukraine Hotel, ”recalls Nergadze.

According to Koba Nergadze, February 18 Mamuka Mamulashvili told him: it’s time to shoot, you shouldn’t let it come to the election of a new president. Where to shoot - it does not matter. Together with Mamulashvili at that moment there were some two Lithuanians.

“It didn’t matter where to shoot: at the tree, at the barricades, or at those who had Molotov cocktails in their hands. The main thing was to wreak havoc, ”Nergadze says. According to him, the Lithuanians also fired: “They opened the window, then one of them shot, and the other closed the window. In total, they made three or four shots. ”

Nergadze's words are indirectly supported by the testimony of euromaidan activist Vladimir Venchak. In June, 2017, at the trial of the shooting of protesters, Venchak, speaking as a witness, said: "I received my first wound in the back, but not from the government quarter ... but from the Ukraine Hotel ... We saw the windows in the hotel operators are standing ... the windows were open, there were some people, and we felt that there was a fire in the back from that side. ”

When the wounded and killed were brought into the Ukraine hotel, the snipers quickly left it. “The victims and their murderers were nearby,” sums up the Italian edition.

How true and accurate the confessions of Georgian snipers are remains to be seen. However, the version about the shooting of the employees of the “Berkut” and the demonstrators by the same people from the same weapon, according to the same order, is increasingly confirmed. And today in the West, the events of four years ago in Kiev and their consequences are quite different. The mirages of the bloody “revolution of dignity” are dissipating one after another.

From the coup d'état in Kiev, accomplished in February 2014, every “romantic” fleur flew completely and completely. How long will this regime last, established as a result of bloody provocation, violence, lies, and extended its power to Ukraine?

Ctrl Enter
Noticed oshЫbku Highlight text and press. Ctrl + Enter
We are
What you didn't want to know about EnglandNikolay Silaev, Andrei Sushentsov: Georgia after the elections and prospects for Russian-Georgian relations
Military Reviewin Yandex News
Military Reviewin Google News
28 comments
Information
Dear reader, to leave comments on the publication, you must to register.